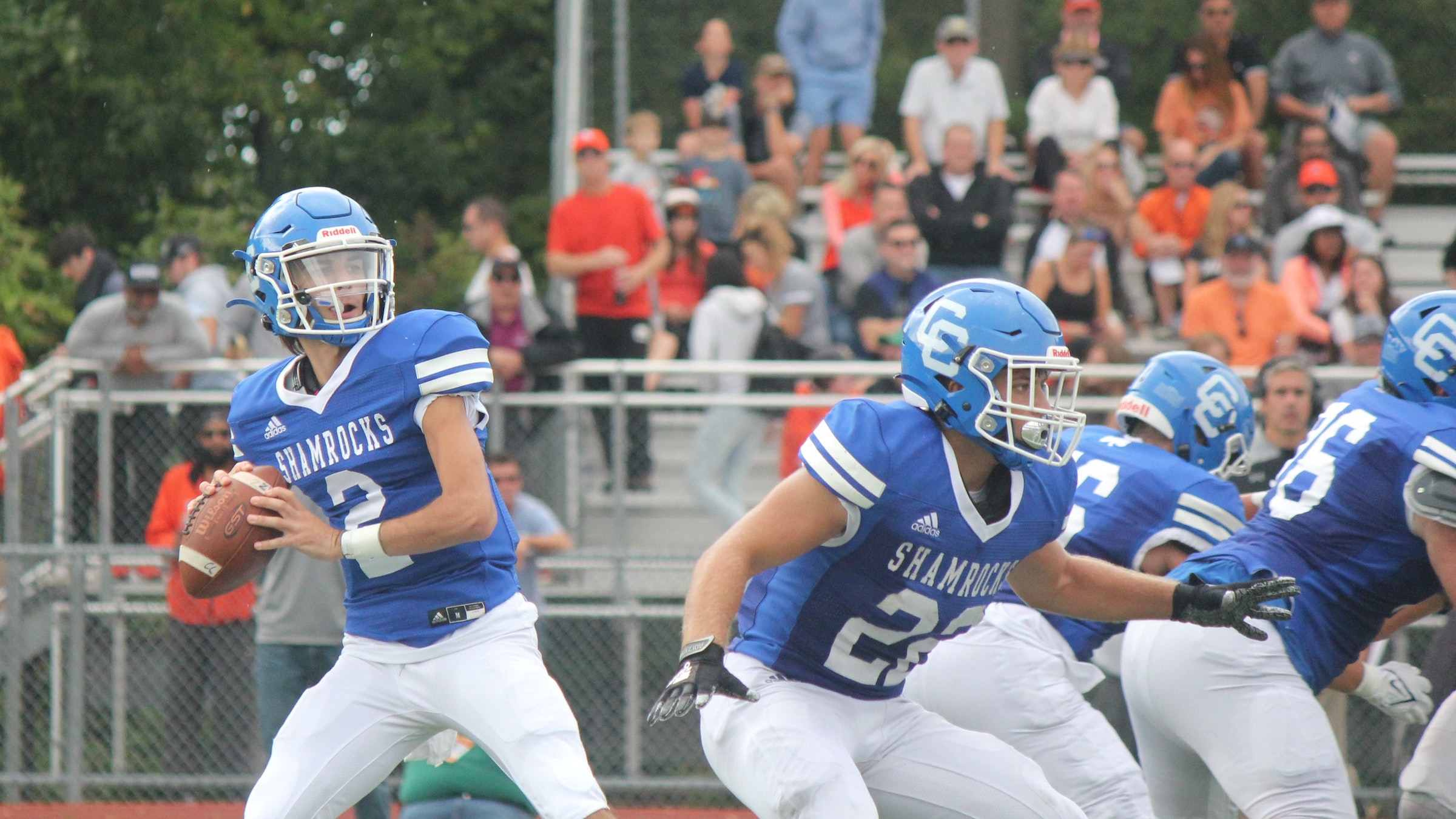 Detroit Catholic Central quarterback Declan Byle prepares to heave the ball during the second quarter of Sunday’s Boys Bowl. The result of this play was a 74-yard touchdown pass to Owen Semp, which put the Shamrocks ahead, 17-0. (Photos by Wright Wilson | Special to Detroit Catholic)

NOVI — When Novi Detroit Catholic Central’s offense first touched the ball during Sunday’s Boys Bowl contest, the Shamrocks were backed up on their own 5-yard line. But quarterback Declan Byle and his teammates didn’t even flinch.

“When you need 95 yards, you don’t need to get the 95 yards on one play,” he said. “You execute each play and do the best you can on each individual play. We did that, and it led to the points.”

Completing three long passes during the four-minute drive — including the final 43 yards to Kameron Davenport for the game’s first touchdown — Catholic Central set the tone for the rest of the day, rolling to a 30-7 victory over archrival Bloomfield Hills Brother Rice.

“I think it’s important for any quarterback to get those first few throws in and realize the offensive line’s going to give you the protection you’re going to need,” coach Dan Anderson said, “I think (Declan) was very comfortable in the pocket today. I thought our offensive line did a really nice job protecting him.”

It wasn’t the only time CC started a drive with poor field position Sunday afternoon, but more often than not, the Shamrocks found a way to make things work.

“We practice those situations all the time,” Anderson said. “Every day we practice we’re backed up offensively or we’re in different situations, and so they’ve done it, you know.”

On the next drive, Catholic Central started at its own 8, but moved the ball far enough ahead for a 37-yard field goal from Lucas Mosone.

In the second quarter, Byle later fired off a scoring pass to Owen Semp that covered 74 yards, as the Shamrock lead stretched to 17-0 by halftime. After the break, Spencer Lyons and Mo Jaffer added 1-yard touchdown runs as CC went up by 30.

Anderson also credited his defensive front seven, which kept the Warriors scoreless until midway through the fourth quarter, on Cole Lacanaria’s 12-yard touchdown reception from backup quarterback Mark Gojcaj. The starter, Hunter Polonkey, left the game in the first quarter with a broken collarbone.

“Obviously, offensively we have a different game plan if Hunter’s in the game, but that doesn’t do anything about the 30 points we gave up on defense,” Brother Rice coach Adam Korzeniewski said. “We gave up a lot of big plays and it just snowballs — they lose confidence and maybe they feel we can’t believe as we did.”

The loss eliminated Brother Rice from a berth in the Catholic League’s Prep Bowl championship, scheduled for Oct. 23 at Detroit’s Ford Field. The top team in the Central Division will play the top team in the AA Division for the Bishop Championship; the Intersectional 1 and 2 winners will meet for the Cardinal title.

While there is a lot of football yet to be played in the second half of the season, most teams are still in the running as favorites are starting to emerge. Here’s a capsulized look at the Catholic League season so far:

The big result: Catholic Central 30, Brother Rice 7 (Sept. 26). CC made its Boys Bowl game a happy occasion by defeating its archrival for the seventh straight year.

The big result: U of D Jesuit 33, Loyola 27 (Sept. 25). The Cubs scored four consecutive touchdowns to open up a 26-point lead, then held on as the Bulldogs made things close toward the end.

The big game: U of D Jesuit at Divine Child, 7 p.m. Friday. A win will put the Cubs in the Prep Bowl; a loss opens the door for the other two AA Division teams.

The big game: Fr. Gabriel Richard at Bishop Foley, 7 p.m., Oct. 8. A Venture victory would put the pre-season favorites back in the race for the Prep Bowl.

The big game: Shrine at Everest, 7 p.m., Oct. 15. The division race has come down to these two schools in each of the past two years, and that trend should continue this fall.