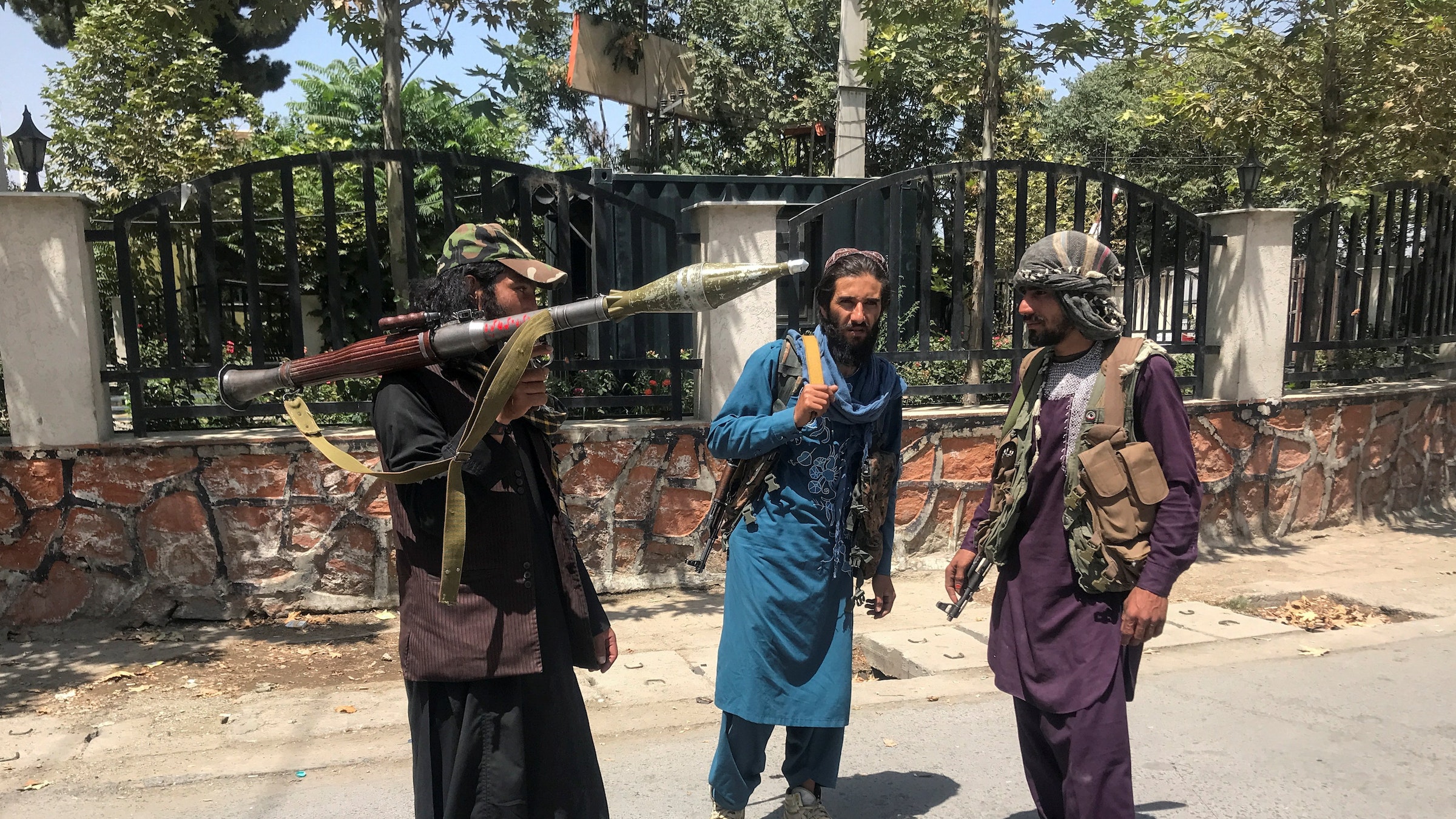 Taliban fighters stand with their weapons on a street in Kabul, Afghanistan, Aug. 16, 2021. During his Angelus address Aug. 15, Pope Francis expressed his concern for Afghanistan amid the Taliban's control of the country. (CNS photo/Reuters)

WASHINGTON (CNS) -- The human dignity of Afghanistan’s people “must be respected” amid the chaos in the country, the head of the U.S. Archdiocese for the Military Services said Aug. 17.

"The fall of Afghanistan and the departure of its elected leaders are a cause for concern, because of the possible denial of human rights, particularly for women and girls," said Archbishop Timothy P. Broglio.

The Taliban, an extremist Islamic movement that ruled Afghanistan until ousted by a U.S.-led coalition nearly 20 years ago, swiftly took control of the capital city of Kabul Aug. 15 after Afghan President Ashraf Ghani fled the country. Several other major cities have fallen to the Taliban.

President Joe Biden announced in April that he would end U.S. involvement in the war in Afghanistan, and he gave the Pentagon until Aug. 31 to complete the withdrawal of the remaining 2,500 to 3,000 troops in that country when he made his announcement. As of mid-August, the number of U.S. troops had dropped to about 650.

But since the Taliban began taking over large swaths of the country, Biden ordered the return of several thousand U.S. troops to secure the airport in Kabul and conduct security measures to help with the evacuation of thousands of people who want to leave the country.

"My two visits to the country confirmed my impression regarding the sacrifices, even including death, made by many members of the Armed Forces and civilians striving to bring stability and peace to the people there," Archbishop Broglio said.

"At the moment, however, we can only pray for the Afghani people, support any humanitarian efforts that are in place there (especially through Catholic Relief Services), and give voice to local leadership on all sides," he said.

"Naturally, I am particularly concerned about those in the U.S. Armed Forces who continue to defend refugees and assets in the country," the archbishop added. "We pray that there will be no violence and a peaceful departure for all of those desiring to leave.”

On Aug. 16, the U.S. Conference of Catholic Bishops tweeted: "Let us continue to pray for all those in #Afghanistan and for peace amid conflict. #PrayTogether.”

Nationals who provided translation, interpretation, security, transportation and other vital services to the U.S. troops in the last two decades have feared reprisals from Afghanistan's Taliban, even more so now as its fighters advance around the country in the absence of the U.S. military.

The New York Times reported Aug. 17 that "tens of thousands of Afghan nationals" who risked their lives to assist the U.S. military in Afghanistan "are more desperate than ever to leave.”

Citing data from the International Rescue Committee, a global nongovernmental humanitarian relief agency, the Times said over 300,000 Afghan civilians "have been affiliated with the American mission over its two-decade presence in the country ... but a minority qualify for refugee protection in the United States.”

In 2006, the U.S. Congress first authorized a bipartisan humanitarian program to provide Special Immigrant Visas, or SIVs, for nationals from Afghanistan and Iraq that include resettlement services and legal permanent residence for the approved principal applicants, their spouses and children.

Since the creation of the program, the U.S. Conference of Catholic Bishops' Migration and Refugee Services has worked with the U.S. Department of State, the Office of Refugee Resettlement and other nongovernmental organizations to provide resettlement services to some of the over 73,000 Afghan SIV holders and their families.

On July 14, the White House announced the emergency relocation of Afghan SIV applicants in their final stages of processing to the United States, with the first of that group arriving in the United States July 30.

Planeloads of Afghans arrived at Dulles International Airport in Virginia outside of Washington and they were then taken to Fort Lee, near Petersburg, Virginia. The families were pre-vetted and able to complete the immigration process safely stateside. Catholic Charities in the Diocese of Arlington, Virginia, is helping resettle the newcomers.