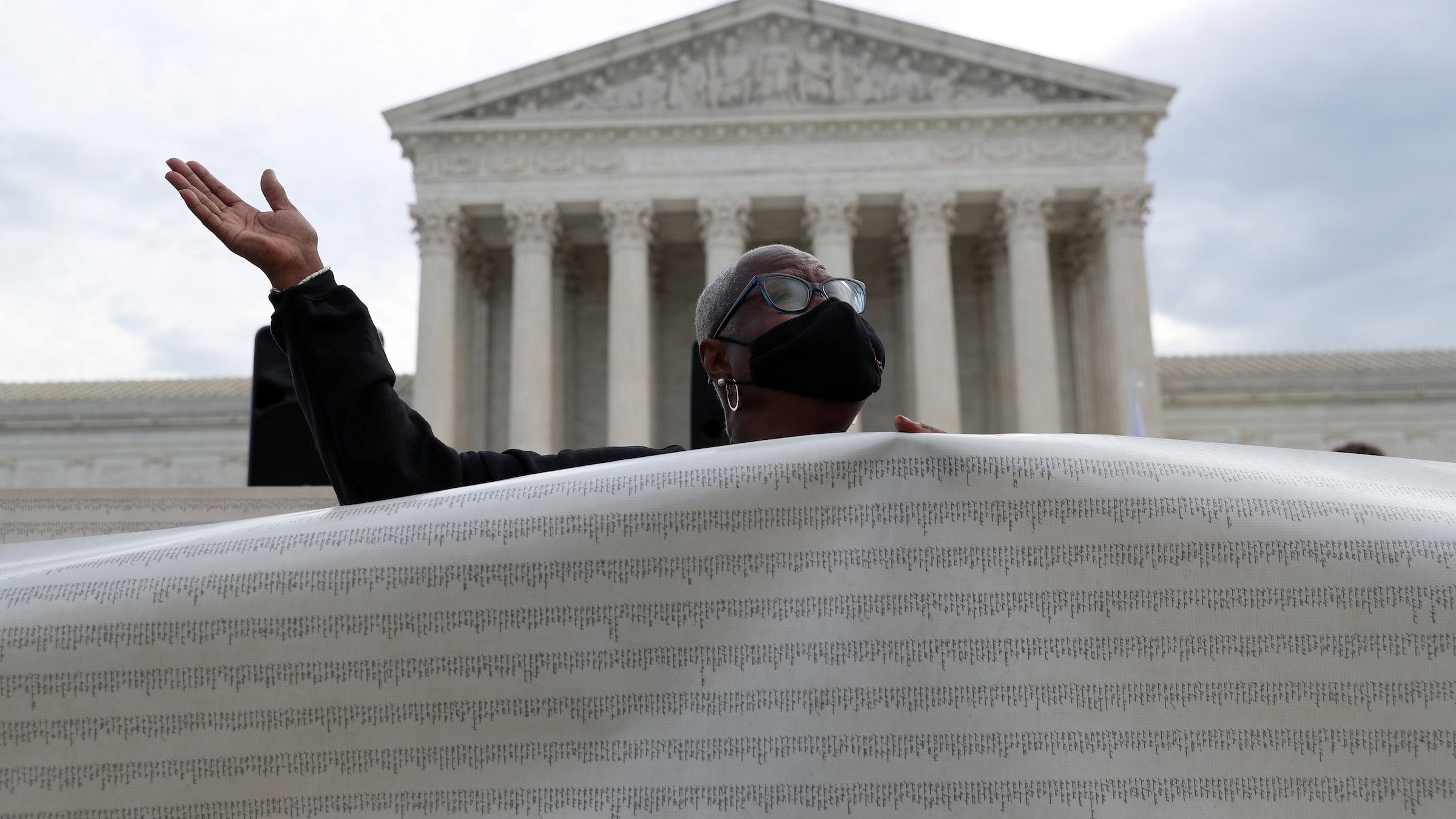 A pro-life supporter holds up a section of a scroll of signatures outside the U.S. Supreme Court in Washington Oct. 4, 2021. Over half a million Americans signed two massive scrolls called the "Moral Outcry Petition" to urge the court to overturn 1973's Roe v. Wade ruling legalizing abortion nationwide. (CNS photo/Leah Millis, Reuters)

WASHINGTON (CNS) -- After a prayer rally outside the U.S. Supreme Court in Washington Oct. 4, Students for Life of America and the Justice Foundation released the "Moral Outcry Petition," a call for the court to overturn its 1973 Roe v. Wade decision legalizing abortion nationwide.

Over half a million Americans signed the petition, which was two massive scrolls filled with the signatures.

"Every child, born or preborn, has the inalienable right to life given by God," said Tina Whittington, executive vice president of Students for Life of America, an organization she said "stands with the hundreds of thousands of signers who call on the Supreme Court to do the right thing and protect the lives of the preborn.”

"The pro-life generation will not rest until abortion is abolished and made unthinkable," she said.

The Justice Foundation said in a statement that the petition "stands on the premise that U.S. citizens do not accept abortion as the law of the land. Especially now that every state has passed safe-haven laws, the 'unwanted child' argument of the pro-abortion lobby is no longer valid.”

Safe-haven laws generally allow the parent, or an agent of the parent, to remain anonymous and to be shielded from criminal liability and prosecution for child endangerment, abandonment or neglect in exchange for surrendering the baby to a safe haven.

Pro-life supporters argue these laws provide a free, safe alternative to abortion for pregnant women in need who feel that they could not care for a newborn.

"This is an unprecedented moment in our fight to abolish abortion," Whittington added. "With a ruling on Dobbs v. Jackson, the pro-life movement may soon see at least the partial reversal of Roe v. Wade.”

On Dec. 1, the Supreme Court will hear oral arguments in the Dobbs case, which is an appeal from Mississippi to keep its ban on abortions after 15 weeks of pregnancy. Supporters of the law are urging the court to reexamine its previous abortion rulings, including Roe v. Wade.

If the court overturns Roe, the move would not make abortion illegal throughout the U.S., but would return the issue to the states to be decided.

For 15 years, Whittington said, Students for Life of America "has been preparing for a post-Roe America, and the Moral Outcry petition reflects the many Americans who have fought and prayed for the protection of the preborn in law -- and who now stand ready to serve mothers and families.”

Oct. 4 was the first day of the high court's new term, and both pro-life advocates and supporters of legal abortion gathered along the street at the front of the court or nearby to rally for their side on the abortion question.

Two days earlier in Washington, supporters of legal abortion marched for "Abortion Justice," gathering at Freedom Plaza in Washington before marching to the Supreme Court.

Organizers said some 600 "sister marches" took place across the country to protest a new Texas law that bans most abortions after six weeks of pregnancy and also to press the Supreme Court to uphold "reproductive rights" and keep Roe intact.

"The 'Women's March' doesn’t speak for me or the millions of women who value human lives -- it is completely out of step," Jeanne Mancini, president of March for Life, wrote in an Oct. 2 opinion piece posted at www.foxnews.com.

"This year's Women's March is not about following science or anything that elevates women or humanity. When we march for life every January, we welcome all human beings -- most especially expectant mothers and their unborn children," she said.

If anyone expected the Oct. 2 event would be a gathering "that welcomes all women," they instead found "a monolith of thought almost exclusively focused on pro-abortion ideology," Mancini said.

The marchers and the event's organizers, she added, make "no effort to keep up with emerging science as it relates to embryonic development," nor do they "draw any lines between early abortions and procedures that cross over into infanticide.”

Recognizing "equal rights for unborn women," she added, "sadly ... does not make its way into the policy platform.”

Mancini also noted that in the nearly 50 years since the Roe v. Wade decision, "medical science has made stunning advances.”

"We now know that a baby's heart starts to beat around five weeks, and a recent study found that babies could experience pain as early as 12 weeks," she said. "These discoveries and numerous others should shape how we approach abortion, especially after 15 weeks, but pro-abortion advocates are stuck in the past.”

She called the Mississippi law's 15-week limit on abortion "a modest limit.”