Mourners pay respects at graves of aborted babies, urge 'no' vote on Prop 3 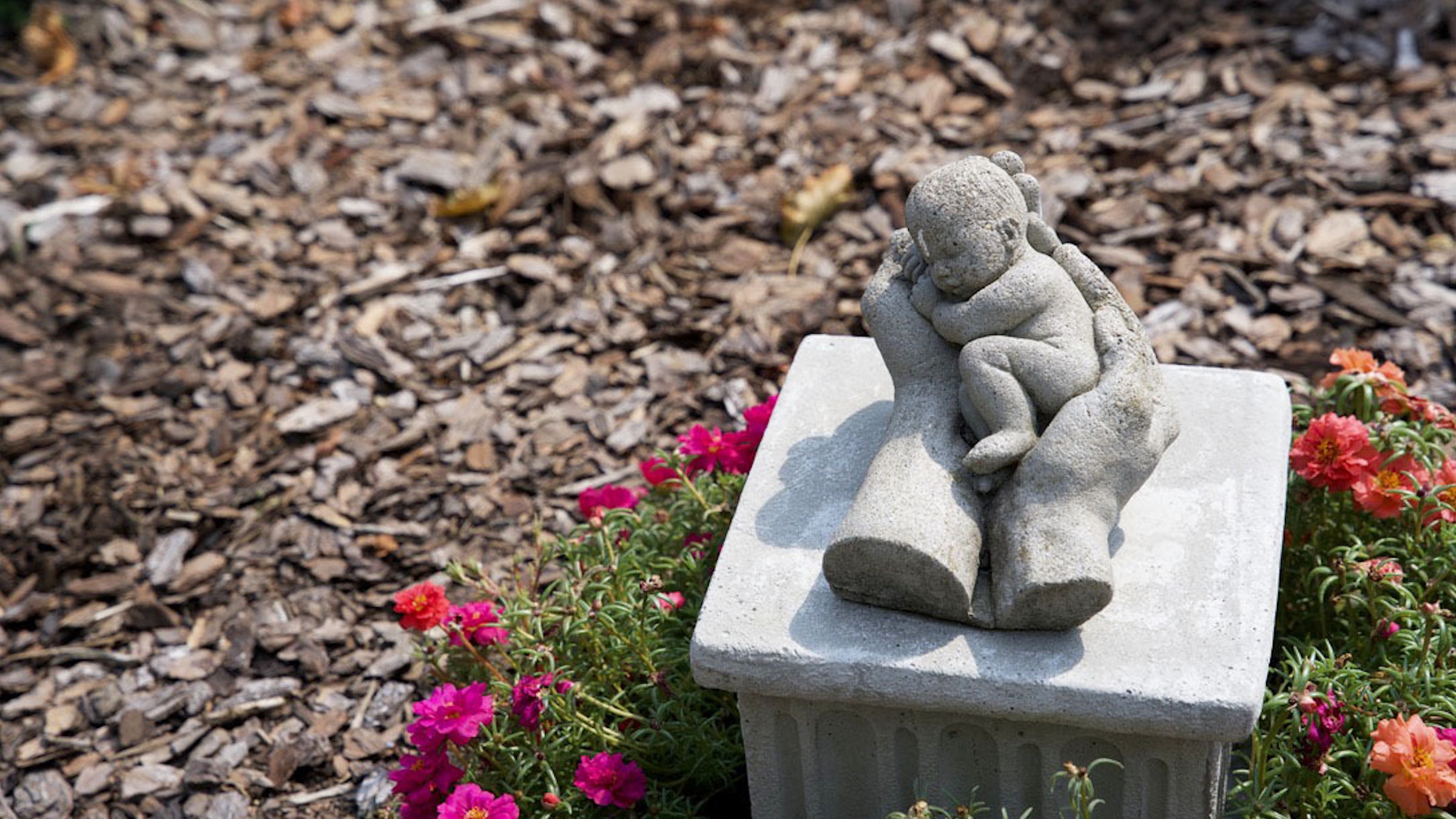 During a service at Assumption of the Blessed Virgin Mary (Grotto) Church and Cemetery as part of the National Day of Remembrance for Aborted Children, the names of children buried at the tombstone erected for those lost to abortion were read Sept. 17. The service was one of 222 memorial services that took place nationwide in 2022, including several in the Archdiocese of Detroit the previous weekend. (Gabriella Patti | Detroit Catholic)

During the ninth annual National Day of Remembrance for Aborted Children, 222 memorial services were held nationwide

DETROIT — As a small gathering prayed silently at the parish cemetery of Assumption of the Blessed Virgin Mary (Grotto) Parish in northwest Detroit, the names of children buried at a tombstone erected for those lost to abortion were read aloud:

The Sept. 17 service marked the ninth year of the National Day of Remembrance for Aborted Children, sponsored by the Detroit-based Citizens for a Pro-Life Society, and was one of 222 memorial services that took place nationwide in 2022.

"You formed my inmost being; you knit me in my mother’s womb," Nancy Goodbalian of Right to Life Warren Center Line read from Psalm 139. "I praise you, because I am wonderfully made; wonderful are your works!"

The graveside vigil featured readings from Scripture, hymns and the laying of a bouquet at the gravesite by the Knights of Columbus. The small crowd heard from speakers Rebecca Kiessling, a lawyer and pro-life activist, and Jessica Hanna, a young mother who shared her miraculous pro-life testimony surrounding the birth of her son. 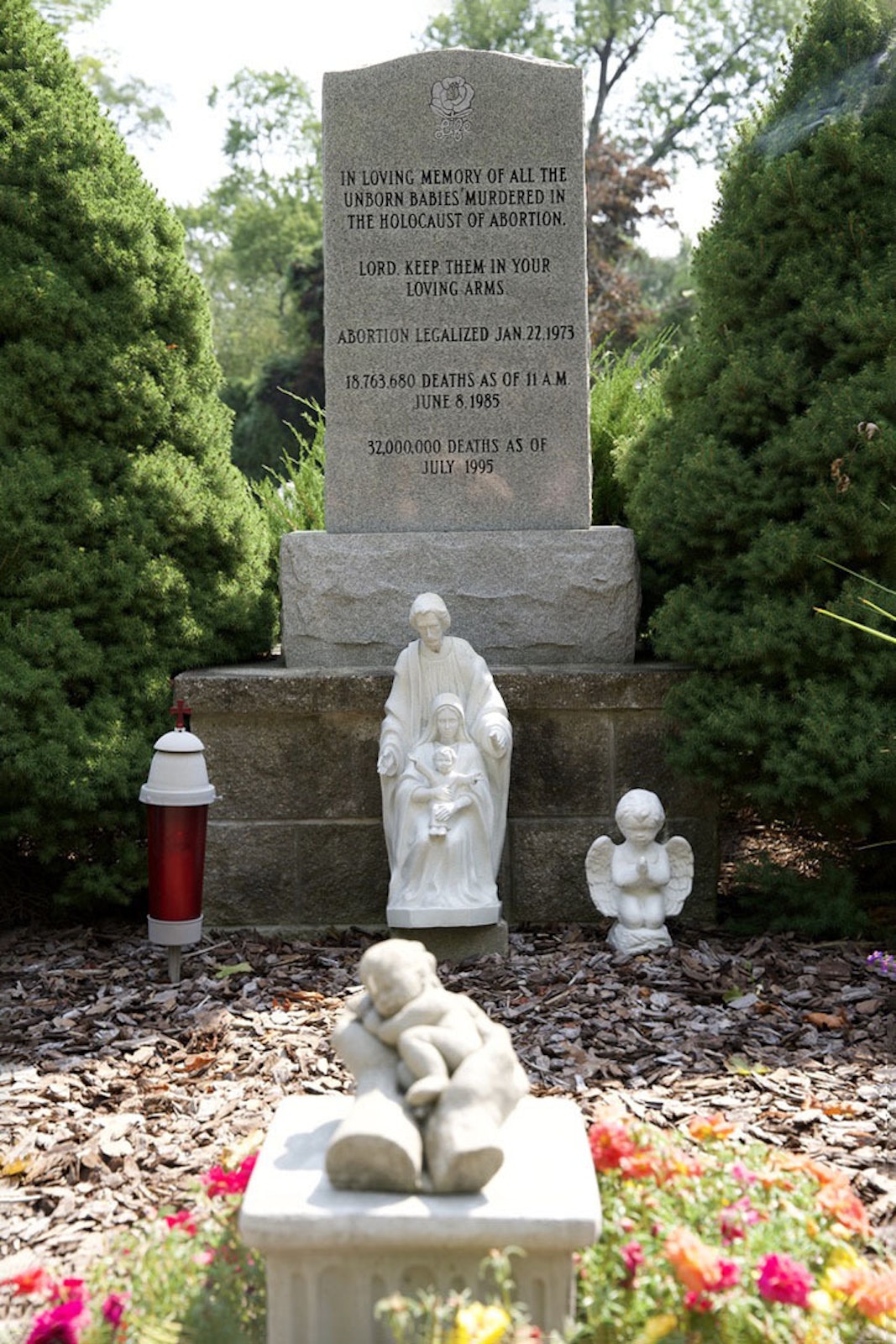 A gravesite marks the location where 30 victims of abortion are buried at Assumption Grotto Cemetery in northwest Detroit.

Brad Smith, development coordinator for Right to Life of Michigan, also spoke about the “Reproductive Freedom for All” proposal, which will appear on the Nov. 8 general election ballot as Proposal 3. Smith urged those gathered to reject the proposal, which seeks to amend Michigan’s constitution to allow “unregulated abortion on demand through all nine months of pregnancy” and upend dozens of laws protecting women, minors, health care providers and victims of abortion.

Kiessling, who was conceived in rape and almost aborted, said she can place herself alongside the children in the grave, as that was nearly her own fate.

Kiessling's birth mother chose to back out of a planned abortion because it was illegal at the time; Kiessling said Michigan's 1931 abortion law, which is currently tied up in the courts, saved her life.

“In Scripture, it says, ‘Though my mother and father forsake me, the Lord will receive me,’” Kiessling said. “Scripture doesn't overlook that or try to soften it like, ‘It doesn't really happen, or it's no big deal.’ No, God addresses and acknowledges that there are children who are utterly forsaken by their mother and father, but it says that He will receive them, and that's the example to us that even if these children are forsaken, we care. We receive them in our hearts." 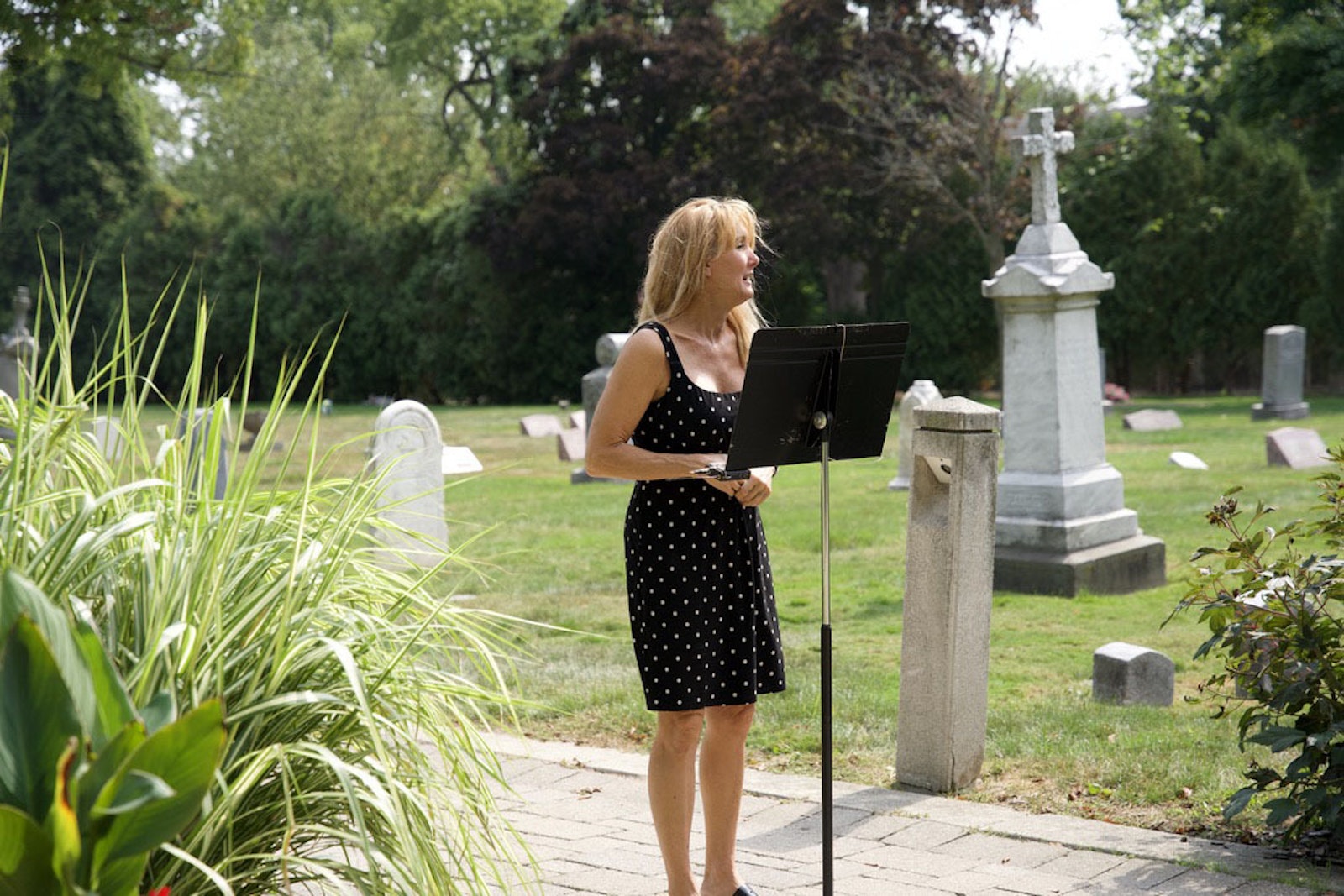 Pro-life activist and lawyer Rebecca Kiessling speaks during the prayer service Sept. 17 for victims of abortion at Assumption Grotto Cemetery. Kiessling, who was conceived in rape and nearly aborted herself, spoke about the pain of losing a child, relating her own experience as a mother of adopted children, two of whom died in 2020.

Kiessling, who is a mother of six, three of whom were adopted, lost her three adopted children — her two adopted sons died of a fentanyl overdose in 2020, and her daughter Cassie, who was born with a serious genetic disorder, died soon after birth more than 20 years ago.

‘Why would you ever want to lose any of your children?” Kiessling said as she tearfully addressed those gathered. “So many people just don't even value the gift of the ones that they’ve been given. I think of the Scriptures, where Jesus was talking about letting the little ones come to him. ... He goes into the parable of the lost sheep and how the Good Shepherd leaves the 99 to save the one, and he says, 'For, in the same way, your Father in heaven is not willing that any of these little ones should perish.'

"I feel like that's what's normal," Kiessling said. "You wouldn't be willing that any of your children should perish, and you would do anything you could to save any one of them. And instead, we live in a society where people are willing that their little ones should perish.”

The pro-life community's role is to show society that these little ones do matter, Kiessling said.

"We stand as surrogates for those parents, to show that we love them and that their lives matter," Kiessling said. "(We) place (ourselves) in that grave to be able to relate and empathize with someone who was unjustly killed.”

The second speaker, Hanna, shared her story of defending the life of her unborn child when she was diagnosed with cancer and encouraged by multiple doctors to abort. After finding out she was pregnant with her fourth child in 2020, Hanna was diagnosed with invasive lobular breast cancer while only 14 weeks along. 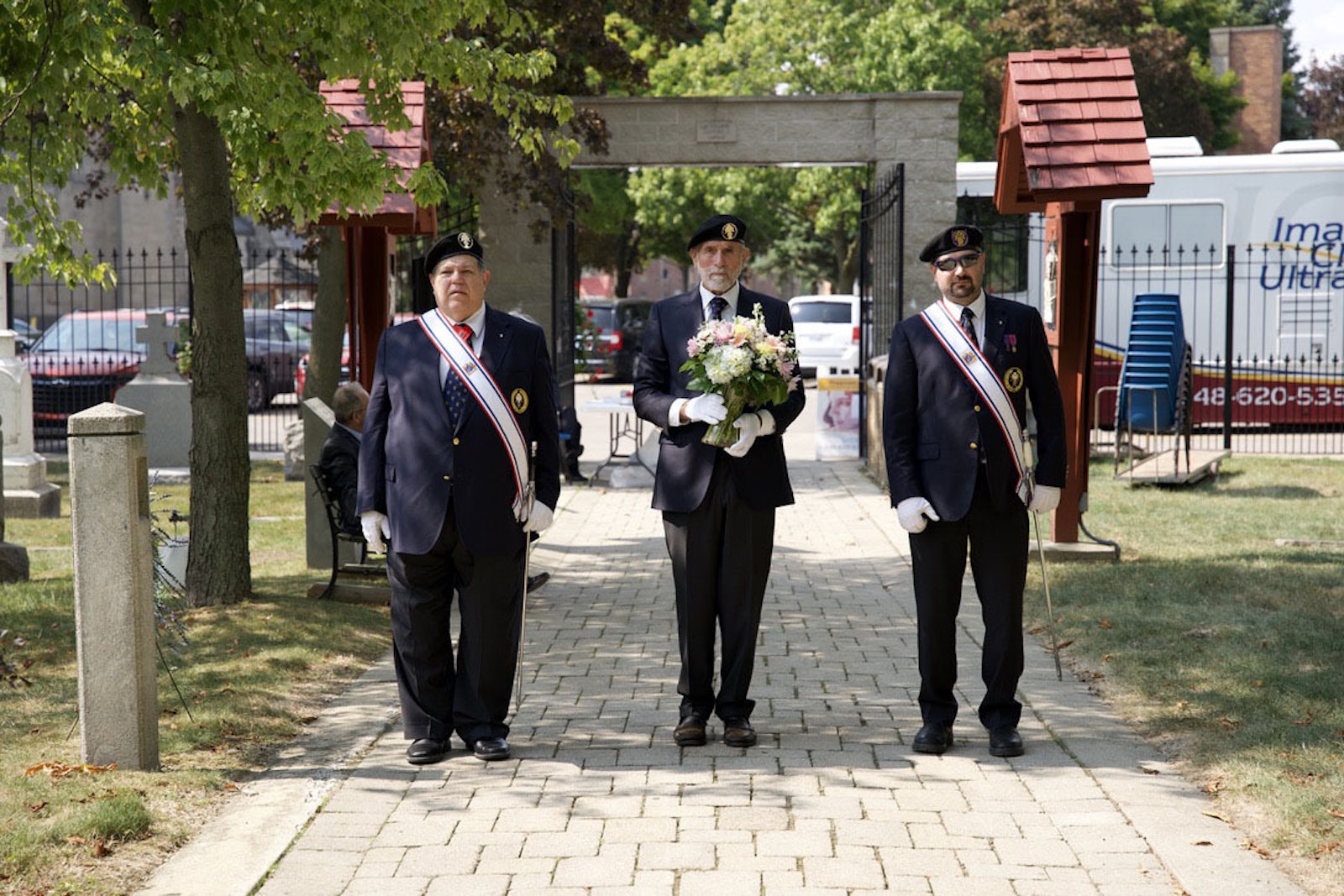 The graveside service to honor children killed in abortion included readings from Scripture, hymns and a bouquet laying ceremony by the Knights of Columbus.

“Once they told me I had cancer, and I'm finding myself 14 weeks pregnant, I wanted to immediately fall on the sword for my son and do nothing," Hanna said. "No treatment, or surgeries. I didn't want to expose them to anything. I wanted to sacrifice because that's what a mother does. That's what love does. Love sacrifices.”

However, Hanna was told she could go through surgery and chemo safely while pregnant. Despite the joy of hearing that she could potentially save her life in addition to her son’s, Hanna was advised over and over again to terminate her pregnancy.

“I vowed to never, ever hear that garbage again," Hanna said. "So, I vowed I would only work with doctors who respect the life of my baby, not just me.”

After finding a doctor who respected both the life of her son and herself, Hanna underwent surgery, only to be told that her cancer was growing more rapidly than the doctors had originally thought and was likely terminal. Because she was pregnant, doctors were unable to scan her to see whether the cancer had spread throughout other parts of her body.

Hanna turned to her refuge: Christ. 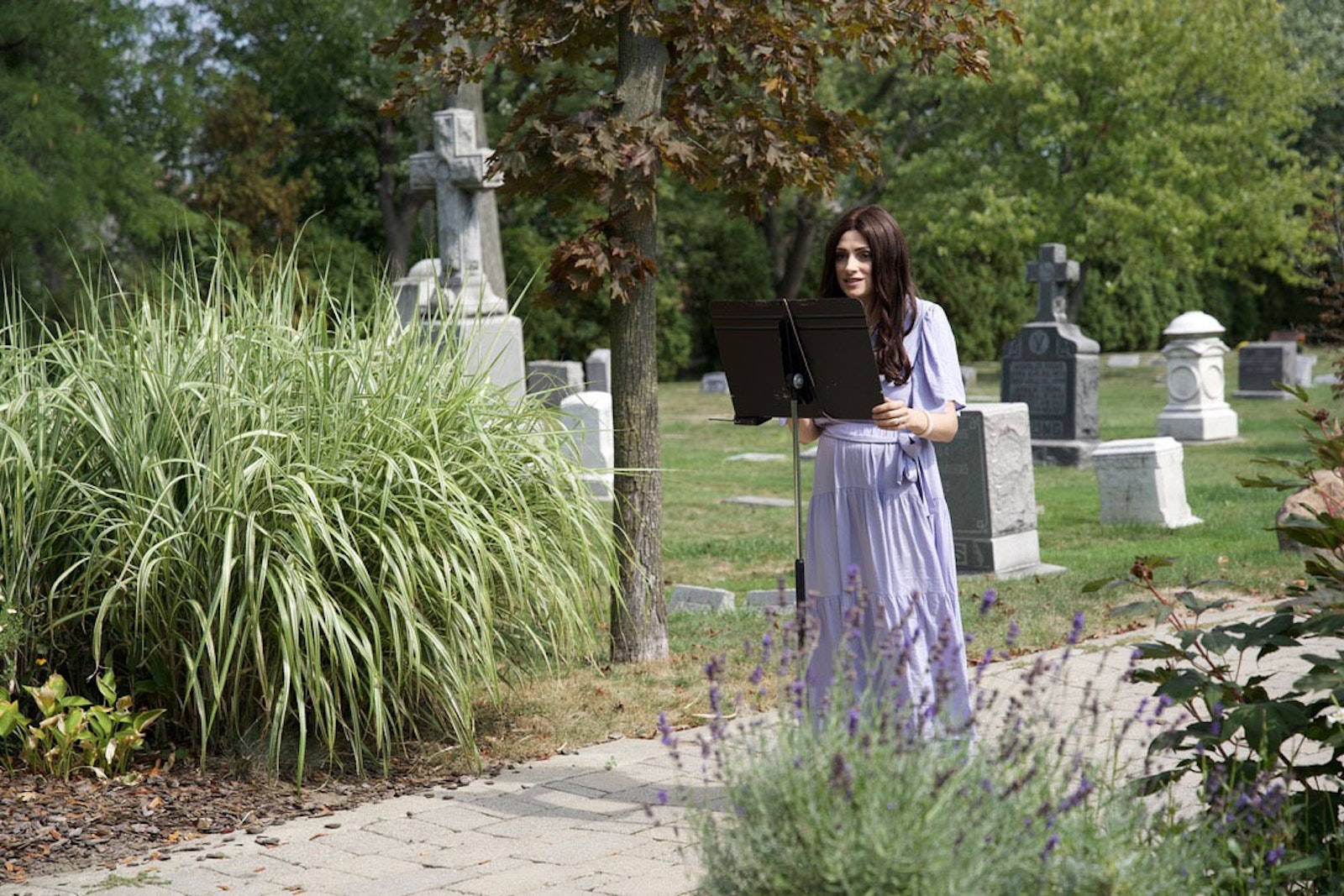 The second keynote speaker, Jessica Hanna, shared her story of how she was put in the position of defending and standing up for her own unborn child when she was encouraged by multiple doctors to abort.

“I went to the Blessed Solanas Casey Center in Detroit, and I prayed at his tomb," Hanna said. "I went to every priest I knew, I got blessings, anointing of the sick. I received the Eucharist as much as possible. I frequented confession. I did whatever I could at the foot of the cross and begged my Lord to save my baby and to also spare my life if it be his will.”

On May 30, 2021, her son Thomas Solanus was born. Hanna underwent a scan soon after to evaluate her cancer. Two days later, she received a call. There was no cancer to be found.