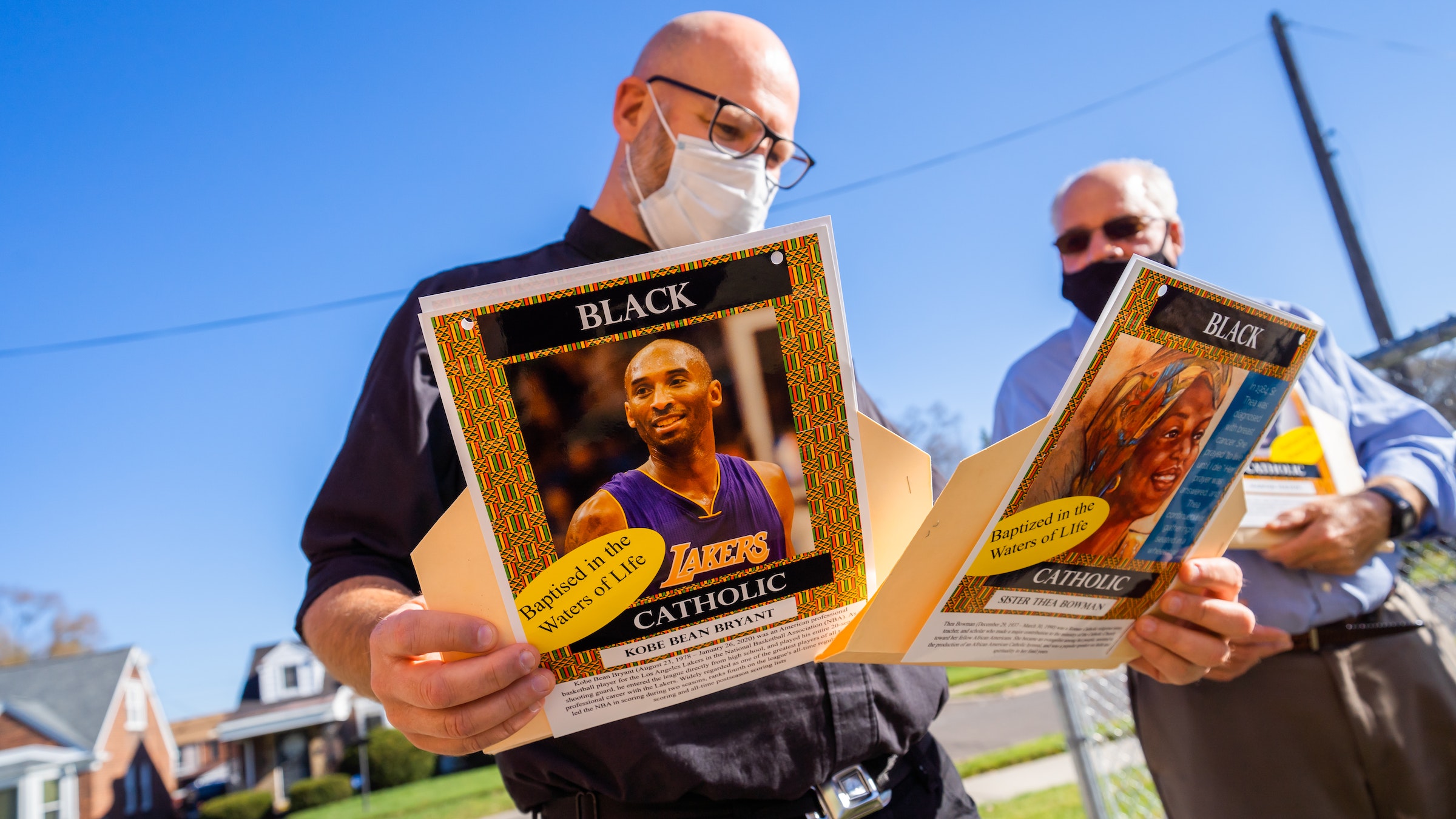 As soon as COVID restrictions are lifted, group plans to help middle schoolers create a traveling mural of Black Catholic heroes and saints

DETROIT — Though the 30th annual Black Catholic History Month is coming to a close, leaders in the Detroit Catholic community are making sure the celebration of Black Catholic excellence and leadership carries on well into 2021 and beyond.

During November, which has been recognized as Black Catholic History Month since 1990, leaders in the Black Catholic community in Metro Detroit had planned to embark on a mural project designed to commemorate Black Catholic “saints and heroes,” with a particular emphasis on outreach to young people.

While the rise in coronavirus cases has delayed the start of the project, the vision to inspire young Catholics’ involvement is nevertheless taking shape.

“The idea came when a group of people associated with some racial justice organizations came together and said, ‘What we can we do to help kids recognize saints and heroes in the Black community of their choosing?’” Vickie Figueroa, coordinator of Black Catholic ministries for the Archdiocese of Detroit, told Detroit Catholic.

Figuroa is part of a six-person committee involved in the project, along with Steve Wasko, project director for the St. Suzanne Cody Rouge Community Resource Center in northwest Detroit, where the murals would be created, and Fr. Joshua Peters, SJ, associate pastor of St. Suzanne/Our Lady Gate of Heaven Parish and nearby Christ the King Parish.

The committee was inspired in part by a mural created for the 2017 National Black Catholic Conference titled, “Our Lady of Stono River.” The 30-foot-wide mural depicts black saints as well as images of Mary and Jesus done in an African theme, Figueroa said.

“We thought, ‘Wouldn’t it be great if we could get kids to draw like that so they could see saints and heroes who look like them?’” Figueroa said.

The goal is to involve Detroit middle school students in the project, with guidance from creative professionals from the College of Creative Studies. Students will be invited to choose from a host of leaders, saints and famous Black Catholics, including Sr. Thea Bowman, Blessed Pierre Toussant, Kobe Bryant, Toni Morrison, Simone Biles and former Detroit police chief Isaiah (Ike) McKinnon, and given creative freedom to decide how to depict them.

“This is part of a rich tradition of the College of Creative Studies working with youths in this neighborhood,” Wasko said. “In our community center, there are large murals on the wall done with the help of College for Creative Studies instructors showing all the faces of the Cody Rouge neighborhood.”

In the summer of 2019, six high schools from the Cody Rouge neighborhood were given the opportunity to participate in classes with College for Creative Studies instructors on the parish grounds through the city of Detroit’s “Grow Detroit’s Young Talent” program.

This new mural project will be part of this continued partnership, with the hope that the message and vision will reach everyone, Catholic or not.

“This project isn’t intended entirely just for Catholics,” Wasko said, “but you could frame this in the context of ‘unleashing the Gospel’ and the new evangelization.”

The plan is to paint the murals on a series of two-sided panels, each the size of a door, which could be moved and taken to various churches and schools as a traveling exhibit.

“Each door would be its own piece of art, but if you put them together, they create a picture in itself,” Fr. Peters said. “This could be something that could travel around the archdiocese and it could travel around our country. The idea is to celebrate Black excellence and Black Catholicism, not only in November, but with the idea that the spirit of how these holy people lived their lives can be infused in communities throughout the year.”

While the project is ready to be executed, and Fr. Peters has identified willing students, the recent surge in COVID-19 cases has put a pause on it, for now.

“These are extraordinarily strange times,” Fr. Peters said. “When I pitched (the idea) in my classes at Christ the King, a lot of kids were very interested, but we also need parents excited and feeling safe (to send their kids) and these are very unsafe feeling times.”

When the project does finally begin, the environment will be safe, sanitized and socially distanced, Fr. Peters said, adding the planning could even be started remotely through Zoom sessions.

Fr. Peters said he’s considered creating a video trailer to pitch the project to prospective students and parents, “so parents will want their kids to be involved in this.”

“This is Detroit excellence here, and we want to celebrate all these great aspects of who are as Detroiters, but also who we are as children of God,” Fr. Peters said.

No matter when the project will be started and completed, the committee members agree it’s important for young Black Catholics to have role models in their faith.

“It is very important for them to see saints who look like them because they need to know that they are persevering in the faith for a reason, and that other people have died and gone before them,” Figueroa said. “The Catholic Church has not always been super kind to African-Americans or people of color. Sometimes Blacks were denied Communion, or segregated by pews. We want people to know that despite these challenges, people remain Catholic, they remain heroes and faithful to their cause, and God helped them persevere.”