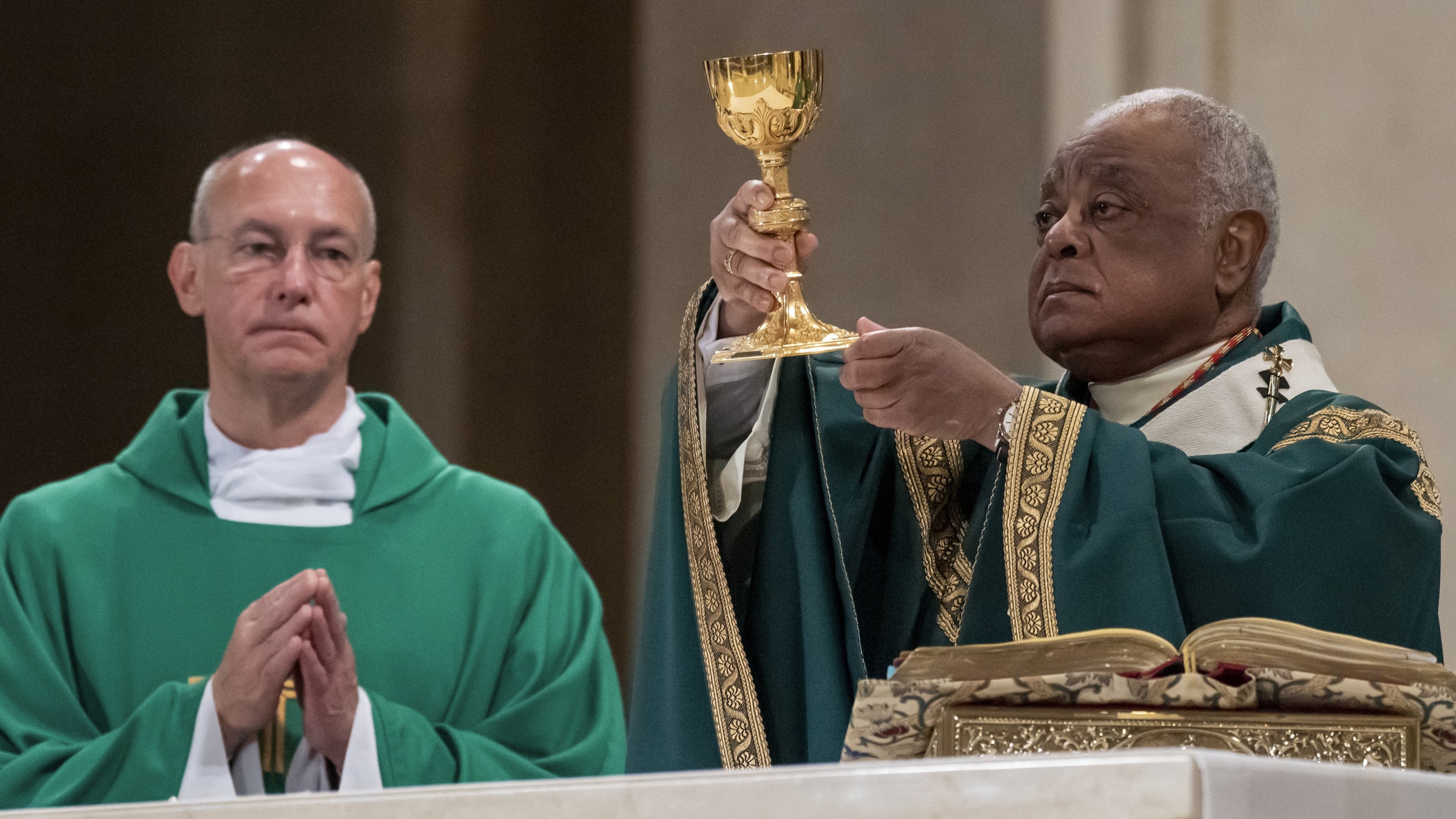 WASHINGTON (CNS) ─ During the closing Mass of the centennial year commemorating the 100th anniversary of the placing of the foundation stone of the Basilica of the National Shrine of the Immaculate Conception, Washington Cardinal Wilton D. Gregory encouraged Catholics to reflect on Mary as the Mother of God and the entire church.

"This great basilica is a brick-and-mortar tribute to that mother who is perfect in every fashion. For a century, American Catholics have helped to build and then traveled as pilgrim children to this place to honor the mother of the church, God's own mother, and the mother of countless children who all claim that she is uniquely their own," he said.

On Sunday, Sept. 12, hundreds of local Catholics gathered in the basilica's upper church for a liturgy celebrated by Cardinal Gregory who was joined by Msgr. Walter Rossi, the rector of the basilica, Msgr. Vito Buonanno, the basilica's director of pilgrimages and several other priests.

A year ago, Cardinal Gregory was the principal celebrant of a Mass to inaugurate the jubilee year. During his Sept. 12 homily, he said throughout the past century the shrine has drawn countless people from all over the country and the world.

While there are many churches and holy sites in the United States devoted to the Blessed Mother, Cardinal Gregory said the basilica "embodies both our national identity and the various tributes that people offered to Mary from the rich cultural, ethnic and racial classes that belong to us."

The basilica's many chapels, statues and shrines "remind us of the rich legacy of faith that we share when we honor the one who is mother to all of her children and God's very own mother as well," he said.

In welcoming people to the Mass, Msgr. Rossi said other than a few virtual lectures, Lenten reflections and choir concerts, many of the planned events for the centennial year were thwarted due to the pandemic but he said there were also some blessings.

"For us here at Mary's Shrine, the pandemic led us into a new virtual ministry by livestreaming our noon Mass each Sunday," he said, noting that it reached 3.5 million people since March 2020 and extended the shrine's reach around the world.

Msgr. Rossi said 2024 marks the next centennial celebration for the shrine, when it will be the 100th anniversary of the first Mass celebrated there. "Hopefully by then, the world will be back to normal, we won't have to wear face masks and this great upper church will be filled with our friends," he said.

He also noted the closing Mass took place on the day after the 20th anniversary of the Sept. 11, 2001 terrorist attacks, as the nation paused over the weekend to remember the horrific events of that day. He urged the faithful to pray for those who died and those who continue to mourn their loss.

In tribute to the nearly 3,000 people who died on 9/11, the American flag flies from the shrine's Knights Tower.

As he did at last year's opening Mass, Cardinal Gregory carried the pastoral staff of Bishop Thomas Shahan, the first rector of the basilica, a crosier which was also used by Baltimore Cardinal James Gibbons as he blessed and placed the foundation stone in place on Sept. 23, 1920.

A chalice used during both the opening and closing jubilee year Mass was the first chalice of the shrine, also used 101 years ago at the foundation stone placing Mass and created from jewelry donated to the shrine from the faithful throughout the United States in 1917.

The basilica is home to more than 80 chapels and oratories that honor the Blessed Virgin Mary and represent the peoples, cultures and traditions that are the fabric and mosaic of the Catholic faith in the United States.

Josephine Ntchanleu and Marian Mua, friends from Cameroon, attended the anniversary Mass together and are weekly Massgoers at the basilica which they consider their parish home.

Ntchanleu credits the shrine's Masses and hearing homilies about Mary there for her conversion to Catholicism. "Mother Mary is everything to me. That's what made me Catholic," she said. "I'm so happy to be here."

Mua said: "The Shrine has done so much for me in my life. I love it so much, and it has made me grow spiritually."

Boyle writes for the Catholic Standard, archdiocesan newspaper of Washington.