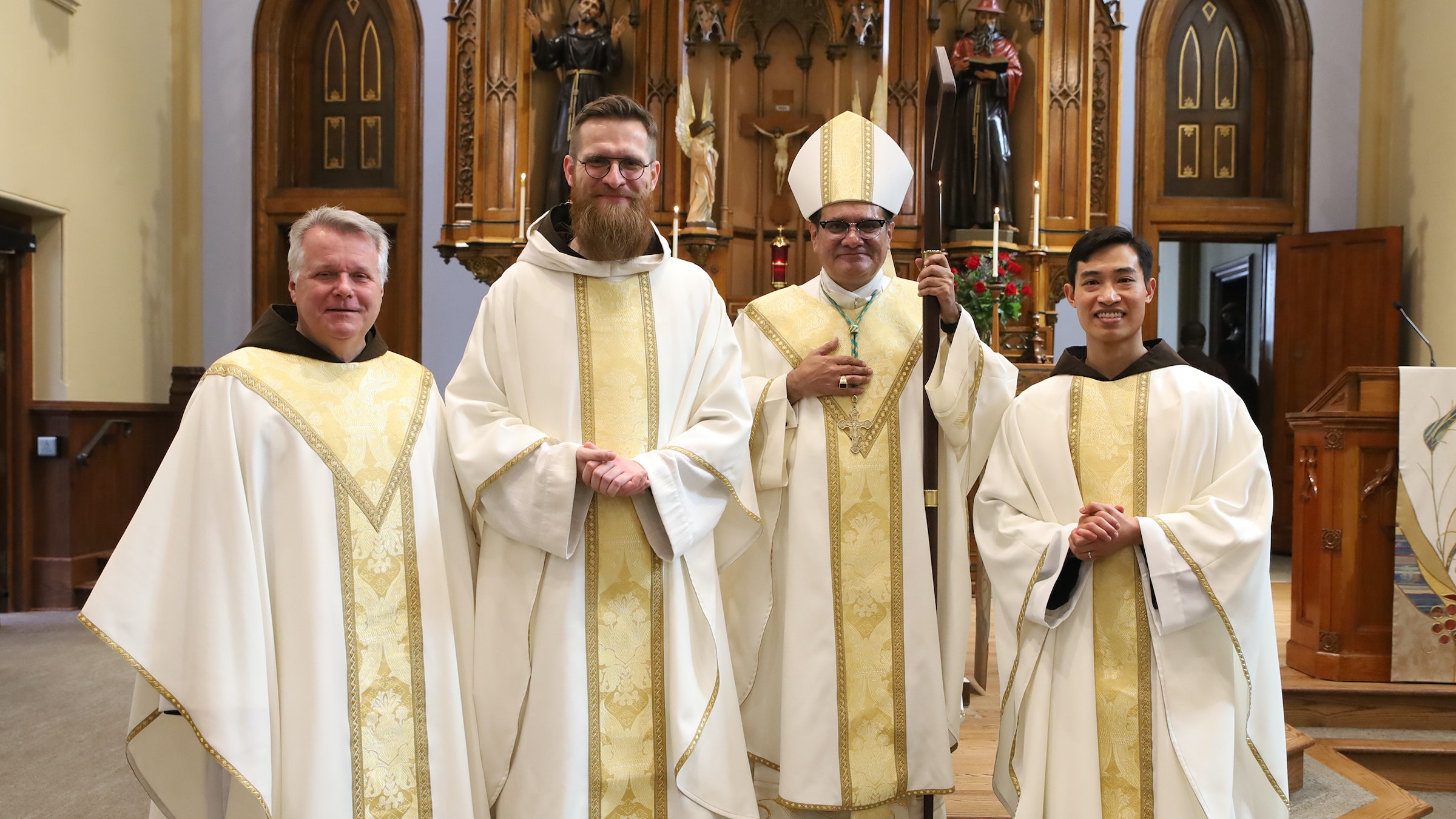 DETROIT — The moment Fr. Thomas Skowron, OFM Cap., heard about the Capuchin Soup Kitchen, he knew he wanted to serve in Detroit.

The Polish-born, German-raised Capuchin was studying at the Capuchin Theological School in Munster, Germany, volunteering at the soup kitchen there when he first heard about Fr. Solanus Casey, an American Capuchin who was to be beatified in 2017.

When he heard the blessed friar was there to open the door to anyone who knocked and was in solidarity with the poor, he knew, like Fr. Solanus, he had to go to Detroit.

He got his chance last year, when the Capuchins sent him to the Solanus Casey Center after Bro. Thomas took his solemn vows. And on June 4, he was ordained a priest at the very monastery where Blessed Solanus went at the request of the Virgin Mary when Blessed Solanus was looking for guidance.

“I first heard about Solanus Casey around 2017, around the beatification, and I was learning about the soup kitchen he started in Detroit,” Fr. Skowron told Detroit Catholic. "It was around that time when the friars in Germany were planning my staying abroad for the summer, asking where I’d like to go. I did my research, looking for more information about the Capuchin Soup Kitchen in Detroit, learning about Solanus, which made this place more amazing.”

Fr. Skowron was sent to Chicago instead, serving the poor on the city’s east side. But on June 4, he was ordained in Detroit by Auxiliary Bishop Arturo Cepeda, in the city where he know works at the Capuchin Soup Kitchen and ministers at the Solanus Casey Center. 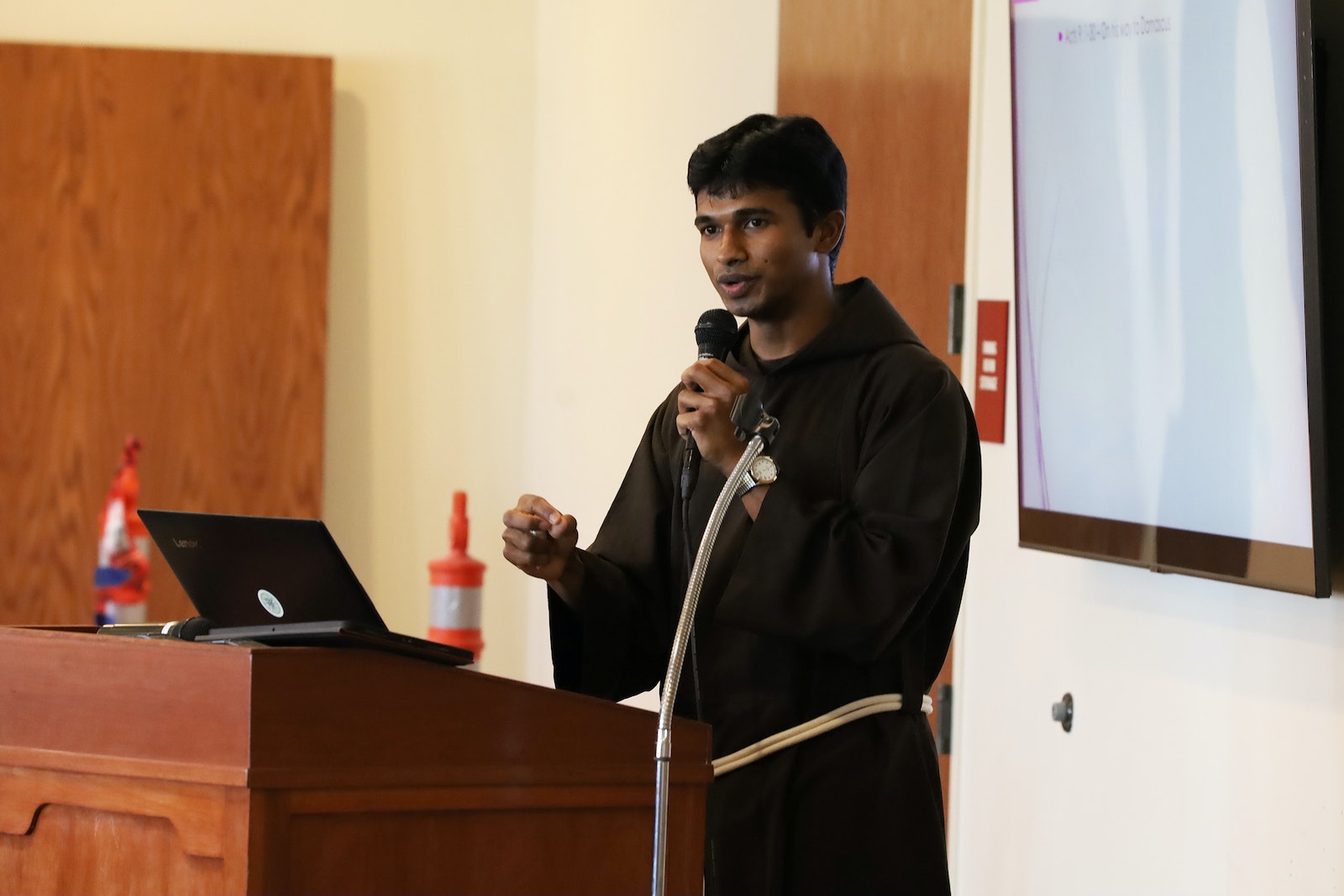 Fr. Antony Julius Milton, OFM Cap., who was ordained earlier this spring in India, will serve at the Capuchin Retreat Center in Washington Township.

Fr. Skowron, 37, was ordained alongside Fr. Truyen Nguyen, OFM Cap., as part of a class of four friars from the Capuchin Franciscan Province of St. Joseph who were ordained this year, including Fr. Raymond Peter Chinnippan and Fr. Antony Julius Milton, who were ordained in their home province of Tamil Nadu, India, in April.

Both Fr. Skowron and Fr. Milton, who was unavailable for an interview before publication, will serve in Detroit.

Fr. Nguyen will be serving in Montana and Fr. Raymond Peter will be ministering in Chicago.

Having a German-speaking friar at St. Bonaventure Monastery in Detroit is a bit of divine humor, Fr. Skowron said. Blessed Solanus struggled with German during his seminary studies in Milwaukee — a heavily German-speaking area in the early 20th century — causing him to pursue the Capuchins in Detroit in the first place.

“Sometimes the friars here like to make fun; we all thought the German history of the province was over, but God has a great sense of humor,” Fr. Skowron said. “Solanus heard his call, ‘Go to Detroit,’ and I guess I heard his call, too — maybe not as direct or clear, but this desire in my heart to grow more and more to come here and stay with the friars in this province. It’s definitely a blessing.”

Fr. Skowron first discerned with the Capuchins when he was 17, being drawn to the community’s hospitality and charism of serving others. 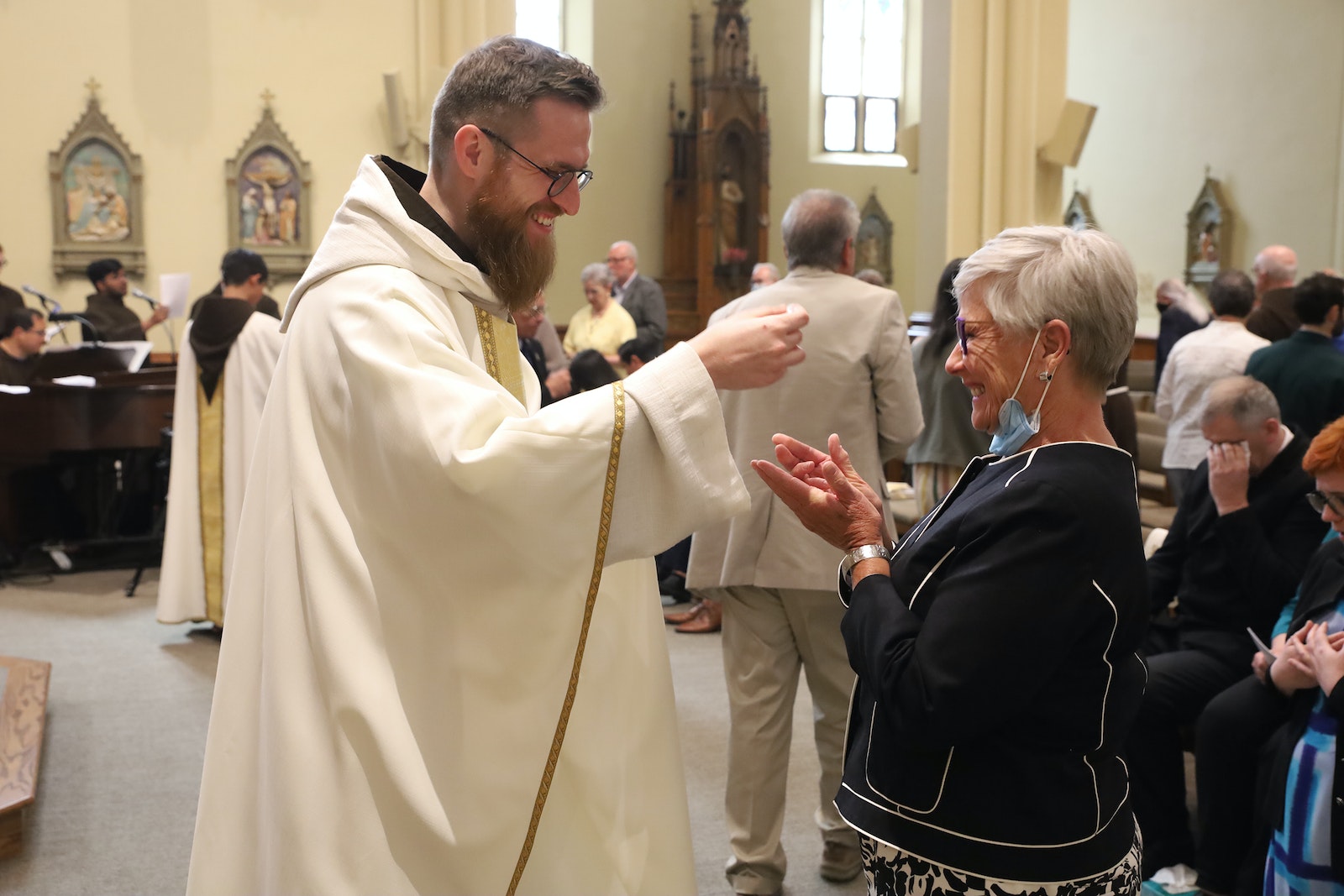 Fr. Skowron smiles broadly as he offers Communion to friends, family and well-wishers during his ordination Mass on June 4 at St. Bonaventure Monastery in Detroit.

“I was a teenager when I heard about St. Francis for the first time,” Fr. Skowron said. “That’s where the idea of becoming a Franciscan friar first appeared in my mind. I did my research and found communities where I could live in the spirit of St. Francis. Somewhere along the way I discovered the Capuchins, visited the friars, and just found the place where the charisms and spirit is real, is alive.”

Fr. Skowron began discerning, joining the order when he was 21 but briefly leaving to get a job and further mature. He eventually returned to the Capuchins, finishing his studies in Munster in 2019 and making his solemn vows in 2021.

During his time of studying and discerning with the Capuchins in Munster, Fr. Skowron worked at a soup kitchen, where he discovered a love for the poor. That’s when he first gained an interest in serving in Detroit, but his superiors decided to send him to Chicago instead.

“I ministered in Chicago in the Port Ministries, a family center on the east side in pretty poor neighborhoods, but it’s an amazing place,” Fr. Skowron said. “We had an after-school program from studies, a little clinic, and a bread truck. We made sandwiches and other snacks, driving around to feed people in need.”

Fr. Skowron also used his iconography skills to do some projects at Capuchin properties throughout the city. 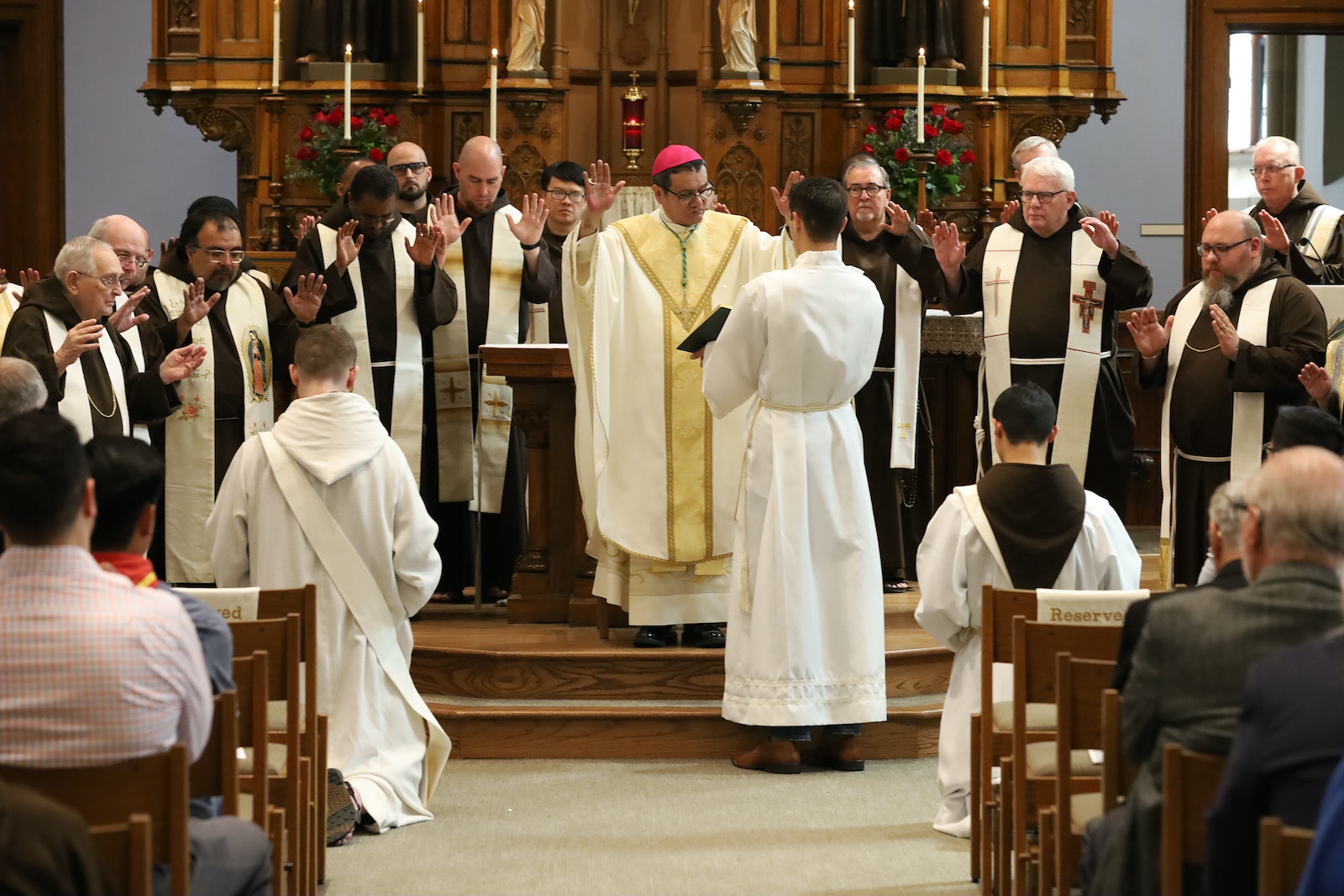 Fr. Skowron, a native of Poland, wanted to minister in Detroit after learning about Blessed Solanus Casey back in 2017. The blessed Capuchin friar who started the Capuchin Soup Kitchen was an inspiration to Fr. Skowron, who also has a heart for serving the poor.

After taking his solemn vows in 2021, Fr. Skowron was told he was finally going to Detroit, serving at the same monastery as the blessed friar he heard so much about. Fr. Skowron splits his time between working the front desk at the Solanus Casey Center, doing counseling, and working at the Capuchin Soup Kitchen on Meldrum.

“I remember the provincial asking me where I would like to go after my solemn vows, knowing that I wouldn’t be guaranteed (my preference),” Fr. Skowron said. “But when he asked, I said I would like to go to Detroit to work in the soup kitchen, and he said, 'That’s perfect, because that’s exactly what we planned for you.'”

Beyond his work at Capuchin ministries, Fr. Skowron has assisted with liturgies at St. Charles Borromeo and St. Augustine & St. Monica parishes in Detroit, and at St. Elizabeth Ann Seton Parish in Troy, getting a lay of the land in Detroit and learning more about its people.

“Many people who live here in Detroit, and probably the entire archdiocese, have been through some difficult times," Fr. Skowron said. "But I really appreciate and admire this amazing experience here. It gives me a lot of joy and a lot of motivation for my ministry for sure.”