Nuncio says violence in Sahel puts all, including Catholics, at risk 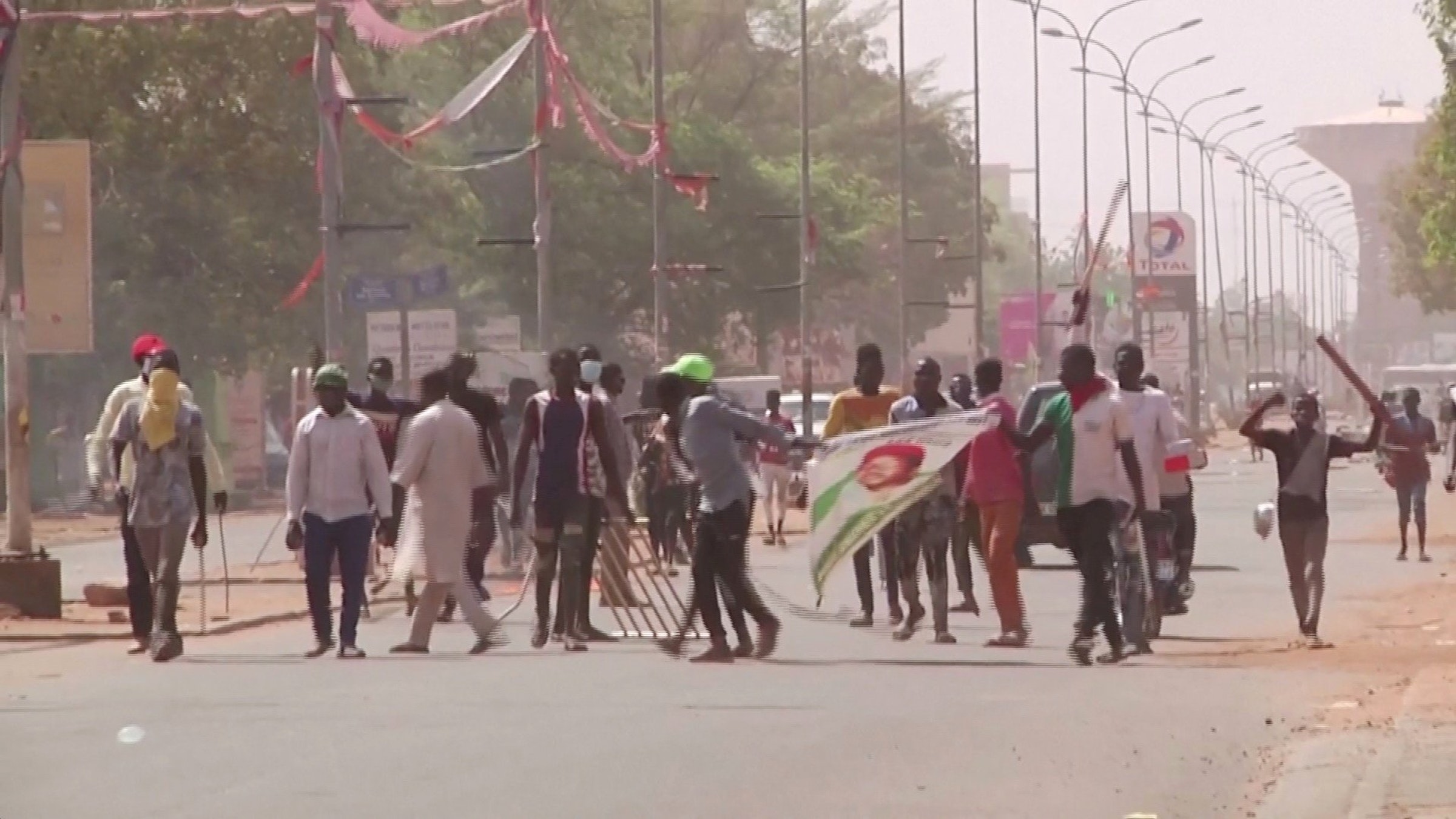 Protesters carry batons while holding a picture of opposition presidential candidate Mahamane Ousmane along a road in Niamey, Niger, Feb. 24, 2021, in this still image taken from video. The protest took place a day after Ousmane rejected election results that gave his opponent Mohamed Bazoum a majority of the votes. (CNS screenshot/Reuters TV)

OXFORD, England (CNS) — A Vatican diplomat said people are at grave risk because of violence in Africa's Sahel region, as Pope Francis prayed for victims of a recent terrorist attack on civilians.

"Christians suffer the same effects and consequences as the entire population, insofar as the direct causes are socioeconomic or political," said Archbishop Michael Crotty, apostolic nuncio to Niger and Burkina Faso.

"Some of the violence from Islamist terrorists has been religiously motivated, and Christians have been targeted in particular by jihadist terrorists violently disrupting religious ceremonies," he told Catholic News Service. He said that because of the "tiny size of the Catholic and Christian populations, even sporadic acts of violence against Christians have a disproportionate, deleterious effect."

More than 5,000 French troops are currently deployed in the border area of Niger, Burkina Faso and Mali to contain insurgents linked to the Islamic State group, al-Qaida and Boko Haram, operating from Nigeria. Their attacks have left more than 850,000 refugees and nearly 2 million displaced, according to a January U.N. report.

Archbishop Crotty made the comments to CNS March 26, five days after an attack on three villages in Niger's Tahoua department. The United Nations said 137 civilians, including 22 children, were killed.

The nuncio said the Oct. 8 release of Father Pierluigi Maccalli, an Italian member of the Society of African Missions who had been held for two years, was "a cause of great joy," but "underlined the grave risk" facing Catholics and other Christians.

"Foreign missionaries may be targeted for kidnap-ransom demands by the jihadist, terrorist and criminal groups who effectively control large swathes of the Sahel region. Many foreign missionaries have had to leave, with the consequence that some communities are now without priests or religious sisters," the nuncio said.

Niger's 25,000 Catholics make up a small fraction of its mostly Muslim population of 23 million.

At his March 24 audience, Pope Francis urged prayers for the Niger attack's "victims, their families and the entire population." He said he hoped the violence would not cause a loss of trust "in the path of democracy, justice and peace."

The same day, UNICEF said it was "deeply shocked and outraged" by the targeting of families and children. It said insecurity and violence were hampering humanitarian assistance.

An Italian priest ministering in the savannah area bordering Burkina Faso told the Vatican's Fides news agency March 22 a "real psychological war" was being waged against civilians, adding that explosives, "widely available" from local gold mines, were being used to mine the area and "interrupt trade, markets and contacts."

"Pupils and students have been forced to move elsewhere to continue their studies, while families are terrified and unable to cultivate the land or raise livestock," he said.