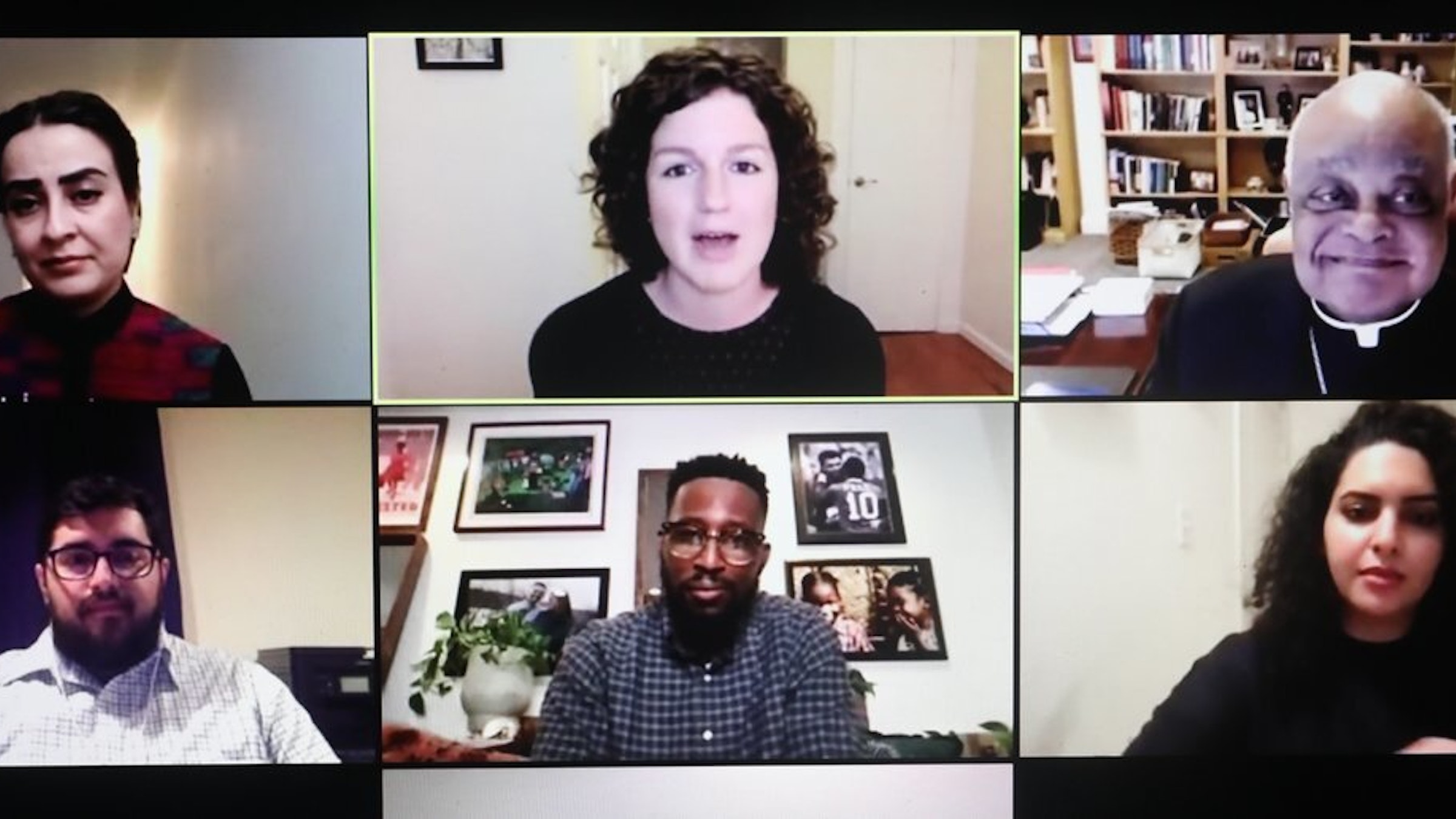 Washington Cardinal Wilton D. Gregory, top right, is seen in this Oct. 7, 2021, screen grab of a virtual discussion on "Who Is My Neighbor?" It was organized by the Archdiocese of Washington and the Initiative on Catholic Social Thought and Public Life at Georgetown University. (CNS screen grab/Andrew Biraj, Catholic Standard)

WASHINGTON (CNS) -- In a dialogue that hinted at the themes of the 2023 Synod of Bishops, a panel of young leaders and Washington Cardinal Wilton D. Gregory looked at the scriptural call that forms the central thesis of Pope Francis' 2020 encyclical, "Fratelli Tutti.”

It's the question asked of Jesus by his followers, "Who is my neighbor?”

Cardinal Gregory said the encyclical is a road map by Pope Francis for how to engage in the most critical social issues of our time. And that begins with dialogue, he said Oct. 7 in the first of three gatherings this fall on how "Fratelli Tutti," calls young people to aid "our wounded church and broken world.”

The series is a joint project of the Archdiocese of Washington and the Initiative on Catholic Social Thought and Public Life at Georgetown University.

Scholas Occurrentes -- a project of the pope's aimed at developing young adults' commitment to the common good that launched a Washington headquarters in May -- also assisted with the arrangements for the program. Subsequent sessions will be held Nov. 4 and Dec. 2.

In his opening remarks, Cardinal Gregory said young people, especially during the pandemic, have shown how to reach out for the common good across differences of nationality, faith and beliefs. That shows the rest of the world the way forward through dialogue and relationship, he said.

But he added, "Dialogue is not a one-and-done conversation. It is a process. That process includes discernment, accompaniment, listening and exchange.”

The Synod of Bishops opened a few days later with a Mass celebrated by Pope Francis at St. Peter's Basilica, where he said in his homily that a synod is a call to walk the same road as others, characterized by the verbs: to encounter, listen and discern.

In the Georgetown-hosted session, the other panelists joined Cardinal Gregory in pointing to "Fratelli Tutti, on Fraternity and Social Friendship," as a guide to healing the world through dialogue and friendship.

The holy texts of many faiths echo a call to care for one another, explained Omayma El Ella, project associate for the Democracy Fund's Just and Inclusive Society Project and former leader of Muslim leadership and public engagement at the Aziz Foundation.

She noted that numerous passages of the Quran, for example, "say you are not a true believer if you allow a neighbor to go hungry or you cheat them in any way." She said she feels very passionate about the shared teachings of compassion, even though humans exist among different tribes and nations.

One of the challenges Pope Francis posed in "Fratelli Tutti" took issue with "radical individualism," she said. "There are people in our faith communities who believe this idea that we should only care about our own actions and how they affect us individually.”

Such thinking is used to justify all sorts of behavior including racism, she said. But, she added, "we're taught to never show indifference to oppression. This is a muscle you have to exercise, by getting out of your comfort zone and being caring about others and seeing the ways in which your life is entwined with theirs.”

Two other panelists offered reports of their experiences in Haiti and Afghanistan this year. Reynold Hyppolite, head of youth programming for Catholic Relief Services Haiti, said there, "the situation is so alarming we are feeling we have hit bottom.”

In addition to crushing poverty, lingering effects of earthquakes and hurricanes and the assassination of President Jovenel Moïse in July, many Haitians are fleeing to other countries, he said. "Neighborhoods are deserted.”

Yet he still finds reason to hope with the country's young people. "They need a helping hand," with life skills and other types of education, but he sees resilience if they can get just a little help, he said.

Others in the panel included Muzhgan Azizy, a refugee from Afghanistan who recently came to the United States; Juan Aznaran, the partnerships manager for the Newcomer Network of Catholic Charities in the Archdiocese of Washington; and Gerald Smith Jr., principal at St. Thomas More Catholic Academy in Washington.

Azizy fled her home country this past summer and is resettling in Northern Virginia, assisted by Catholic Charities, she said. "I don't remember a time of stability and peace in my country.”

She was eligible for a Special Immigrant Visa because she worked with the U.S. government in Kabul, where she, her husband and 13-year-old son lived with her parents. While her husband and son came with her, her parents and siblings stayed behind, and she said she worries that they will be targeted for harassment or worse because of her.

She said her family has had to start everything from scratch in the United States, even with the help of the federal government and Catholic Charities.

Her son, for example, struggles to understand such rudimentary aspects of school as where to go for his classes, she said. In keeping with the theme of the discussion, she asked for patience and respect for her family as they become familiar with their new home.

Azizy said she worries about "how things I do affect my neighbors. ... What I expect from my neighbors and people of this great country is to be patient with us, to support us as we go through this difficult time of resettlement and adjustment.”

Aznaran of the Newcomer Network said when his family was new to the United States after moving from Peru, "People were so welcoming. It made such a huge difference. Unfortunately, we also saw the other extreme, in people who were not as welcoming.”

He said that in "Fratelli Tutti," he felt as though Pope Francis "was talking to teenage Juan about how we as Christians should be tearing down walls. It's really an invitation for all of us to think as a community ... to tear down the walls in our hearts.”

As a native Washingtonian, Smith said that he sees how the physical city itself has a role in whether people are made to feel welcome and safe.

He described watching gentrification that reinvigorates old neighborhoods and allows for bridges to be built between people of disparate communities.

At the same time, he said, it's important to build spaces where people of all backgrounds can comfortably interact, "spaces to truly shift cultures," and where the hard questions can be asked in a safe environment for all.