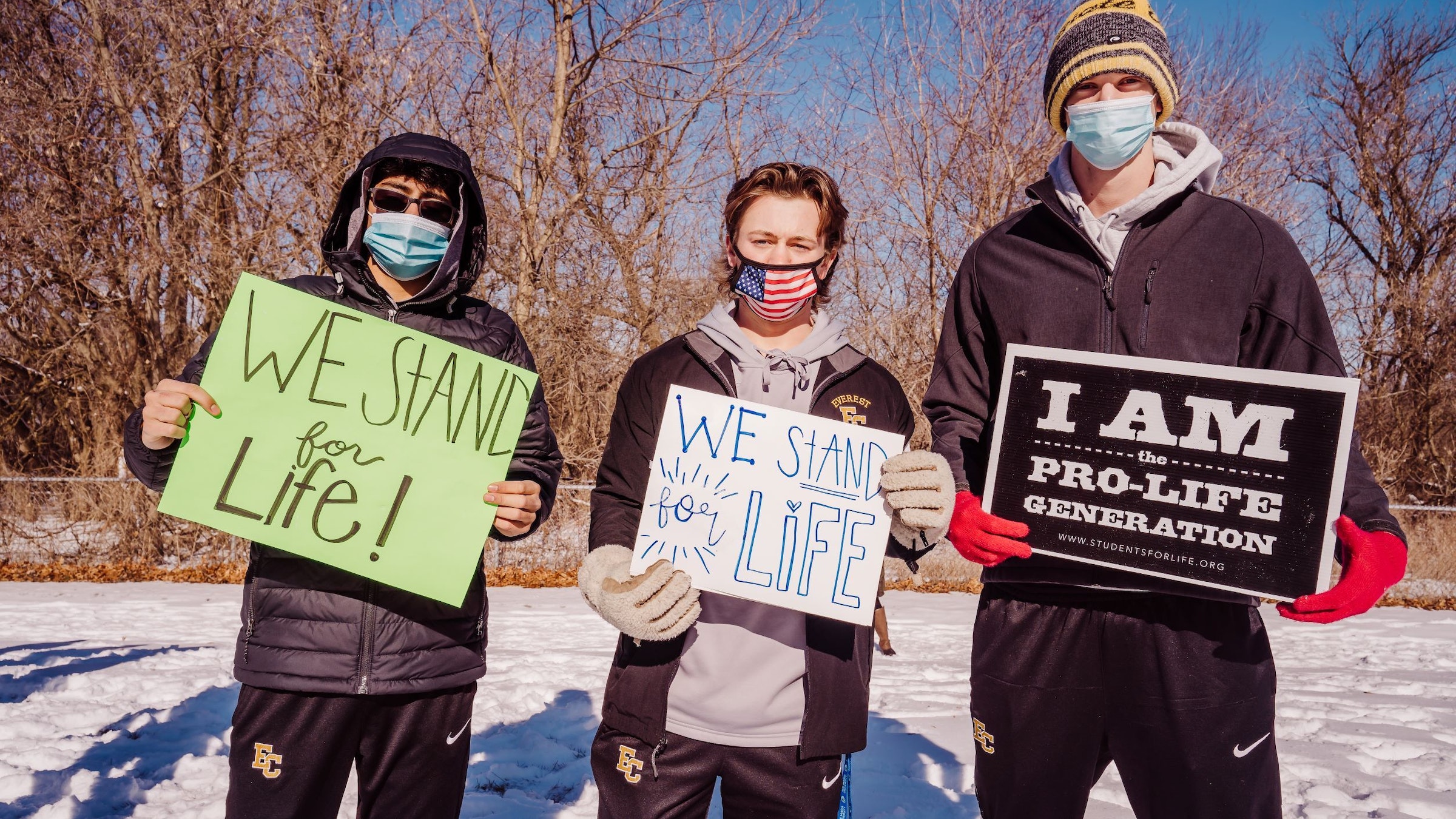 Students from Everest Collegiate High School and Academy in Clarkston hold signs during a local pro-life vigil last year in lieu of students' usual trip to Washington, D.C., for the March for Life. This year's march is expected to be similarly small, yet pro-life advocates remain excited at the prospect of a possible reversal of Roe v. Wade. (Valaurian Waller | Detroit Catholic)

Marchers will contend with COVID-19 restrictions in D.C., scaled-back events; Archdiocese of Detroit to host prayer vigil day of the march

DETROIT — Fr. Jim Kean and Footprints for Life Michigan are more than thrilled to be heading to this year’s March for Life in Washington, D.C., even if it might have a different feel than prior marches.

The fact that a march is happening at all — after the March for Life had a smaller gathering in D.C. and encouraged pilgrims to join virtually in 2021 — is a blessing, Fr. Kean said. This year's march is happening in person Friday, Jan. 21, albeit numbers are expected to be smaller.

Fr. Kean is chaplain for Footprints for Life Michigan, which will have 110 people in two buses going to Washington this year.

The group won’t be visiting its usual restaurants and spots around the capital, and will forgo the Vigil for Life at the Basilica of the National Shrine of the Immaculate Conception the night before the march. Even the popular Youth Rally and Mass hosted by the Archdiocese of Washington is canceled this year.

But the loss of such opportunities can lead to other ones, Fr. Kean said.

“It is a sacrifice, but it’s a good reminder for us that we are about the march,” Fr. Kean, pastor of St. Joseph Parish in Lake Orion and St. John Fisher Chapel University Parish in Auburn Hills, told Detroit Catholic. “We are seeing the first serious consideration of overturning Roe v. Wade, and for those who’ve been doing the march for years, we want to be there for this historic year.” 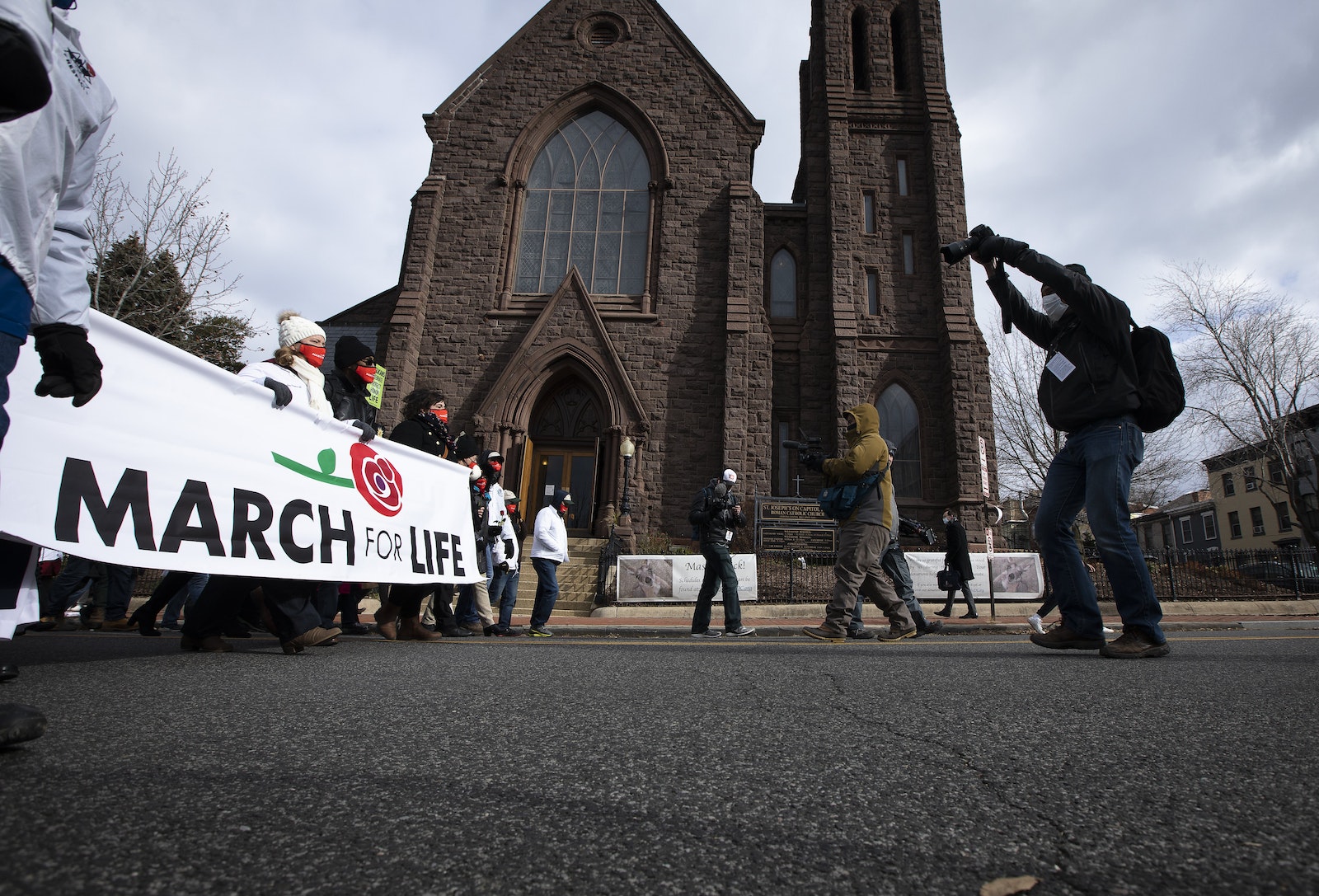 March for Life participants walk past St. Joseph's on Capitol Hill Church on their way to the U.S. Supreme Court building in Washington Jan. 29, 2021, amid the coronavirus pandemic. (CNS photo/Tyler Orsburn)

The annual March for Life commemorates the Jan. 22, 1973, Roe v. Wade U.S. Supreme Court decision, which legalized abortion nationwide. This year’s march takes place in the foreground of the upcoming Dobbs v. Jackson Women’s Health Clinic decision slated to be announced this summer, adding to the excitement for this year's march.

Footprints for Life is partnering with Farmington Hills Mercy and Warren Regina high schools, as well as Novi Detroit Catholic Central, who will travel with the group. The group will stay in Falls Church, Va., the night before the march, where they will celebrate Mass at St. James Parish with pastor Fr. Paul Scalia, son of the late U.S. Supreme Court Justice Antonin Scalia.

“We’re looking for smaller venues that are spiritually enriching, so we’re not putting people at risk (of COVID-19) that you’d get at the (Verizon Center) or the rally,” Fr. Kean said. “On the day of the march, we’ll have Mass in the morning, breakfast at the hotel, depart later than we normally would, and instead of trying to get to some of the many elements of the march early, we’ll stay at St. James, keep it spiritual, go to the National Mall for the life speakers, then march, ending at St. Peter’s Church on Capitol Hill.”

The Archdiocese of Detroit has a series of events related to the march, including a livestream rosary at noon the day of the march, a young adult Holy Hour for Life at Our Lady of the Rosary Church in Detroit at 7 p.m., and a Mass for the Protection for the Unborn at the Cathedral of the Most Blessed Sacrament on Sunday, Jan. 23, at 11 a.m. 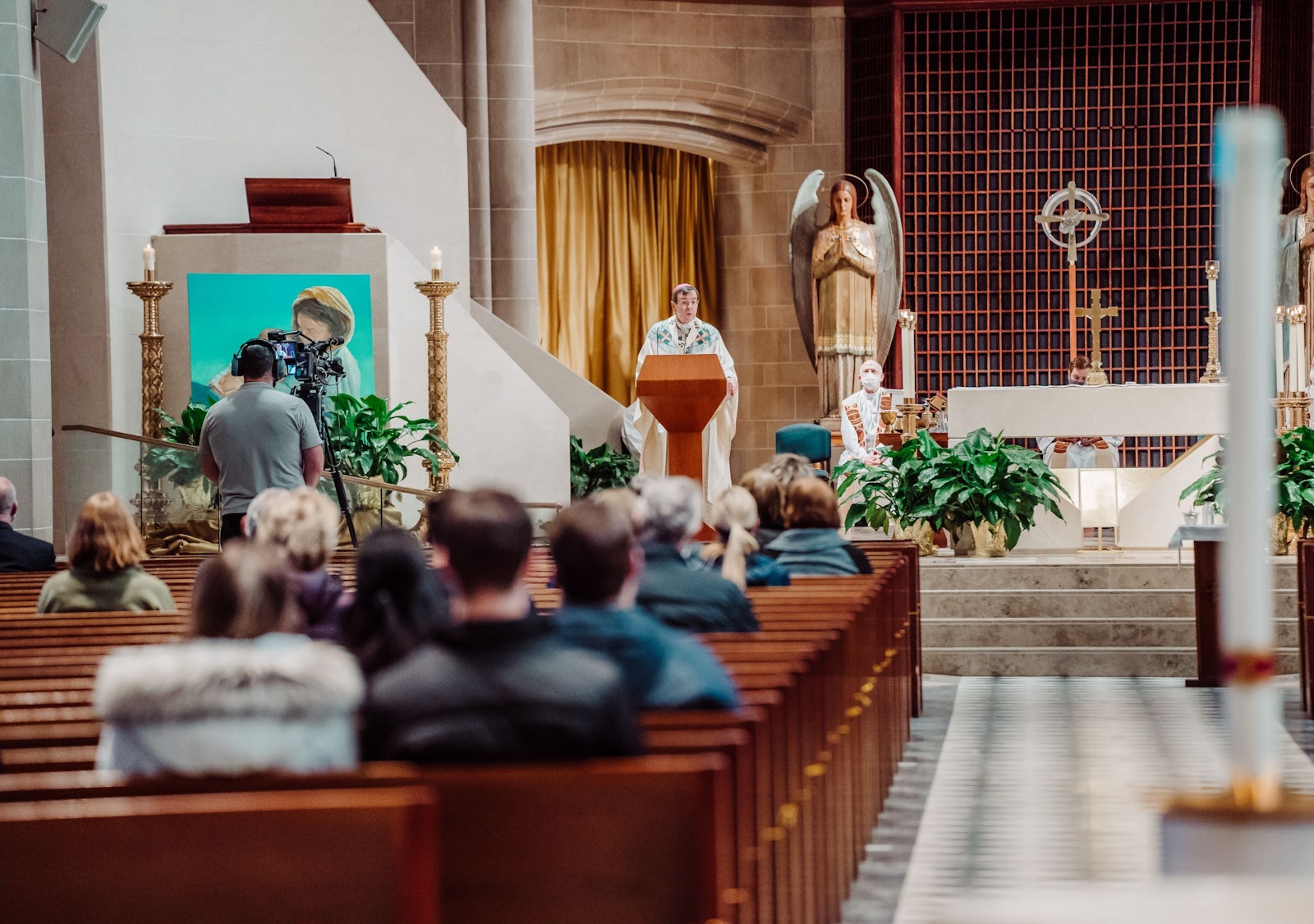 Archbishop Allen H. Vigneron preaches last year during a Mass for the Protection of the Unborn at the Cathedral of the Most Blessed Sacrament in Detroit. The archbishop will celebrate the Mass again this year at 11 a.m. Sunday, Jan. 23. (Valaurian Waller | Detroit Catholic)

“We would love to fill the cathedral for that, knowing many pilgrims will not be able to travel to D.C.,” said Kathleen Wilson, coordinator of pro-life ministries for the Archdiocese of Detroit. “Online, we have a list of 17 wonderful outreach, evangelical charity service projects young people or families could do to defend the vulnerable, to be in solidarity with the unborn, to reach out to moms in need.”

Even if Roe is overturned, Wilson said, it is incumbent on pro-life advocates to do more than just attend the March for Life.

“Being pro-life is not about joining a movement or being part of a political event; it’s part of our baptismal call to live a consistent life ethic, and this is a beautiful opportunity as we commemorate those vulnerable who have lost their lives,” Wilson said. "This is a chance to re-examine our own witness to the sanctity of life, beginning with our own, recognizing our own identity as a beloved son and daughter of God.”

Other events around the state include a memorial and march in Lansing on Jan. 19 at 1 p.m. at the state Capitol, hosted by Right to Life of Ingham County. 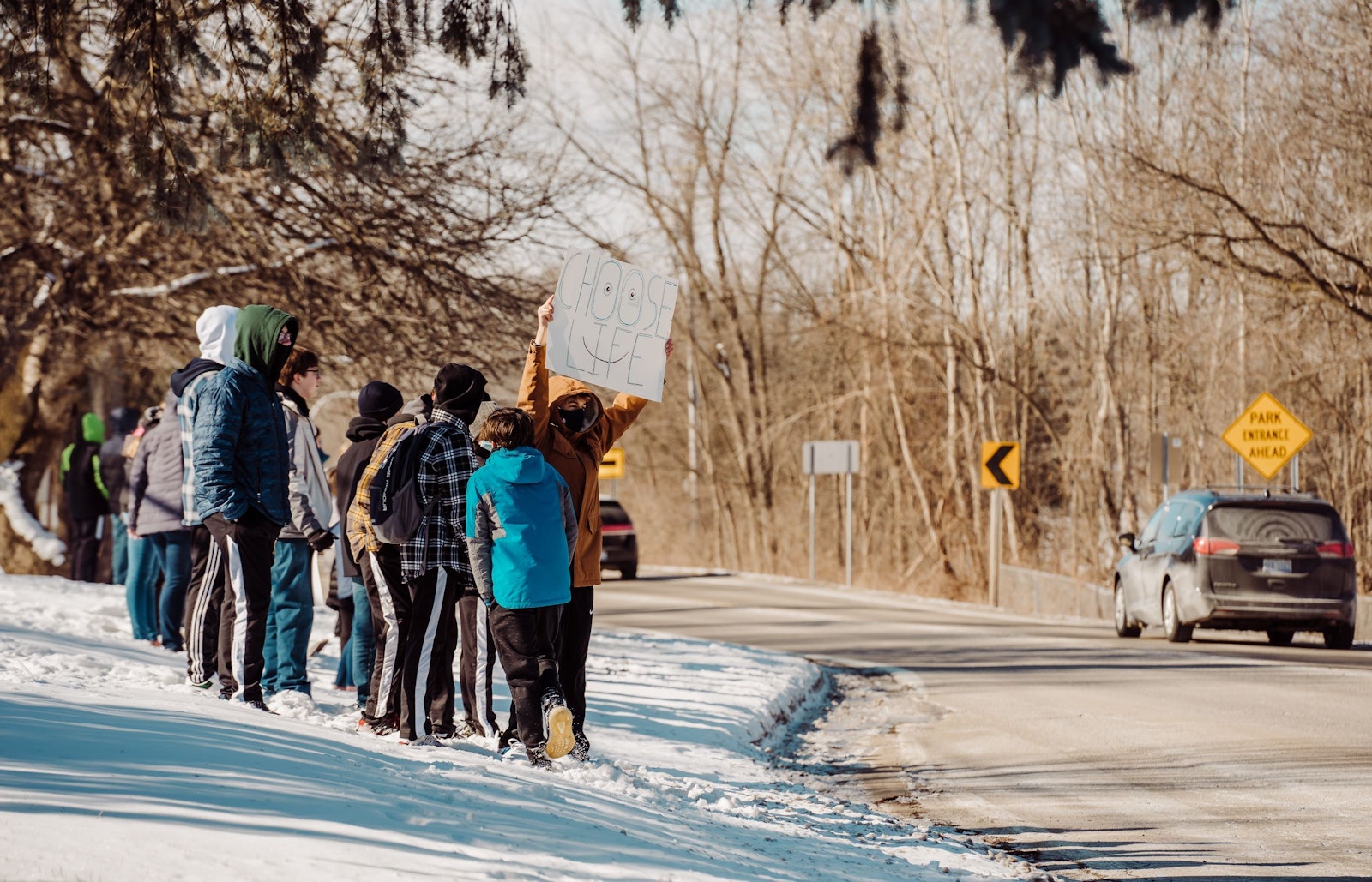 Leach said its incumbent on each Family of Parishes to assess the particular pro-life needs in their geographic area in order to respond to those needs.

“It’s a huge blessing we started 'Walking with Moms in Need' right before Families of Parishes were announced,” Leach said. “Instead of each parish trying to do their own thing, families (of parishes) can do something together, knowing it will make a bigger impact.”

Even if Roe v. Wade is overturned, and the abortion debate is kicked to the states — there is currently a movement to enshrine abortion as a right in the Michigan constitution — the pro-life movement's mission of caring for the poor, the unborn, mothers, the elderly, the environment, the rights of workers and the dignity of all remains.