Pope: Euthanasia legislation in Europe is sign of 'throwaway culture’ 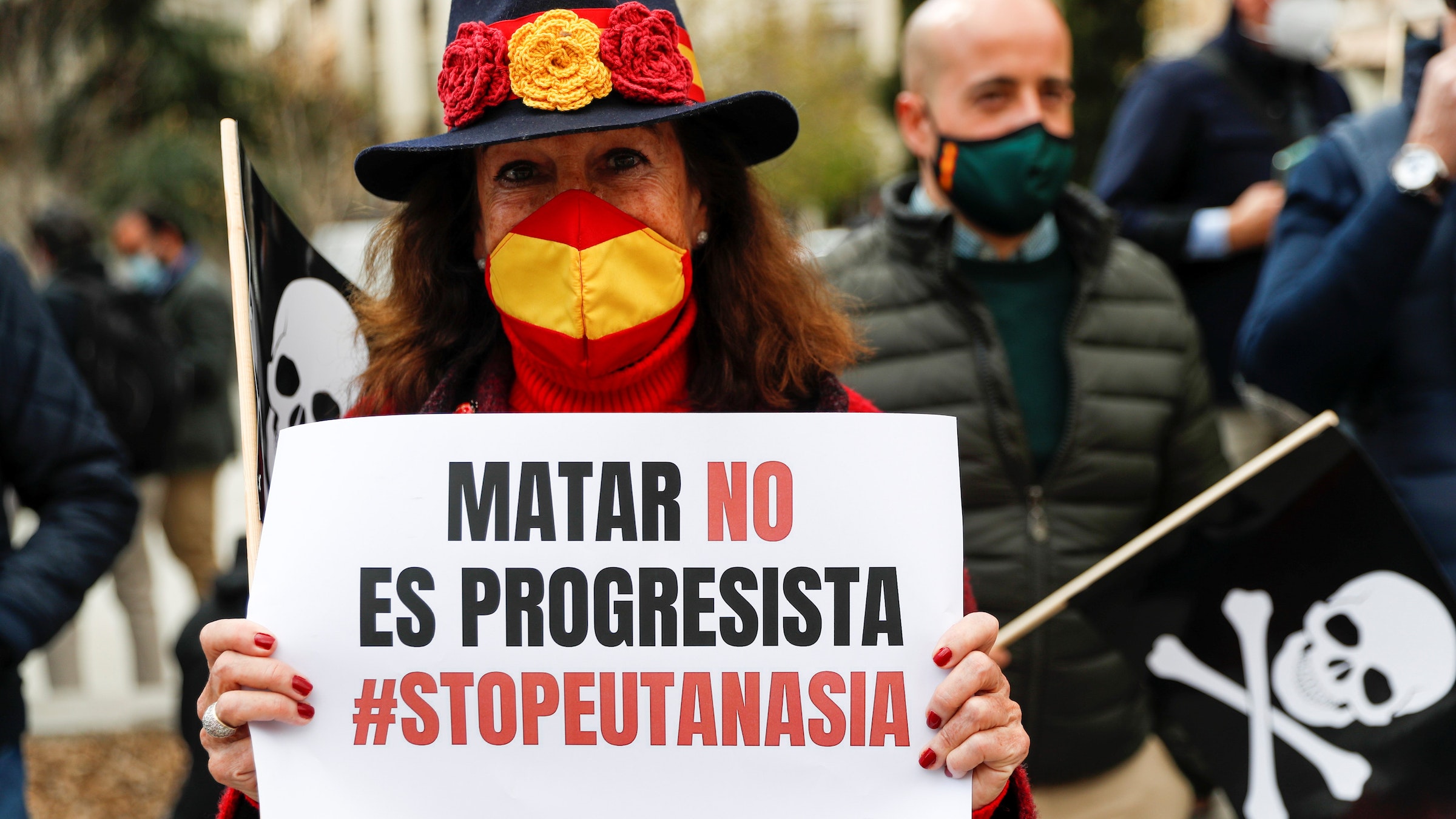 A woman protests against a law to legalize euthanasia as the Spanish Parliament votes to approve it in Madrid March 18, 2021. Her sign reads "Killing is not progressive, stop euthanasia." Increasing calls to legalize euthanasia in several European countries, as well as the disregard for vulnerable people and the unborn, are signs of a "throwaway culture" that is gaining ground across the continent, Pope Francis said in an interview. (CNS photo/Susana Vera, Reuters)

VATICAN CITY (CNS) ─ Increasing calls to legalize euthanasia in several European countries, as well as the disregard for vulnerable people and the unborn, are signs of a "throwaway culture" that is gaining ground across the continent, Pope Francis said.

"What is (deemed) useless is discarded. Old people are disposable material; they are a nuisance. Not all of them, but of course, in the collective subconscious of the throwaway culture, the old, the terminally ill, and unwanted children, too; they are returned to the sender before they are born," the pope said in an interview with COPE, the radio station owned by the Spanish bishops' conference, broadcast Sept. 1.

"This throwaway culture has marked us. And it marks the young and the old. It has a strong influence on one of the tragedies of today's European culture," he said.

In March, Spain's parliament passed a law legalizing euthanasia in the country, making it the fourth European country to legalize physician-assisted suicide after Belgium, the Netherlands and Luxembourg.

Other European countries, such as Germany, Austria, Switzerland, Finland and Norway, allow for what is known as "passive euthanasia," in which patients, under strict circumstances, can elect to not receive treatments, such as nutrition or hydration, that would prolong their lives.

Recently, in Italy, 750,000 people signed a petition to abolish a clause in the Italian criminal code that makes assisted suicide punishable by five to 12 years in prison.

Supporters of euthanasia, the pope said, often use "the idea of compassion, 'that this person may not suffer.' But what the church is asking is to help people to die with dignity. This has always been done."

Pope Francis also lamented "the demographic winter" in Europe, particularly due to increased cases of abortion.

The pope said that while he does "not like to enter into discussions" on whether abortions are "possible up to here or whether it is not possible up to there," what is indisputable is the existence of human life.

"Any embryology manual given to a student in medical school says that by the third week of conception, sometimes before the mother realizes (that she is pregnant), all the organs in the embryo are already outlined, even the DNA. It is a life, a human life.

During the interview, the pope was also asked by COPE about the migration crisis in Europe and what approach should be taken by countries skeptical of welcoming those who cross into their borders.

Citing the 2016 terrorist attack in Zaventem, Belgium, the pope noted that those who committed the attack were Belgian-born "children of immigrants who were not integrated" into society.

He also highlighted the need for "dialogue between nations" and that countries must be "honest with themselves" and see how many migrants they can accept into their territory.

"And then there is also a reality regarding migrants -- I have already referred to it, but I'll repeat it -- the reality of the demographic winter. Italy has almost empty villages," Pope Francis said.

"What are you waiting for, to be left with no one? It is a reality. In other words, migration is a help as long as our steps toward integration are fulfilled. That is my position. But of course, a country must be very honest and say: 'this is as far as I can go,'" he said.