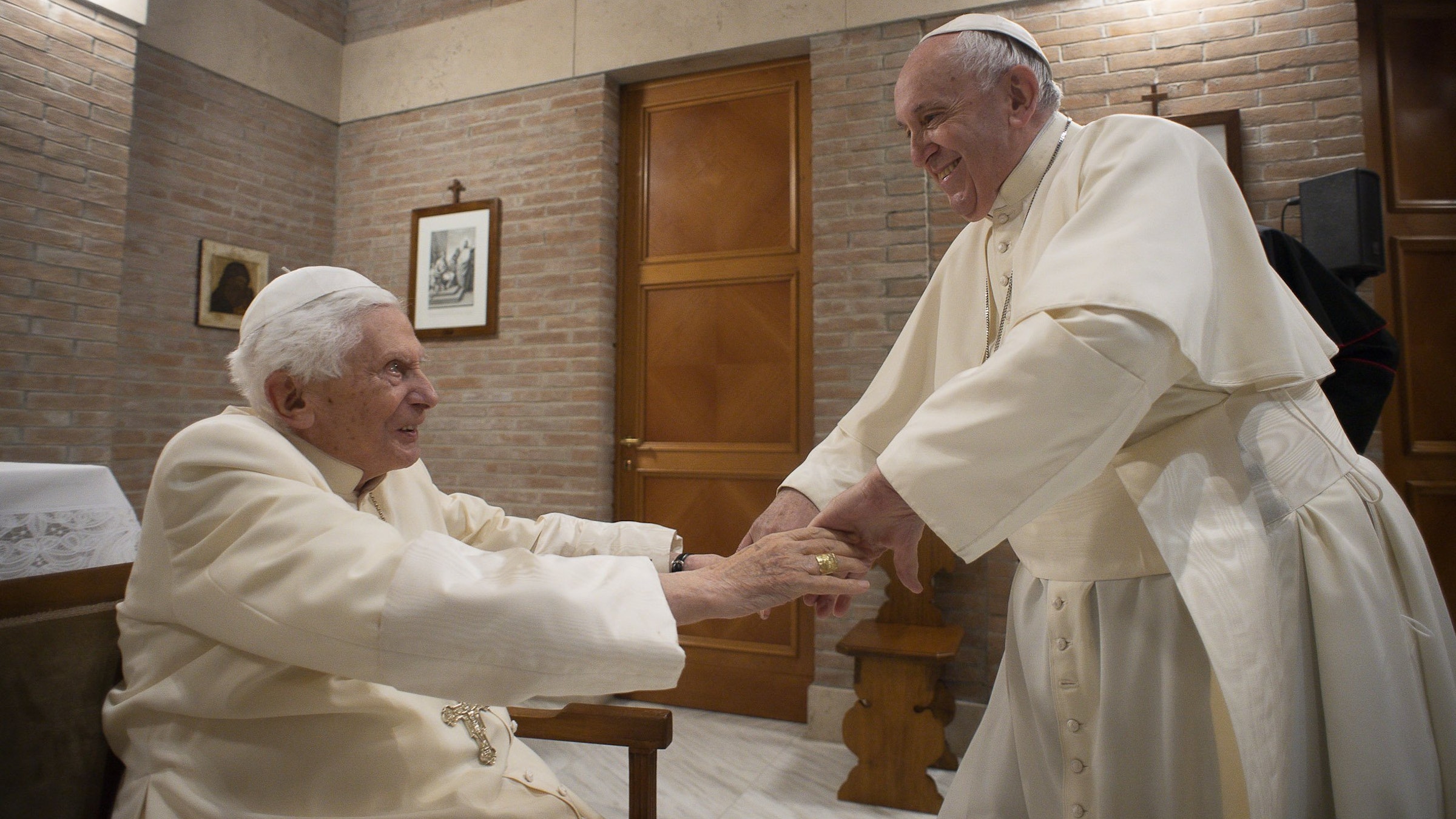 Pope Francis greets retired Pope Benedict XVI at the retired pope's residence during a visit with new cardinals after a consistory at the Vatican Nov. 28, 2020. (CNS photo/Vatican Media)

VATICAN CITY (CNS) –– Pope Francis praised his predecessor's courage in denouncing the danger of people no longer respecting or understanding the sacredness of human life.

The pope's remarks were part of an introduction he wrote for a new book, "The True Europe. Identity and Mission," which compiles selected texts by Joseph Ratzinger/Benedict XVI on the theme of Europe. The book, currently in Italian, is one of a series of "selected texts" being published by Cantagalli press and coincides with the 50th anniversary of diplomatic relations between the Holy See and the European Union.

Vatican News republished a copy of the introduction Sept. 12.

"Beyond the many words and grandiose proclamations, today, the idea of respect for every human life is increasingly lost in Europe, starting with the loss of awareness of its sacredness, that is, precisely from the obfuscation of the awareness that we are creatures of God," Pope Francis wrote.

"Benedict XVI has not been afraid over the years of denouncing with great courage and far-sightedness the many manifestations of this dramatic renunciation of the idea of creation" and its consequences, he wrote.

And yet, the retired pope also showed his hope and faith in knowing humanity will always be restless until they find God and discover his truth, Pope Francis wrote. He added that the volume clearly explains the current reality but without leaving the reader feeling pessimistic or sad.

On the contrary, Pope Francis said Pope Benedict explains the reasons for his hope, saying the desire and search for God is profoundly inscribed in each human soul and cannot disappear.

"Certainly we can forget God for a time, lay him aside and concern ourselves with other things, but God never disappears," Pope Benedict said in a 2012 interview, published in the book. "St. Augustine's words are true: We men are restless until we have found God. This restlessness also exists today and is an expression of the hope that man may, ever and anew, even today, start to journey toward this God."

Pope Francis wrote this was the secret for how to have hope during these difficult times and "Pope Benedict XVI shows us the path to take for Europe's renewal.”