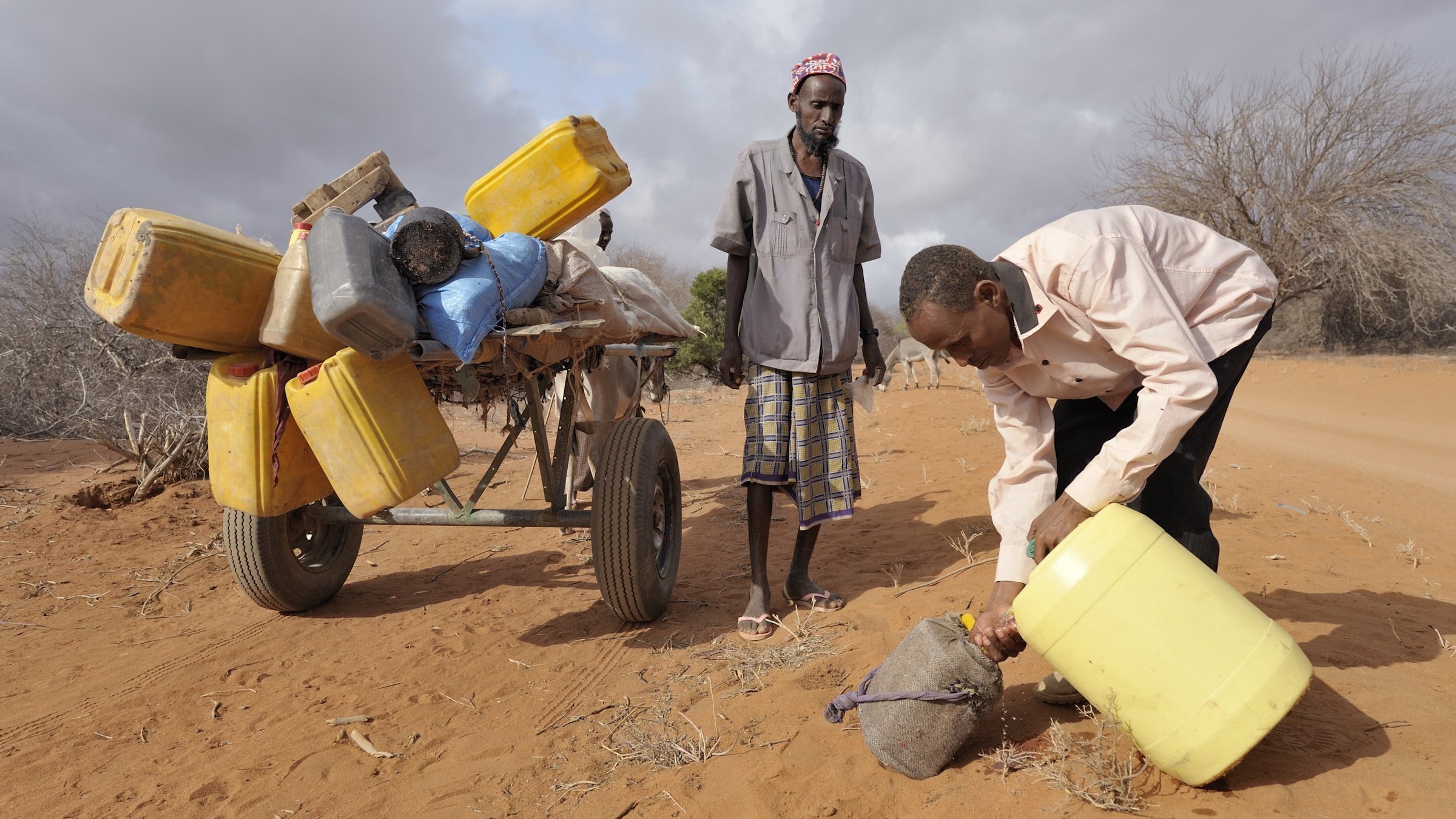 Adow Ibrahim Ali, right, is pictured in a file photo providing water to Ibrahim Osman Mohammed in a remote section of eastern Kenya near the Somali border. Traveling with his cousin, Mohammed left his home in Buale, Somalia, three weeks earlier because severe drought killed most of their animals. (CNS photo/Paul Jeffrey)

VATICAN CITY (CNS) -- While praising schools and universities that have developed education programs specifically for migrants and refugees, Pope Francis told them they also have work to do with their own students and staff.

"Every educational institution is called to be a place of welcome, protection, promotion and integration for all, to the exclusion of none," the pope said Sept. 29 in a meeting with people attending an international conference on offering education and training for migrants and refugees in camps, online and in host countries.

The conference Sept. 26-28 was sponsored by the Pontifical Gregorian University and the Refugee and Migrant Education Network. Filippo Grandi, the U.N. high commissioner for refugees, and Inna Sovsun, a member of the Ukrainian parliament and former first deputy minister of education and science, were among the conference speakers.

Pope Francis praised participants for looking at initiatives "grounded in the needs of our migrant brothers and sisters, with particular attention to children and young people. You have heard their desire to pursue their education even though they have been uprooted from their native lands."

The focus on education is essential, he said, because migrants and refugees need more than permission to enter a safe country, he said. They must be "welcomed, accompanied, promoted and integrated."

Universities, especially Catholic universities, should look at better ways to assist migrants and refugees, and they should explore the contributions their research can make to understanding migration, Pope Francis told them.

People have a "right not to emigrate," he said, but that requires tackling the violence, discrimination and extreme poverty that make people feel they have no choice but to leave their countries.

And, he said, the relationship between migration and "another kind of violence, namely, the abuse of our common home," needs deeper academic study.

"The earth has been devastated by the excessive exploitation of its resources and by decades of pollution," he said. "As a result, more and more people are forced to leave their lands, which have become uninhabitable."

In direct service to migrants and refugees, Pope Francis asked the universities to expand distance-learning opportunities, increase their scholarships to migrant and refugee students and cooperate with each other to "facilitate the recognition of the degrees and professional qualifications" the migrants and refugees already earned at home. Such recognition, he said, is for the good of the newcomers, but also for their host communities.

And, he said, on their own campuses, schools and universities must educate their students about migration and create welcoming communities for newcomers.

"Schools and universities are privileged environments not only for instruction but also for encounter and integration," the pope said. "Catholic institutions of higher learning are called to educate their own students, who will be tomorrow's administrators, entrepreneurs and cultural leaders, to a clearer understanding of the phenomenon of migration, within a perspective of justice, global responsibility and communion in diversity."

Pope Francis asked the universities to offer opportunities for "meaningful encounters" with newcomers "so that teachers and students can have an opportunity to hear the stories of those men and women who are migrants, refugees, displaced persons or victims of trafficking."