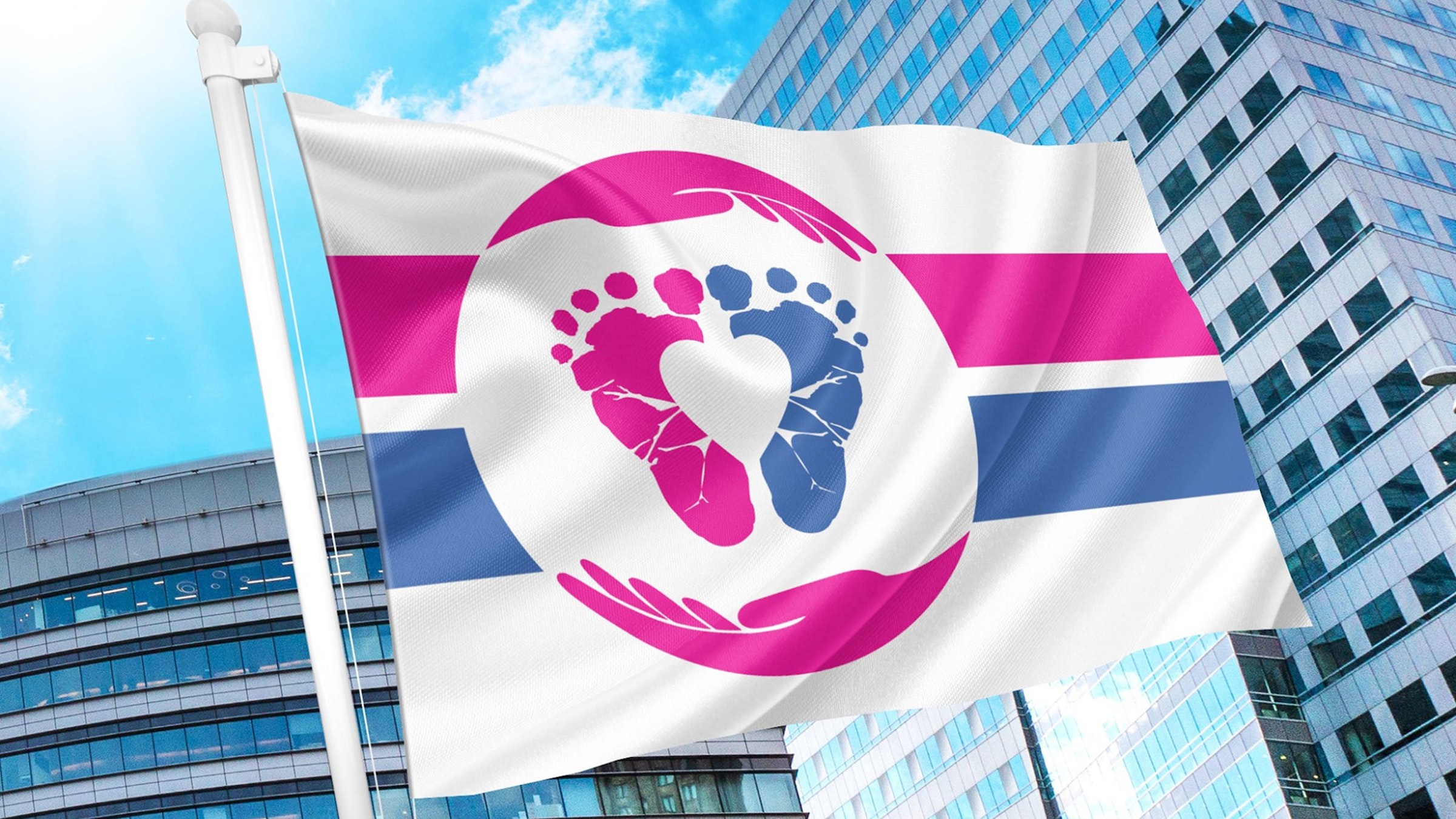 Nanda Gasperini, a pro-life graphic artist in São Paulo, Brazil, designed this pro-life flag, seen in this undated photo. It was selected in an online vote in mid-July 2021 as the international symbol of the pro-life movement. (CNS photo/courtesy Pro-Life Flag Project)

BALTIMORE (CNS) -- The rainbow flag is an instantly recognized symbol of the LGBTQ movement, just as the Thin Blue Line flag is synonymous with support for law enforcement.

Now, leaders in the pro-life community hope a new flag featuring baby's feet held in a mother's hands will serve as the universal symbol for protecting the lives of the unborn.

The new flag was selected in an online vote organized by the Pro-Life Flag Project, a grassroots effort involving over 70 partners including the March for Life Education and Defense Fund, Students for Life of America, New Wave Feminists, Democrats for Life, Save the Storks, Maryland Right to Life and Focus on the Family.

James Chapman, spokesman for the Pro-Life Flag Project, said Will McFadden, the project's founder, conceived the idea in 2017 while attending the March for Life in Washington, where he observed no unifying symbol.

The effort gathered steam as McFadden saw the rainbow flag become increasingly entrenched in the culture.

Chapman said there were "several thousand" entries in the international design contest for the pro-life flag. Two rounds of final online voting in mid-July resulted in nearly 6,000 votes cast, he said.

The winning flag, which features two stripes that highlight the two distinct lives present in a pregnancy, came out on top among three design finalists. It was designed by Nanda Gasperini, a pro-life graphic artist in São Paulo, Brazil.

Erin Younkins, director of the Office of Life, Justice and Peace in the Archdiocese of Baltimore's Institute for Evangelization, said she hopes the new flag will be a source of unity in what she sees as a sometimes fractious pro-life movement.

"There is a lot of division in the movement with different political ideologies and different religious backgrounds and motivations," Younkins told the Catholic Review, the Baltimore Archdiocese’s news outlet. "Especially last year, we saw a lot of friendly fire and fighting among pro-life groups.”

Younkins, a parishioner of St. Peter in Libertytown, Maryland, said the flag clearly reminds all pro-life supporters that fighting to protect the lives of the unborn is what they share in common.

"Bringing the movement together as much as we can is an important goal for me," she said. "I think the fact that it's being done on a national and international level is really exciting.”

Some social media commentators have criticized the winning flag's design because it focuses solely on the protection of the unborn and leaves out other pro-life concerns such as outlawing the death penalty and assisted suicide.

Chapman noted the message on abortion was the "singular issue" the Pro-Life Flag Project sought to represent.

"Throughout the course of the project, we received a few requests to broaden the scope of the flag to include different topics other than the anti-abortion, pro-life message," he said. "These requests, however, varied significantly and were often at odds with each other.”

The winning flag includes a white background that symbolizes nonviolence in the womb as well as the innocence of the unborn child. A white heart in between baby's feet symbolizes the pro-life movement's love for both the mother and her child, according to the Pro-Life Flag Project's website.

The featured pink and blue colors are associated with baby boys and girls, but also reemphasize the two lives of the mother and child. The stripes form an equal sign, which the Pro-Life Flag Project said emphasizes that the unborn child is "equally and fully human, and therefore deserving of equal human rights," while also representing the role of both the father and mother in creating and raising a child.

If the flag is flown ubiquitously, Chapman said, it will raise awareness for the pro-life cause among both pro-life advocates and those who support choice on abortion.

"We think that the existence of a pro-life flag will allow the everyday pro-lifer to show support and stand in visible solidarity with the worldwide movement," he said.

Chapman said he hopes the symbol gets used "in any possible way that it can be helpful to the pro-life movement.”

"We hope to see the pro-life symbol on clothing, lapel pins, magnets, yard signs, pro-life pictures, logos, banners and more," he said. "We hope it becomes as prominent as the rainbow flag.”

The Pro-Life Flag Project is arranging flag licensing so that any pro-life, nonprofit organization may freely copy, reproduce, promote and sell any products containing the design. The design may not, however, be used as an organization's official logo.