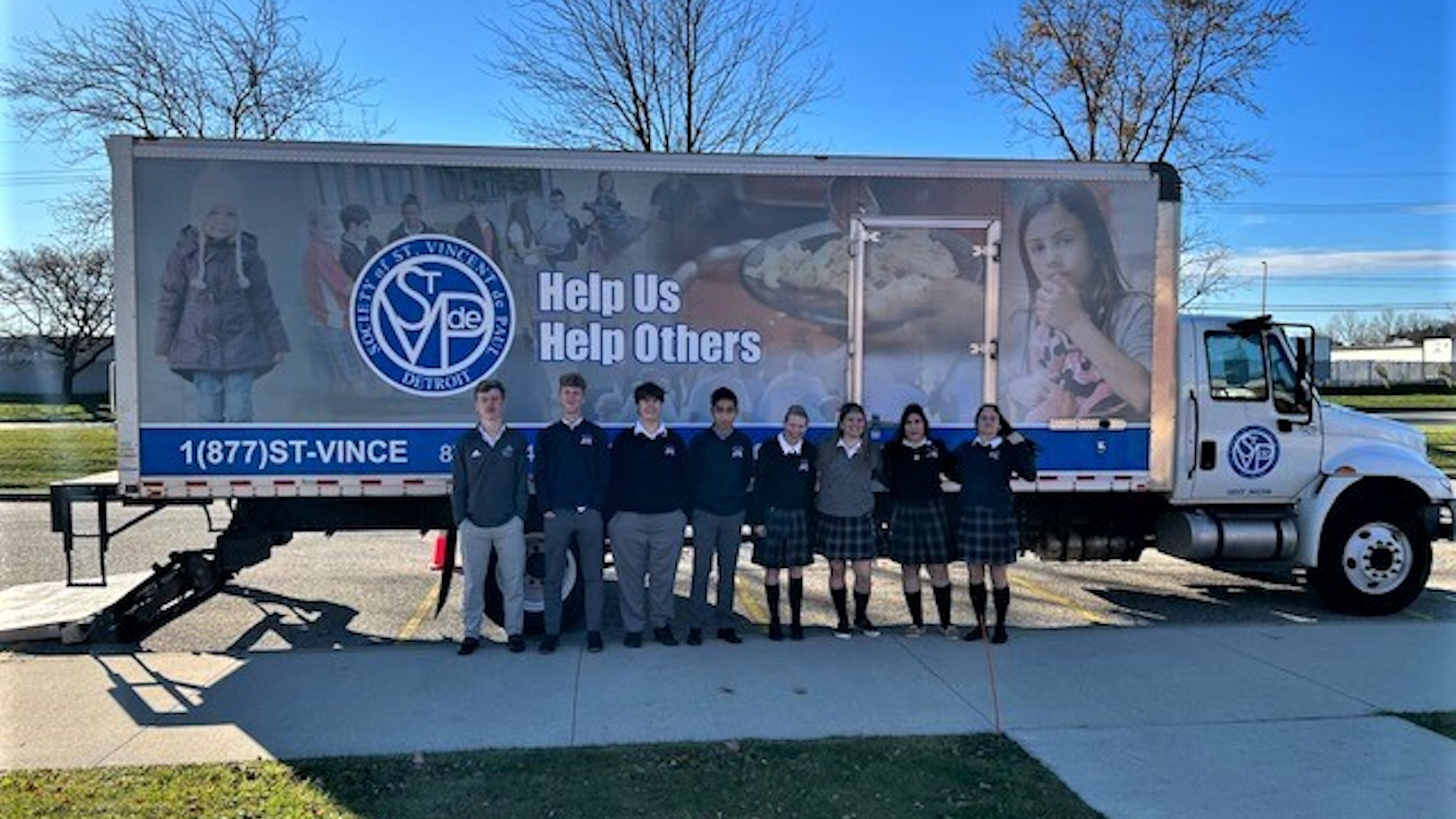 “Helping out is a constant thing” for Austin Catholic students. An ambitious two-week campaign to fill this truck with clothing for the Society of St. Vincent de Paul is just one of a variety of initiatives such as food drives for area parish pantries, delivering Christmas gifts for homeless shelters and care packages for the military. (Courtesy of Austin Catholic)

CHESTERFIELD TOWNSHIP — “The Champions of Charity” campaign was a clothing drive for the benefit of the Society of St. Vincent de Paul sponsored by the Catholic High School League.

Held in conjunction with the CHSL Prep Bowl festivities usually in October, each member school of the league encouraged students to collect as much clothing as possible in a week’s time. The school that collected the most total pounds was awarded the “The Champions of Charity” trophy.

Riverview Gabriel Richard High School won the trophy four years in a row from 2015 to 2018.

In 2019, Jim Baker, assistant principal and athletic director at Austin Catholic, petitioned CHSL director Vic Michaels to amend the method of determining the trophy winner from total pounds collected to dividing the total pounds by the school’s enrollment.

“When the league did that, we won by almost 30 pounds average per student,” Baker said. “We blew everyone out of the water.”

The COVID pandemic wiped out the option for a clothing drive in 2020, and league athletic directors voted not to continue the drive this year.

Austin Catholic, however, “felt that this was a cause worth continuing and reached out to the Society of St Vincent de Paul and inquired about doing a clothing drive on our own," Baker said. "They agreed.”

A St. Vincent de Paul truck was parked in front of the school from Friday evening, Nov. 19, through Monday morning, Nov. 22.

“Our small but mighty community of 103 students filled the truck with the help of the Chesterfield community," Baker said. "Our students and parents volunteered all weekend to help load the truck with donations.”

A two-week campaign spread the word about the need through social media, email, contacts with parents and alumni, word of mouth, and the scrolling electronic sign in front of the school on heavily traveled 23 Mile Road. 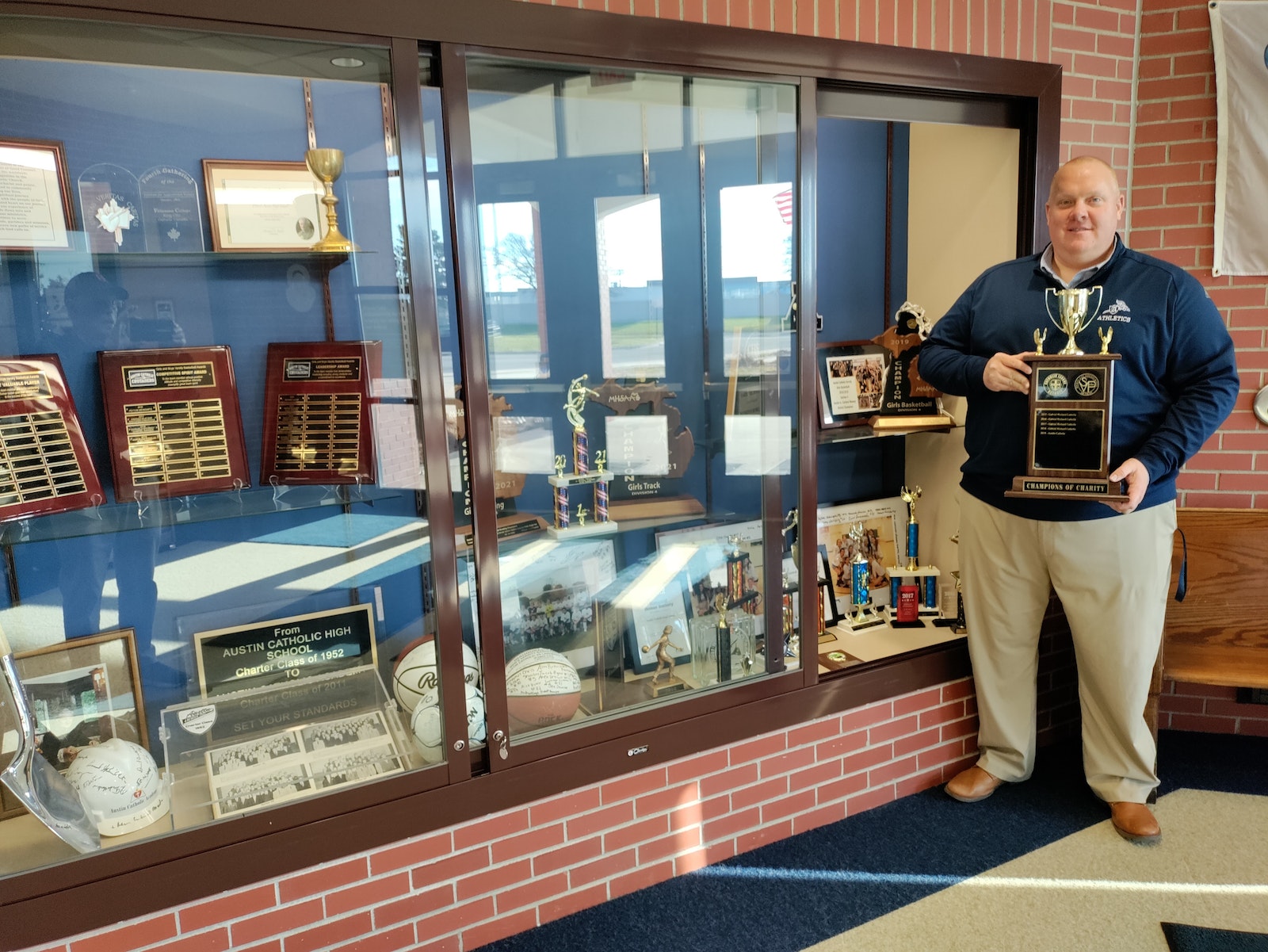 Austin assistant principal and athletic director Jim Baker holds the “Champions of Charity” trophy that has occupied the Austin Catholic trophy case since the school won the award in 2019. When the Catholic League decided to not sponsor the clothing drive this year, Austin went on its own to fill a truckload for the Society of St. Vincent de Paul. (Photo by Don Horkey | Special to Detroit Catholic)

This fall, students have conducted food drives for the pantries at St. Peter Parish in Mount Clemens and nearby St. Francis-St. Maximilian Kolbe Parish down 23 Mile at North Avenue, toys for the “Toys for Tots’ drive at Selfridge Air National Guard Base, toiletries and Christmas gifts for homeless shelters, and care packages for soldiers.

“Helping out is a constant thing,” Baker said. “It’s a very important part of our culture helping out the community, helping out others. That was a driving factor in doing the clothing drive on our own. We thought it was important. It’s who we are.”

Senior Will Weingartz offered a student’s perspective. “Coming to Austin, I realized I’ve been blessed more than others and I feel I should give some of that to those less fortunate.”

Weingartz, who plans on attending Michigan State University next fall, said, “It’s not hard to get kids involved. They might not think it’s the cool thing to do, but there’s no shame in bringing in clothes or canned food.”

Baker said the St. Vincent de Paul storefront in Utica will be closing and moving to another location next year.

“They’ve reached out to us (to ask) if we’d do a school service day on Martin Luther King Day in January and help them pack and move the entire site. I told them we have a 103 students who would be willing to help out. We’re waiting to hear from them.”

Turning to the athletic program, Baker said, “We are continuing to grow. We have a full boys varsity and junior varsity squads, and after not having girls basketball last year, we have a JV girls team.”

He showed off a gleaming 1,000-square-foot weight room made possible by a donation from the Austin Friar Alumni.

“We need to get back into the weight room,” basketball coach Ron Glodich laughed. “We’re back in the Catholic League and we’re finding it to be very physical. But the boys are getting used to it.” Austin is 1-4 in pre-holiday contests.

Glodich retired two years ago after 33 years at Marine City High, whom he coached to the 2013 Division 4 state football title. “I’m enjoying it at Austin,” he said.

“We knew we’d take our lumps. But it was important for us to get back into the Catholic League,” Baker said.

“Someday, we’d like to add football,” Baker said. “The Friar Alumni have set aside money for uniforms and equipment.”