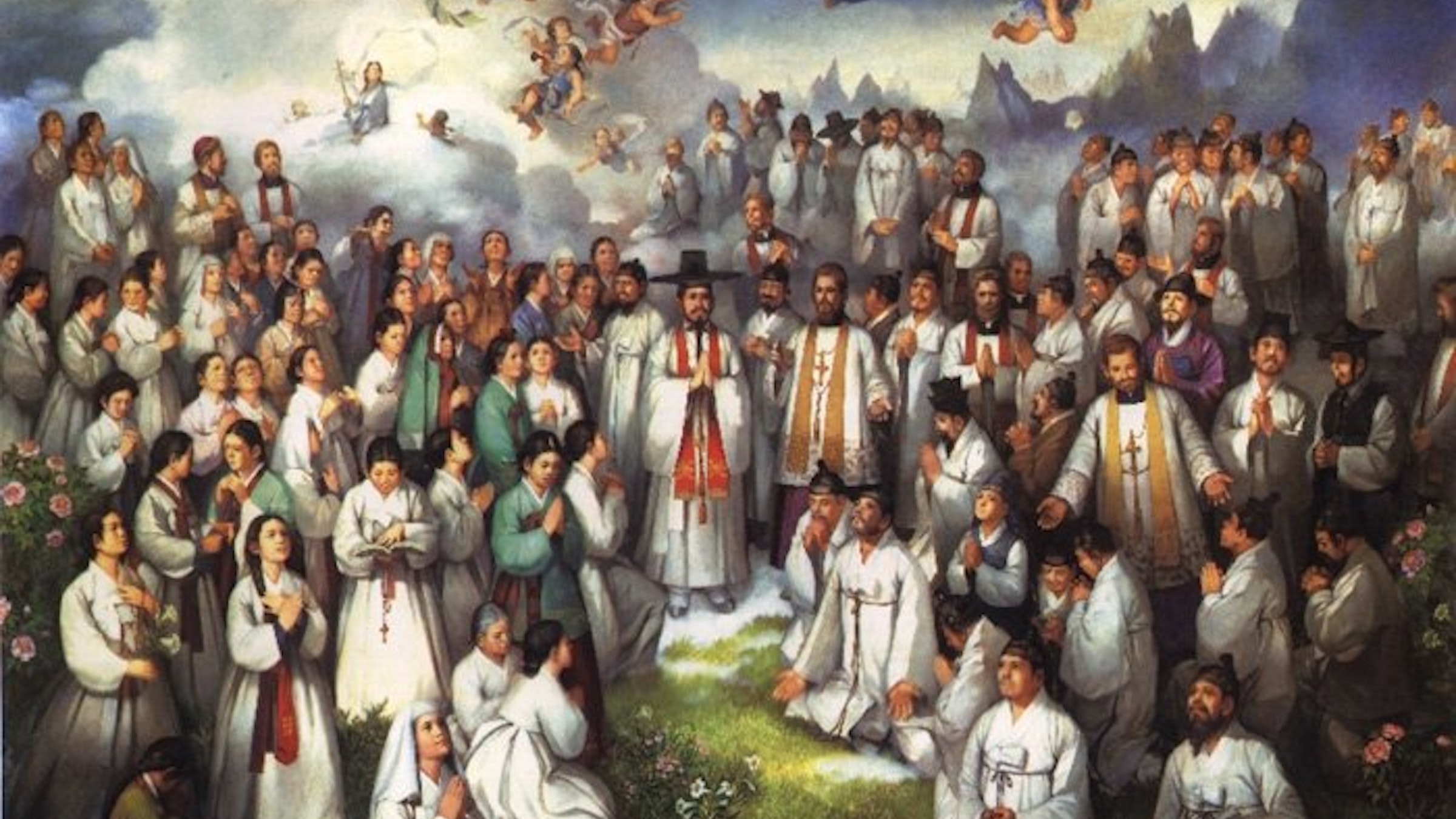 A painting depicts 103 Korean martyrs canonized by Pope John Paul II in 1984, seen in this Aug. 19, 2008, photo. The remains of the first three of 124 other Korean martyrs, beatified in 2014, were recently identified. (CNS photo/courtesy Archdiocese of Seoul)

SEOUL, South Korea (CNS) ─ The mortal remains of the first three Korean Catholic martyrs have been recovered more than two centuries after their deaths, announced the Diocese of Jeonju.

Ucanews.com reported that following historical research and DNA tests, it has been confirmed that the remains are of Paul Yun Ji-chung and James Kwon Sang-yeon, both beheaded in 1791, and Yun's brother, Francis Yun Ji-heon, who was martyred in 1801. Bishop John Kim Son-tae of Jeonju made the announcement during a news conference Sept. 1.

During his visit to South Korea in 2014, Pope Francis beatified the three along with 121 other martyrs persecuted and killed during the rule of the Joseon dynasty in Korea.

Bishop Kim said the remains were recovered in March in Wanju, on the outskirts of Jeonju, near the burial ground of family members of another beatified person that was being converted to a shrine.

"The discovery of the remains is a truly amazing and monumental event," the bishop said, according to Yonhap News Agency.

"This is because our church, which has grown on the foundation of the bloodshed by martyrs, has finally found the remains of the people who began the history of martyrdom."

The diocese said the remains showed cuts made by a sharp object around the necks of Paul Yun Ji-chung and Kwon, and around the neck, upper arms and left femur of Francis Yun Ji-heon.

Christianity came to Korea during the Japanese invasion in 1592, when some Koreans were baptized, probably by Christian Japanese soldiers, according to church sources. It started as a lay movement. Korean Yi Seung-hun, who was baptized in China in 1784, began to baptize others that year.

As the faith began to spread, Catholics faced persecution and hardships from rulers who viewed the religion as a subversive influence. Korean rulers began to see Catholicism as a false religion that denied Confucian ethics and invited Western imperialism to the country, ucanews.com reported.

The persecution in the late 18th and 19th centuries saw thousands of Catholics murdered for refusing to renounce their faith. The largest persecution in 1866 produced some 8,000 martyrs.

Among the most famous martyrs was Andrew Kim Taegon, the first Korean-born Catholic priest and patron saint of clergy in Korea, who was beheaded in 1846 at the age of 25.

In 1984, during his visit to South Korea, Pope John Paul II canonized 103 martyrs, including St. Andrew Kim, and nine French missionaries who had been martyred in the 19th century.

The Korean church is celebrating the 200th birth anniversary of St. Andrew Kim this year.

Church officials say South Korea has about 5.6 million Catholics -- about 8% of the population -- spread in three archdioceses, 14 dioceses and a military ordinariate.