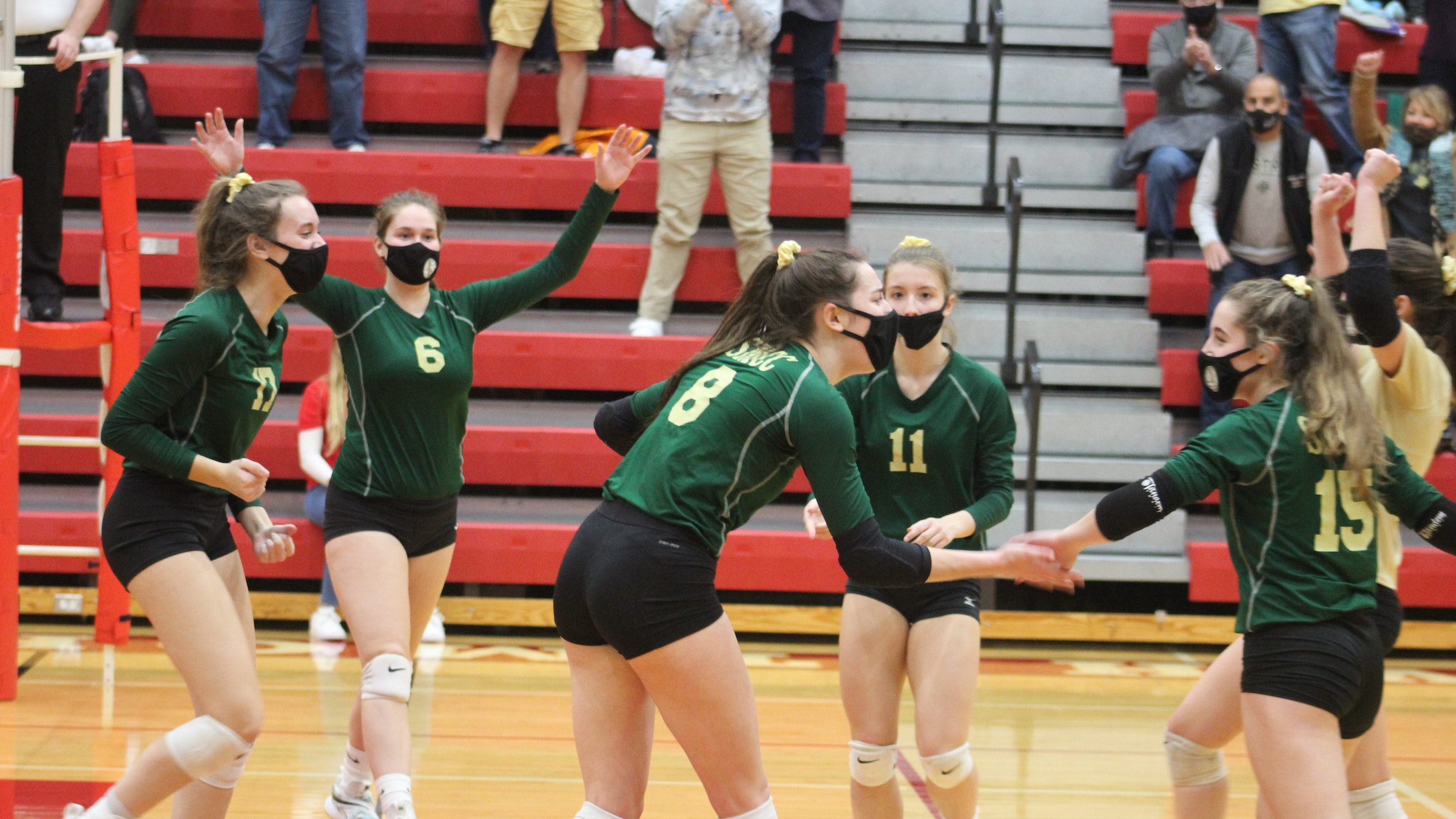 WHITMORE LAKE — Every season since 2014, either Monroe St. Mary Catholic Central or Bronson had won a state volleyball championship.

But when the two squads met Tuesday night in a Division 3 quarterfinal at Whitmore Lake High School, that didn’t seem to matter too much to the Kestrels.

“In the back of our minds, we knew that for the past six years it was either us or them that won the state championship, but we weren’t looking at it from the past point of view,” senior Mikayla Haut said. “We were in the present with our team and our game.”

“It definitely took us a few points to get back into rhythm, and that’s for not playing for so long,” said Haut, an all-state hitter. “After we found our groove and the chemistry came back, I think we played our game.”

“From 1 through 14 players, we’re just a little bit better,” O’Brien said. “We have six hitters where you don’t know who’s going to hit it, and I think it keeps them on their toes. Defensively they don’t know where to go. Mikayla Haut is a great hitter, but she’s not the only hitter that we have. I think Abby Costlow played really well tonight. When Kylie (Barron) got set, her hitting efficiency was high.”

The top-ranked Kestrels (37-2) move on to a state semifinal match against fifth-ranked Beaverton, 2 p.m. Thursday at Battle Creek’s Kellogg Arena.

“We’ve got to be mentally and physically prepared, and now we just have to raise that level up a little bit,” O’Brien said.

It was a long journey from Mya Minjares’ backyard — where Royal Oak Shrine held early-season workouts before players were cleared to practice indoors — to Fenton High School, where the season ended.

“I think it was a good season,” said Minjares, an honorable mention all-state libero who will play at Adrian College next year. “I’ll remember how crazy it was, how we kept stopping and starting and not knowing if we were going to be able to keep playing, but it was a good experience.”

While it was a successful year overall for the Lady Knights, they had hoped to make one more stop on their long journey — Kellogg Arena. Instead, Shrine fell to third-ranked Saginaw Valley Lutheran in three sets, 25-15, 25-16 and 25-23 in a Division 3 quarterfinal held at Fenton on Tuesday evening.

“I think this match was not just like every other match,” coach Annette DeMartino said. “These girls put their heart and soul into it.”

While the Lady Knights (15-5) put up a battle, Valley Lutheran seemed to consistently be one step ahead. The Chargers were following up a 40-win season and their first final four appearance in program history. Shrine had brief leads in each set, and the final game was the most exciting, with tie scores at 1, 7, 8, 10, 11, 18, 20, 21 and 22 points.

“They’ve got some big hitters in their front row, and we made some adjustments in the third set as well as we could,” DeMartino said. “I do think their experience helped them, but when we walked in the gym we had some good energy. We knew coming in that we were the underdog.”

Not only was it Shrine’s first appearance in the quarterfinals since 2007, it was the first match for the Lady Knights since they won the regional championship at Rochester Hills Lutheran Northwest on Nov. 13. There were only seven practices during that entire span.

“It’s been difficult to take two months off and start back up again,” DeMartino said. “We shake off the rust and step on the court, and all of a sudden they play states. But everyone was in the same boat. They looked a little rusty when they started up.”

Minjares had 18 digs, as did Kathryn Mulcahy. Ellie Plunkey had 34 assists, while Margaret Jones had 12.