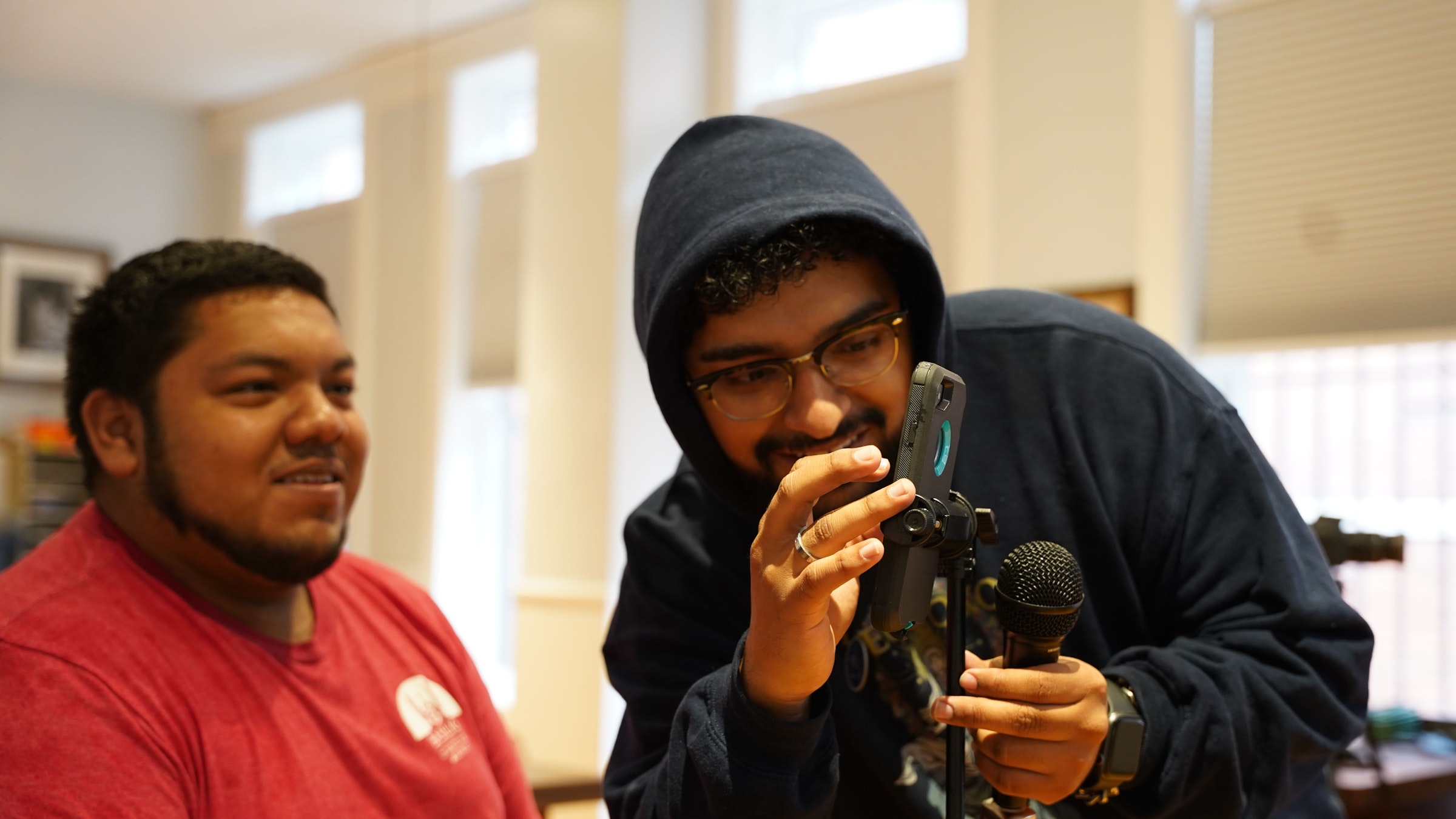 Daniel Magareno, left, and Ricardo Hernandez set up a recording for Facebook Live on Sept. 24 during a rained-out meeting of Cor Ignis ("Heart on Fire" in Latin), a group for Hispanic young adults focused on chastity and purity at the Basilica of Ste. Anne in southwest Detroit. (Photos by Daniel Meloy | Detroit Catholic)

DETROIT — Cor Ignis is looking to ignite the hearts of the Detroit young adult Hispanic community.

The Detroit chapter of the New York-based Corazon Puro (“Pure of Heart” in Latin) promotes chastity and virtuous relationships.

The national group was founded by Fr. Agustino Torres, CFR, a priest with the Franciscan Friars of the Renewal who began Corazon Puro in New York as a way to unpack the teachings of St. John Paul II’s Theology of the Body for the young Hispanic community.

The Detroit group, which operates out of the Basilica of Ste. Anne in southwest Detroit, is officially Cor Ignis (“Heart on Fire” in Latin) and is hoping eventually to evolve into Corazon Puro with official ties to the New York-based group, said Daniel Magareno, leader of the group and director youth and young adult ministry at the Basilica of Ste. Anne. 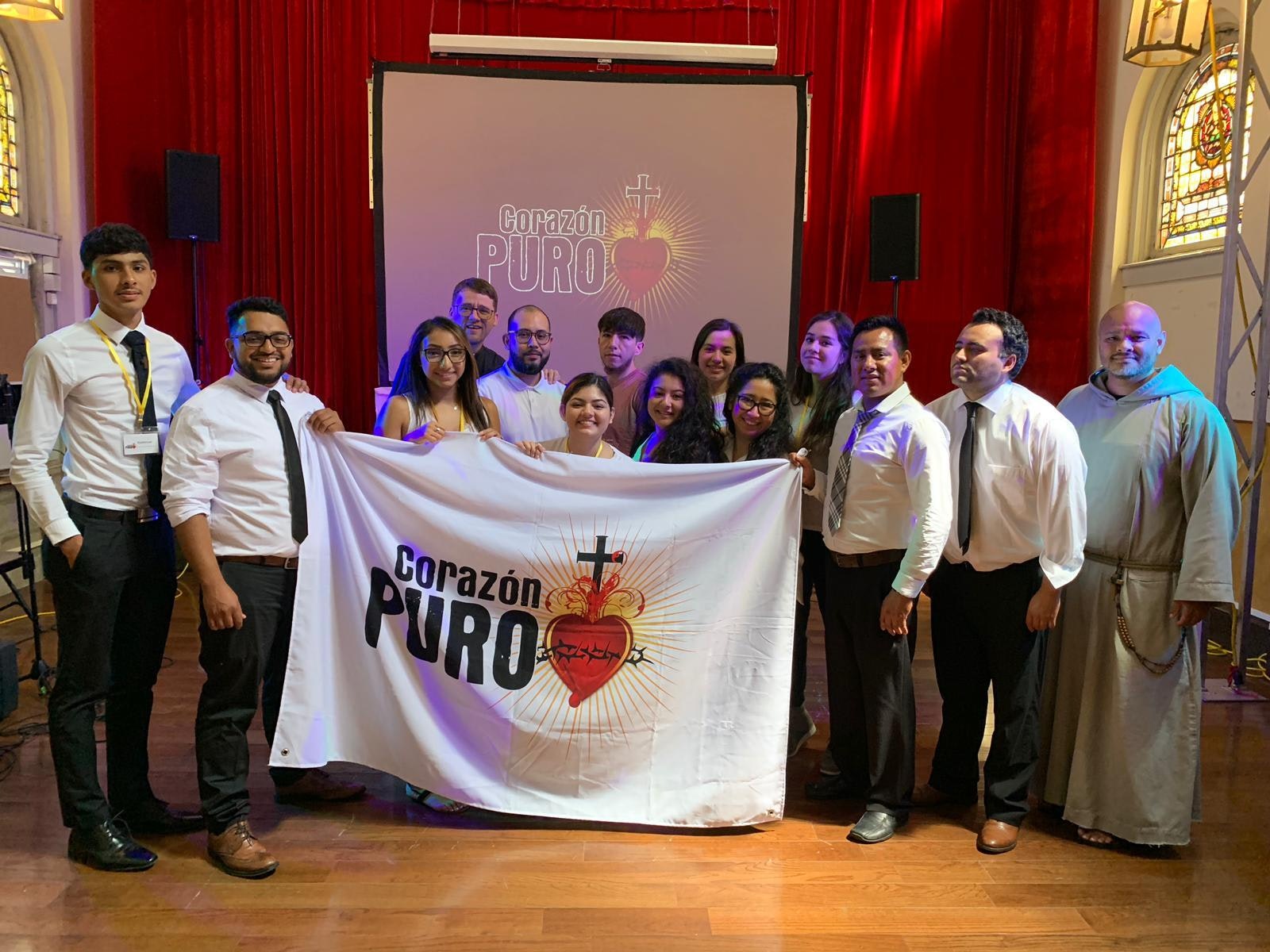 The Detroit chapter, which is known as "Cor Ignis," began three years ago, inspired by the New York-based "Corazon Puro" ("Pure of Heart" in Latin), which was begun by Fr. Agustino Torres, CFR, as a way to reach young Latinos with the message of St. John Paul II's Theology of the Body. (Courtesy of Cor Ignis)

“We’re based off a group that started 10 years ago out in New York with Fr. Agustino Torres,” Magareno told Detroit Catholic. “He started that group to get people to learn about ‘Theology of the Body.’”

“We really want to promote chastity,” said Ricardo Hernandez, director of media for Cor Ignis. “I know there are some groups that have Theology on Tap and other social groups, but this is specifically in the Latino community or Hispanic ministry. We (didn't) necessarily have a group that discusses topics such as sexuality or gender in our community.”

Cor Ignis has about 10 core members who attend its monthly conferences, along with a solid following on the group’s Facebook and Instagram feeds, a necessity when the group began in the wake of the COVID-19 pandemic. 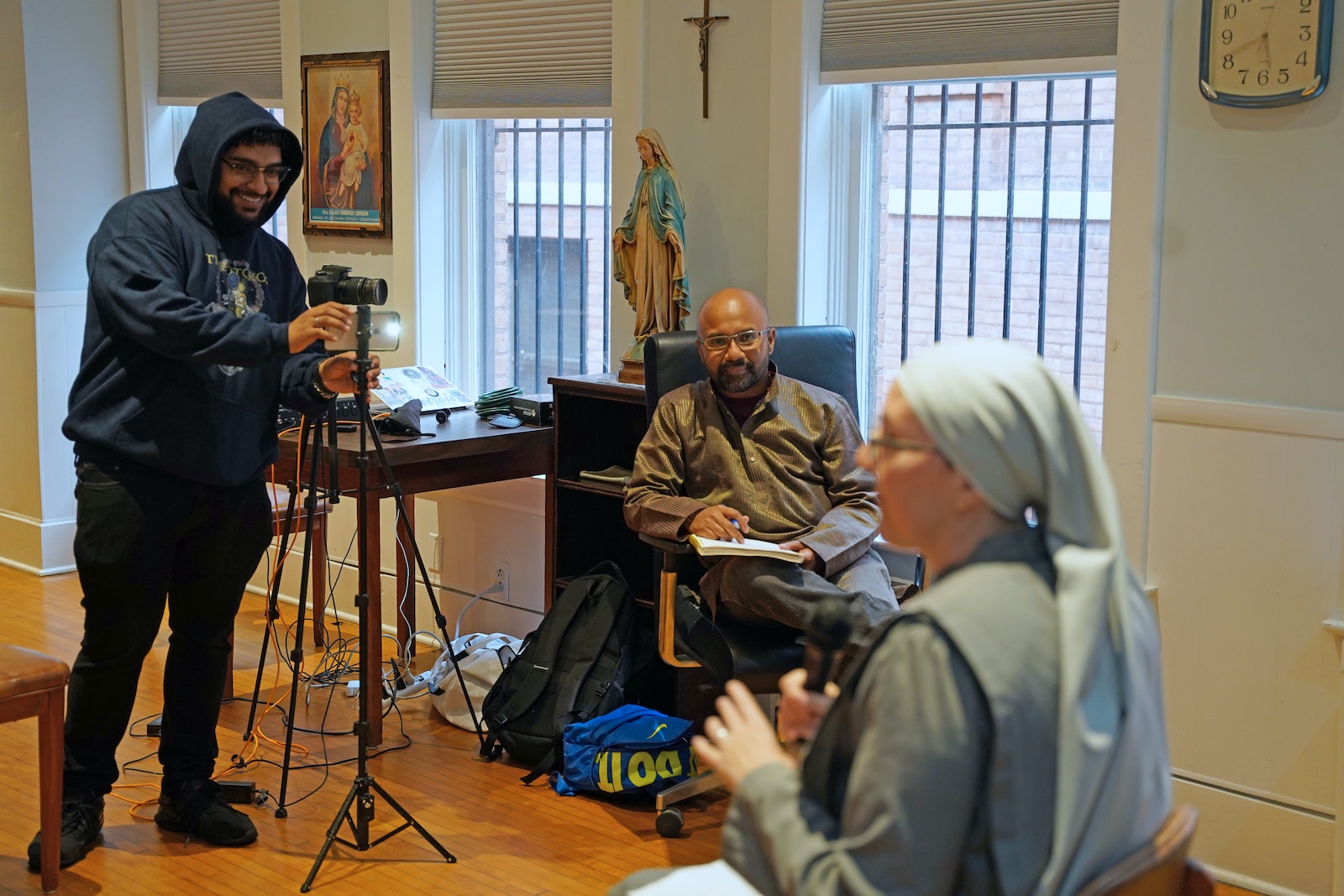 “This group is specifically for young adults who are not married, where they can learn about chastity and saving oneself for marriage,” Magareno said. “This is needed everywhere. The Theology of the Body has been out for many years since John Paul II released it (in 1984), but it’s not reaching people.”

Thunderstorms on the day of the talk stymied in-person attendance, but with Hernandez's help, Sr. Kateri broadcast her keynote to Cor Ignis’ social media pages via Facebook Live and Instagram, with Magareno asking questions posed by the live audience.

“We started doing Facebook Live to reach our audience here in southwest Detroit during the pandemic, but really it’s a wide group of people who have been watching our broadcasts across the archdiocese and really the country,” Hernandez said. “We have some people from New York and Corazon Puro who follow us here. More recently we started to have our live broadcasts in Instagram, since Instagram, in my opinion, is easier to access for young adults.” 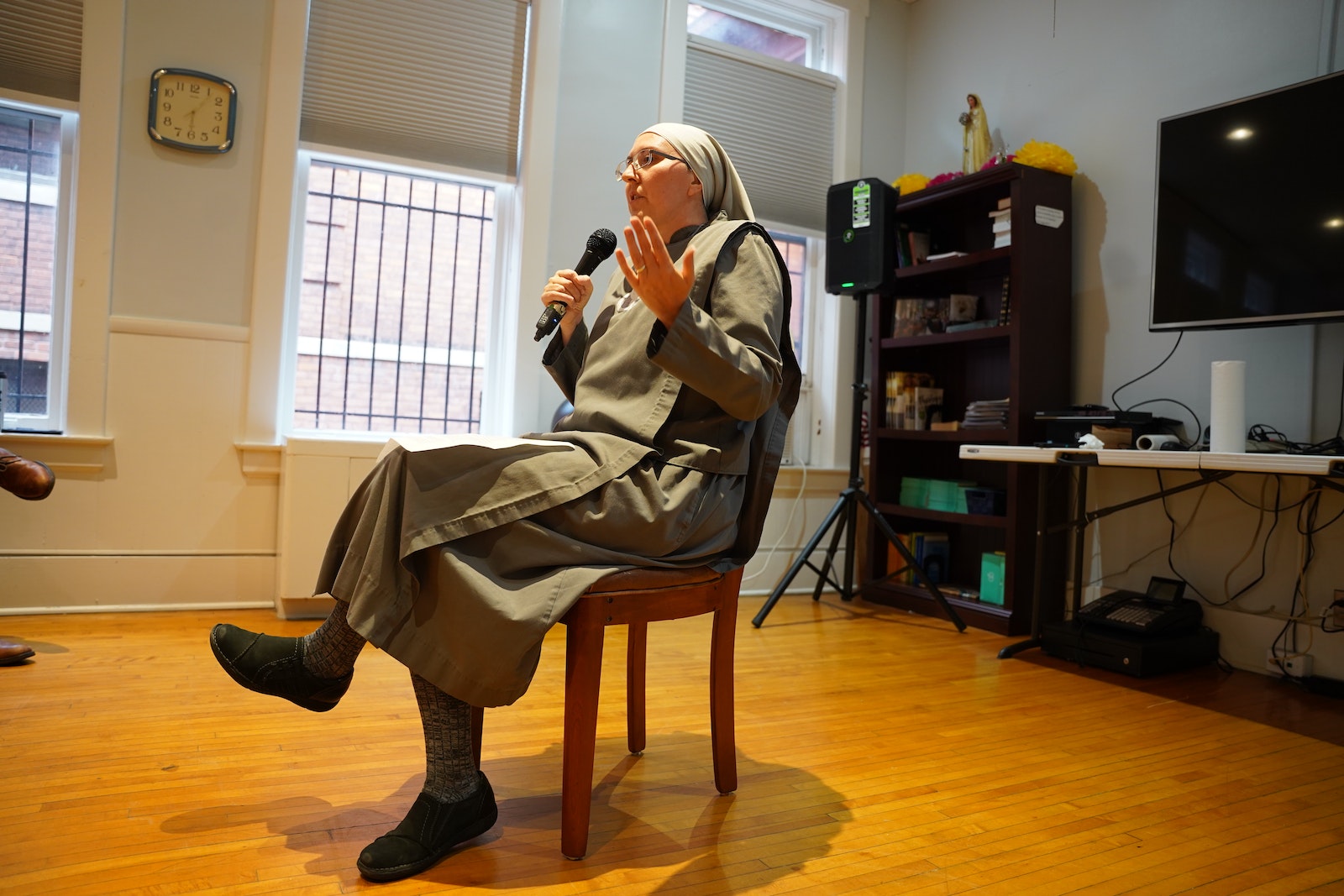 Sr. Kateri Burbee, SOLT, gives a talk about St. John Paul II's Theology of the Body on Facebook Live and Instagram on Sept. 28 during one of Cor Ignis' monthly meetups. Thunderstorms in the area precluded in-person attendance.

Magareno said the group fills a specific need in the young adult Latino community for those who want to delve deeper into the faith.

“For me, this group has helped me learn more about the sanctity of living a holy life,” Magareno said. “It’s why our group always tries to have adoration or Mass, to have that spirituality. It’s a good way to help you grow spiritually and learn what chastity is all about.”

The group's emphasis on purity and theology is meant to fill a void in catechesis, as well as to provide a community of like-minded young adults, Hernandez said. 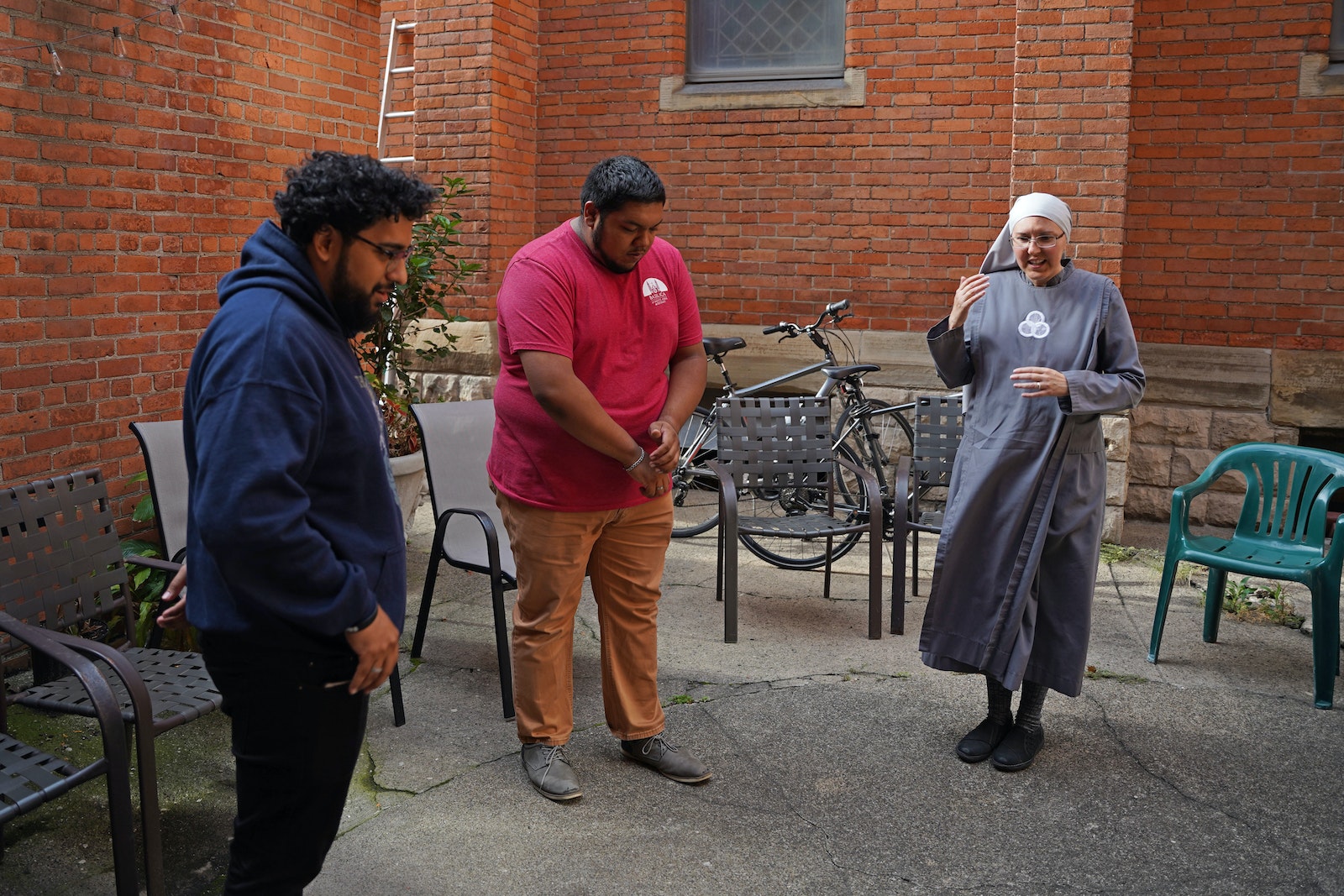 “We always emphasize saving sexual relationships until you are married, and once you are married, they don’t necessarily give you a ‘What’s next?’” Hernandez said. “Oftentimes, these discussions aren’t addressed, and our adults don’t have a good foundation on what it means to have love and responsibility. We’re seeing a lot of things in our culture that affect young adults, from the hook-up culture and gender ideation. So these meetings and these topics help young adults know they are not alone, that we have these wonderful gifts from God and a way to live responsibly with them.” 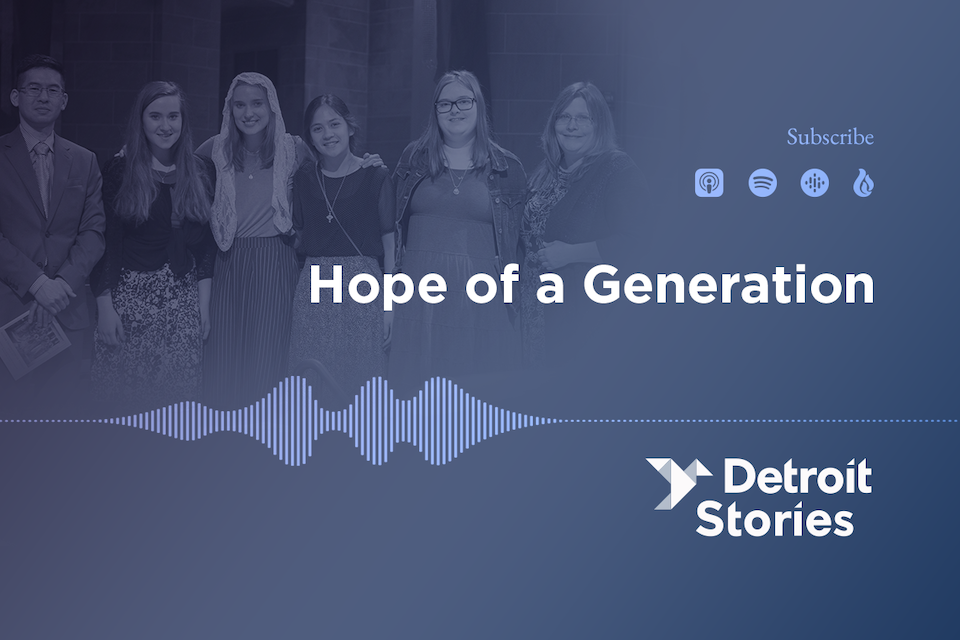 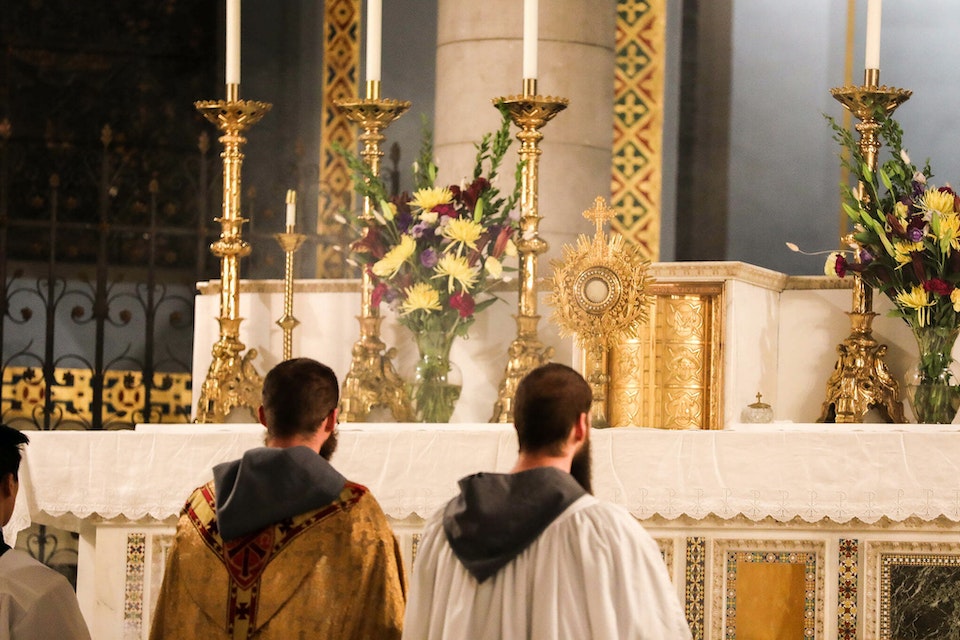