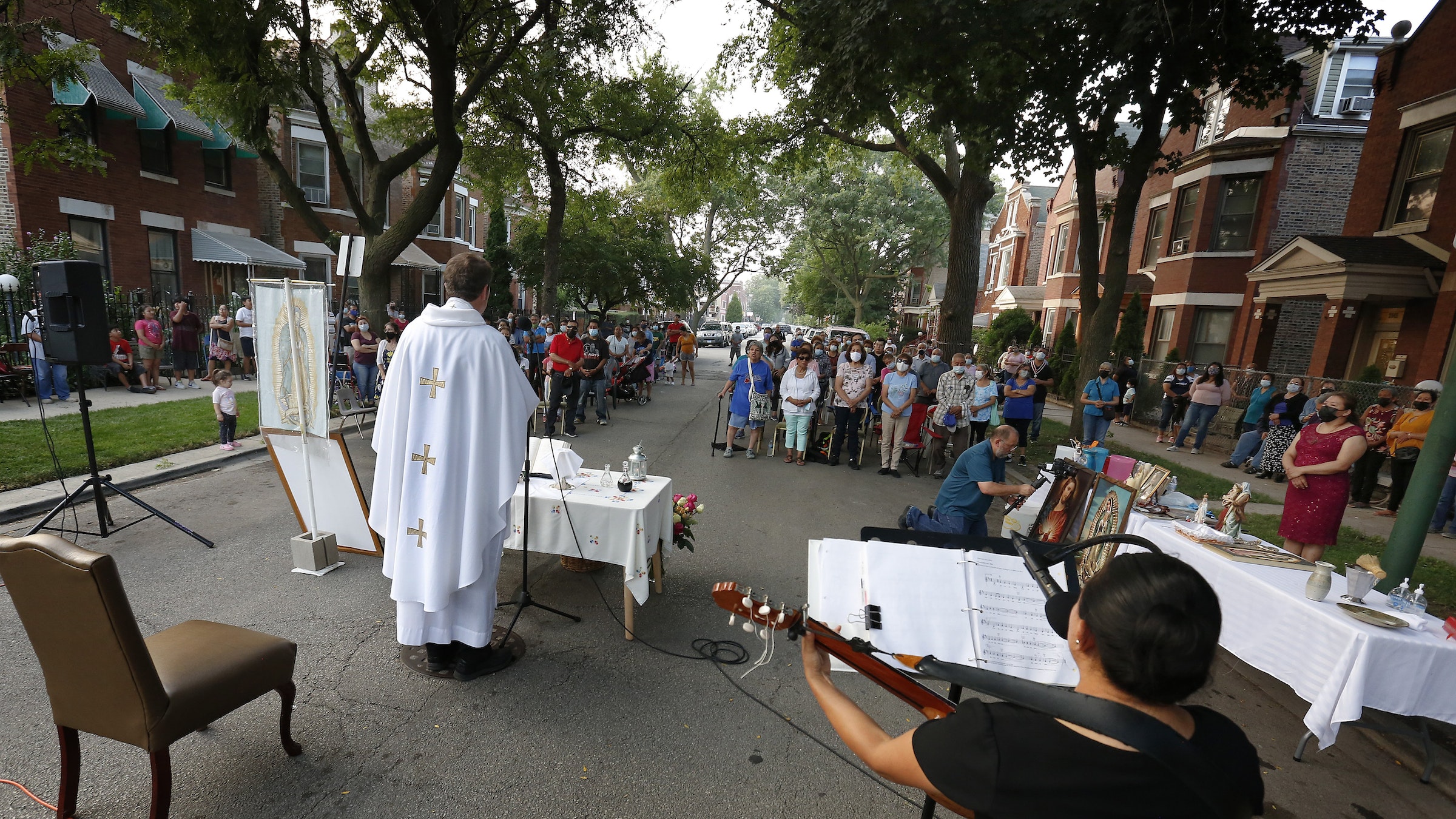 Father James Kastigar is the main celebrant of a street Mass in Chicago July 22, 2021. St. Agnes of Bohemia Catholic Church in Chicago held several street Masses in June and July in an effort to bring the Gospel message of peace and hope to city neighborhoods and pray for an end to the violence that has plagued the streets of Chicago in 2021. (CNS photo/Karen Callaway, Chicago Catholic)

CHICAGO (CNS) -- For the neighbors who came out for a recent street Mass in Chicago's Little Village neighborhood, blessings abounded.

The weather held, with no rain and a breeze to lift the heat. Cicadas sang and birds twittered in the trees, offering entertainment for babies and toddlers in their parents' arms as Father James Kastigar, associate pastor of St. Agnes of Bohemia Parish, celebrated Mass in Spanish July 22 to mark the feast of St. Mary Magdalene.

The Mass was one of several outdoor street Masses hosted by parishioners this year, resuming a tradition that had to be put on hold in 2020 because of the COVID-19 pandemic. The Masses have been celebrated for about 20 years.

"We continue to gather as a community and welcome the opportunity to pray for the end to violence and continued to push for peace," said Father Don Nevins, parish pastor. "This is also an opportunity to let people know we are open for business and are welcoming people back to Mass after the pandemic.”

The Masses are organized by parishioners who participate in Misión Guadalupana, said Carmen García, one of the organizers for the San Augustin sector that hosted the Mass. The group divides the parish into 10 sectors and hosts at least one Tuesday or Thursday evening Mass in each sector, planning for months ahead of the July celebrations.

"We want to offer the presence of our God and celebrate the Mass so people can experience it where they live," García said.

For each Mass, volunteers find a host family who will provide electricity for the sound system, and water and light refreshments after the liturgy.

Leslie Dominguez, 17, was part of the host family for the celebration.

"It's really important to have a Mass where you live," Dominguez told Chicago Catholic, the archdiocesan newspaper. "God transcends everywhere, but this is God at our home.”

Each family is a "domestic church," Father Kastigar said, and bringing the Mass to parishioners' neighborhoods emphasizes that.

"Each house is a little church, and that's where the faith should grow, in each house," he said.

Volunteers arrange to close the street, obtain the necessary permits from the city and spread word about the Mass in the neighborhood.

In the past, that has meant going out two by two, García said, just as Jesus' disciples did, and knocking on doors.

This year, because of the pandemic, organizers hung flyers in the neighborhood.

Those who attended this year were asked to wear face masks and bring their own chairs.

Participants can also bring religious articles or water to be blessed at the end of Mass, Father Kastigar said. He also blessed all the children present, and offered a special blessing for a girl celebrating her 15th birthday.

"Usually somebody brings a cat or a dog or something," Father Kastigar said after the Mass, noting that the only four-footed guest was a cat that wandered through the congregation on its own. "And that's fine, too.”

The Masses also offer an opportunity for people to pray for an end to violence, García said, noting that street violence can be a problem in Little Village.

"Once people are touched by the mercy of God, they can help stop the violence," she said.

Mass concluded with announcements -- "It's not a Catholic Mass without a collection and announcements," Father Kastigar joked -- including one encouraging parishioners to return to church as COVID-19 restrictions have eased.