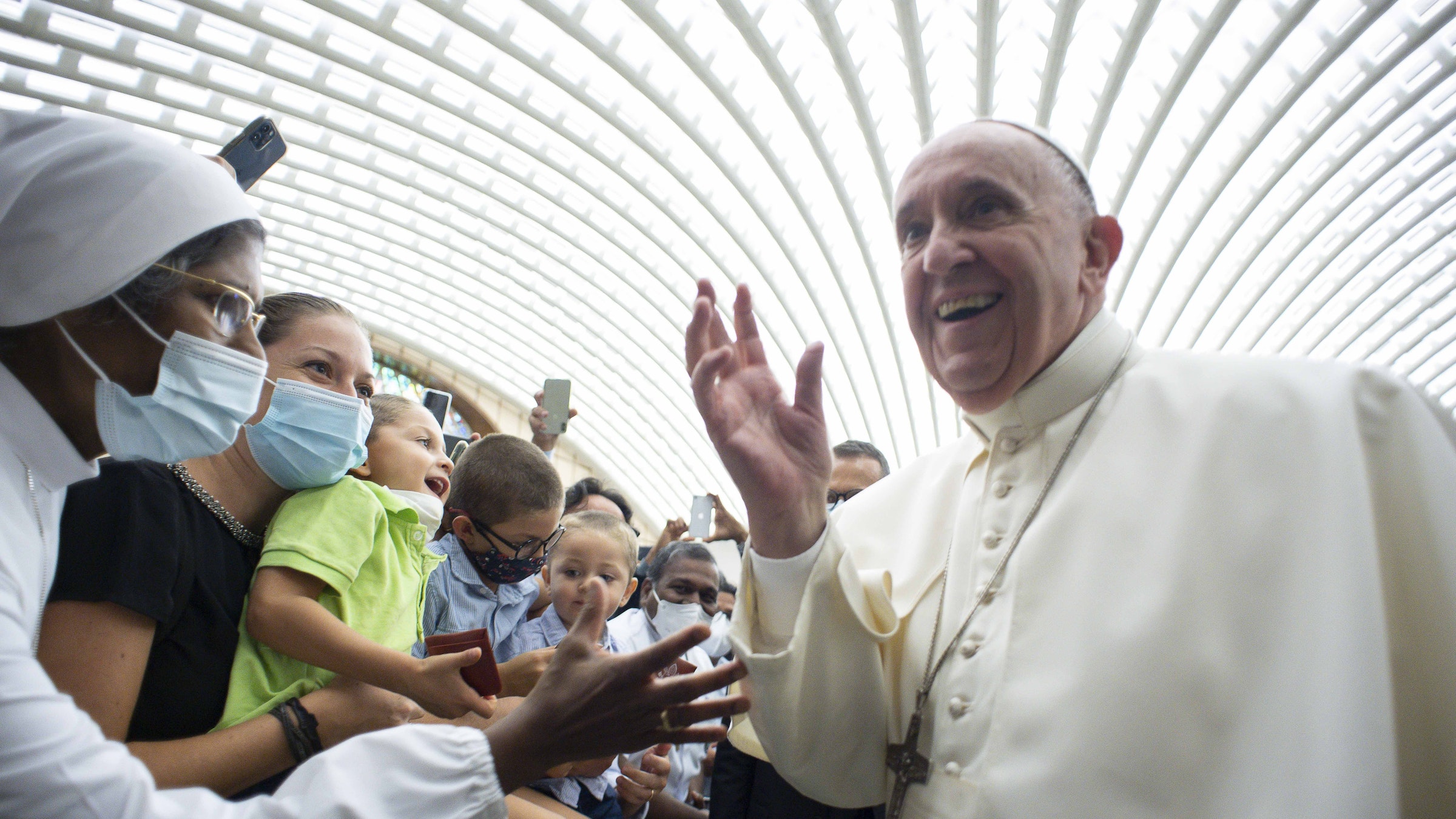 Pope Francis greets people during an audience with the faithful from the Diocese of Rome at the Vatican Sept. 18, 2021. (CNS photo/Vatican Media)

Laypeople deserve to be heard and Pope Francis is inviting the church to hear their voices through the synodal process now underway, Cardinal Joseph W. Tobin of Newark, New Jersey, told a webinar audience.

"Those of us who have been in the trenches realize that the input of the laity, who are the majority of the church, is crucial," the cardinal said Nov. 22 during the online program assembled by the Catholic Apostolate Center and the U.S. Conference of Catholic Bishops' Secretariat for Laity, Marriage, Family Life and Youth.

"Without that it's like trying to see the picture with one eye closed and maybe three-quarters of the other one (closed)," he said.

Three other panelists and a moderator joined Cardinal Tobin in the webinar in reviewing the role of laity in the synodal process that began in October. The process is the first stage in preparation for the world Synod of Bishops in October 2023 that will discuss synodality and the wide call for all voices to be part of discerning the church's future.

The key, they said, is to pray and discern what the Holy Spirit is saying at this point in history by listening to each other.

Xavière Missionary Sister Nathalie Becquart, undersecretary of the Synod of Bishops, described synodality as the way of "being the church all together."

Panelists stressed that the synodal process highlights the call of the baptized to carry out the mission of the church.

Dominican Father Wayne Cavalier, director of the Congar Institute for Ministry Development in San Antonio, said the baptismal call extends beyond full participation in the liturgy with the adoption of the vernacular language at Masses nearly six decades ago.

Pointing to the documents of the Second Vatican Council, Father Cavalier explained that laypeople are co-responsible to live out the church's mission of evangelization "in the body of Christ through the power of the Holy Spirit."

Synodality, he added, captures the sense of walking together toward the reign of God. "We walk together as a pilgrim church toward that end," he said.

Panelist Kerry Alys Robinson, who works with Leadership Roundtable, which seeks to impart the laity's expertise in key temporal aspects of church governance, said she sees baptism as "conferring both grace and responsibility."

Pope Francis, she said, prizes co-responsibility and diversity in the life of the church.

"In Leadership Roundtable we have an expression, 'Everyone has a piece of the wisdom.' We are all myopic on our own or in our narrowly defined groups, so we truly need this diversity of perspective and experience to be better informed, to be healthier, to be whole," Robinson told the online audience.

Cardinal Tobin followed up, saying that the synodal process is an opportunity for all people to emerge from the various forces that have "wounded" and "threatened to fragment" the church and human society in recent years.

"To try to involve a billion (Catholic) people across the world in this consultation is daunting, but the prospects of it I find exciting and hopeful," the cardinal said.

That process that led to participants' discernment of the Holy Spirit's call can guide the global church as it travels the synodal process, Sister Becquart said.

She briefly described how the First Vatican Council in 1869-1870 established the principle that the Holy Spirit speaks primarily through the pope and that Vatican II reintroduced earlier church teaching that the pope is not alone but works in concert with the bishops on church teaching.

Pope Francis is taking the teaching of Vatican II, as shown in recent synods in Rome, and demonstrating that the leader of the church "is supported by the people of God."

Describing how each person must be a protagonist in the synodal process, Sister Becquart urged people to learn about synodality by participating and listen to how God is calling them to act in the world today.

Father Cavalier suggested that the role of protagonist means that each person is to be an agent in the process rather than "a passive recipient waiting for things to happen."

"It's really important to find out what is happening and what is not happening in your parish, your ministry, in your deanery or in your diocese and make plans to take part," he explained.

The synodal process involves three phases. The first involves gatherings and discussions rooted in prayer in dioceses. It will continue through June. Each diocese is being asked to submit a summary of local discussions to the U.S. Conference of Catholic Bishops. Those summaries will be synthesized into a final written presentation for the Vatican.

Once the Vatican receives the synthesized reports from bishops' conferences around the world, the Secretariat of the Synod of Bishops will draft by the fall the "instrumentum laboris," or working document, to guide continental or regional ecclesial assemblies that will take place by March 2023.

Those assemblies will produce another set of documents that will help in the drafting of a second working document for the synod in October 2023. The synod is expected to produce a document on synodality throughout the entire church.

Panelists stressed that the church must be creative in finding ways to reach out to others who may not readily become involved in the process. There is no need to focus only on formal parish gatherings, they said, offering that outreach can include one-on-one conversations, small group discussions and visits to nursing facilities, prisons and shelters for homeless people.

"We are at the stage we understand more that everybody's voice matters," Sister Becquart said. "And the pastor's work should be done through the listening because the Holy Spirit is speaking through each one."