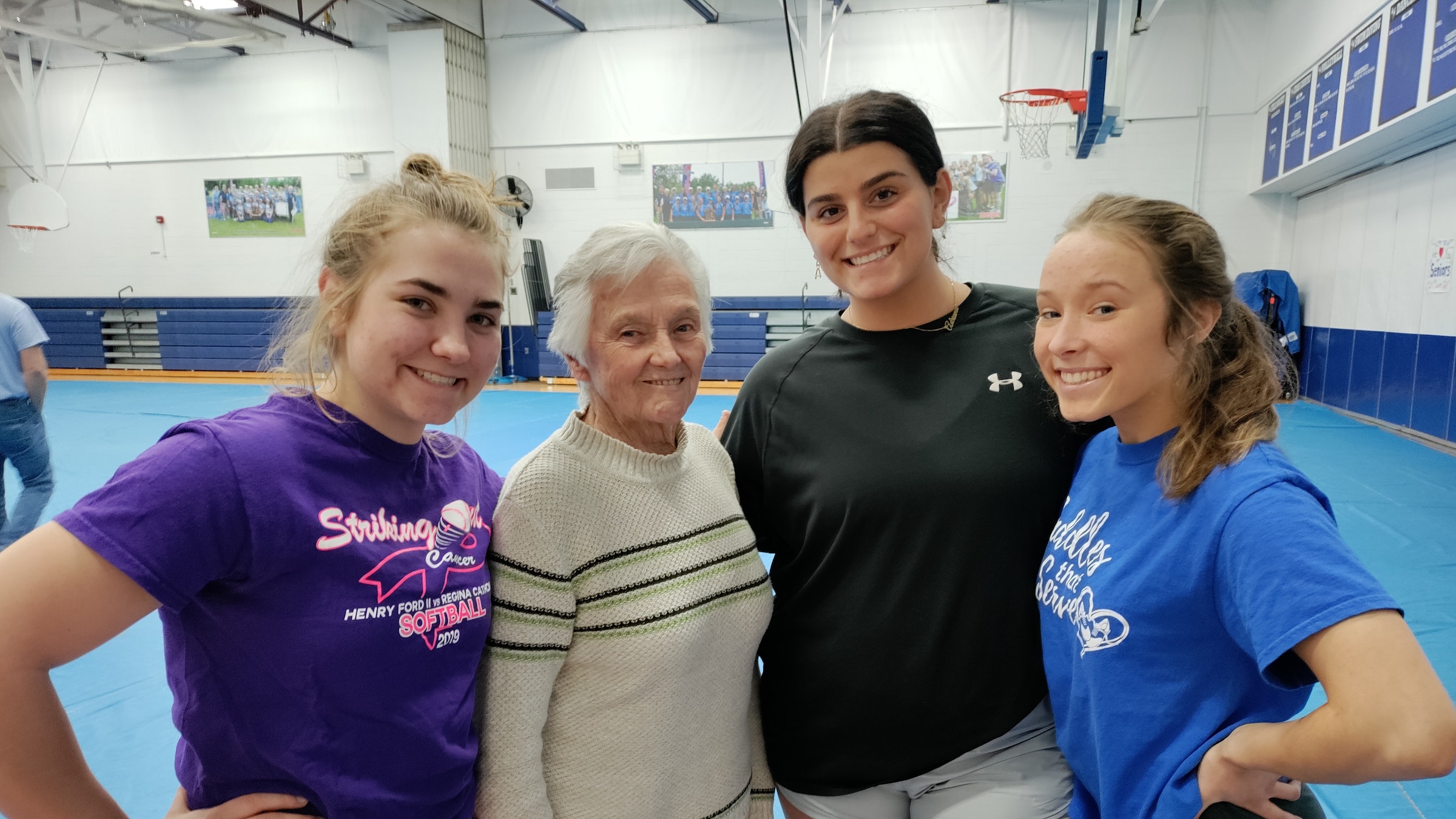 In her 60th, and final, season coaching Regina softball, Coach Diane Laffey huddles with three of her senior players during a recent indoor practice on a chilly afternoon: Shortstop Abby Hornberger (left) who is committed to Princeton, pitcher Adriana James to Indiana Tech, and outfielder Jenna Holt to Detroit Mercy. The Saddlelites open the season March 29 at Anchor Bay. Their home opener is a doubleheader against Farmington Hills Mercy at 4 p.m. on Friday, April 1. (Photo by Don Horkey | Special to Detroit Catholic)

WARREN — Tears were shed about a month ago at Regina High School.

She told the principal. She told her basketball team. “I even had a few tears,” Laffey says. It didn’t take long for the news to spread throughout the Regina community.

Put this moment in perspective:

Long a dream of the late Cardinal Edward Mooney, the Sisters of St. Joseph, Third Order of St. Francis, opened the doors to Regina in September 1956 in the vicinity of Eight Mile Road and Kelly Road in Harper Woods.

In the fall of 1970, Laffey joined the Regina staff as athletic director and basketball and softball coach.

On Oct. 14, 2007, Regina celebrated the grand opening of its new location on Masonic Boulevard, east of Schoenherr Road, in Warren. Cardinal Adam Maida called Regina “a very important part of the archdiocese.”

Do the math: Regina is in its 66th year, and Laffey in her 52nd year on the staff. To paraphrase Cardinal Maida’s remark, she is a “very important part” of the school’s mission of educating girls’ minds, bodies, and souls for life’s challenges.

Before Laffey arrived at Regina, she was basketball and softball coach for eight years at East Catholic/St. Anthony.

“(Basketball coach) Dave Soules and (track coach) Lou Miramonte and I arrived at the same time at East Catholic/St. Anthony,” she says. “We had a lot of fun between the three of us. East Catholic’s numbers were going down. There was an opportunity to go to a larger school, an all-girls school. Regina had a thousand students then.”

Laffey, a spry 83, is halfway through her 60th year coaching.

Over the winter, the Saddlelites basketball team won the school’s 24th district title in the Michigan High School Athletic Association playoffs. She finished with 668 career victories, seventh overall in the state and second among women’s coaches behind Bloomfield Hills Marian’s Mary Cicerone, who retired at season’s end with a record-setting 707 wins.

It's softball where Laffey gained legendary status. She opens the season with 1,231 wins, the most of any coach in the state, which includes seven state championships — in seven finals! — and 15 Catholic League titles.

Her perfect 7-for-7 is exceeded only by another CHSL legend, Mike Boyd, who managed Waterford Our Lady of the Lakes to 8-of-8 between 1984 and 2004.

The Saddlelites were the talk of the high school softball world when they won four state titles in a row in between 2004 and 2007 with a combined record of 153-12.

At the center of all the attention was a left-handed windmilling phenom named Nicole “Nikki” Nemitz. “She’s probably the best pitcher we ever had at Regina. She was really one of a kind,” Laffey says. In three years, Nemitz compiled a 71-2 record with a 0.25 earned run average.

In the 2004 game, sophomore Nemitz threw a no-hitter against East Kentwood. The Saddlelites won 1-0 on a walk-off single by designated hitter Emily Blair, driving in Andrea Adams.

In 2006, Nemitz used her arm (2 hits, 11 strikeouts) and bat for an 8-0 shutout of White Lake Lakeland. She doubled twice and drove in two runs. Third baseman Nicole Melendez smacked a bases-loaded double for three runs.

In the three championship finals, Nemitz was the dominant force: three complete games, no runs and four hits. She went to the University of Michigan, where she had a four-year 92-21 record and won All American and numerous other accolades.

Laffey remembers how members of the 2007 team came to her before the start of the season. “We want to win again without Nemitz (who had graduated),” Laffey recalled. “We are bound and determined to do it.”

And they did it, a thrilling 2-1 decision over White Lake Lakeland. The Saddlelites scored their runs in the first inning on a two-run double by Hannah Sabol, scoring Paige Shields and Tara LaMilza, both of whom had walked.

Regina opens the 2022 campaign on Tuesday, March 29, at New Baltimore Anchor Bay. Their home opener is three days later on Friday, April 1, a doubleheader against Farmington Hills Mercy at 4 p.m.

Nemitz is one of 14 Regina athletes who have been inducted into the Catholic League Hall of Fame. Among them are softball infielder Linda Berndt (1983), member of the Western Michigan University Hall of Fame; sisters catcher Cory Delamielleure (2014) and pitcher Chelsea Delamielleure (2016), both All Mid-American Conference stars at Central Michigan; Sarah Judd (2002), an Oakland University Hall of Honor inductee considered one of the top female players in school history; and Miss Basketball nominee Paula Sanders (1997), who is in the Michigan State record books for rebounds and steals.

Laffey was raised in the Cadieux-Warren area on Detroit’s east side. Her father, Jack, was a factory worker; her mother, Mabel, a nurse. Diane caught the coaching bug watching her father, more popularly recognized by his nickname “Red,” coach football and basketball at St. Charles and Nativity high schools. He was inducted into the CHSL Hall of Fame, too.

Laffey graduated from Nativity in 1957. She received a bachelor’s degree from the University of Detroit and, in 1972, a master’s in counseling from Wayne State. She later was a standout player as a pitcher-infielder in a Michigan-Ohio Women’s Fastpitch League.

“The kids,” she says. “They keep me going. I love the environment. I love the people who work here. That’s why I have stayed so long.”

She never married. “Coaching is my vocation," she says. "Working with kids is what I love to do. I listen to them a lot. I hear them talking about what they care about, what is worrying them. It helps me relate to them.”

Regina. An “important part” of her life.