To serve, not be served: Curia called to help bishops, bishops' conferences 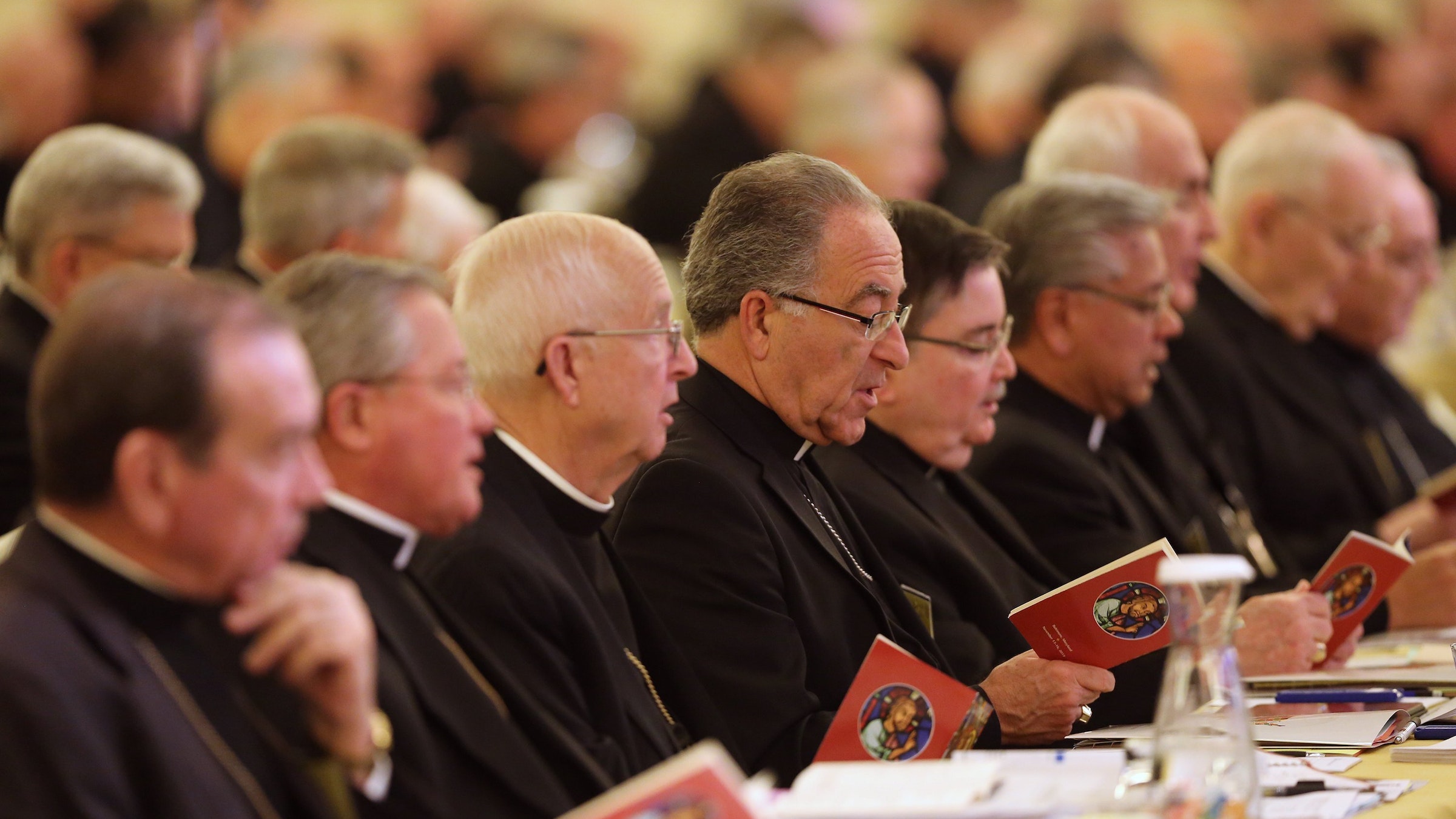 Bishops pray during the 2017 fall general assembly of the U.S. Conference of Catholic Bishops in Baltimore. Pope Francis' reform of the Roman Curia emphasizes work in the Vatican as a service not only to the pope, but also to dioceses and eparchies and bishops and bishops' conferences around the world. (CNS photo/Bob Roller)

VATICAN CITY (CNS) -- Pope Francis' reform of the Roman Curia emphasizes work in the Vatican as a service not only to the pope, but also to dioceses and eparchies and bishops and bishops' conferences around the world.

"The Roman Curia is not set between the pope and the bishops, but is at the service of both," the pope wrote in "Praedicate Evangelium" (Preach the Gospel), his apostolic constitution reforming the Curia.

The work of the Curia, he said, is "organically related to the College of Bishops and individual bishops, as well as to episcopal conferences and their regional and continental groupings, and the hierarchical structures of the Eastern churches. All these are of great pastoral benefit as expressions of the affective and effective communion existing among the bishops."

The practical impact of the pope's words became clear in early September when he announced that he had given the Latin American bishops' council greater responsibility for a papal fund previously controlled by the Curia and when the Dicastery for Promoting Integral Human Development announced a radical restructuring of its office.

The national and regional conferences of bishops blossomed after the Second Vatican Council, but their stature and influence -- at least in the eyes of top Vatican officials -- began shrinking in the late 1990s, when St. John Paul II and his closest aides tried to rein in their perceived power over the authority and ministry of a local bishop for his diocese.

In 1998, St. John Paul issued an apostolic letter, "Apostolos Suos" on the theological and juridical nature of bishops' conferences. Telling conferences they could issue statements on doctrinal and moral issues only if approved unanimously by conference members, the letter was seen by many observers as a caution against conferences growing too large and appearing to usurp the authority of individual bishops.

But from the beginning of his pontificate, Pope Francis has given a higher profile to bishops' conferences and their teaching authority.

Papal encyclicals and apostolic exhortations repeatedly cite passages from the Bible, from the teaching of previous popes and from ecumenical councils like Vatican II. Pope Benedict XVI's major documents also included early church theologians, ancient philosophers and contemporary thinkers, but not a statement of a national bishops' conference.

But Pope Francis, in his 2013 apostolic exhortation, "The Joy of the Gospel," cited the statements of six bishops' conferences: the United States, France, Brazil, the Philippines, Congo and India. He also drew heavily on the work of the Latin American bishops' council, known as CELAM, particularly its Aparecida Document, which -- as archbishop of Buenos Aires -- he was in charge of drafting.

The citations were a concrete sign of the collaboration he said is essential to his ministry as pope.

The Second Vatican Council affirmed that "episcopal conferences are in a position 'to contribute in many and fruitful ways to the concrete realization of the collegial spirit,'" Pope Francis wrote in that 2013 document. "Yet this desire has not been fully realized, since a juridical status of episcopal conferences which would see them as subjects of specific attributions, including genuine doctrinal authority, has not yet been sufficiently elaborated."

His 2015 document, "Laudato Si', on Care for Our Common Home," gave papal status to the teaching of more than a dozen bishops' conferences on the ethical and moral importance of protecting the environment.

But also, in the name of "healthy decentralization," he has made changes to the Code of Canon Law and to standard Vatican procedures to grant greater authority to individual bishops, bishops' conferences and synods of bishops of the Eastern Catholic churches in approving liturgical translations, setting up interdiocesan seminaries, drafting programs for the formation of priests and publishing national catechisms.

Pope Francis' document reforming the Curia said that with the church embracing "a multitude of peoples, languages and cultures," it has "an immense store of successful experiences regarding evangelization." One role of the Curia, he said, is to gather the wisdom, experiences and best practices of individual dioceses, bishops' conferences or Eastern synods of bishops and share them with others.

Announcing its new structure Sept. 14, the Dicastery for Promoting Integral Human Development said, "Our mandate is to help and support the Holy Father and the bishops throughout the world; here we mean regional and national bishops' conferences and the hierarchical structures of the Eastern churches, individual bishops and patriarchs, offices dealing with issues of integral human development issues."

Adapting the "see, judge, act" approach common to the application of Catholic social teaching, the dicastery said it now is organized in three sections: "listening and dialogue," which will promote two-way contact with bishops and Catholic groups engaged in justice and peace work; "research and reflection," which will study the issues and concerns raised by the bishops, bishops' conferences and groups; and "communication and restitution," which will share the results of the research with them and beyond.

The dicastery, led by Cardinal Michael Czerny, said its agenda would be shaped "by the challenges which the local churches bring to our attention," challenges that can and will change over time.

In another small shift, the Vatican announced Sept. 16 that Pope Francis had "suppressed" the Populorum Progressio Foundation for Latin America and the Caribbean, which had its administrative headquarters at the dicastery and its operational base in Bogota, Colombia. Founded by St. John Paul II in 1992 to assist the region's small farmers, Indigenous and African American communities, the foundation will be succeeded by the Populorum Progressio Fund, and CELAM, the Latin American bishops' council, will study the grant applications and monitor the projects.

"It is necessary to promote a stronger bond with the local churches," who know better the members of those communities and their needs, the pope said.