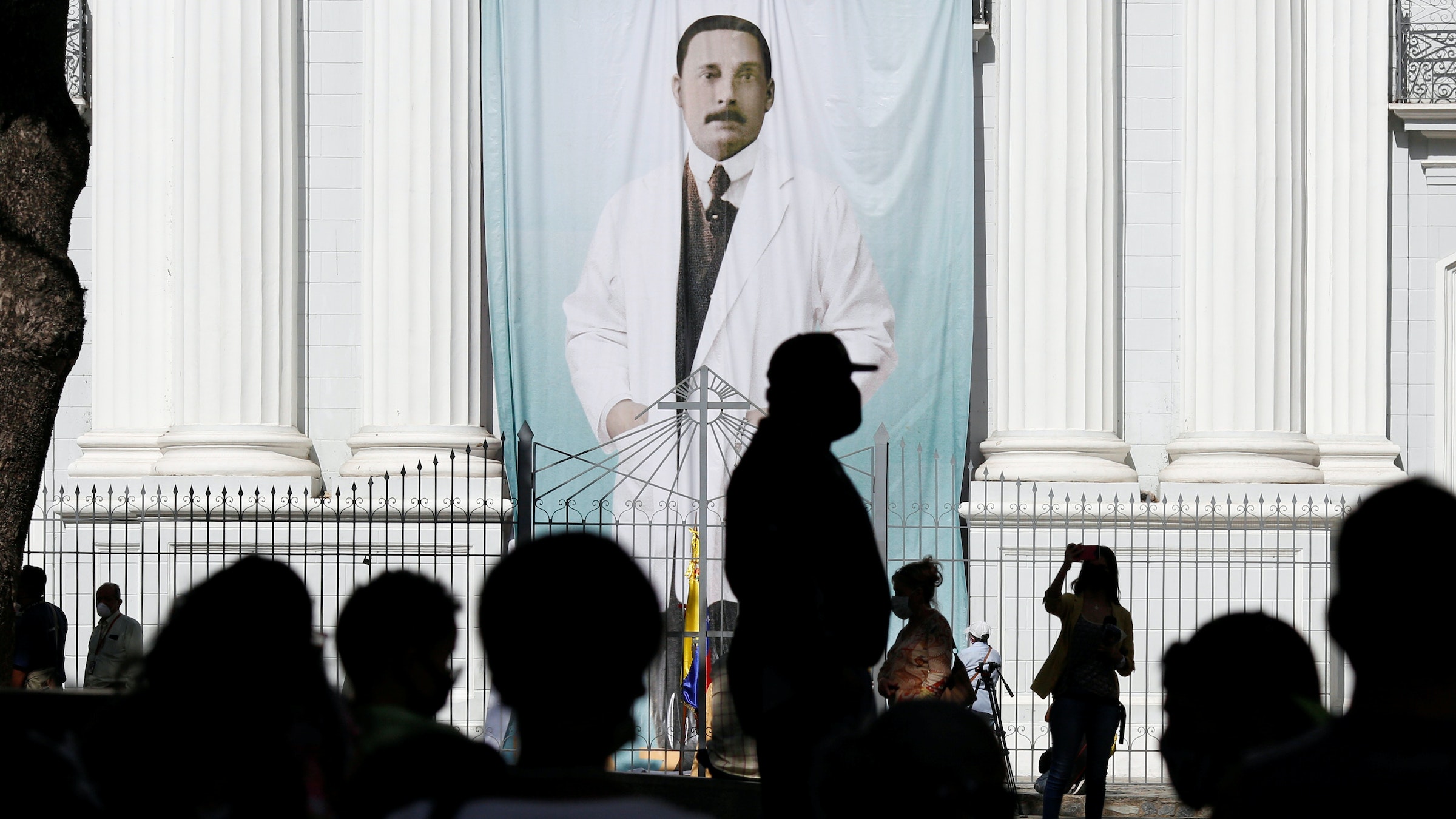 People stand near the church in Caracas, Venezuela, where the remains of Jose Gregorio Hernandez Cisneros rest. On June 19, 2020, the Vatican announced Pope Francis had advanced the sainthood causes of the Venezuelan doctor, born in 1864, and four others. (CNS photo/Manaure Quintero, Reuters)

BOGOTA, Colombia (CNS) -- Dr. Jose Gregorio Hernandez was known for treating hundreds of poor patients for free, and he spent the last years of his life helping Venezuelans fight illness during the 1918 Spanish flu pandemic.

The Venezuelan doctor -- who has been approved for beatification, a step toward sainthood -- also tried to become a priest on two occasions.

"He is a figure that unites all Venezuelans, regardless of their race, their religion or their political affiliation," said Fr. Gerardino Barachini of the La Candelaria church in Caracas. "I'm sure that this will bring a spiritual rebirth to our country."

Hernandez was born in a remote town in the Andes mountains, but made his way to the country's capital city to study medicine at a time when hospitals were scarce and doctors got around on horse carts.

Shortly after graduating from medical school in 1888, Hernandez received a scholarship to study in Paris, where he specialized in bacteriology and pathological anatomy. Upon returning to Venezuela, he became a university teacher and founded the country's first bacteriology lab. But he also visited hundreds of patients in their homes, working as a general practitioner.

Medical students in Venezuela now study his life and times.

"He was an excellent scientist," said Dr. Leopoldo Briceno, president of Venezuela's Academy of Medicine. "But he was also a humanist. He would visit patients at their home and, if they didn't have money, he wouldn't charge them. And he would buy whatever medicine they required."

Hernandez became well known for his charitable services, especially because in the early 20th century public health care was limited in Venezuela. Hundreds of people have credited him for saving them from near-death situations.

When a dictator closed the nation's main public university in 1908, Hernandez founded a private university with several colleagues, defying the political establishment.

Hernandez was also deeply religious. During a trip to Italy in 1909, he entered a seminary but was sent back home after a couple of months because of health problems. Another attempt to become a priest failed in 1913, also for health reasons.

Hernandez died in Caracas in 1919; he was hit by a car after leaving a patient's house. Following his death, thousands of Venezuelans began to pray to him for health.

Hernandez statuettes that usually depict him in a black suit and a hat became a household item. A cottage industry of Hernandez healing centers has emerged in Venezuela and neighboring countries like Colombia, where traditional healers try to invoke his spirit to treat their patients.

While the church does not approve of this practice, it shows how highly revered the doctor has become.

"There are Jews, Protestants, evangelicals, and even agnostics who pray to him for health," said Fr. Barachini.

Hernandez had become so popular that in 1975, the Archdiocese of Caracas removed his remains from a cemetery where his followers gathered and placed them in a church in the center of the city. That way people had a safer place to pray, and his bones were safe from tomb raiders.

His miracles were never properly documented, but in 2019, the Vatican's Congregation for Saints' Causes began to closely study one of them.

It happened in 2017, when a young girl was shot in the head during a robbery. Doctors said she lost brain tissue and was not expected to ever walk or speak properly again. But the girl recovered within a few weeks of a life-saving operation. During that time, her mother had prayed to Hernandez to intercede for her daughter.