What makes Brendan Haisenleder run? ‘You don’t want to give up’ 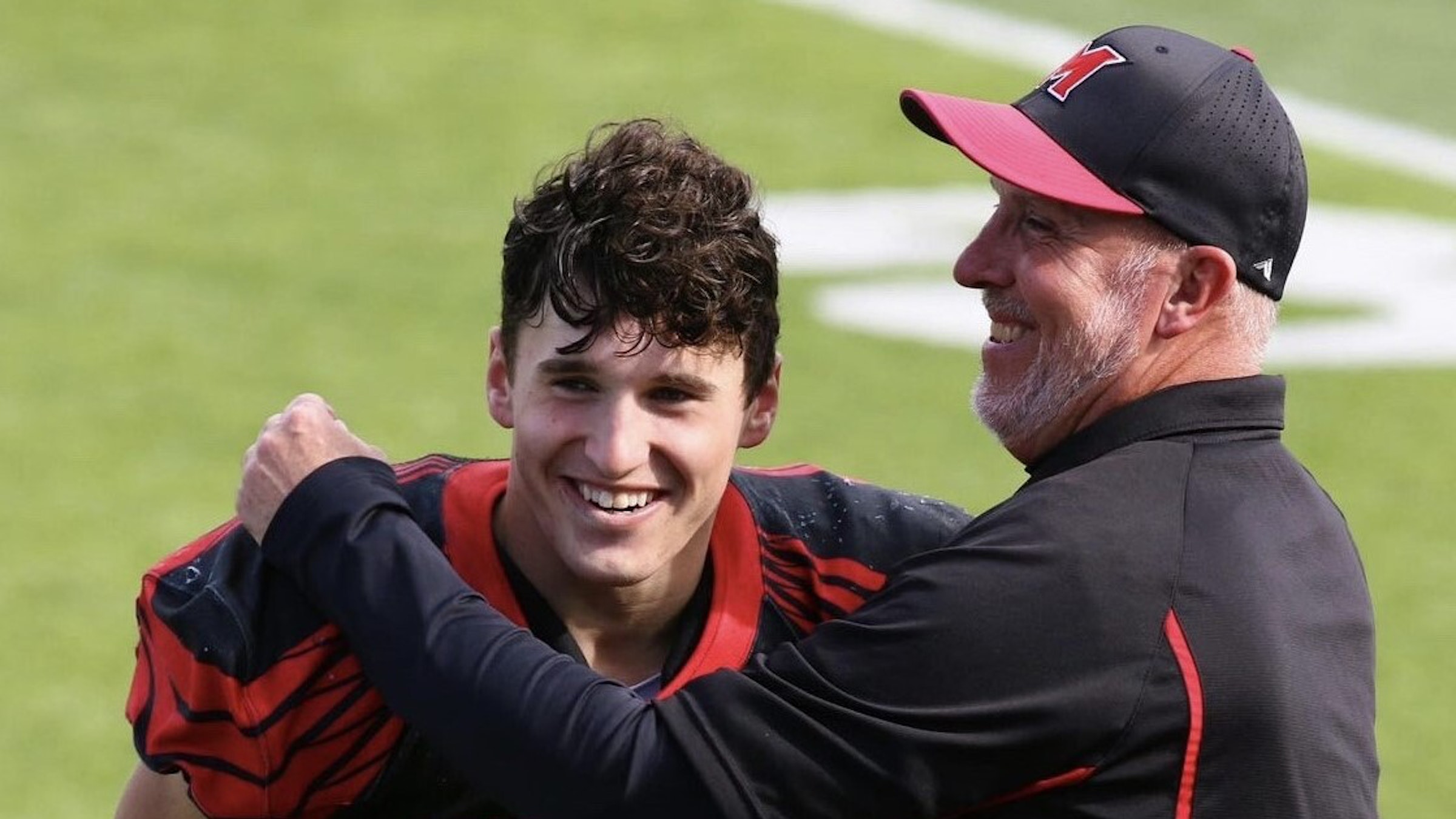 Cardinal Mooney running back Brendan Haisenleder smiles alongside his father and coach, Mike Haisenleder. Mike coached his son Brendan in football, basketball and baseball. “His yapping at me made me a better player,” Brendan said. “That’s the discipline he gave me. Always try to take things seriously. Do my job.” (Photo provided by Brendan Haisenleder)

Brendan Haisenleder is 17 years old. He hasn’t stopped running with a football since he was six playing in a flag football league. A year later, he moved up to tackle football. He can pull up a video on his phone of him shaking off tacklers en route to the end zone.

“I don’t know how my dad convinced my mom to let me play tackle football when I was 7 years old,” Brendan said. “I know it’s scary when a bunch of kids are running into each other. But she knows I’m not the kind of kid who wants to sit out.”

About three weeks ago, he scored his 49th — and last — high school varsity touchdown wearing the red and white colors of Cardinal Mooney. It was his third of the game, which the Cardinals lost 42-21 to Clarkston Everest Collegiate for the Michigan High School Athletic Association Division 8 district championship.

What a contrast to the first touchdown he scored, a game-winning one, but with a muted postgame celebration.

In between those bookend events, Brendan produced a head-shaking senior season that ranks him at or near the top of the best high school running backs in Michigan. In 11 games, he carried the ball 253 times (a workhorse 23 a game) for 2,302 yards (a dazzling 9.1 average-per-carry, 209 per game) and scored 30 touchdowns (28 running, 2 pass receptions).

A safety on defense, he made 148 tackles and five interceptions. He set seven school records, was named All-Catholic, and most certainly should be recognized All State when those honors are announced.

Here’s the rest of the story:

From St. Mary Catholic School in Mount Clemens, Brendan enrolled at Warren De La Salle. He was a starter and captain of the freshmen team. He also made the basketball team. About that time, the “football stuff was going on,” Brendan said, referring to the locker room scandal that rocked the Pilots community.

“I didn’t know if there was going to be a season the next year with a lot of stuff going on. I didn’t want to be a part of it,” he said. He transferred for his sophomore year to Cardinal Mooney.

In the second game of the 2020 COVID-shortened season, the Cardinals faced Waterford Our Lady of the Lakes.

“It was a zero-zero game the whole time,” Brendan said. “It was the end of third quarter or beginning of the fourth. I scored on a touchdown run, but in the process I broke my fibula and my tibia. As I was diving into the end zone, my cleat got stuck in the ground and a kid landed on my left leg. We ended up winning the game, 7-2. I was out the rest of the season.

“I healed up about the time we started conditioning for basketball. I took it light and wore a brace until about the middle of the season.”

Brendan’s junior year was uneventful injury-wise. The Cardinals finished 7-3 for the first time above .500 in eight consecutive autumns.

His father, Mike, joined the Mooney staff as an assistant. “He’s coached me in football, basketball and baseball, but he takes football more seriously,” Brendan said. 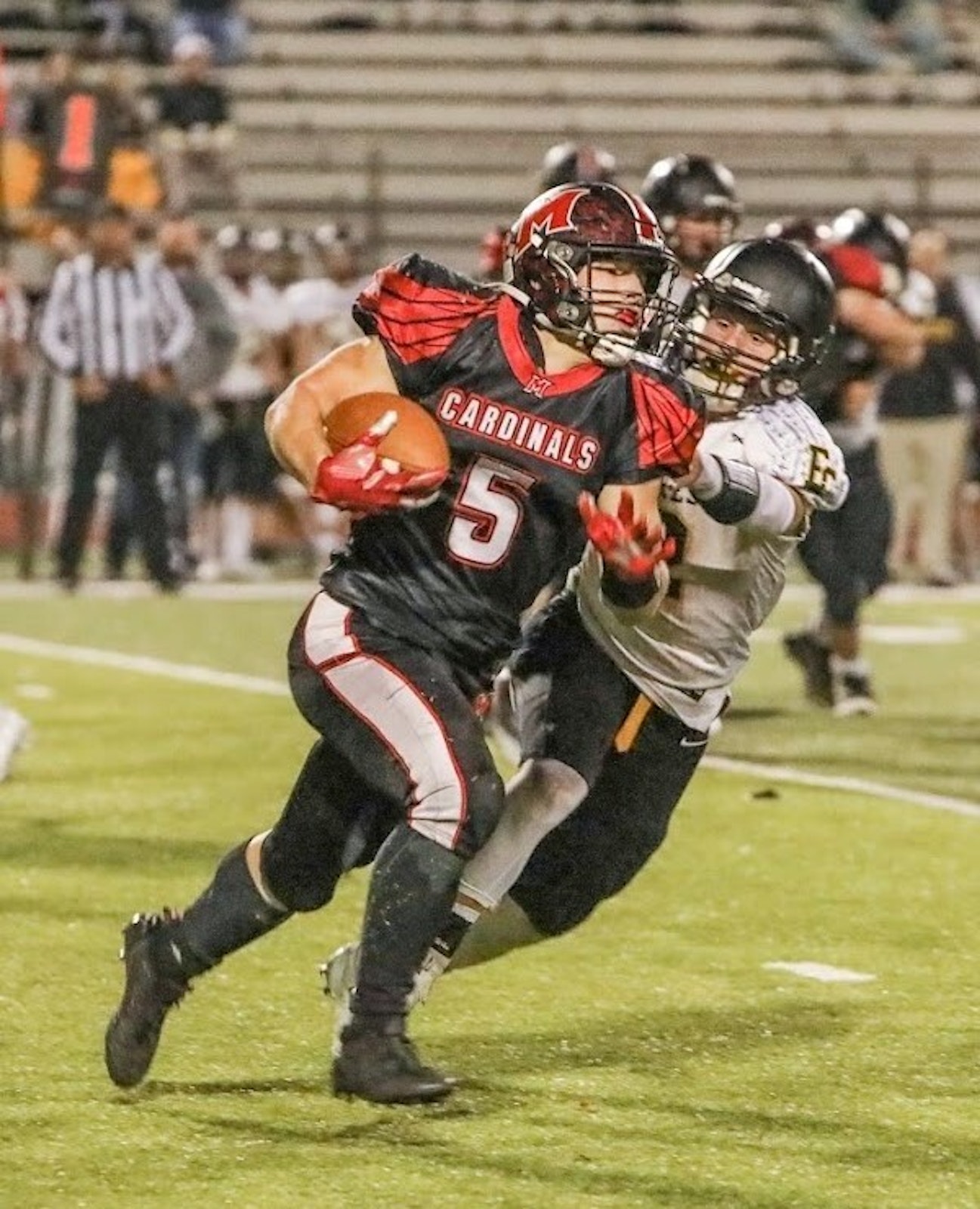 Cardinal Mooney’s Brendan Haisenleder gained more than 3,400 yards in his prep career despite nagging leg injuries. “I played as hard as I could and running even though it hurts. It’s the fight, the drive to keep going. You don’t want to give up.” (Photo provided by Lindsey VanTiem)

Mike was a 1985 graduate of Center Line St. Clement and All State in football and baseball. “His yapping at me made me a better player. That’s the discipline he gave me. Always try to take things seriously. Do my job.”

Brendan put himself through an intense conditioning program during the summer heading into his senior season. “I wanted to end my high school career with a bang,” he said. That he accomplished, and more, right from the start.

The day after the opening game, “I was pretty sore like I usually am throughout the week,” Brendan said. “The soreness usually goes away, but my left shin was way more sore than usual. It never really went away.

“So I played on it in the second game (against Michigan Lutheran Seminary). Thought maybe it was shin splints. I rushed for more yards (in a single game) than ever in my life (392 yards, 29 carries, 3 touchdowns).

“On the last play of the game, some kid hit me with a helmet or kicked me. After the game my shin swelled up a ton with fluid. My whole shin was a blood bubble. A doctor drained three syringes about this big (holding his hands about six inches apart).”

In week six at Everest, Brendan said, “I got hit on my right knee and the same thing happened. There was a blood bubble that formed on my knee. Once again I played through it. I didn’t want to miss any games.”

Brendan had the knee-draining procedure done twice more during the season, the last time at noon on the day of the state playoff district game against Everest.

Two weeks after the end of the season, Brendan had the knee checked and drained one more time. “Doctors said this was probably the last time. I hope so.” He’s also had his legs X-rayed and reports “there’s no structural damage.”

“I play for my family, my coaches and all the time they devote to our practices and games and they don’t get paid a lot for it, for my teammates working hard all the time. I don’t want to let anyone down by not playing.”

He continued: “I’m sore for four or five days a week the whole season. I love it, not that I love pain, but it’s the satisfaction knowing that I played as hard as I could and running even though it hurts. It’s the fight, the drive to keep going. You don’t want to give up.”

Brendan prays, too. “I pray to God specifically, but I like praying to Mother Mary, the mother aspect of it. She had a direct connection to God. And to St. Sebastian, patron of athletes.”

“He’s the best player I’ve ever coached,” said Joe Quesnelle, in his fifth year at Cardinal Mooney and 43 years total on the sidelines. “He tops them all. He’s the ultimate team player, one of the toughest young men I’ve ever met. He’s a leader on the team, leader in the classroom (4.15 GPA) and in the community.”

Boys basketball coach Mike McAndrews said, “He’s the best football player to ever wear a Mooney uniform. He took this program to new heights. He will be playing on Saturdays next year and will make a college coach very happy.”

Brendan has visited more than a half-dozen colleges checking out the opportunities of playing at that level. About his 5-foot-8, 190-pound stature, he argues, “Most running backs aren’t the tallest, usually they are 5-10 or 5-11. I’m a little shorter. I think I’ll be harder to tackle, closer to the ground. I think I’ll do well in college. I don’t think it’ll be too much of a shift.”

None will have a bigger heart.