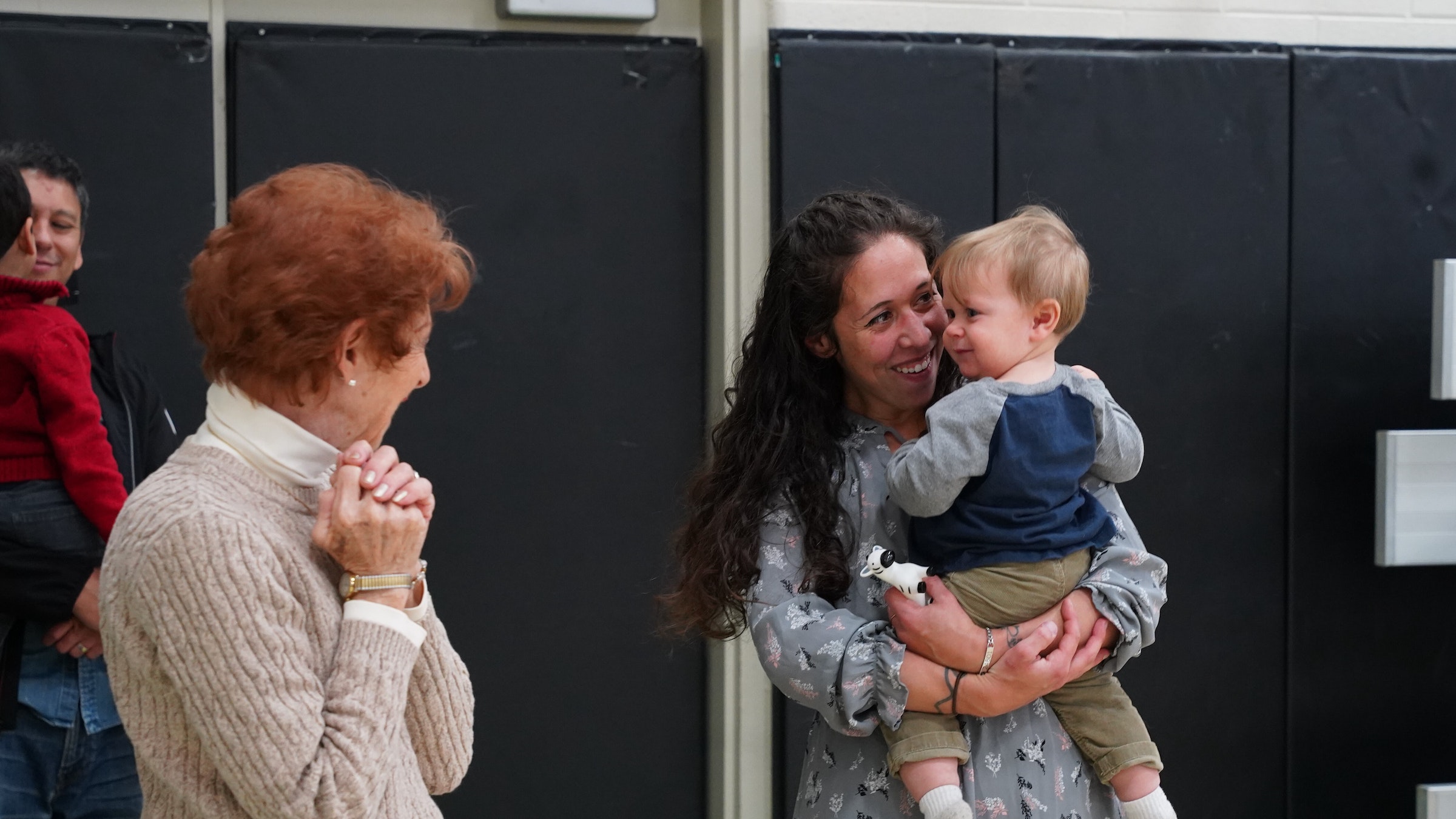 A mother holds her baby during a Nov. 13 event at Holy Family Parish in Novi following the passage of Proposal 3. Pro-life organizers spoke about what parishes can do to support mothers and babies and the next steps for the pro-life movement now that the abortion rights amendment is part of Michigan's constitution. (Photos by Daniel Meloy | Detroit Catholic)

That was both the title of the event and the question on everyone’s mind Nov. 13 at Holy Family Parish in Novi, where pro-lifers gathered to pick up the pieces and move forward after the passage of Proposal 3, which greatly expanded abortion in Michigan.

The answer, it seemed to most, was to do what the pro-life movement always does: continue to offer an alternative to abortion with faith, love and resolve.

Right to Life-Novi, the Archdiocese of Detroit and various pro-life organizations were on hand to present the work they do to care for expecting mothers, unborn babies, infants and new parents, and what more can be done following Proposal 3’s passage by a 56.6%-43.4% margin.

Roxanne Hundsrucker, Christian service coordinator at Holy Family, welcomed those gathered in the parish activity hall who wanted to know how best to carry out the Church’s mission to care for the vulnerable amidst the state’s new political environment. 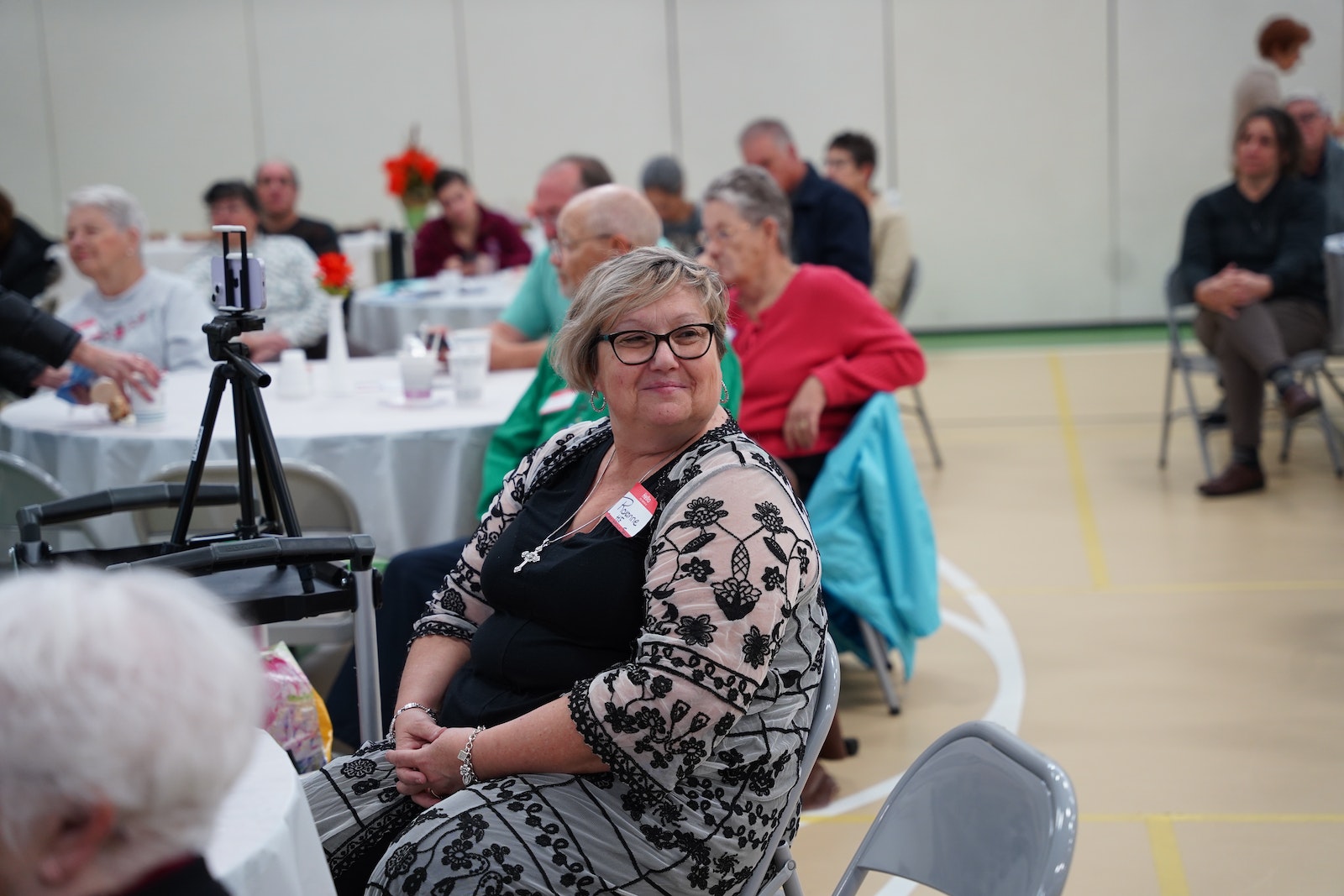 Roxanne Hundsrucker, Christian service coordinator at Holy Family Parish in Novi, said the parish began its Walking With Moms in Need program two years ago. During the panel, representatives from the Archdiocese of Detroit encourages parishes to consider ways to reach out to mothers in need of support during an unplanned pregnancy.

The event was a bit cathartic for those who prayed, canvassed, advocated and politicked against Proposal 3.

Patti Rose, president of Right to Life-Novi, lauded the efforts of those who spent weeks and months working against the proposal, despite coming up short in the final vote.

“I couldn’t be more proud of the Catholic Church, taking a very solid stand on this issue,” said Rose, who is also a Holy Family parishioner. “I need to point out that this wasn’t a religious issue; it’s a basic moral issue. We reached across lines and did a beautiful job, in my opinion.”

Rose said Proposal 3 supporters outspent their opponents $45 million to $20 million, with a lot of money coming from out of state. Data also showed the “no” campaign did well with married couples who have children, but struggled among single people, those who live in urban areas, and college students.

“In the end, they received 2.4 million ‘yes’ votes to our 1.8 million ‘no’ votes,” Rose said. “The sad part about that is there are 8.2 million registered voters in Michigan. So that means half of the voters had no voice in this. Instead, they voted and skipped that line, or they just didn’t vote. I’m looking at it as an opportunity to educate those people, grab their attention as potential allies the next time.” 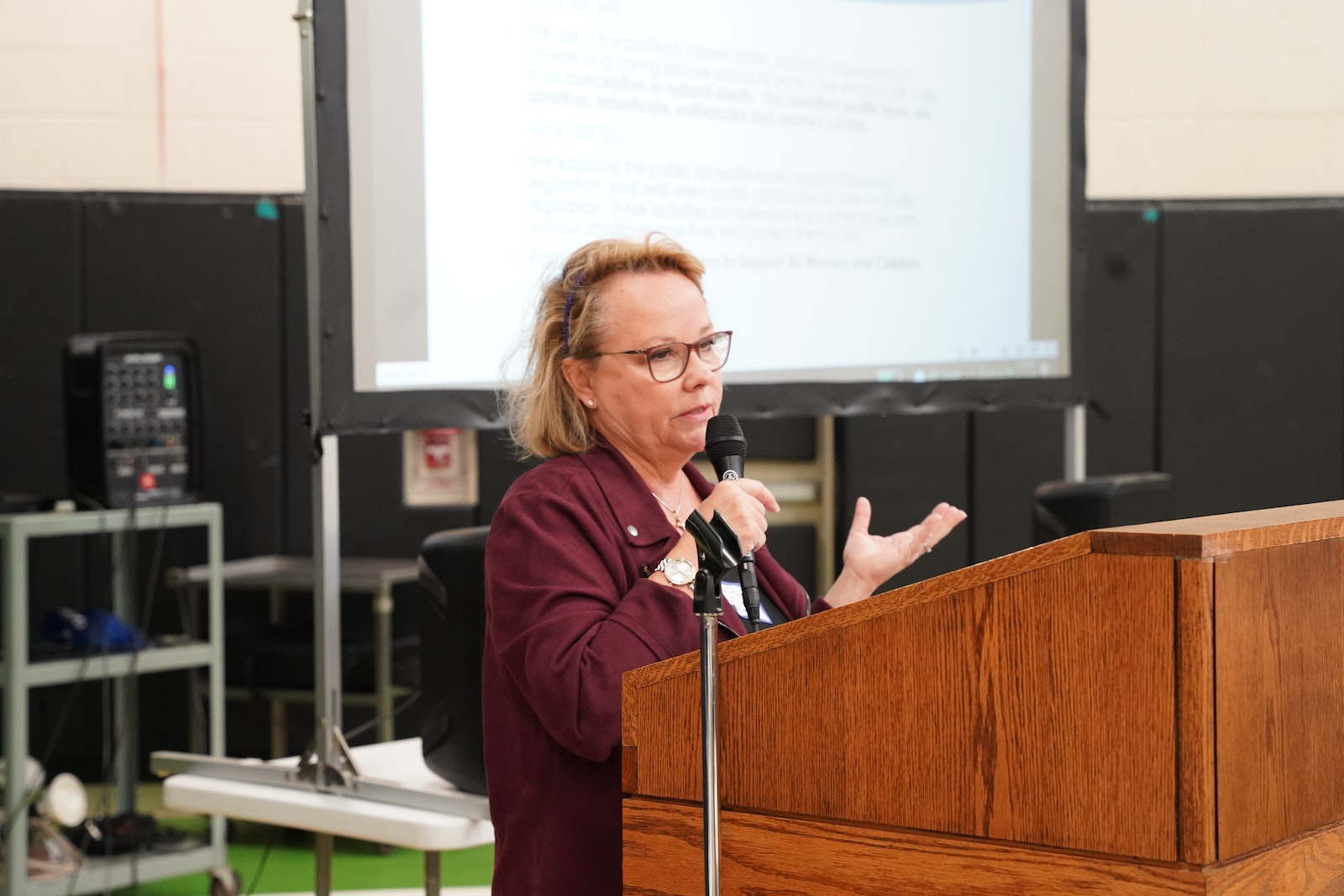 Patti Rose, president of Right to Life-Novi, outlined various pro-life laws that are now in danger with the Reproductive Freedom Amendment's passage.

Kathleen Wilson, pro-life coordinator for the Archdiocese of Detroit, spoke about what parishes can do to help men and women choose life, but first stopped to reflect upon how far the pro-life movement has come since the U.S. Supreme Court's 1973 Roe v. Wade decision, including Roe's monumental overturning this summer in the court's Dobbs v. Jackson Women's Health Organization ruling.

“I wasn’t sure if I would see Roe overturned,” Wilson said. “Maybe close your eyes for a moment and think about those who first helped you see the sanctity of your own life and the sanctity of the unborn. Who has labored in this vineyard, but maybe didn’t live to see Roe overturned? They are part of your journey and why you want to be here today, to continue the work.”

More than 50 parishes in the Archdiocese of Detroit are in the process of setting up Walking With Moms in Need programs, Wilson said, which provide information and resources for women who need assistance in carrying their pregnancies to term and caring for newborns.

Wilson highlighted various organizations present at Holy Family for the gathering, including Mother and Unborn Baby Care, the Knights of Columbus, Project Rachel, The Lennon Center, AAA Pregnancy Resource Center and Mary’s Mantle, as bastions of the pro-life movement.

“If you want to help, challenge yourself by asking, ‘What is God calling me to do?’” Wilson said. “What's one more thing I might be able to do? The first one is volunteering."

Wilson urged people to visit aod.org/walking-with-moms-in-need to learn what's being done in their parish or community, as well as to find volunteer opportunities.

"It will point you to a ministry that matches your skills. If you are an accountant, can you give an extra five hours a month?" Wilson said. "There are all sorts of jobs and tasks that can be done to help these centers.” 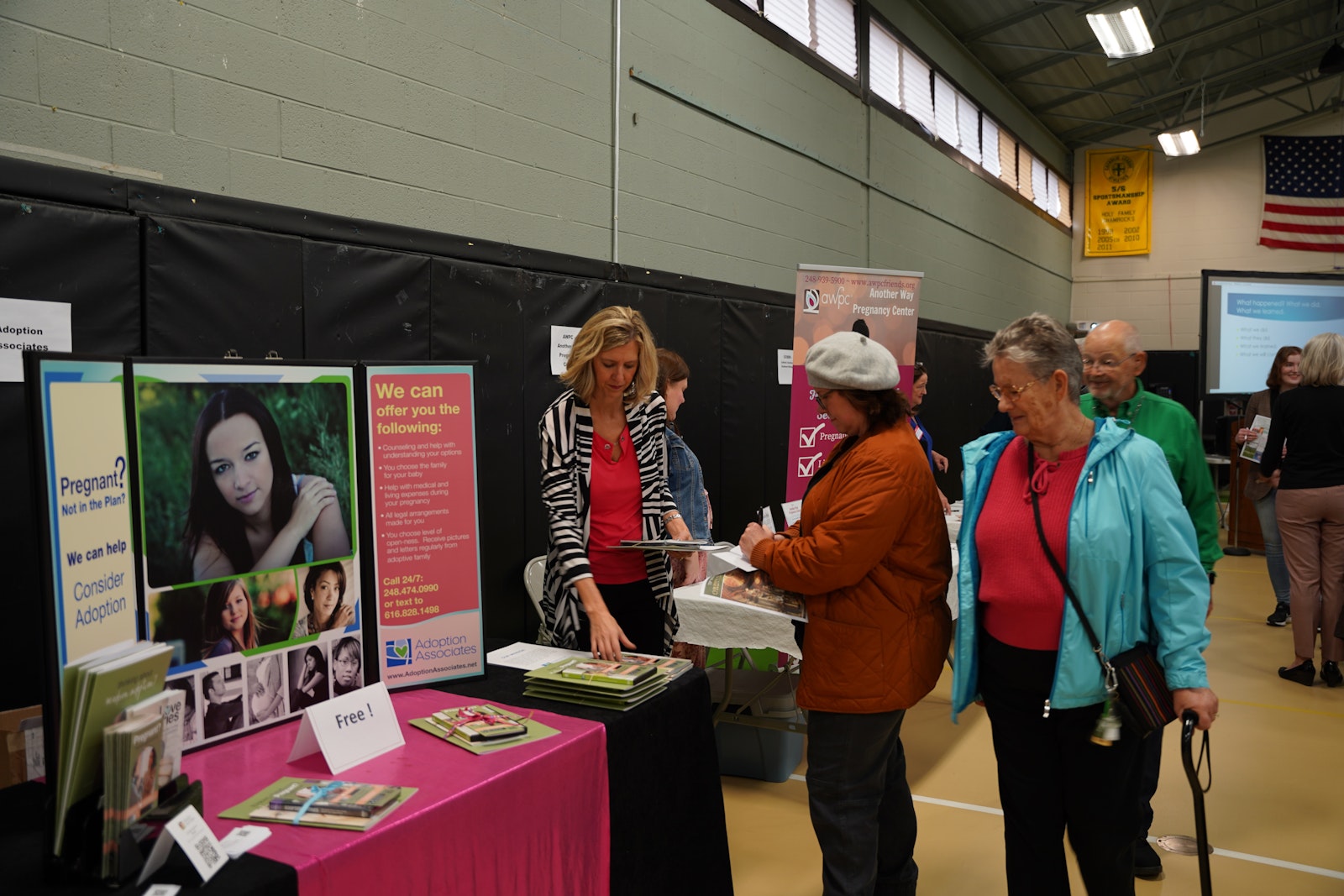 Pro-life ministries across southeast Michigan had booths set up at the Walking With Moms in Need forum at Holy Family Parish in Novi, explaining the services offered to pregnant moms and mothers of infants and how volunteers can assist in pro-life efforts.

Even after Proposal 3’s passage, there is plenty left to do on the political and legal side of the pro-life movement, Rose said, particularly when it comes to advocating in the courts regarding the implementation of the language of the amendment to Michigan’s constitution.

“We are going to continue to fight for the unborn,” Rose said. “As one of my pro-life colleagues said, ‘If abortion doesn’t stop, neither will we.’ In some respects, we are reset to the days of Roe, where we are going to keep on keeping on, educating people, and doing what we do. So, let’s see what we can do now.”

Many pro-life laws in Michigan are now threatened by the Reproductive Freedom amendment, Rose added, so it is up to pro-lifers to continue to advocate on measures such as partial-birth abortion, protections for infants born alive, and conscience rights for pro-life physicians.

“This amendment is going to lead to an awful lot of lawsuits,” Rose said. 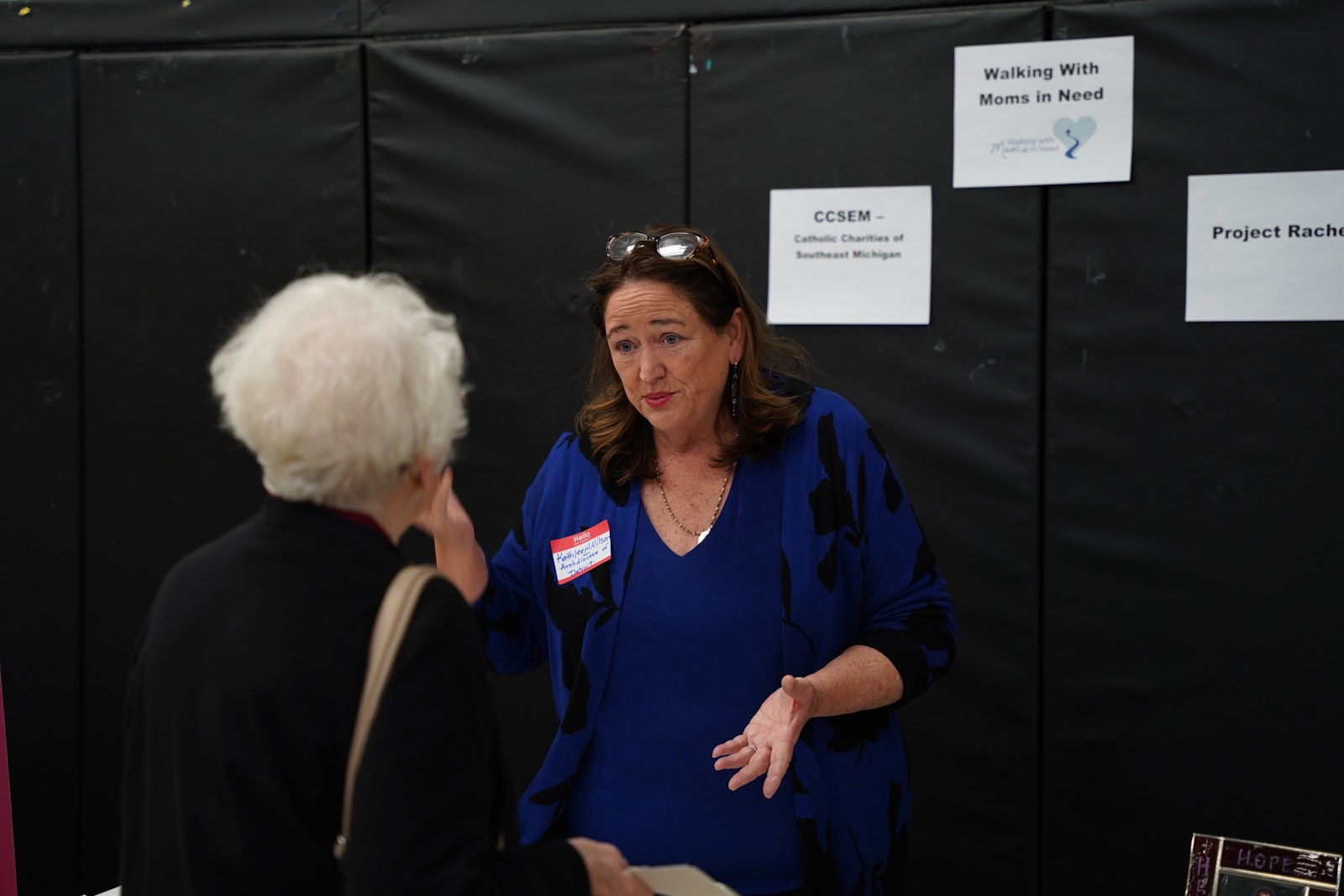 Kathleen Wilson, who directs pro-life outreach for Archdiocese of Detroit, said parishes across the archdiocese are assessing the services, resources and ministries available to mothers in need in their areas and creating action plans to assist them.

After a long, drawn-out campaign centered on abortion, Wilson said, women who have had an abortion might be re-living traumatic experiences, placing a greater emphasis on programs such as Project Rachel, a ministry providing healing for post-abortive women and men.

“Statistics tells us one in four men and women will have been affected by a prior decision related to abortion,” Wilson said. “This is a time for us to really extend God’s mercy and forgiveness, to let people know there is hope and healing. Whatever parish you are in, make sure there is an advertisement for hope and healing after abortion.”

Wilson said the pro-life work of the Archdiocese of Detroit continues regardless of the outcome of Proposal 3.

“Our hearts are heavy, but this is a time for us to really put our faith in action as we love and want to save the babies and love and save the mothers as well,” Wilson said. “We want families to thrive together. We each have our own experiences and perspectives. We have to come together to work on this in our Families of Parishes, with all the different gifts and talents that have been given to us.”