Which laws would Proposal 3 invalidate? Michigan lawyers break down consequences 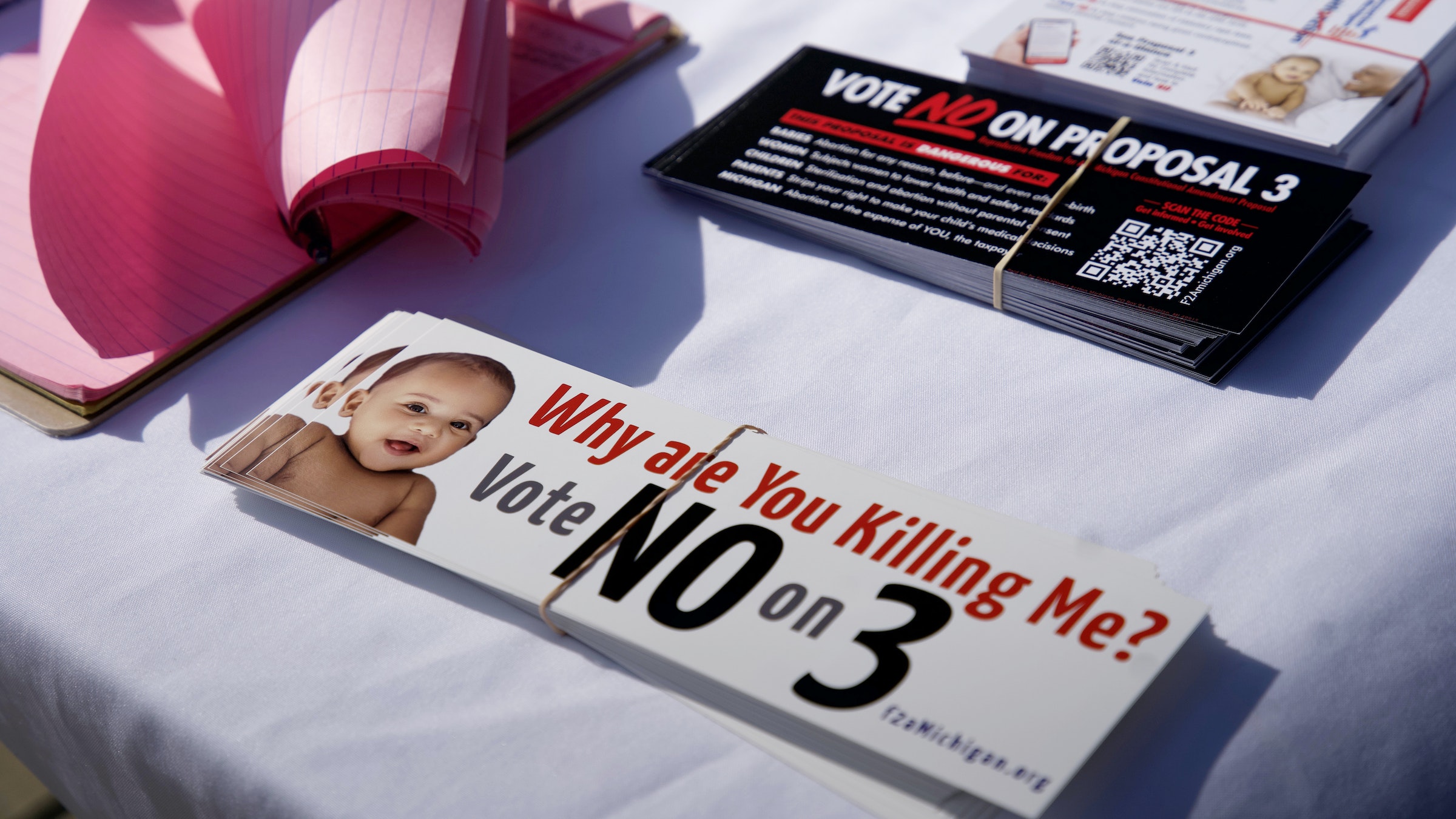 Signs and literature are pictured on a table during a rally against Proposal 3 at the Michigan Capitol in Lansing on Oct. 15. Despite arguments from the "pro" side, Proposal 3 really would threaten dozens of existing Michigan laws related to abortion, including parental consent, taxpayer funding for abortion and bans on late-term abortions, due to the intentionally vague text of the proposal, legal experts say. (Gabriella Patti | Detroit Catholic)

DETROIT — As Tuesday, Nov. 8, rapidly approaches, legal experts are urging Michigan voters to not just rely on the language that will appear on the general election ballot to make their decision about Proposal 3 — the sweeping constitutional amendment that would make abortion virtually unregulated in the state of Michigan — but to closely read the language of the entire proposal.

Proposal 3, or the “Reproductive Freedom for All” constitutional amendment, seeks to amend Michigan’s constitution to allow “unregulated abortion on demand through all nine months of pregnancy” and upend dozens of laws protecting women, minors, health care providers and victims of abortion, Archbishop Allen H Vigneron wrote in a letter dated Sept. 17.

While those in favor of Proposal 3 have argued the proposal is simply a return to Roe v. Wade and have denied claims that the proposal would overrule parental consent for minors seeking abortions, those opposed have pointed to the broad language as cause for concern and as problematic to Michigan's legal landscape.

The proposal begins with the words “every individual,” a phrase that doesn’t limit the class of people who hold the right by their age, John Bursch, JD, vice president of appellate advocacy for Alliance Defending Freedom and former Michigan solicitor general (2011-13), told Detroit Catholic.

“(The pro side) says, ‘Well, the state had the ability to allow parents to be informed and give consent under Roe v. Wade, (and) this wouldn’t be any different.’ Well, that is because Roe and Planned Parenthood v. Casey were judge-made rules; this is a constitutional provision that gives the right to every individual,” Bursch explained. “You can’t modify that by legislation. The phrase ‘every individual’ does not appear anywhere in the current Michigan and federal constitutions. It is unique to Proposal 3.”

Bursch said when rights are given in other constitutional provisions, they frequently come with age limitations.

“One of the examples the proponents of Proposal 3 bring up is voting," Bursch said. "You have a right to vote notwithstanding race or sex, but yet states limit it to those who are 18 years or older. That’s because the 26th Amendment to the U.S. Constitution specifically says the right to vote is for those 18 years or older. In order to give people below that age the right to vote, we’d have to amend the constitution. But (in Proposal 3), they wrote the provision to give everyone the right (to abortion) without age limitation.”

For Marcia McBrien, interim president of the Catholic Lawyers Society of Metropolitan Detroit, the use of the phrase “every individual” is an intentional feature of the proposal, not a bug. 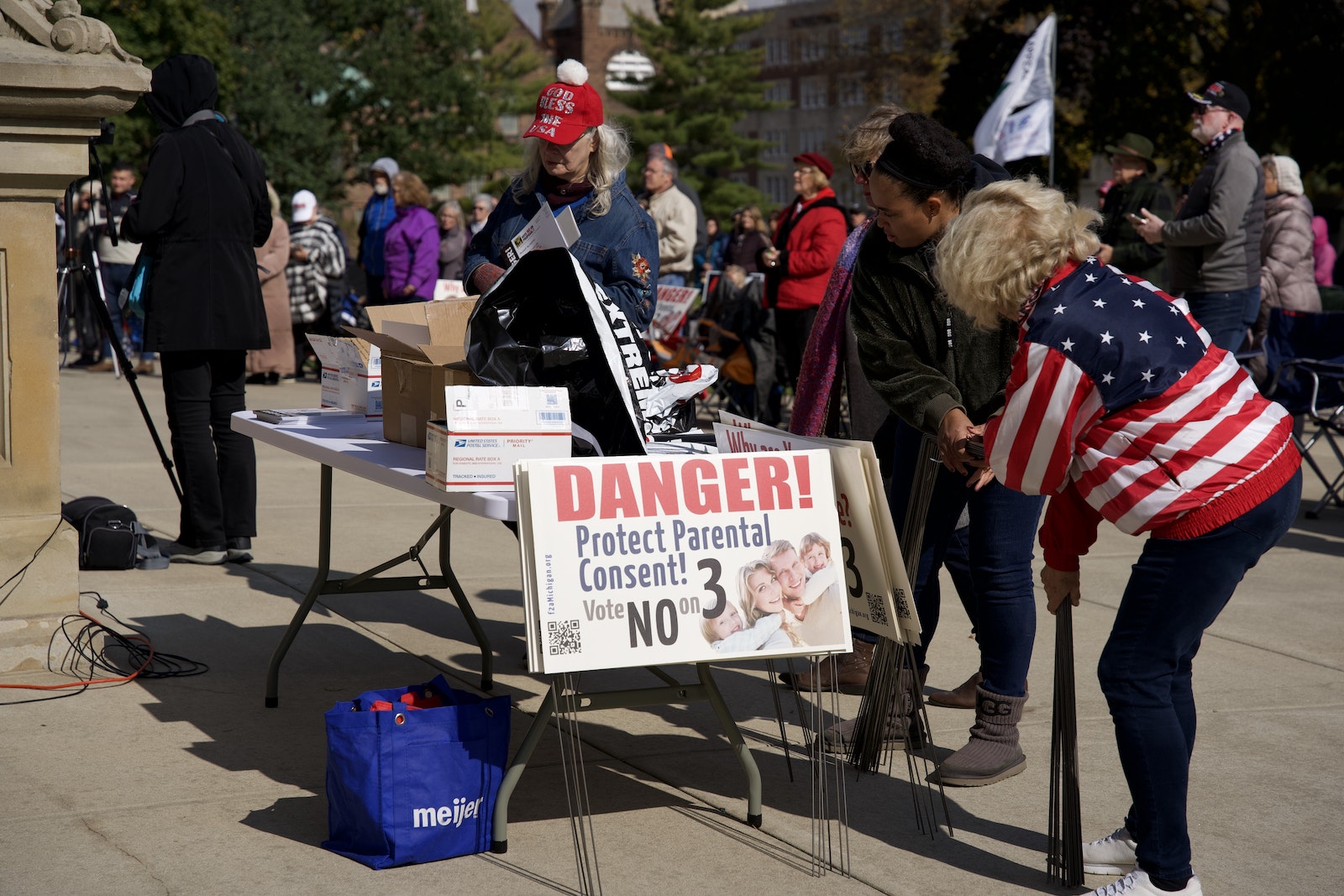 The inclusion of the phrase "every individual" instead of "every adult" in Proposal 3 is intentional, McBrien said, and proponents of the constitutional amendment have been seeking to overturn the state's parental consent laws for years.

“When you read a lot of the media coverage of Proposal 3, they will say this doesn’t really change parental consent laws,” McBrien explained. “Not only do I disagree, but some of the proponents of Proposal 3 also would disagree.”

McBrien cited an article published in Bridge Michigan on May 24, 2022, in which ACLU-Michigan's deputy legal director, Bonsitu Kitaba, didn’t dispute the claim that minors could get abortions without parental consent due to the intentional exclusion of age restriction.

Proponents of Proposal 3 made the language broad on purpose, Bursch said, pointing to 2019 and again in 2021 when, in the Michigan legislature, Planned Parenthood and the ACLU supported legislation to abolish Michigan parental consent and notification law for abortions.

“When they say it is bald-faced lies and fear-mongering to say that this would abolish parental consent, that’s contrary to what the words say — they were chosen intentionally,” Bursch said. “And it is also contrary to what Planned Parenthood and ACLU supporters wanted from the beginning.”

The loss of parental consent is far from the only legal concern, McBrien said. The ballot version of the proposal ends with a clause stating Proposal 3 would "invalidate state laws conflicting" with it, which could include as many as 41 existing laws.

The laws invalidated could include ultrasound viewing laws, a ban on partial-birth abortion, the prohibition of taxpayer-funded Medicaid dollars being used for abortions and more, Bursch said. Also invalidated could be a Michigan law that states abortion procedures may only be performed by doctors, he added.

The amendment specifies the state shall not “penalize, prosecute, or otherwise take adverse action against someone for aiding or assisting a pregnant individual in exercising their right to reproductive freedom with their voluntary consent,” Bursch explained.

“It is important to note that that says 'voluntary consent,' not 'informed consent,' which would be the standard if you had any other medical procedure,” Bursch said. “If a mother would say, ‘I am fine having a nondoctor assist with the abortion,’ then the state would have no ability to (enact) a contrary law because it would violate that individual's autonomous decision-making.”

While many of these points have been argued back and forth, Bursch feels not enough attention has been paid to another portion of the proposal, which says: “the state shall not discriminate in the protection or enforcement of this right.”

This provision puts bans on tax-funded abortions at risk because if the state allows funds to be spent on common surgeries such as kidney transfers, it would arguably be discrimination for it not to allow funding for abortions, Bursch said.

The proposal also could allow for late-term abortions, Bursch explained.

While the proposal says the state "may regulate the provision of abortion after fetal viability," Bursch points out, there is an important comma following the phrase.

“After ‘viability,’ there is a comma, and it says: ‘provided that in no circumstance shall the state prohibit an abortion that, in the professional judgment of an attending health care professional, is medically indicated to protect the life or physical or mental health of the pregnant individual,’” he said.

The "mental health" exception written into the provision is an enormous loophole that could effectively allow abortions at any point during pregnancy, Bursch said.

“If a mom comes in, say at 7 months, at that point the baby is clearly viable, and the state could prohibit (an abortion). 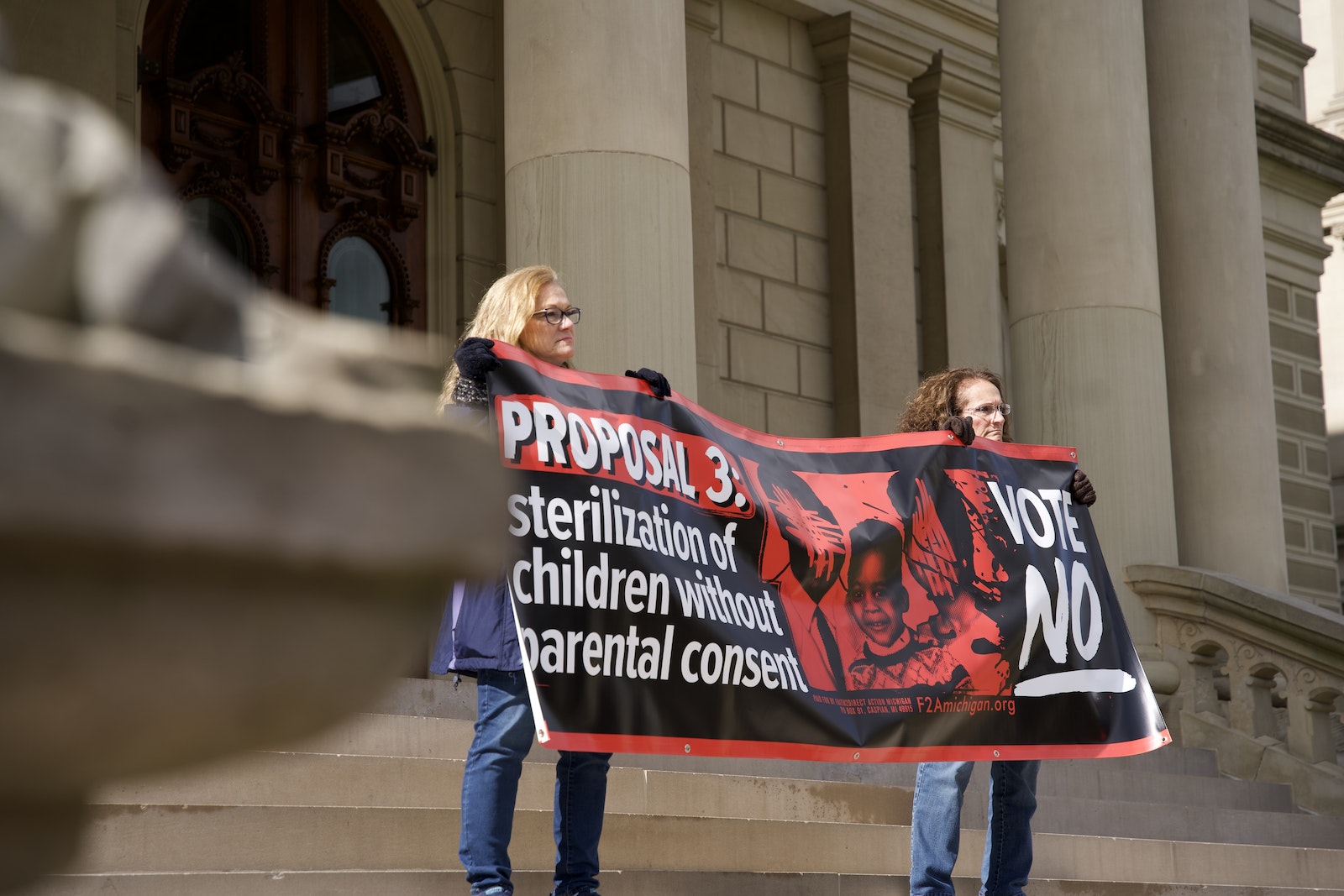 A carve-out in the proposal that allows abortions based on the "mental health" of the mother, at the discretion of the attending health care professional, means an abortionist could make the decision to perform an abortion at any point during pregnancy, Bursch said.

"If the mom says, ‘I am really anxious about having this baby; I am in the middle of an important time at work …’ that would be enough for the attending health care professional to authorize the abortion and check the mental health exception box,” Bursch explained. “Proposal 3 directs that a court would have to defer to the professional judgment of the abortionist.”

Proposal 3 is an example of why making laws on complex issues such as reproductive rights via ballot proposal is a bad idea, McBrien said.

The legislative process is necessary to discuss the risks, flaws and consequences of a law and to clarify the language. That process did not play out when Proposal 3 was drafted, McBrien said.

In all, Proposal 3 grants far too much power to the abortion industry to police itself, which is a scary proposition, regardless of how one feels about abortion, Bursch said.

“It effectively ensures there will be no safety regulations unless abortionists agree to them, and even then, mothers getting abortions could dispense with them. It protects grossly negligent abortionists,” Bursch said. “When you have that phrase, ‘The state cannot take any adverse action against someone for aiding or assisting in an abortion’ — well, a malpractice lawsuit has to have a judgment at the end of the day, and a judgment is a state action, issued by a state court.

"Even if you had an abortionist who maimed or killed the mom as well as the baby, they would have a constitutional defense to any malpractice action to their gross negligence," Bursch said. "So for all those reasons, no matter how you feel about abortion, you should vote no on Proposal 3.”