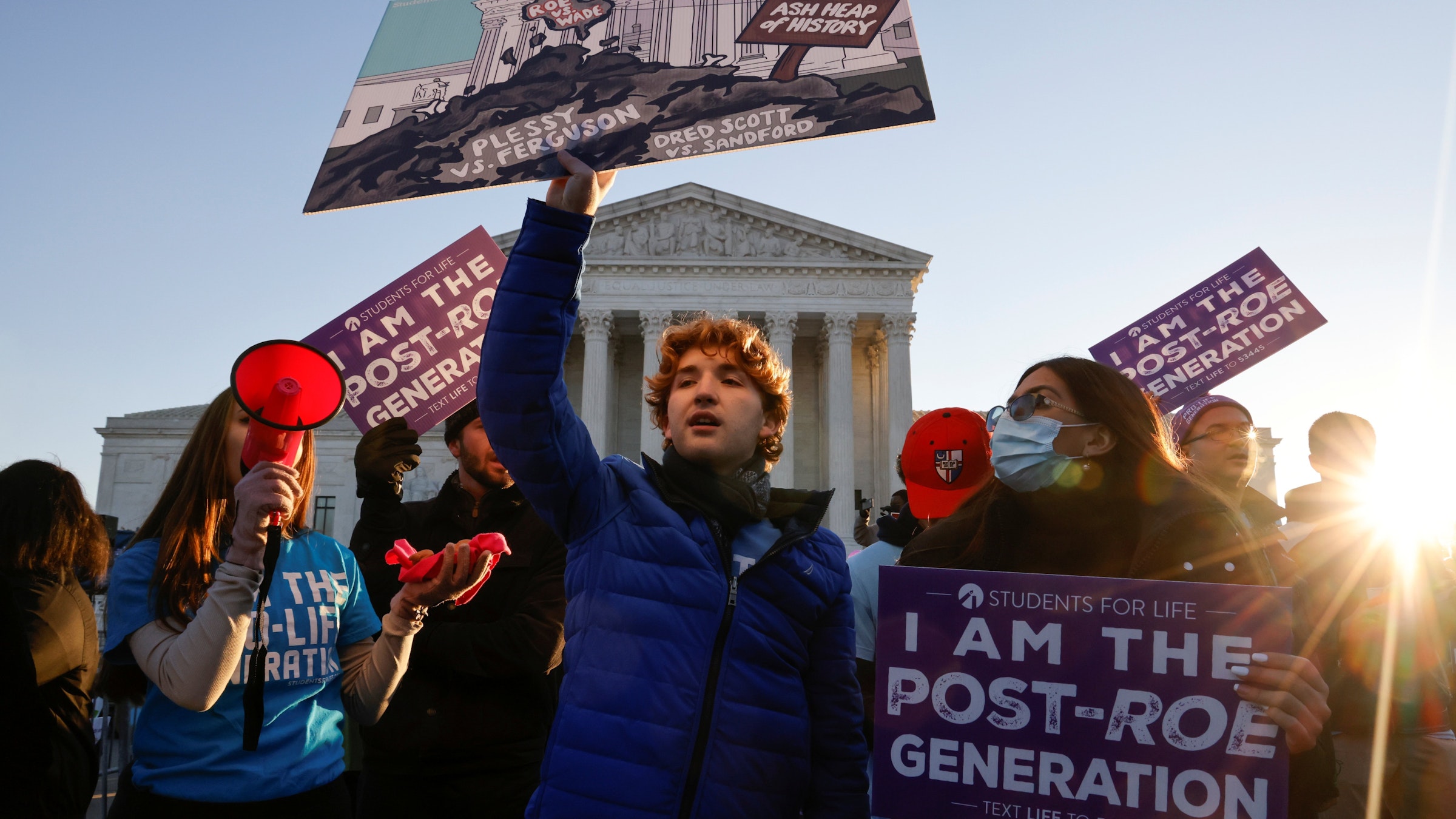 Pro-life activists and other supporters protest outside the U.S. Supreme Court building in Washington Dec. 1, 2021, ahead of the court hearing oral arguments in the case Dobbs v. Jackson Women's Health Organization, an appeal from Mississippi to keep its ban on abortions after 15 weeks of pregnancy. (CNS photo/Jonathan Ernst, Reuters)

The U.S. Supreme Court could rule to overturn Roe v. Wade. Or it might not. That was true before, and after, a draft decision in the current Dobbs case before the court recently broke out into the public.

But what we know — and have known — is regardless of what happens next, the mission to ensure legal protection of the unborn and to build up a culture of support for mothers and children remains unfinished.

That is very much the case here in Michigan, even if we are one of few states with legal protection against abortion already in place before Roe. That century-old law against abortion is under attack, even before a possible draft decision in Dobbs leaked.

The state legislature in 1931 approved a law to criminalize abortion except in cases to save the mother’s life. The law does not target women who undergo an abortion, but rather medical professionals or others who seek to take the lives of the unborn.

The 1931 law was an update to an older statute from 1846 prohibiting abortion. This law has sat on the books since then, even after the U.S. Supreme Court guaranteed nationwide access to abortion in the 1973 Roe ruling.

But in recent weeks, Gov. Gretchen Whitmer and Planned Parenthood have launched a legal effort to strike down Michigan’s law protecting the unborn.

Because of this, the Michigan Catholic Conference (MCC) has joined with Right to Life (RTL) of Michigan to step in and defend the state ban on abortion, because the law needs someone to defend it.

Planned Parenthood’s suit was filed against Attorney General Dana Nessel, who has said she will not fulfill her duty and defend the state law, nor will she allow anyone in her office to do so from behind a conflict wall.

Gov. Whitmer’s similar suit was filed against several county prosecutors, and of those who belong to the same political party as the governor, they agree with her and will not fight the lawsuit.

The multi-front legal maneuver is meant to get ahead of what the U.S. Supreme Court decides to do in Dobbs. Indeed, the leak of the draft Dobbs opinion that proposes to overturn Roe has prompted Gov. Whitmer and Planned Parenthood to recommit their efforts to try to keep abortion legal here in Michigan.

To provide counsel in these matters, the MCC and RTL have retained a notable constitutional lawyer — John Bursch with Alliance Defending Freedom. He is the former solicitor general for the state of Michigan, has argued cases before both the U.S. and Michigan supreme courts, and is a proven legal defender of pro-life and religious freedom causes.

But you might be asking yourself: What can I do? As always, it starts with prayer — for our elected officials, for the justices and judges involved in these cases, and especially those impacted by the tragic outcomes from abortion. We must continually commend everything to the loving hands of our almighty God.

But while legal landscapes for abortion might soon change, the goals remain the same — ensuring legal protection for the unborn and building up a supportive culture for mothers. Yet efforts to reach those goals must be renewed.

As our U.S. bishops have called for, we must “redouble our efforts to accompany women and couples who are facing unexpected or difficult pregnancies, and during the early years of parenthood, offering them loving and compassionate care.”

The Church has been caring for women and children and will continue to do so. Now is the time to join those existing efforts, by supporting your local pregnancy resource center or Catholic charity agency, or by organizing an effort in your parish to assist in the development of a Walking with Moms in Need program in the parish.

Even if Roe falls, legal protection for the unborn will not be realized everywhere. That’s where engaging in advocacy comes in: As faithful Catholics, your voices are crucial in reminding public officials they must work to build a society that protects all human life.

One way to do that is to join our Catholic Advocacy Network, which keeps members informed of legislative matters and provides a platform for Catholics to directly contact elected officials and weigh in on issues of importance to the Church, such as protecting the right to life.

Finally, there is one more way to help protect life: Planned Parenthood is also backing a petition drive to put a right to abortion in the state constitution, and thus wipe away Michigan’s laws protecting the unborn and their mothers.

The MCC is also fighting this petition, and we encourage you to decline to sign these petitions if you see them, and make sure your friends and family don’t sign them either.

While efforts to allow abortion on demand will likely become more aggressive, prayers, legal efforts, and grassroots advocacy are needed more than ever to defend the unborn and women affected by the tragedy of abortion. Will you join us?

The Word from Lansing is a regular column for Catholic news outlets and is provided by Michigan Catholic Conference, the official public policy voice of the Catholic Church in this state.