Lessons to be learned from Ukraine's witness 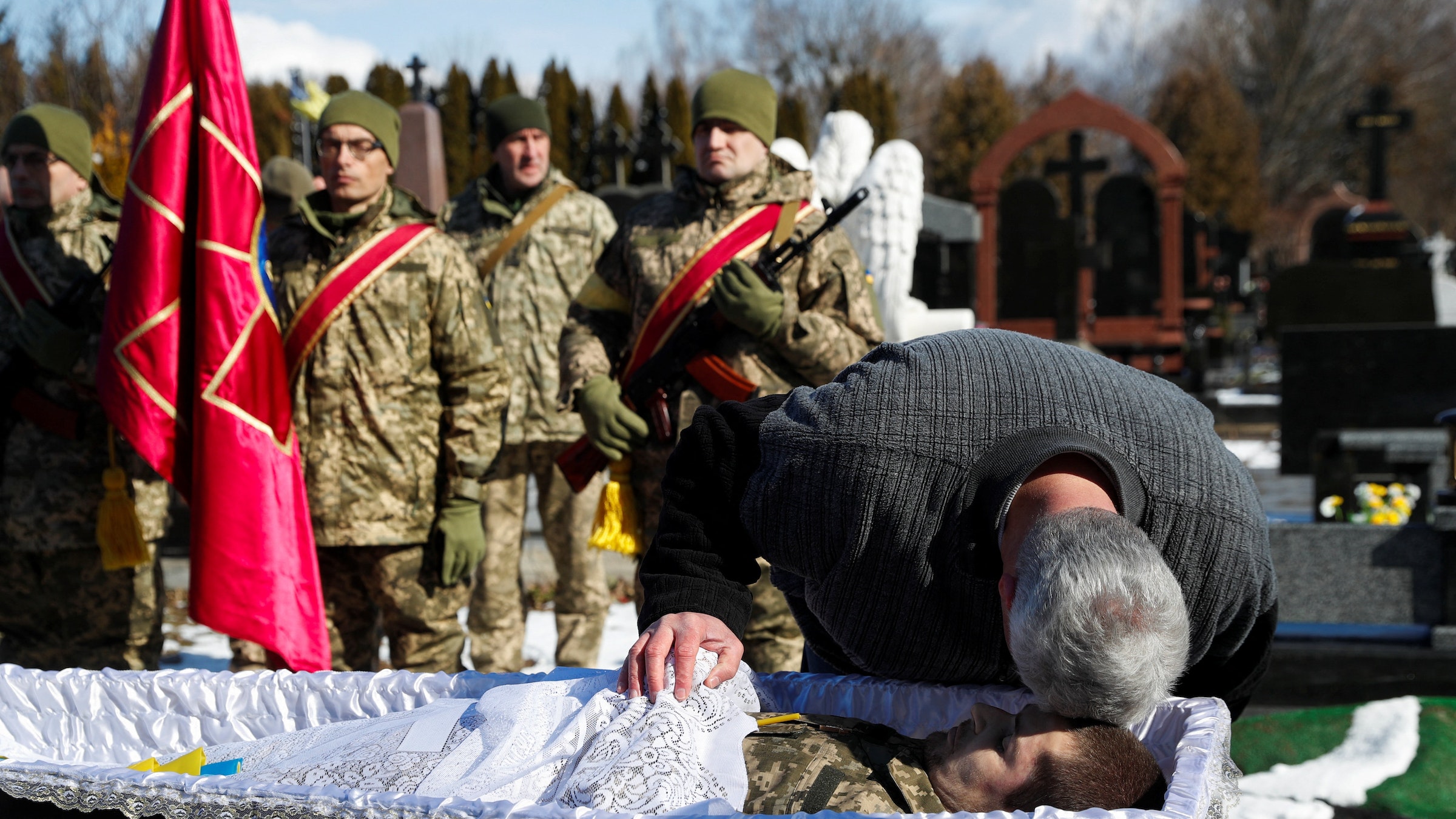 A man grieves over the body of a soldier with the Ukrainian Armed Forces during his funeral in Kyiv, Ukraine, March 8, 2022. The solider was killed during Russia's invasion of Ukraine. (CNS photo/Valentyn Ogirenko, Reuters)

Putin's war is teaching us something about ourselves, if we are paying attention.

The scenes of brave Ukrainians standing in front of tanks, making Molotov cocktails, picking up arms to fight an overwhelming aggressor, taps into some powerful American myths about righteous struggles and David vs. Goliath contests.

Think of "High Noon" with Gary Cooper taking on a band of killers. Think of "Red Dawn," a Cold War fantasy of high school students resisting Soviet invaders. Think of any "Star Wars" film with the Resistance always on the verge of extinction from the Emperor's endless supply of storm troopers.

Despite having been the world's most powerful nation for decades, we still see ourselves as Gary Cooper, as defenders of the underdog. And because we see ourselves this way, we feel a tremendous sympathy for the Ukrainian people enduring this violent and unprovoked aggression.

The Ukrainians' willingness to risk their lives for their homeland, their passionate defense of their country even at great cost, is a powerful display of patriotism. Ukrainian civilians blocking the road to the country's nuclear power plant with their bodies is breathtakingly heroic.

But it isn't just the Ukrainian courage in the face of an overwhelming foe. It is the spirit of the people. Our greatest strength is our unity, one Ukrainian told a reporter. What American cannot feel a catch in his throat when he hears those words.

These days, that is a strength we lack. We are a house not just divided, but torn asunder. And when we see the Ukrainians united even in the bomb shelters and the hospitals, on the front lines and on social media, I think we envy them.

The willingness to bear up under tremendous suffering is evident also in the exhausted refugees fleeing to Ukraine's neighbors -- Poland, Hungary, Moldova. Almost exclusively women and children seek shelter while their husbands and fathers and sons are conscripted to fight the invaders. Our concerns about gas prices, supply chains and masks seem trivial in comparison.

We can identify with the Ukrainians, but it is harder for us to admit that there are many war victims and many refugees just in this century that we have not felt the same kinship with.

People are streaming to our border, fleeing Putin-friendly dictatorships like Nicaragua and Venezuela, failed states like Haiti or countries broken by gangs and corruption, but many of us do not look on them with the same sympathy.

And while we applaud the Poles and Hungarians for receiving the Ukrainian refugees so generously, there are states in our country that would like to punish organizations helping the refugees at our doors.

Ukraine has for a moment united us. Its ordeal has united the world. But if there is a lesson to be learned here, it is that our empathy must be more than a momentary emotion sparked by the graphic images on the evening news.

The lesson of Ukraine, of COVID-19, of the huddled masses at our border, the victims of opioids filling our rural health clinics and the gunshot victims in our cities is that emotion is not enough. It is not a substitute for true solidarity.

We need to recover a culture of the common good, a concern for the least among us, the voiceless and the suffering. We need to think about the "we" a lot more than the "I."

"Every citizen is responsible for the common good," said Pope Francis. "And for Christians, it is also a mission." It is the foundation of Catholic social teaching, but it really is more basic than that. It is loving our neighbor as ourselves.