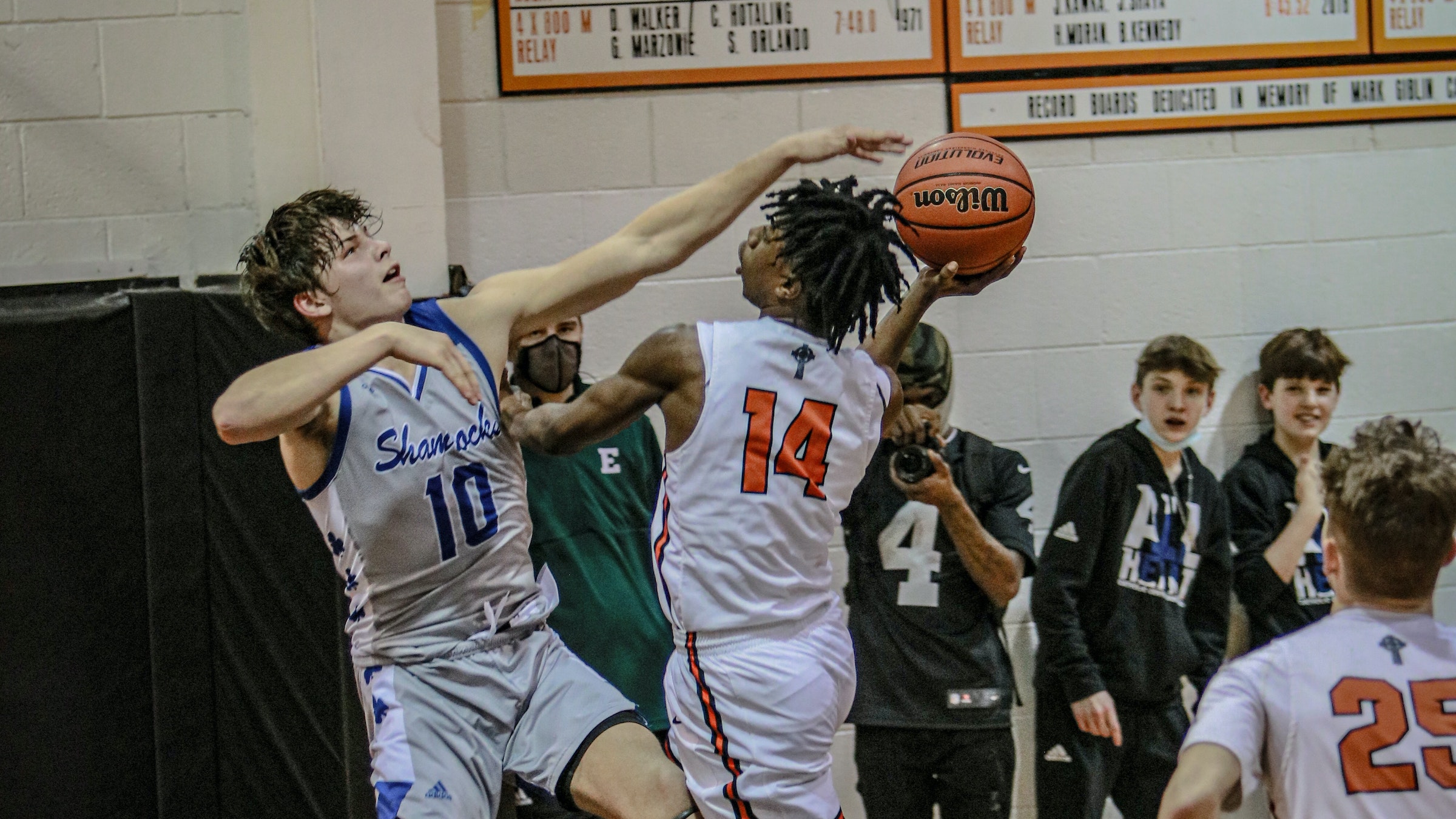 Catholic Central’s Josh Ross (10) blocks a potential go-ahead basket by Brother Rice’s Johnathan Blackwell in the closing seconds of Catholic Central’s 55-51 victory. The two teams along with St. Mary’s, U of D Jesuit and De La Salle are knocking one another around in the CHSL’s Central Division. (Photo courtesy of James Rivard)

DETROIT — The Catholic League’s boys basketball Central Division is in a state of upheaval.

In the not-too-distant past, the Eaglets of Orchard Lake St. Mary’s were perched in their aerie atop most everyone’s polls.

December was a monthlong Christmastime for St. Mary’s and their four league partners who romped over non-league opponents for a combined 28-3 record.

The gift-giving came to a sobering conclusion in the new year when Central Division squads began knocking one another around.

In the first two weeks, the Eaglets had their feathers ruffled and find themselves in the middle of the league standings with an ordinary 2-2 record.

Two teams — the Cubs of University of Detroit Jesuit and the Shamrocks of Novi Detroit Catholic Central —who polled in the bottom half of top 10 rankings are tied for first with 2-1 records.

And two teams — the Warriors of Bloomfield Hills Brother Rice and the Pilots of Warren De La Salle — who were rated in the top half of polls are tied for the bottom of the CD standings with 1-2 records.

Coach Brandon Sinawi is in his fourth year at Catholic Central, moving over from nearby Novi High School, where he directed the varsity for four years.

“This is the most fun a high school athlete playing basketball in the state of Michigan can have,” he said. “There are no easy nights. Every night’s a battle. Every coach is well prepared. Every team’s got all-star players.

“So this is why they come to the Catholic League to play in these types of games, in these atmospheres against unbelievable teams. It’s an absolute joy and so much fun to be a part of it.”

The picture should begin to become a bit clearer this week, the middle of this five-week nightmare. On Tuesday, Jan. 25, U of D Jesuit and Catholic Central clash on the Shamrocks' floor, each team seeking to gain a foothold on the league leadership with a third win.

At the opposite end of the standings, Brother Rice travels to De La Salle’s rowdy gym. They’ll both be fighting to avoid getting a third loss in division play.

On Friday, Jan. 28, Brother Rice plays at U of D Jesuit, and De La Salle will be at St. Mary's in a rematch of their first meeting won by the Eaglets 66-64 in double overtime.

Two nights after Catholic Central lost to St. Mary’s, the Shamrocks rebounded last Thursday with a tense 55-51 victory against Brother Rice before 900 spectators jammed in the Warriors' court.

Brother Rice bolted to a 12-2 start to the game. The Shamrocks roared out of a timeout to go on a 24-5 rampage, sparked by sophomore guard Chas Lewless, who was responsible for 16 of the points, four by way of long-distance 3-pointers. He finished with a game-high 22 points.

U of D Jesuit, which lost 49-46 to De La Salle, responded with a hard-fought 65-61 win over St. Mary’s. The Cubs led from start to finish. Junior point guard Sonny Wilson led U of D with 27 points. Charles Turner scored 16.

The Eaglets, which played five games in a 13-day stretch, have a week off before hosting De La Salle on Friday. “We’ve been playing on fumes,” said coach Todd Covert.

In first place, Goricki puts Detroit Martin Luther King, who lost to U of D Jesuit but beat Catholic Central.

Coach Kris Daiek’s squad at Riverview Gabriel Richard is 9-0, the only undefeated boys basketball team in the CHSL. They will be looking to win their third straight Cardinal/Intersectional championship.

The Dearborn Divine Child girls (ranked No. 4) can make a similar claim with their 11-0 record. Coach Mary Laney and the Falcons last won a CHSL title in 2012.