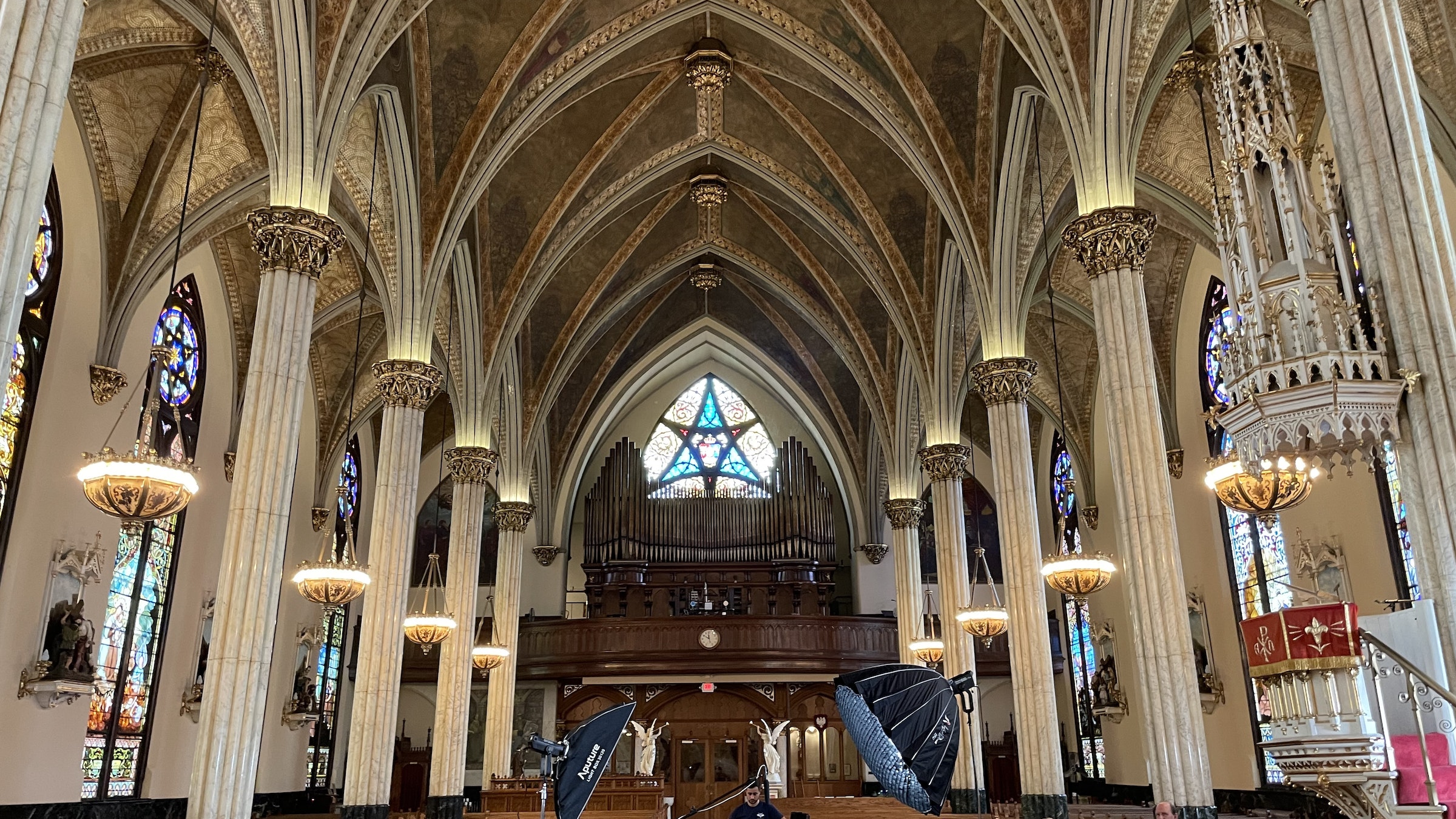 Award-winning filmmaker Keith Famie and his team set out to tell the story of Detroit through his new documentary, "Detroit: The City of Churches." The film will feature 17 different churches in Detroit, including Sweetest Heart of Mary Catholic Church, pictured above. (Photos courtesy of Keith Famie)

DETROIT — Since its inception in 1701, Detroit has been home to hundreds of churches and spiritual congregations. Throughout Detroit’s history, these churches have remained stalwart reminders and players in the Motor City’s strength and long, rich history.

Veteran filmmaker Keith Famie set out to tell the story of Detroit’s history through 17 different churches in a 90-minute documentary special, "Detroit: The City of Churches." After months of production, the film will debut during a special event Dec. 10 at the Filmore Theatre in Detroit (which is currently sold out) and Monday, Dec. 12, at 8 p.m. on Detroit Public Television (PBS).

“I think the magic of this film, which was always our intention, is it brings together a whole wide range of various spiritual leaders, different churches, faiths and believers all under one umbrella in harmony to sing praise to the Motor City that we all love and we have grown up in for generations,” Famie told Detroit Catholic.

Detroit: The City of Churches Trailer 1 from Visionalist Entertainment Prod on Vimeo.

Since 2004, Famie, along with his team at ​​Visionalist Entertainment Productions, has mostly focused his lens on Detroit, creating multiple Emmy-winning primetime programs. While stories about Detroit's churches have been told before, Famie said he felt inspired to take a closer look at the city from the perspective of Detroit's faith communities, spiritual leaders and congregations.

The film, introduced by longtime Detroit news personality and recent Catholic revert Chuck Gaidica, will feature many of Detroit’s iconic Catholic churches, including the Basilica of Ste. Anne, Sweetest Heart of Mary, Sacred Heart and the Cathedral of the Most Blessed Sacrament.

Viewers will also hear from spiritual leaders across Detroit, including Catholic leaders such as Archbishop Allen H. Vigneron, Msgr. Chuck Kosanke, Fr. Norman Thomas and others. 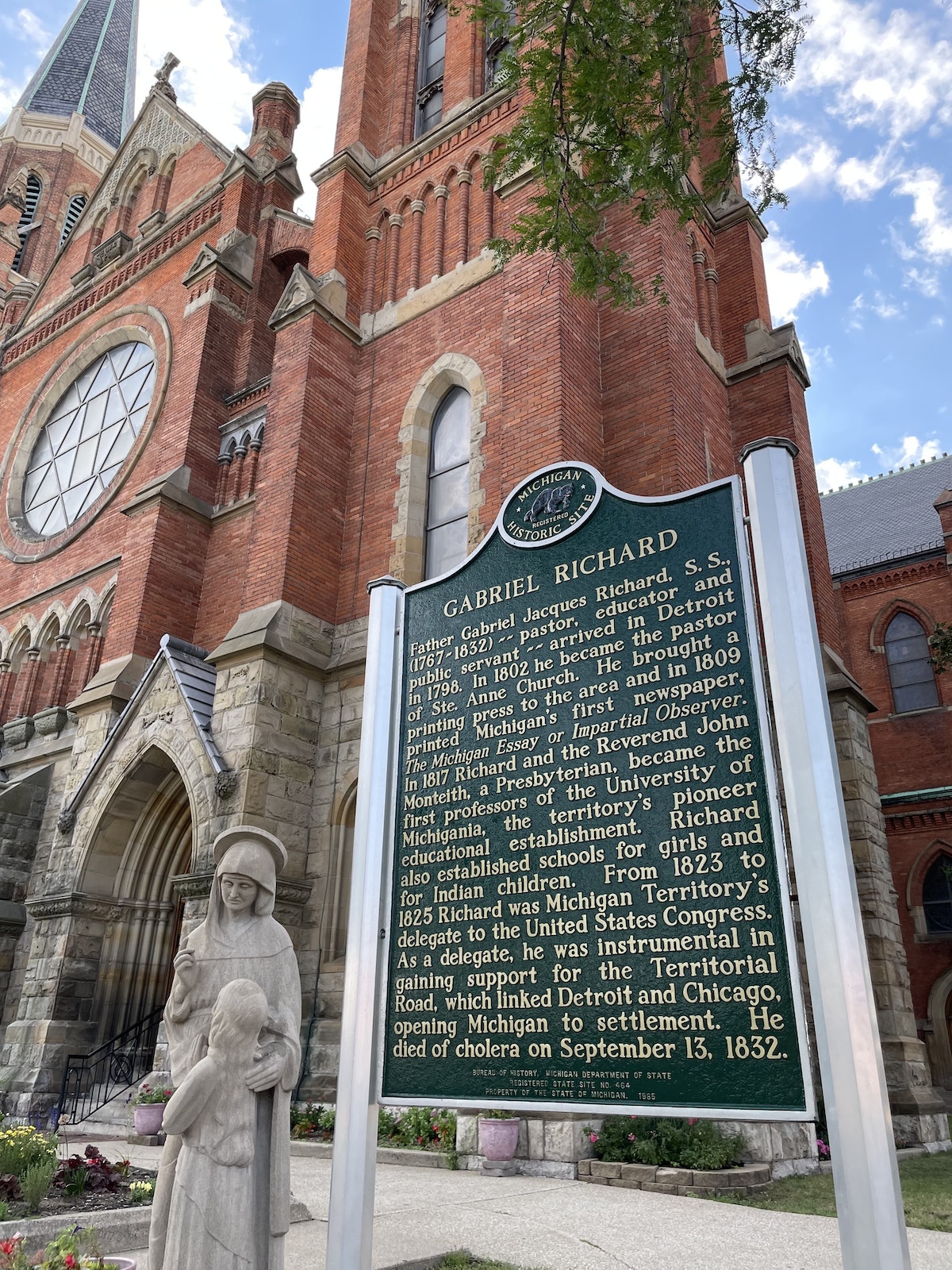 “When I set out to do this film, it was really (about), ‘How were the churches affected by the history of Detroit and how did they affect the history of Detroit?’” Famie said. “But once you step behind the walls of the churches and speak to the various spiritual leaders and start talking, various other stories start popping up. The film was unscripted, and we went in with the intention of, ‘Let's just see where the story takes us.’"

The film took on a whole new direction and found its momentum as Faime and his team explored each church and discovered stories they hadn't anticipated.

One example is the film’s exploration of stained glass. 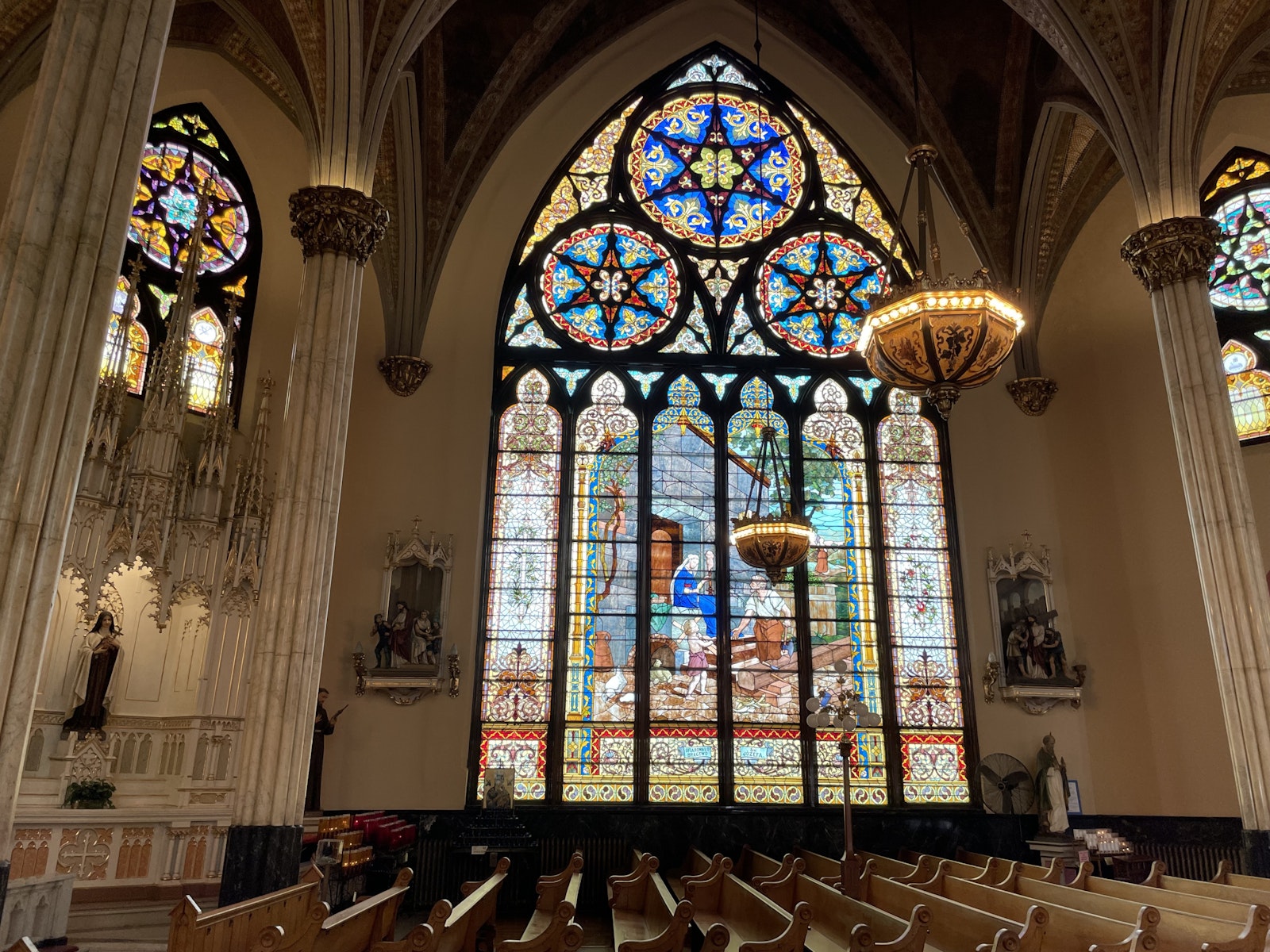 The story took on a whole new direction and found its momentum as Faime, and his team explored each church and discovered stories that they had not anticipated. One example is the film’s exploration of stained glass.

Through this journey, Famie also learned and told the history of Pewabic pottery, which is featured in many Detroit churches, as well as the history of church bells and organs.

“We learned that organs are nothing but a big box of whistles, and so we did a whole thing on organs at several of the churches,” Famie said. “At Sweetest Heart of Mary, they took us behind the organ, where there is a small room. Before there was electricity, before there was power, it was all hand-cranked. We went back there with the organist, and he showed us how two guys used to hand-crank (the organ) through the entire church service in a room that became sealed shut because of pressure.”

With the help of Fr. Thomas, the 92-year-old leader of Sacred Heart Catholic Church, the film explores Detroit’s impact on civil rights, including the 1967 riots.

Famie also included a section about Detroit's sisters and nuns, an exploration that has actually inspired his next film. 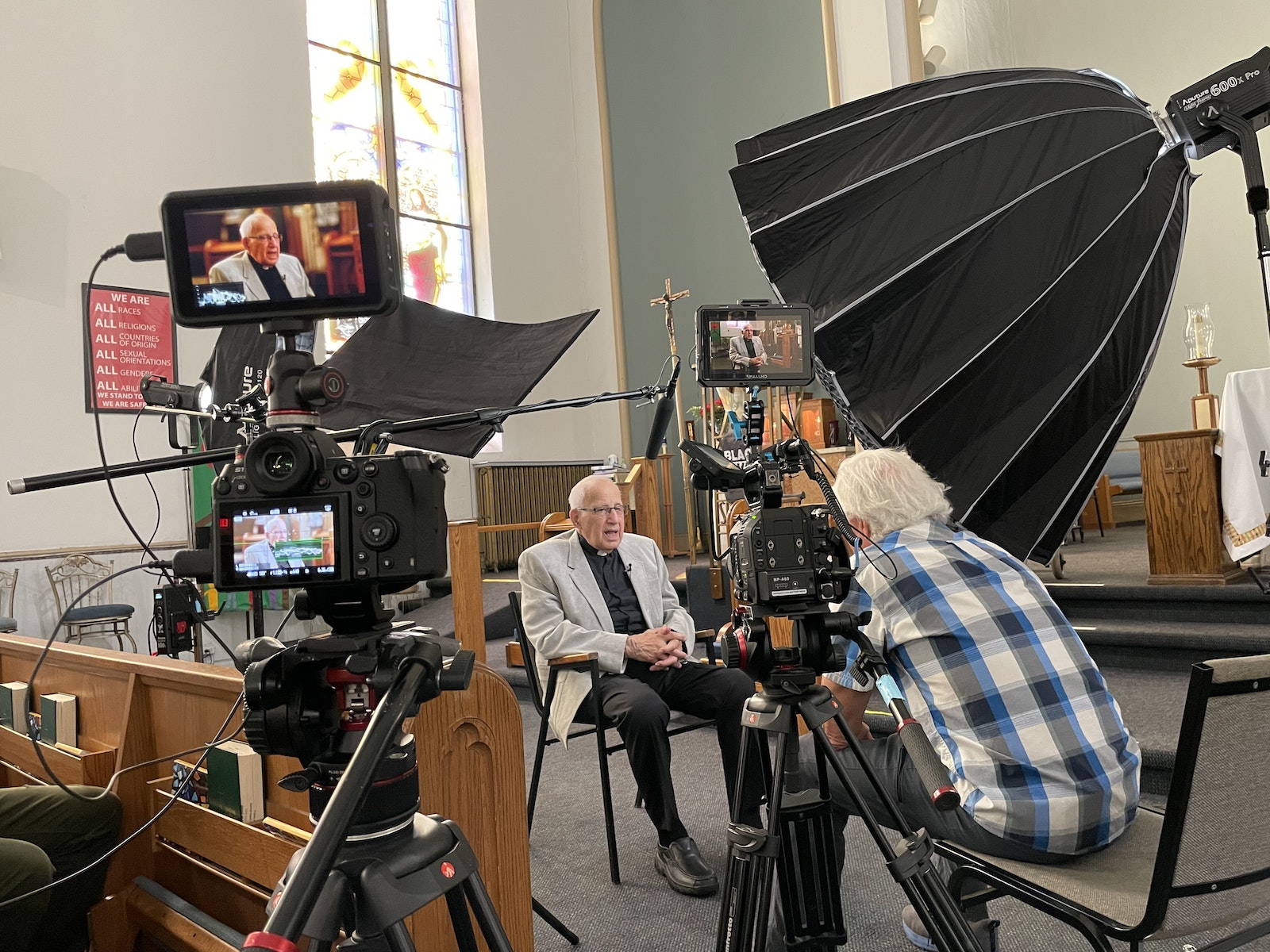 With the help of Fr. Norman Thomas, the 92-year-old leader of Sacred Heart Catholic Church, the film explores Detroit’s impact on civil rights, including the 1967 riots.

“Having personally grown up Catholic and having gone to an all-Catholic school when I was younger and having sisters and nuns as teachers, I wanted to shed a light on who I felt and believe wholeheartedly are really the unsung heroes in the Catholic world, and that is sisters and nuns,” Famie explained.

Famie said he “stepped back in time” to understand their history and role in education, medical services and social services in the city of Detroit, as well as their ongoing role in the city today.

“We are working on a film for next year, which will be called: 'The Calling' — those who choose the habit and the many life lessons they taught us,” Famie said.

Famie added the film will focus on the history of sisters and nuns, "but also the relevance of the work they are doing globally now, which is different than what we would have grown up with in the mid-20th century.”

Famie is excited at the prospect of his current film, "Detroit: The City of Churches," creating renewed interest and support for the city's spiritual congregations and their leaders, many of whom have seen a steady exodus of congregants moving from the city to the suburbs.

"Whether it is faith, spirituality or just curiosity, I think viewers will find a renewed interest to stop by and go in these churches, walk around and listen to the walls talk to you,” Famie said. “Hopefully, through that, individuals will find a new passion of support for these spiritual leaders and these custodians of these amazing historical architectural designs that you couldn’t recreate today.

“My goal and my hope is that this new excitement of passion may spur a whole new 200-year future for these old buildings and churches as people understand the significance they've had on Detroit's history and Michigan's history.” 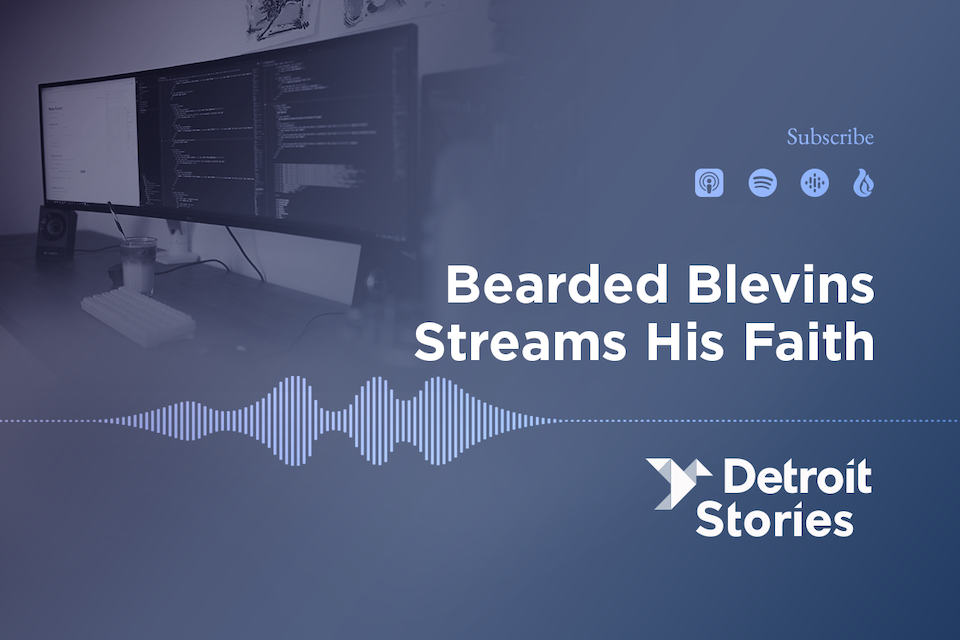