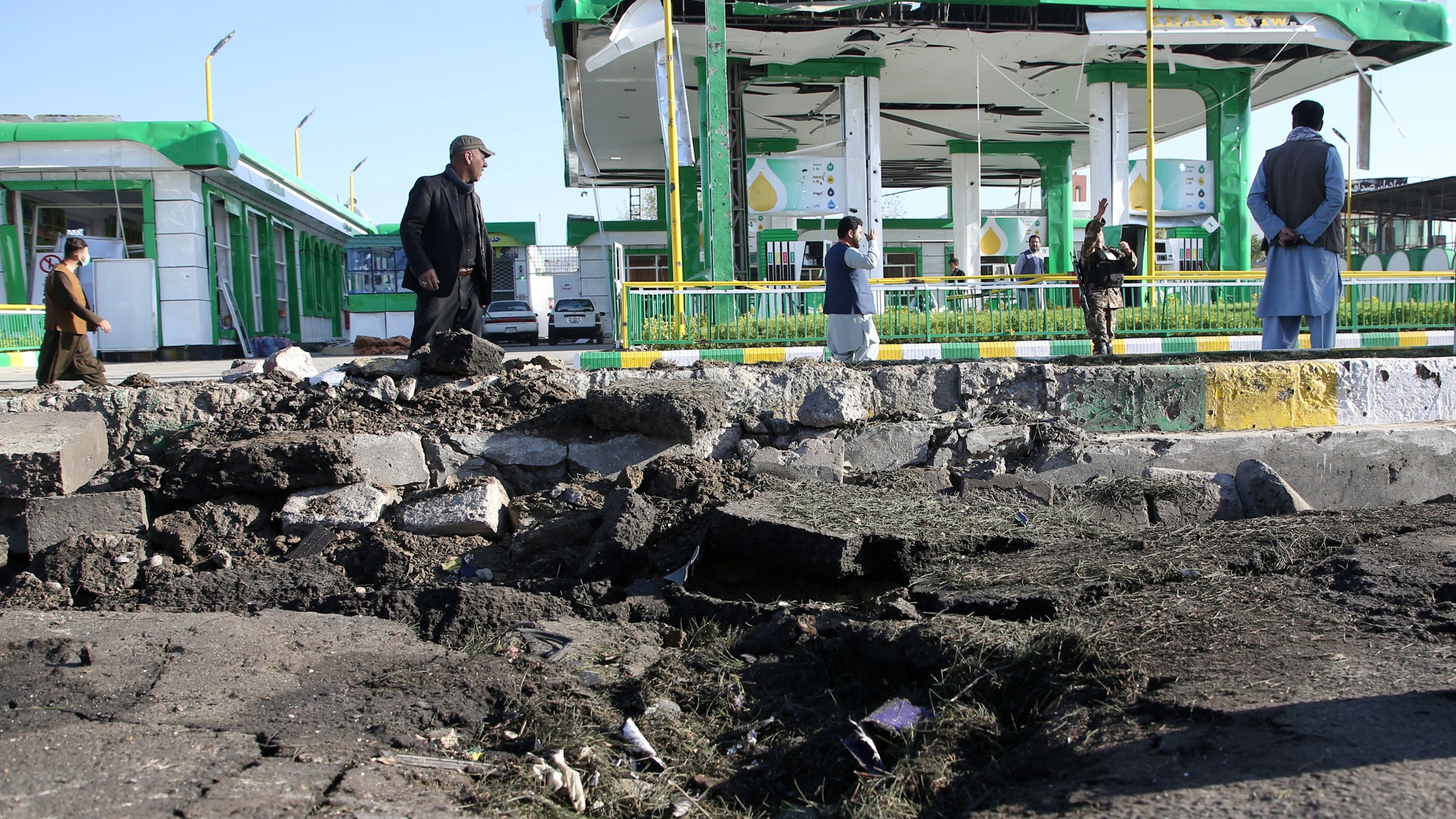 Afghan men walk past from the site of a suicide bomb attack in Kabul, Afghanistan, April 21, 2021. (CNS photo/Omar Sobhani, Reuters)

ROME (CNS) -- Although Barnabite Father Giovanni Scalese, head of the Catholic mission in Afghanistan, found himself back in his native Italy after the fall of the Afghan capital, his thoughts remained on the church he was forced to leave behind.

"We continue to pray for Afghanistan. We cannot abandon this country and its suffering people," Father Scalese said in an interview published Aug. 26 with SIR, the news agency of the Italian bishops' conference.

Father Scalese was among thousands of foreigners who had to flee the country after the Taliban, an extremist Islamic movement that ruled Afghanistan until ousted by a U.S.-led coalition nearly 20 years ago, took control of the country prior to the withdrawal of U.S. forces.

He, along with five Missionaries of Charity nuns and 14 orphaned and disabled children and young adults in their care, landed safely at Rome's Fiumicino airport Aug. 25.

According to a report by the Italian newspaper La Repubblica, the orphans, many of whom are in wheelchairs, are between the ages of 6 and 20.

"Our center is no longer open, it is closed and we are destroyed," a Missionary of Charity nun from Madagascar told La Repubblica. "It is done, there is no hope in Kabul.”

"I said it and I have done it," Father Scalese told the Italian newspaper. "I would have never returned to Italy without these children. We couldn't leave them there.”

The Italian priest was appointed by Pope Francis in 2014 as the superior of the Catholic Church's mission in Afghanistan. St. John Paul II, as pope, established the mission "sui iuris" in Afghanistan in May 2002, led by the Clerics Regular of St. Paul, known as the Barnabites.

The pontifical mission is housed in the Italian embassy, which was the largest contributor to the U.S.-led international military coalition. The sole parish in Afghanistan, the Chapel of Our Lady of Divine Providence, is located at the embassy.

The mission's work is limited to charitable and humanitarian activities because the Islamic faith is recognized as the state religion in the country of 37 million people "and conversion to other religions is a crime of apostasy," Father Scalese explained.

"Since its inception, the Catholic mission has never baptized any Afghans because this is stipulated in the agreements from the beginning," he added. "Our presence is exclusively at the service of non-Afghan, foreign Catholics. The Missionaries of Charity work with the Afghans in a totally neutral way ... and do not proselytize.”

Father Scalese told SIR that although he "felt concerned" after the Taliban took over the capital, he felt safe being inside the embassy.

"Outside the gates of our embassy there were Taliban (fighters) who, if they had wanted to harm us, could have done so. But absolutely nothing happened," he recalled. "I was more worried about the (Missionaries) of Charity, who had remained in their homes and were therefore more exposed and afraid.”

Nevertheless, Father Scalese said that while waiting to board the next available flight, "we never felt alone," and both church and state authorities were in constant contact with them.

Pope Francis "was interested in the matter and followed it," he said.

The Barnabite priest said the group attempted to leave the country several days before their arrival in Rome, only to be forced to turn back from the airport "because the situation was deteriorating.”

"We only managed to get through the entrance the other night. It was not easy to pass through so many people and the enormous tension," he said.

"The Taliban, among other things, had issued a warning that they would close the roads to the airport to Afghans, allowing only foreigners to pass through," Father Scalese added. "As soon as we arrived, we were put on a military flight that, after a stopover in Kuwait, arrived in Rome.”

Father Scalese told SIR that in his seven years in Afghanistan, he did not expect "such a sudden and abrupt conclusion.”

While the threat of the Taliban regaining control of the country was known, "we all hoped for a more negotiated conclusion" aimed at finding a compromise that would lead to the formation of "a transitional government or one of national unity," the priest said.

Instead, "within a few days everything collapsed: government, army, police forces. The Taliban did not fight to seize power, they just took it over. It was a good thing in part because they avoided a huge bloodbath. There have been deaths, but it is not a civil war," he said.

Although the Taliban have promised no revenge or retaliation against Afghan citizens who collaborated with U.S. and NATO forces, Father Scalese said many of those who helped had already fled the country.

Furthermore, he said, "those who are leaving the country these days are well-educated, prepared people. Their departure is an impoverishment for Afghanistan. I hope that the new Taliban regime will respect what it has declared in these days: no revenge.”

Father Scalese told SIR that despite his abrupt departure, "if the conditions were right for a return, I would have no problem returning.”

"But it doesn't depend on me. If the Holy See believes that there are conditions to resume the mission, why not?" he said.

"We are not concerned with politics but in serving the Afghan people," Father Scalese added. "It is not up to us to decide who should govern this country.”