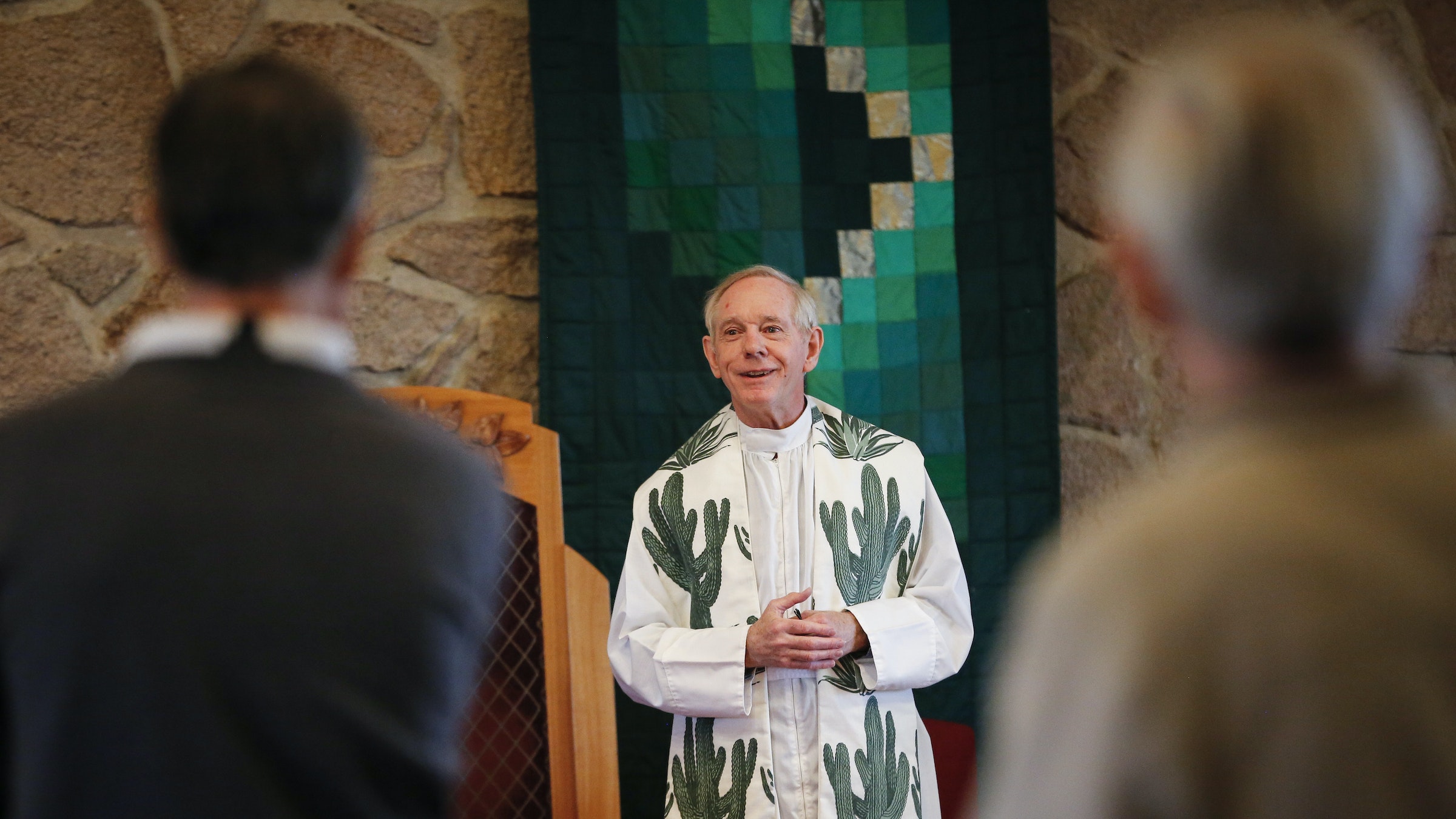 Jesuit Father Chris Corbally, an astronomer with the Vatican Observatory, celebrates Mass for members of the facility's Faith and Astronomy Workshop at the Redemptorist Renewal Center Jan. 13, 2016, in Tucson, Arizona. (CNS photo/Nancy Wiechec)

CLEVELAND (CNS) -- One more Jesuit has had an asteroid named for him.

Father Chris Corbally, a stellar astronomer at the Vatican Observatory, has had his name attached to a rocky body in the asteroid belt that orbits the sun in slightly less than four years.

The honor was a surprise, Father Corbally said.

"I'm not a kind of an asteroid guy" like some of his colleagues at the observatory, he said. "For me it came a as complete surprise. That's why it's kind of nice."

The particular asteroid, designated 119248 Corbally, is about a mile across in size. It was discovered Sept. 10, 2001, by Roy Tucker, a recently retired senior engineer from the Imaging Technology Laboratory at the University of Arizona.

Tucker has worked extensively with Vatican astronomers. His work included building and maintaining the charge-coupled device cameras used for digital imaging of celestial objects at the Vatican Advanced Technology Laboratory as well as on telescopes used by Father Corbally at the University of Arizona's Steward Observatory.

Naming an asteroid requires approval from a committee of the International Astronomical Union. Once named, a short citation about the person being honored is published in a circular from the IAU's Minor Planet Center.

Asteroids are small rocky bodies that orbit the sun. Thousands of them are located in the asteroid belt between the orbits of Mars and Jupiter. But some have orbits that bring them into other locations in the solar system.

"I'm very much a star man. But realizing that stars are in our galaxy, I'm also interested in galactic structure and history of star populations in our galaxy. My way of probing all this is through the individual stars," he told Catholic News Service.

The Jesuit's current research focuses on the characteristics of human sentience in the context of evolution.

Research by the Vatican Observatory has turned up at least 10 asteroids named for Jesuits, including St. Ignatius of Loyola, founder of the Society of Jesus.

Other asteroids have been named for Father Corbally's contemporaries: Brother Guy Consolmagno, director of the Vatican Observatory and president of its foundation, Father Richard Boyle and Father Jean Baptiste Kikwaya, astronomers at the observatory, and Father Robert Macke, a research scientist and meteorite curator for the observatory.

In addition, asteroids have been named for Father George Coyne, a onetime observatory director of who died Feb. 11; Father Christopher Claviu, whose mathematical measurements helped develop the Gregorian calendar; Father Roggiero Boscovich, an 18th-century mathematician; Father Maximilian Hell, who determined the solar parallax from observations of Venus as it transited in front of the sun in 1769; and Father Angelo Secchi, director of the Roman College observatory in Rome during the 19th century.