Marian opens volleyball season where it ended — No. 1 in USA and in Michigan 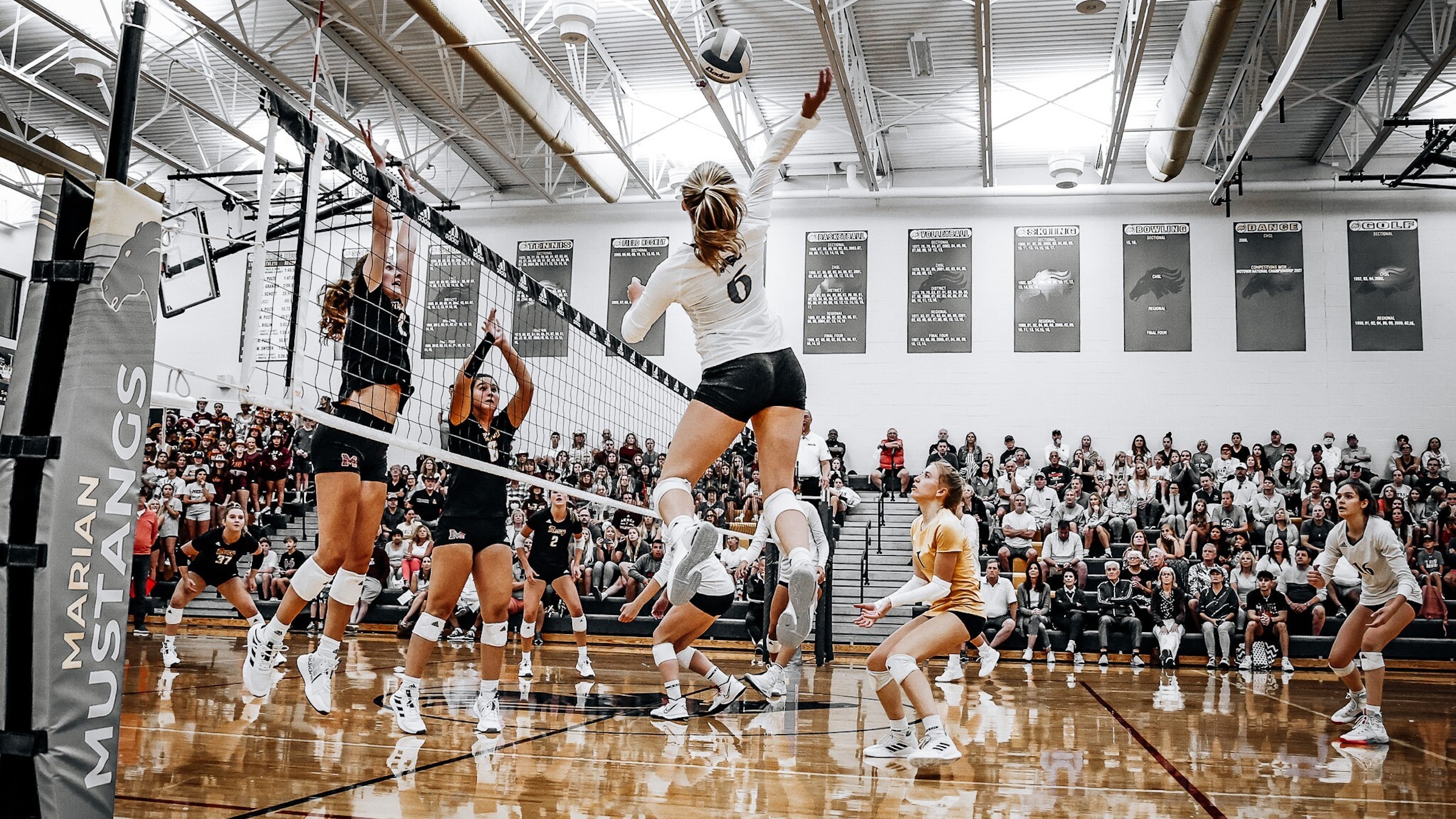 Marian senior outside hitter Molly Banta gets ready to unleash one of her 11 kills in a three-set sweep of Mercy. The Mustangs, state Division champion the last two seasons, are ranked No. 1 in a pre-season nationwide poll and in a poll of Michigan high school volleyball coaches. (Courtesy of Leon Halip Photography)

BLOOMFIELD HILLS — Marian’s volleyball team is starting a new season right where it left off last year — ranked No. 1.

For the last two seasons, Marian has dominated the prep volleyball scene in Michigan and gained national attention by winning back-to-back Division 1 championships.

“We have targets on our backs,” coach Mayssa Cook said recently before Marian took the floor against archrival Farmington Hills Mercy in an early-season Catholic League Central Division showdown.

“It’s nice," Cook said. "We know we’re a top five team and everybody will be playing their best game against us. We welcome that. It’ll make us better.”

With the departure of “four big contributors” — Miss Volleyball Ava Brizard, Janiah Jones, Sophie Treder and Sarah Sylvester — Cook will be counting on leadership coming off the bench but with not as much on-court experience.

Heading into the Labor Day weekend, Marian (13-0; 30-3 sets) is formulating a new cast of contributors led by senior All Americans Ava Sarafa (committed to Kentucky) and Ella Schomer (Wofford College). In the all-important setters position, distributing the ball to attackers, Sarafa has directed the offense with 265 assists (en route to a fourth year of 1,000-plus), setting up sophomore Izzy Busignani’s 108 kills, Schomer’s 101, and 68 by senior Molly Banta. 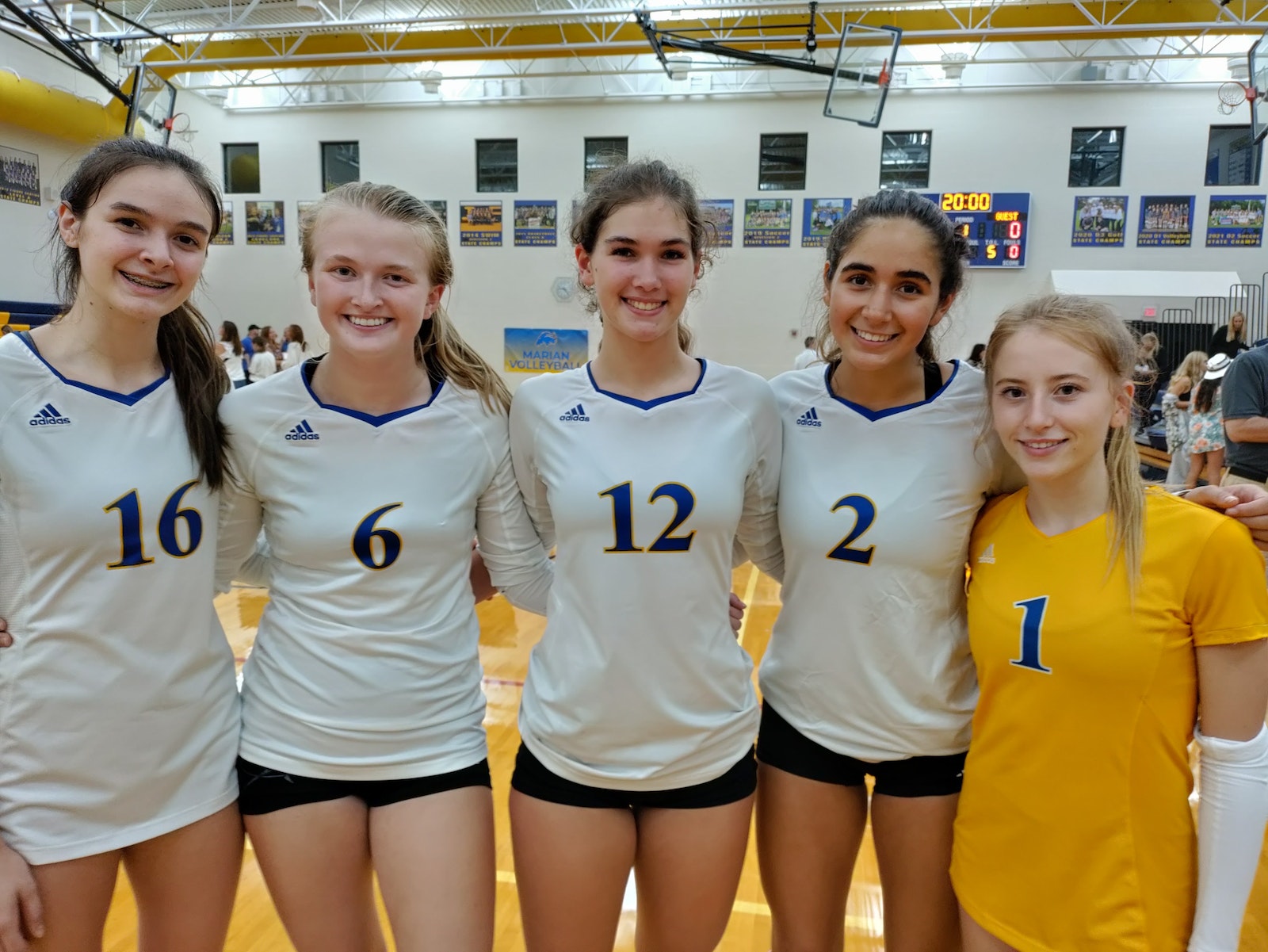 With the departure of four key players for Marian’s success last year, these five have stepped up in the early-season schedule to get the Mustangs off to a winning start: sophomore Izzy Busignani (left), senior Molly Banta, senior Ella Schomer, senior Ava Sarafa and senior Lauren Heming. (Don Horkey | Special to Detroit Catholic)

In her pre-game comments, Marlins coach Loretta Vogel — in her 46th year, 13th at Mercy — said, “Our success will be dictated by senior Erin Kline and sophomore Campbell Flynn” in their roles as setters.

“We have only four seniors,” Vogel said, “but some very talented underclass girls.” One of them is sophomore softball hurler Kaitlyn Pallozzi, who struck out all 21 batters in a perfect no-hitter last spring. “She’s the real deal.”

“We’re fortunate to be a top 10 team every year,” Vogel said. “So we’ll be looking to see what works, what adjustments to make to be successful.”

Marian has won the league and state titles the last two years. They will clash again Sept. 28.

Noteworthy: Jess Mruzek, Miss Volleyball who led Mercy’s domination in volleyball and the 2019 state championship, is a junior volleyballer at Michigan. She has been named to the Big Ten Pre-season All-Conference team.

Other rankings: Mercy is No. 6 in Division 1. Pontiac Notre Dame Prep, defending Division 2 champ, is No. 4; Warren Regina in D2 is No. 12; in Division 3, defending champ Monroe St. Mary Catholic Central is No. 1, Royal Oak Shrine No. 10 and Riverview Gabriel Richard No. 12.