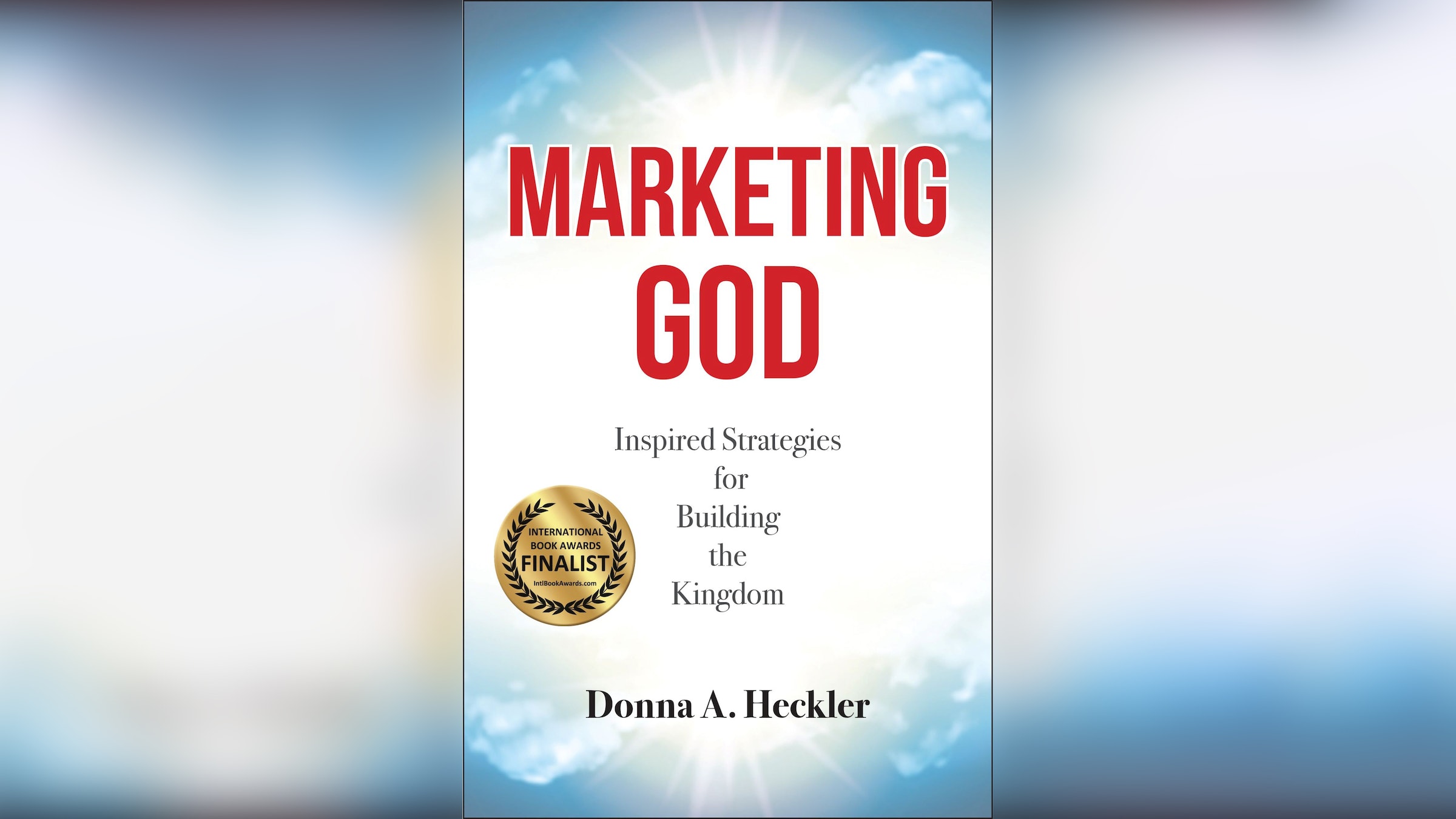 This is the cover of author Donna A. Heckler's book "Marketing God: Inspired Strategies for Building the Kingdom," published in 2019 and considered a crash course in corporate strategies critical for faith-based organizations. (CNS photo/courtesy Our Sunday Visitor)

WASHINGTON (CNS) -- How do you market somebody you can't even take a lunch with?

Fortunately, if you remember the Baltimore Catechism, there's no need for lunch since God, after all, is "everywhere.”

But another issue persists in religious circles. How do you advertise God, and your church, without coming off like some kind of huckster? Talk about a camel passing through the eye of a needle!

Some take umbrage to "the idea of marketing God," but "the point of marketing is to help create loyalty, and we need to create people who are more and more loyal to God," said Donna A. Heckler, who has written a book called "Marketing God: Inspired Strategies for Building the Kingdom," published by Our Sunday Visitor.

Heckler, who was long the brand manager for Energizer batteries -- think "bunny" -- shares in the book some secrets from the world of brand marketing on how to get people to join your church and your parish, and to keep them there.

"You have to be precise in your promise and you have to consistently say it over and over and over again," Heckler told Catholic News Service in a July 21 phone interview from Venice, Florida, where she now advises a handful of parishes, as well as Ave Maria Law School, on marketing matters.

But what's this about a promise? "Instead of the word 'brand,' which is what we say (in the marketing milieu), we would use 'promise,'" she replied. "What do we say? What's your promise? Make it compelling, make it simple.”

Snazzy slogans are one thing, but Heckler said she looks for three things in a marketing campaign.

"It has to be meaningful" to the person you're trying to reach, she said. "It's got to be motivating. And it has to be relevant in their lives. If you talk about the thing that's not meaningful to them or relevant to them, it's not going to motivate them." The kiss of death in marketing, according to Heckler, is that "you don't want to put something out there and not have anybody do anything about it.”

How long should a parish stick with its marketing plan? "One of the challenges that we see in marketing in general," she said, is that "those who work in a company or those who work in a parish get tired of the message far earlier than anyone. So they shift from message to message," diluting its impact.

"If you can identify a core promise. The core promise of what you do and how you're going to risk them with that, and you use God well and consistently over several years, these messages will build on each other," she said.

"Most people are so busy they don't really pay attention to these messages," she added. "If you put something in the bulletin one day and you don't mention it again for three months, it's in one ear and out the other.”

Parishes need a campaign that lasts several years "because it's now permeating their consciousness," Heckler said.

There is a path to creating brand loyalty, even when that brand is God, according to Heckler.

Heckler didn't even need to have lunch with God to come up with the idea for "Marketing God." It was just the power of prayer.

"After Mass, you always say the rosary. After saying the rosary, this thought came to me: 'If you can make people loyal to batteries, why can't you make them loyal to me?'”

Heckler said, "We can bring some things if we removed the veneer of money, money, money" that deters many suspicious people from considering God, equating it with a cash grab by the clergy. In fact, she added, "to me, marketing is possible without the enormous expenditure" common in today's advertising campaigns.

"Where do you start? For me, you start at the smallest common denominator, and I see that as the parish. It may be in a particular (parish) ministry," Heckler told CNS.

"Marketing starts with understanding a few things. One is understanding what your target audience is. If we don't understand who the parishioner is," she said, "it's going to be difficult to engage with them. Loyalty begins at the parish. We would ultimately see, down the road, all the parishes are going to ladder up, ultimately, to God.”

Heckler acknowledged that marketing is not a typical seminary class. "There's just not a lot of course work and information. But I will also say that because of COVID, there are some universities and some organizations (that can provide marketing education). Are they certificate programs, are there ways we can help our staff be more effective?”

She added, "I'm just one person. The issue is bigger. Our parishes don't know what to do.”

If a pastor understands the need for marketing, "it makes it so much easier," Heckler said. "I will say this is new for parishes. They have not had to think about this before but COVID has forced a reconsideration of we engage.”