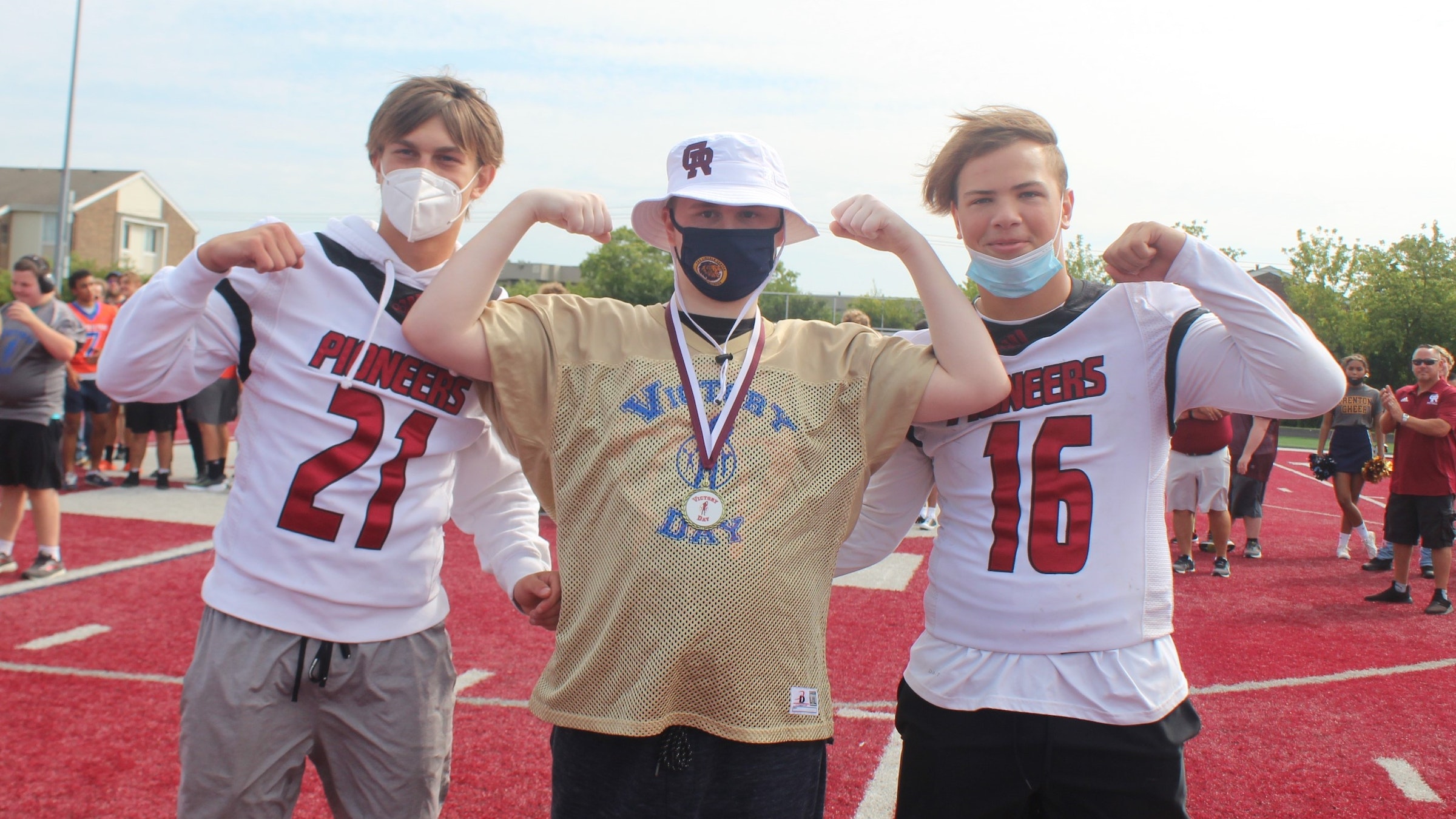 Nick Szczechowski, Jonathon Kilmer and Nick Wisniewski flex at midfield during the “Victory Day” closing ceremony Sept. 11 at Gabriel Richard High School in Riverview. The annual event brings together athletes, coaches and their peers by providing special-needs students an opportunity to become football stars for a day. (Photos by Wright Wilson | Special to Detroit Catholic)

Football players, coaches from Gabriel Richard, Cabrini and other Downriver schools give peers a chance at the Friday night spotlight

RIVERVIEW — It’s possible that Luke Gordon, Nick Szczechowski and the rest of their Gabriel Richard teammates might not approach a football game in the same way ever again — not after helping their newfound friends experience the thrill of victory.

“It’s a really, really fun experience and you wouldn’t expect it to be, but it’s something that everyone should try to go to and see,” said Gordon, a senior safety for the Pioneers. “Our first year was enjoyable. It was very a heart-warming experience, to be honest.”

Gabriel Richard’s football and cheerleading squads — along with 12 other Downriver-area football teams (including Allen Park Cabrini), seven other schools’ cheer squads and the Trenton High School Marching Band — hosted “Victory Day” for about 60 special needs students from the region on Sept. 11.

This was the 12th such event held Downriver. The first 11 were at neighboring Trenton High School, but when the Trojans’ staff came over to coach Gabriel Richard this season, they brought Victory Day with them as well.

“It’s that servant leadership, a way to teach our athletes that it’s more than just sports, more than just football, and to give back. That’s what we did this morning with so many different teams from the area,” Pioneers assistant football coach Aaron Segedi said. “A lot of people behind the scenes made this work. That’s what makes it successful. There’s a lot of helping hands, and that’s why this has continued to spread, not only in Michigan but across the country.”

The students, from Jobrighton Skills Center, the Lincoln Center and Madison Elementary schools in the Wyandotte City School District, got a chance to take in what Segedi called “the full game-day experience” as if they were part of high school football contests on Friday nights.

The participants had their names announced through the loudspeakers as they ran onto the field between a tunnel of cheerleaders and football players. They got to try on the equipment, participate in some football practice blocking drills, throw passes and kick field goals. For many, the biggest highlight was their chance to carry the ball across the goal line for a touchdown as the spectators cheered them on.

“I was just helping the guy who was with me, his name is Gage (Keithley). He liked to play around with the tackle bags and throw the football; he scored a touchdown,” Gordon said. “The best part (for me) was just being able to see kids that aren’t able to do as much as we can be able to have an opportunity to have fun and play football.”

Szczechowski, a senior quarterback, had fun with his partner, Jonathon Kilmer.

“He and I threw the football around, kicked a few field goals, and he got his first touchdown. We got him a cool celebration: we got a few members of the defense out there and he acted like he was bowling the ball and they all fell down. That was pretty cool.”

Kilmer told Szczechowski that football is his favorite sport — and with Victory Day, how could it not be?

“He liked being out here,” Szczechowski said. “He liked listening to the band, he liked the whole atmosphere, he had a good time.”

While the participants received special “Victory Day” jerseys and keepsake medals at the conclusion of the event, the thrill of the morning’s activities extended to the high school participants.

“It’s just fun seeing the kids, and seeing how blessed I am,” Szczechowski said. “Some people aren’t able to do the stuff that I’m able to do, and giving back to them really makes me feel good about myself.”

Segedi said, “My favorite thing about Victory Day is watching the smiles on the faces, and watching the parents just sit back and put it on our hands — because they don’t have that opportunity very much — and let these kids just take in the morning and let them have their Super Bowl, their moment in the sun.”

“It was a blast just to be out here with the kids. It’s a cool experience and it’s something I’ll remember for my whole entire life,” Szczechowski. “One of the best experiences of my life, probably.”