Protecting the unborn fulfills the word of God, archbishop says at pro-life Mass 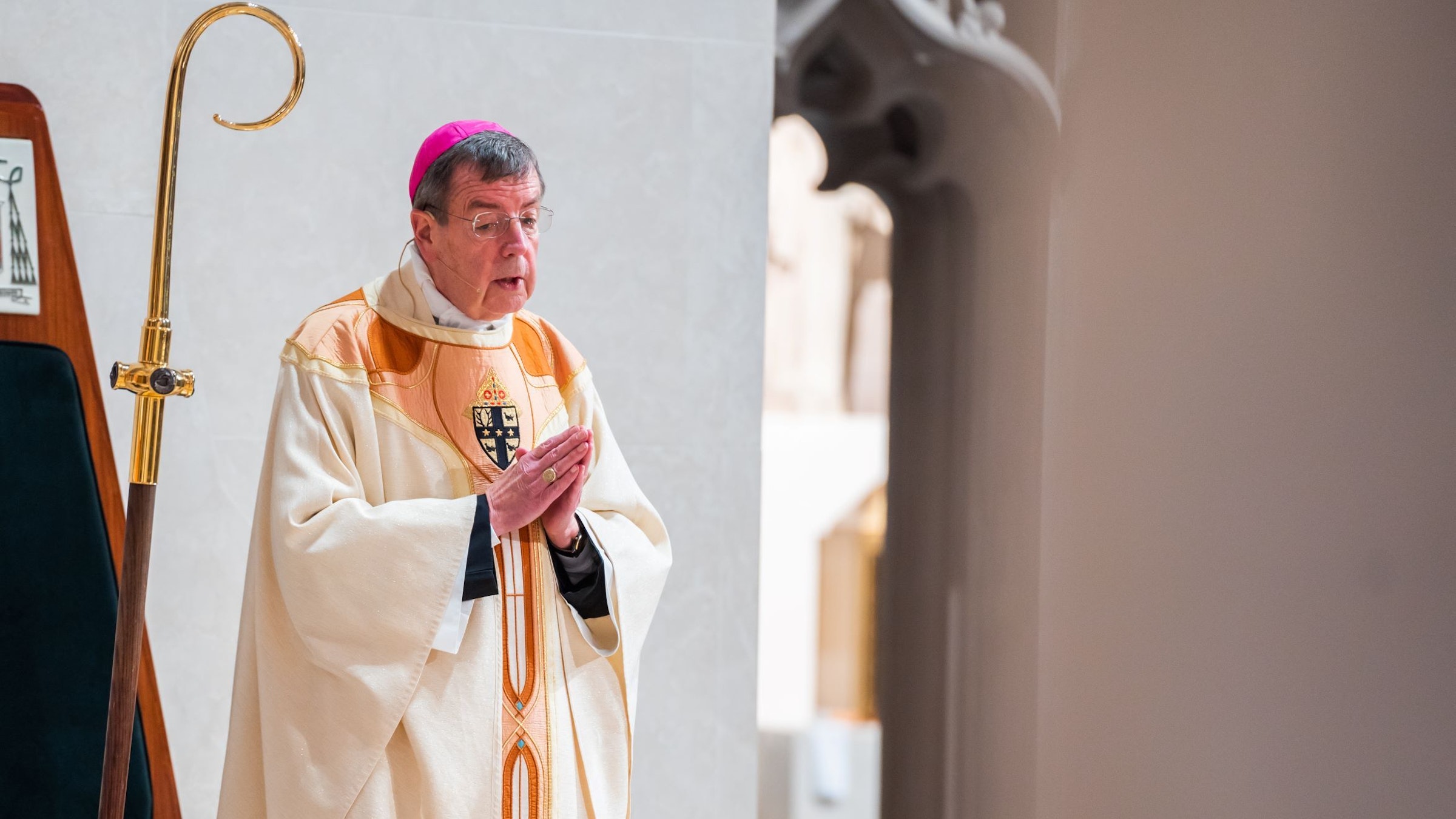 Archbishop Allen H. Vigneron prays during the annual Mass for the Protection of the Unborn at the Cathedral of the Most Blessed Sacrament in Detroit on Jan. 23. The Mass also falls on Word of God Sunday, proclaimed in 2019 by Pope Francis to help the Church focus on God's revelation to His people. (Photos by Valaurian Waller | Detroit Catholic)

On Word of God Sunday, annual Mass for the Protection of the Unborn allows Archdiocese of Detroit to pray for the end of legalized abortion

DETROIT — Pro-life advocates braved the cold and snow Sunday, Jan. 23, to pray for the safety of the most innocent in society during the annual archdiocesan Mass for the Protection of the Unborn at the Cathedral of the Most Blessed Sacrament.

Archbishop Allen H. Vigneron welcomed the faithful to the cathedral to celebrate the Mass, which coincides with the Jan. 21 March for Life in Washington, D.C., but also takes places when the universal Church celebrates Word of God Sunday, the third Sunday of Ordinary Time.

“We must understand we have to rely on God’s word in our efforts; that we take direction from the word of God in our effort to defend the right of life,” Archbishop Vigneron said in his homily. “Our defense of the right to life is based on God’s word and His plan for human flourishment. It’s not the imposition of a political ideology; it’s not a partisan decision. It’s act on the basis of what God has told us about how to be happy in this world and the next.” 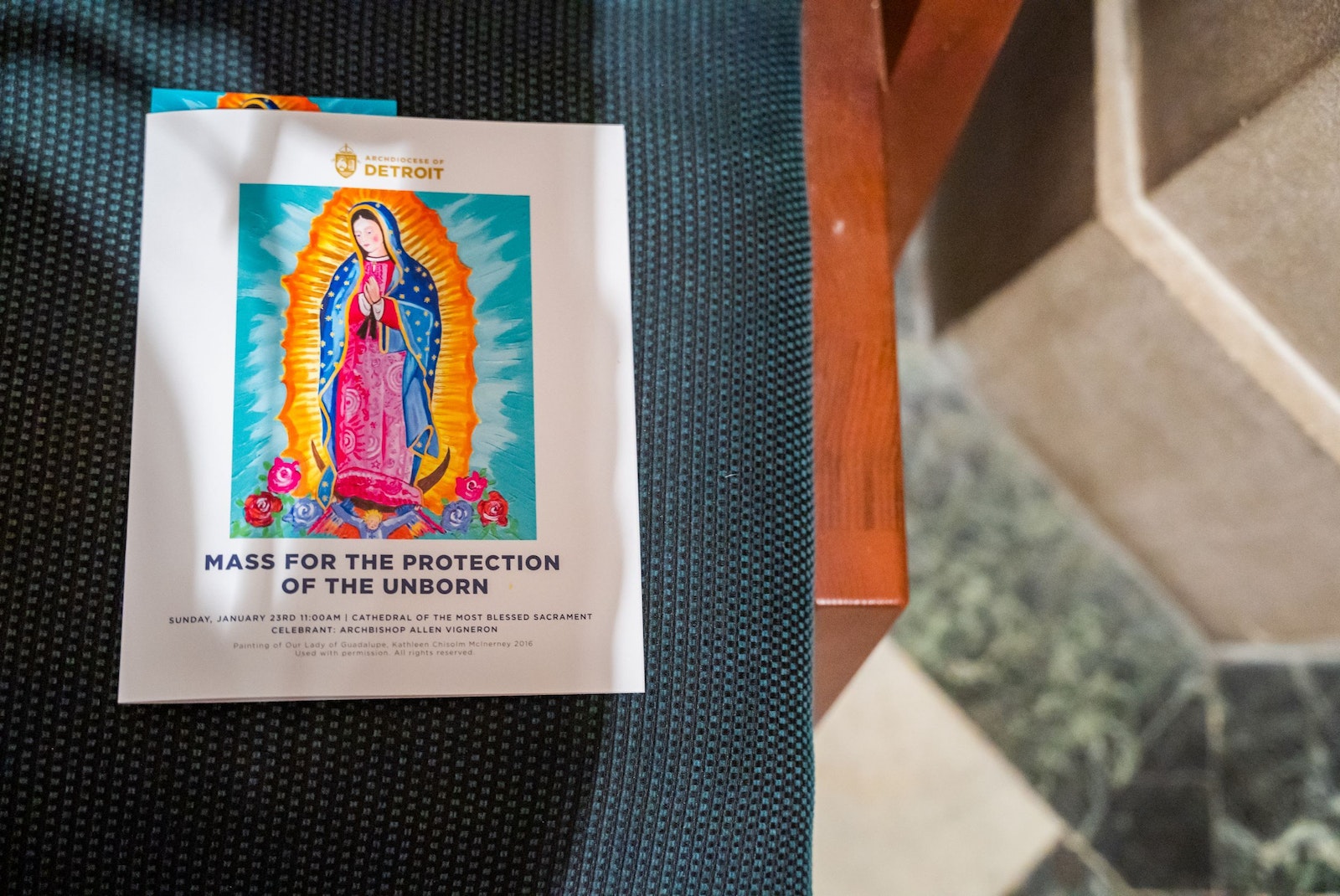 A Mass booklet is pictured for the Mass for the Protection of the Unborn at the Cathedral of the Most Blessed Sacrament. After Communion, Archbishop Vigneron led the congregation in praying to Our Lady of Guadalupe, patroness of the unborn.

Commenting on the Gospel of Luke, where Jesus preaches in the synagogue in Nazareth, Archbishop Vigneron said the work pro-lifers undertake is fulfilling the God's eternal word.

The word of God has guided His people throughout history, from the time of Abraham and the Babylonian exile to modern days, in which thousands march annually in the nation's capital, the archbishop said.

Marguerite Lampertius, a member of St. Owen Parish in Bloomfield Hills, attended the Mass with her adopted teenage daughter, Ana, to give witness to life in Detroit since the pair couldn’t make it to Washington this year.

“It was God’s word that inspired my husband and I to adopt," Lampertius told Detroit Catholic. "So for people who are considering adoption, go to the word of God and ask for the inspiration of the Holy Spirit to give you courage.” 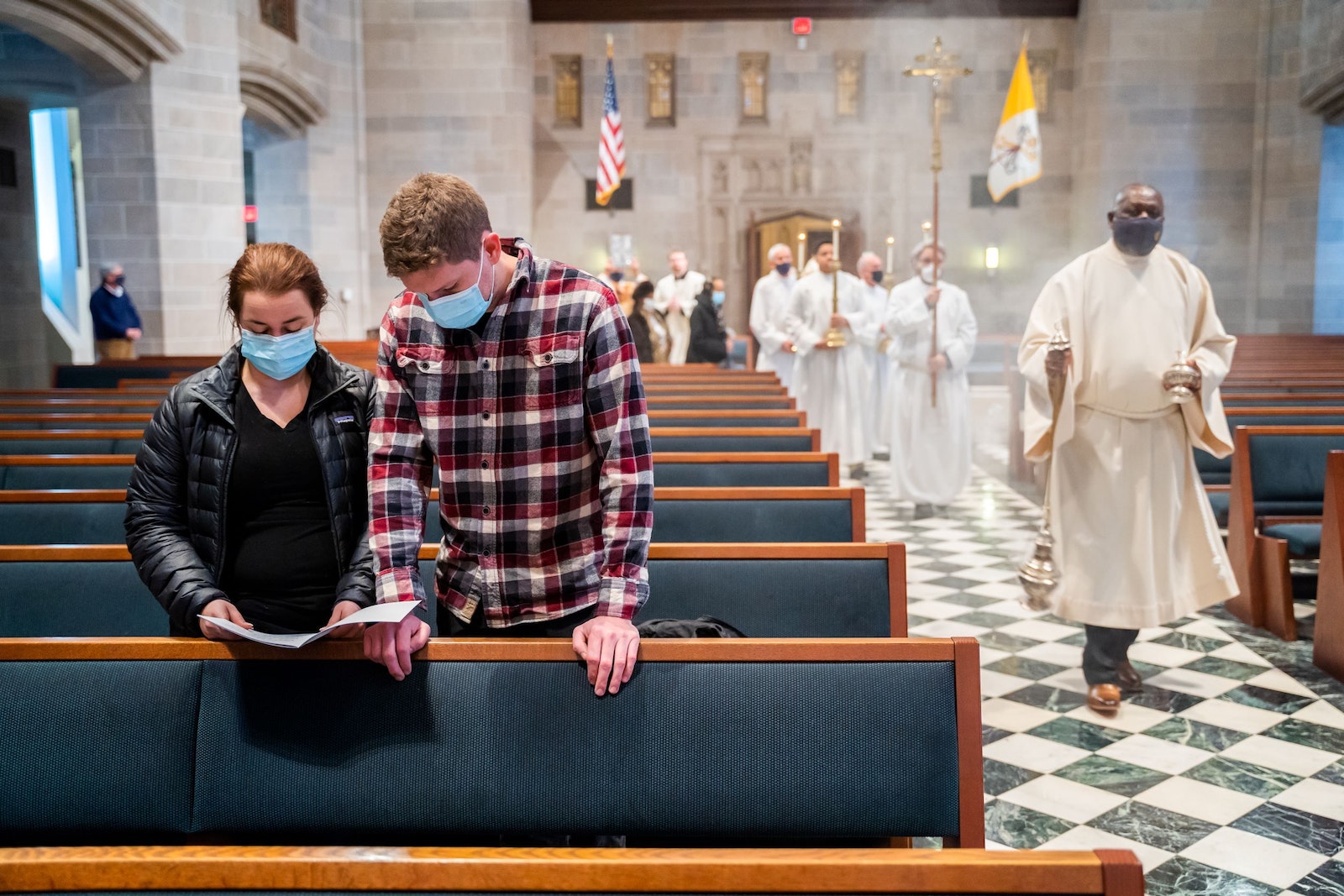 Although attendance was sparse this year because of the ongoing COVID-19 pandemic, Archbishop Vigneron addressed those watching via livestream, as well as those who attended the March for Life this year in Washington, D.C.

Lampertius and her husband adopted four children from Guatemala, giving the family a unique perspective to bring to the pro-life movement, that of children born to mothers who choose life, and parents who accepted life into their families.

“Adoption is still a choice; it’s not extinct or something people used to do,” Ana Lampertius said. “Personally, I don’t know if I want to get married and go through a pregnancy, but I want to adopt. I was adopted, so I want to have children who have gone through what I’ve gone through, just to show that adoption is a wonderful thing. There is always a family who will lovingly take in your child and love them.”

Marguerite Lampertius added the bond she shares with her children "is really beautiful."

“I feel like they (her four children) have adopted us, as we have adopted them," she said. "It’s a beautiful, loving relationship that’s not perfect; like all families you’re working through brokenness. But there is so much grace that pours in. I think of the Holy Family, St. Joseph being a foster father, an adoptive father, as a beautiful role model for adopted families.”

This year’s March for Life comes at a time when the U.S. Supreme Court is considering a case that could overturn the 1973 Roe v. Wade decision. At the same time, a recent petition drive seeks to overturn Michigan's century-old law prohibiting abortion, should that ruling take place. 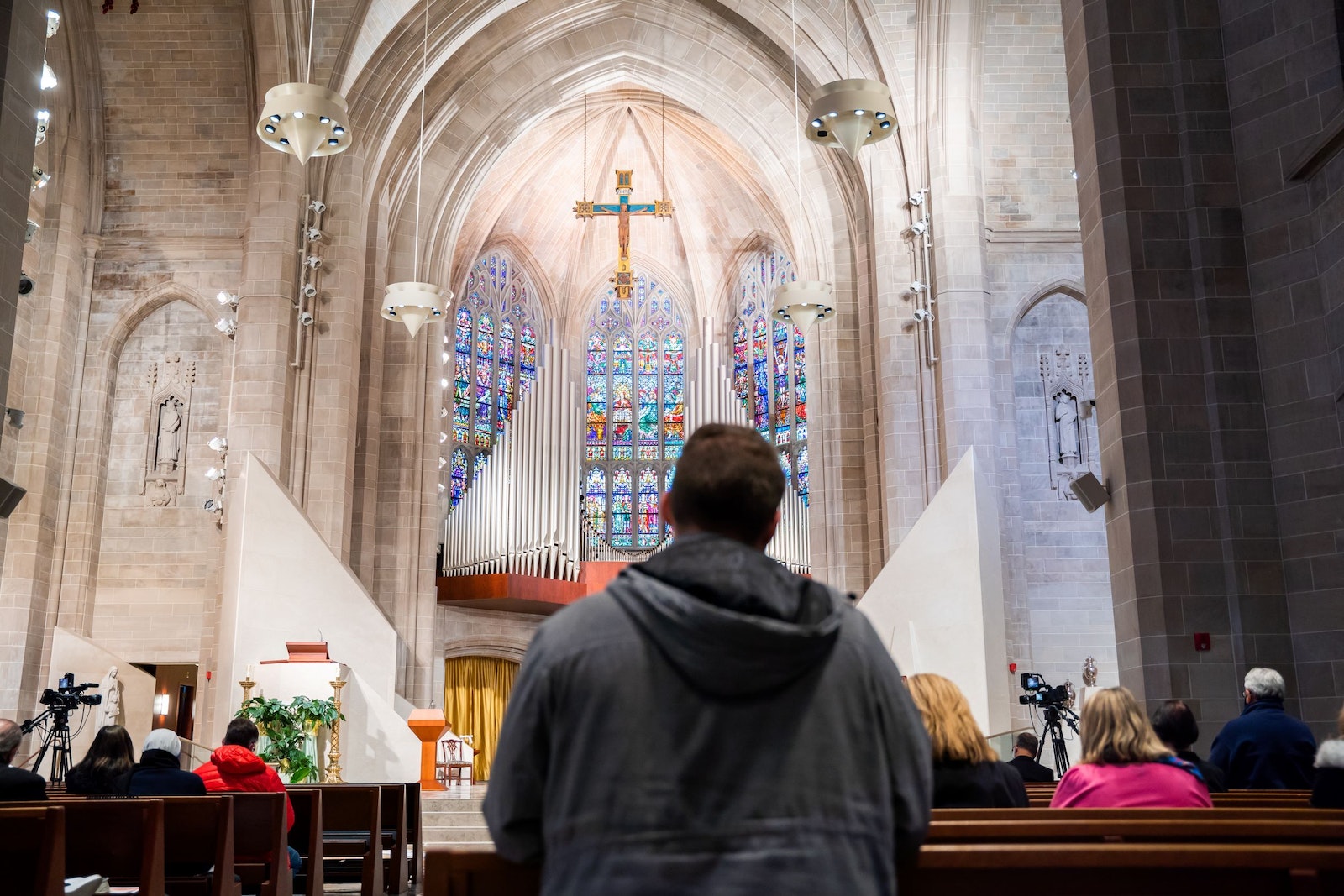 A man gazes up to the expansive stained-glass windows of the Cathedral of the Most Blessed Sacrament during the Mass for the Protection of the Unborn on Jan. 23.

The ebbs and flows of the political situation can at times feels exhausting — even disheartening — for pro-life advocates, but Archbishop Vigneron encouraged the faithful not to lose heart, because the mission comes from God’s word, and will be completed on God’s time.

“God’s word leaves us a path to build up a healthy human society,” Archbishop Vigneron said. “God’s word offers healing for the wounds afflicted by legalized abortion. God’s word gives us — it gives me — renewed courage because His word is efficacious. Perhaps it's not according to the timetable we might imagine is appropriate. Sometimes, we have to wait in patience for God to act. But God will act. He will do what He says.”

After Communion, the faithful prayed to the Virgin of Guadalupe, patroness of unborn children, for the United States and all Americans to embrace a culture of life and mercy that can heal the many divisions the country faces.

“Don’t lose heart, ever," the archbishop said. "Despite the challenges we face, God’s word is omnipotent, all powerful, and He will, according to His plan, through whatever work we’re able to offer, accomplish His plan to remake the world as He intends.”