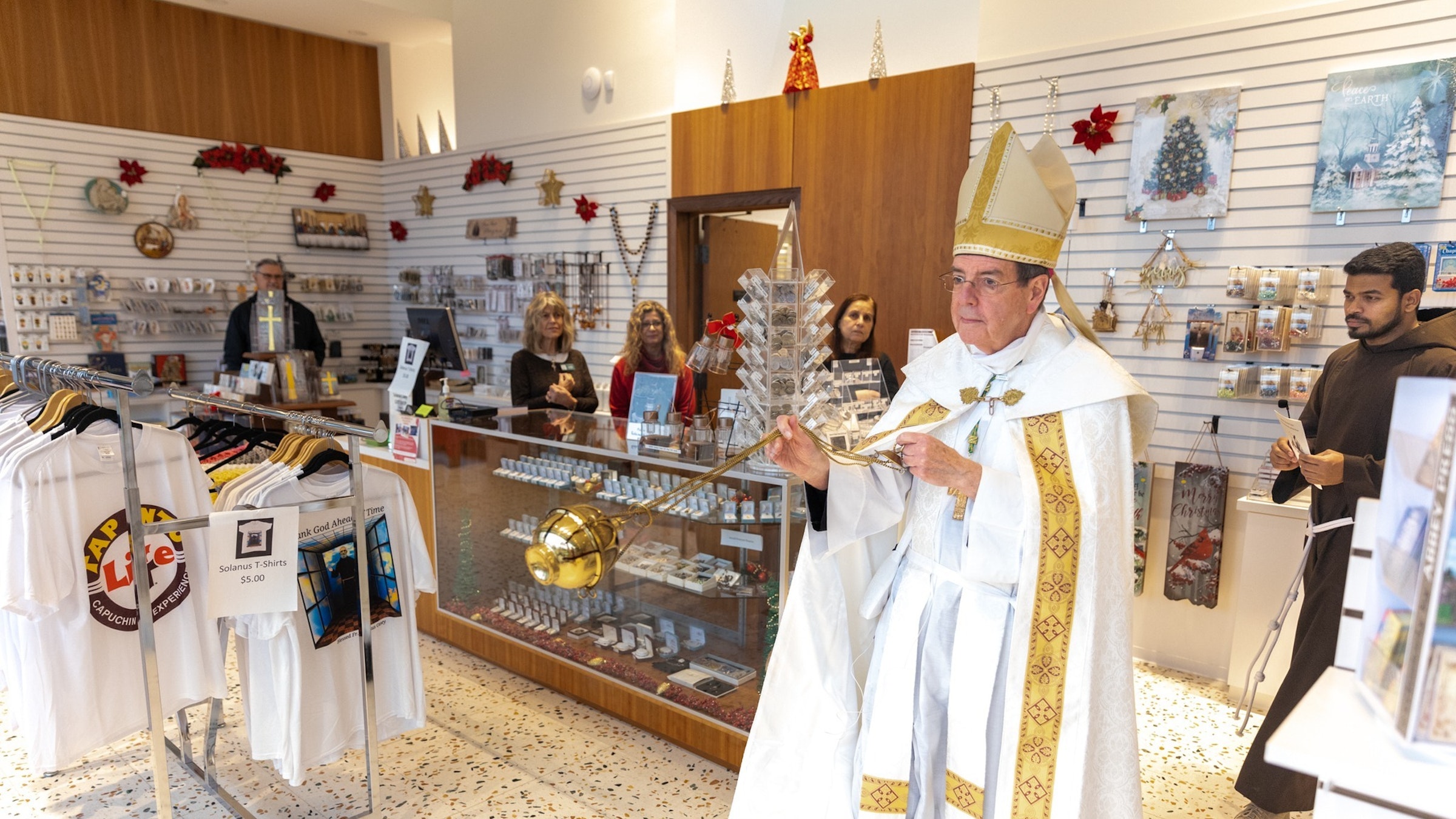 DETROIT — For two decades, Detroit’s near east side has hosted a place of spiritual refuge and pilgrimage for thousands, dedicated to the life and legacy of the city’s first beatified saint.

Since Blessed Solanus Casey was beatified on Nov. 17, 2017, the Solanus Casey Center has seen an influx of pilgrims from far and wide. Before the pandemic, the center received more than 100,000 pilgrims annually, including many from out of state, drawn to Blessed Solanus’ life of healing, compassion for the poor and a listening ear.

“We recognize that Fr. Solanus was an echo of Christ’s own compassionate love for the little ones,” Archbishop Vigneron told nearly 100 people gathered in the chapel of St. Bonaventure Monastery. “We hear in our Lord’s word, he says, ‘Come to me all you who labor and are burdened, and I will give you rest.’ … Certainly Blessed Solanus echoed and was a representation of these sentiments in the heard of the Lord Jesus.” 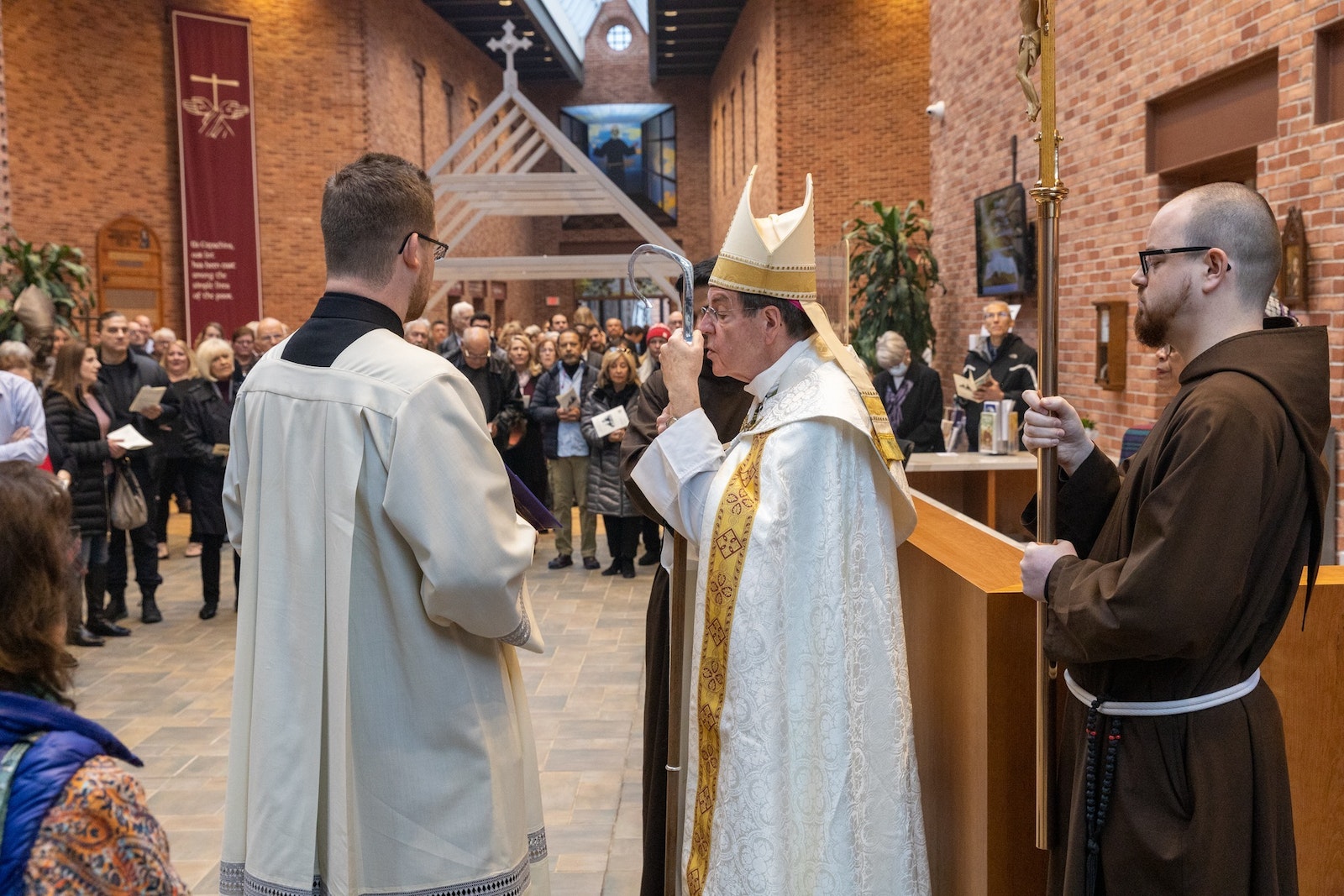 Archbishop Vigneron prays a blessing at the reception desk of the newly renovated Solanus Casey Center in Detroit on Dec. 3. The archbishop joined the Capuchin Franciscan Province of St. Joseph in dedicating a new 5,000-square-foot expansion, in addition to renovations to the center's existing facilities.

Shortly after the beatification, the center announced a $20 million gift from the A.A. Van Elslander Foundation, the philanthropic organization of late Art Van Furniture founder Art Van Elslander, to support the center’s expansion. Van Elslander cited the influence of the Capuchins, and Blessed Solanus in particular, as key to his faith life growing up.

In June, the center unveiled a new 5,000-square-foot addition, which includes a new space for confessions — which the Capuchins offer six days a week — as well as a new gift shop and café hosted by On the Rise Bakery, a Capuchin ministry that helps formerly incarcerated individuals get back on their feet.

The Solanus Casey Center also features an interactive exhibit where pilgrims can learn about Blessed Solanus’ life and ministry, spaces for meetings, conferences and workshops, and Blessed Solanus’ tomb, where pilgrims leave daily prayer intentions. On Sundays and Wednesdays, the center hosts a special Blessing of the Sick service with a relic of the True Cross.

Known in life and after death as a conduit of God’s miraculous healing, Blessed Solanus became known for two axioms which he often repeated, Archbishop Vigneron said: “Blessed be God in all His designs,” and “Thank God ahead of time.” 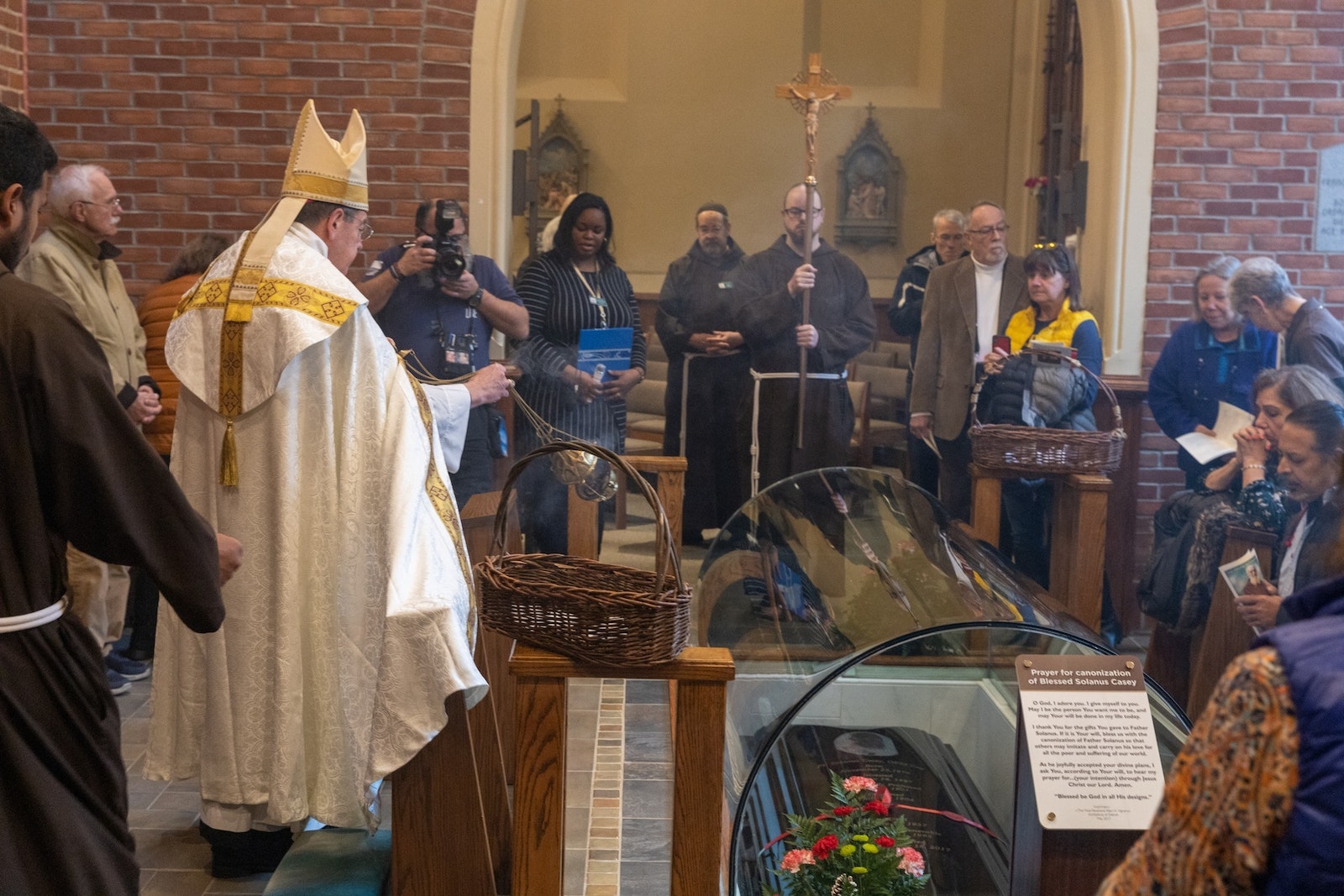 Archbishop Vigneron blesses the tomb of Blessed Solanus Casey during a celebration of the Solanus Casey Center's 20th anniversary Dec. 3.

While thousands came to him for hope and healing, not all received a miracle, the archbishop said. But what all did receive was a reminder of God’s all-powerful and everlasting love.

“By these axioms, we understand that his life and ministry as a friar was always rooted in hope, rooted in a confidence that God doesn’t lie. God always keeps his promises,” Archbishop Vigneron said. “He always can be relied upon, appearances even to the contrary — even when the baby is sick, or even when the baby dies. Blessed be God in all His designs because His designs, however mysterious, are always filled with the promise of eternal beatitude for us.”

In June, Fr. Steven Kropp, OFM Cap., told Detroit Catholic the center’s new layout is designed to lead visitors on a spiritual journey, starting with prayer and ending with community and fellowship. 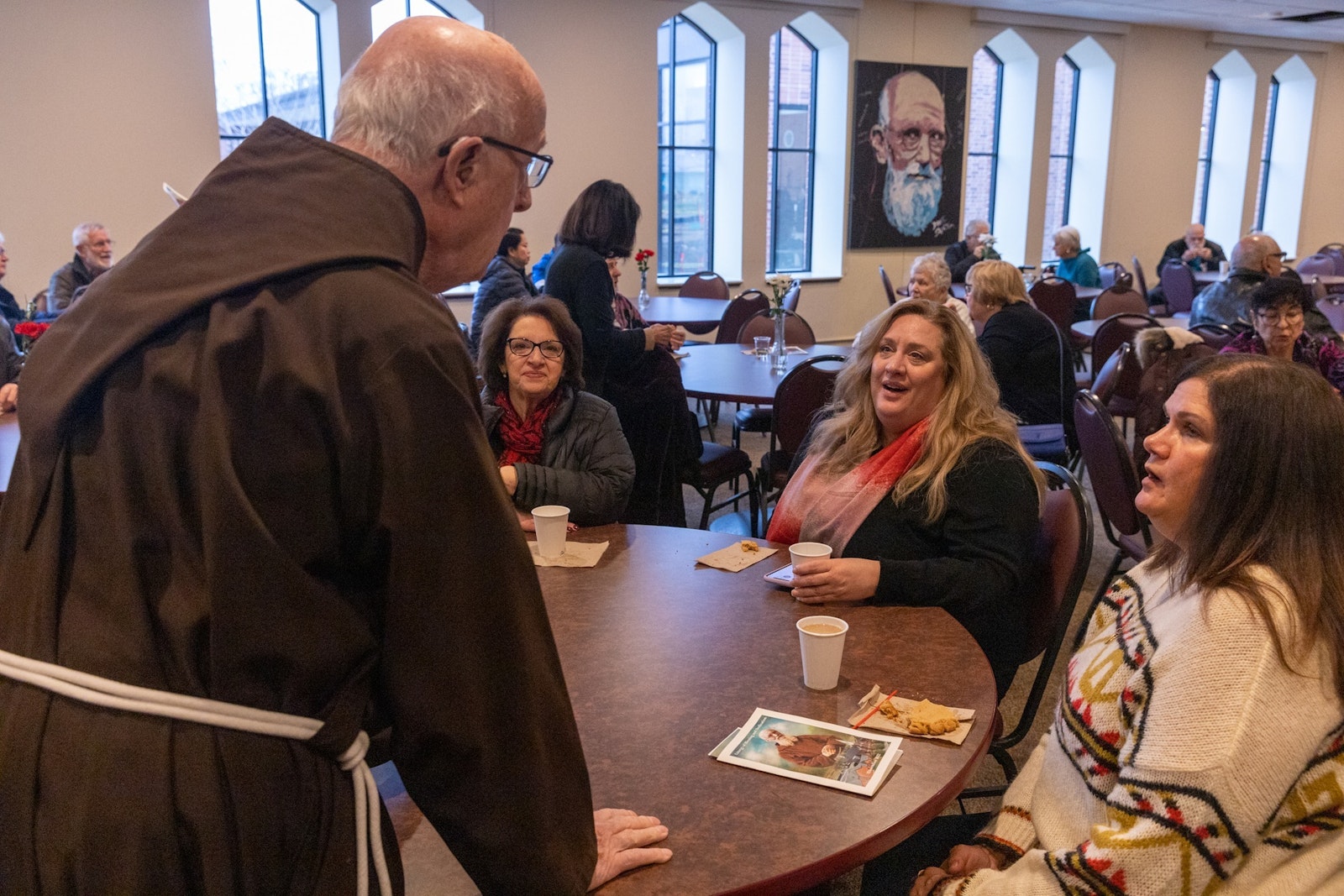 Fr. Dan Crosby, OFM Cap., who lived with Blessed Solanus for a year as a young Capuchin in the 1950s, talks with well-wishers Dec. 3 in the Solanus Casey Center's meeting space.

“Visitors will see how the gift shop and café really reflect the flow of the center,” said Fr. Kropp, director of the Solanus Casey Center. “People will see a new front desk, expanded to accommodate more of the visitors who are coming in. We’ll have meeting spaces made available for parishes and other organizations who are on retreat at the center and can meet in those rooms before continuing on to the rest of the center.”

With more meeting space available, Fr. Kropp said the hope is for pilgrimage groups to be able to take advantage of the new amenities to incorporate time for fellowship, in addition to prayer.

“Solanus Casey was all about hospitality and gratitude,” said Fr. Gary Wegner, OFM Cap., executive director of the Capuchin Soup Kitchen. “I think those are two of his primary virtues. He welcomed people, he was the porter. In that role, he provided sandwiches to those who had material needs. With the café, we’re providing sandwiches and coffee for those who come with a spiritual need but still need to eat something.”

The center’s expansion will also include a new outdoor garden and prayer space, which is expected to be completed by this spring. 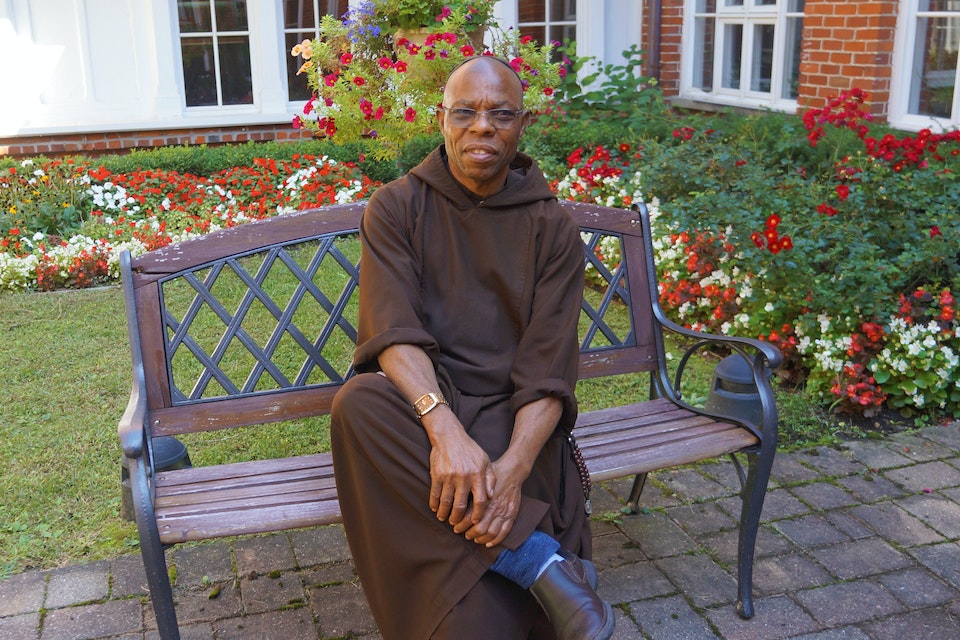 After oil spills devastated his homeland, Capuchin seeks to build an orphanage 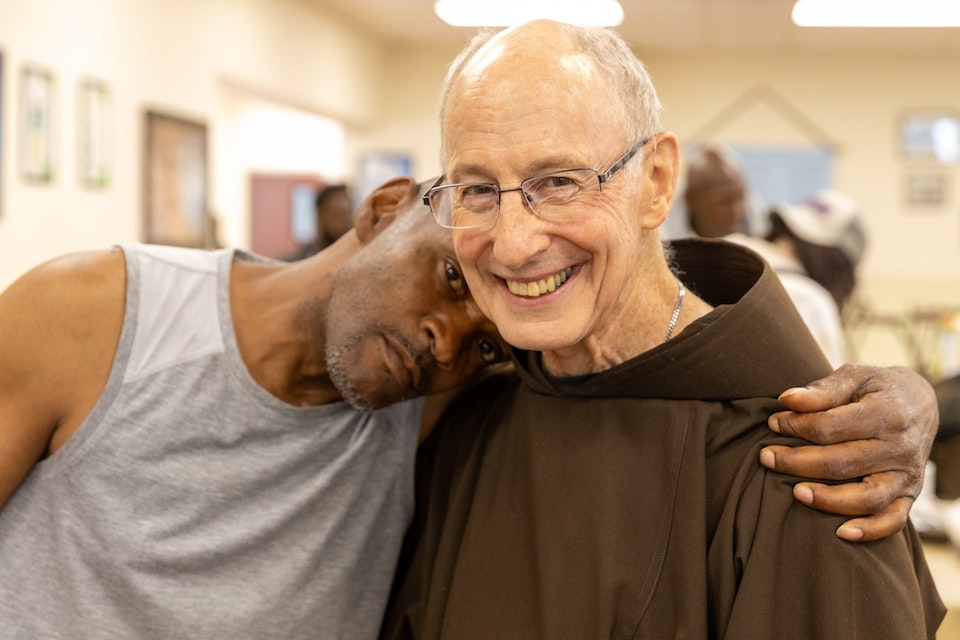