As prayers pour in, Oxford rebuilding 'the crumbled edifice of our hearts,' priest says 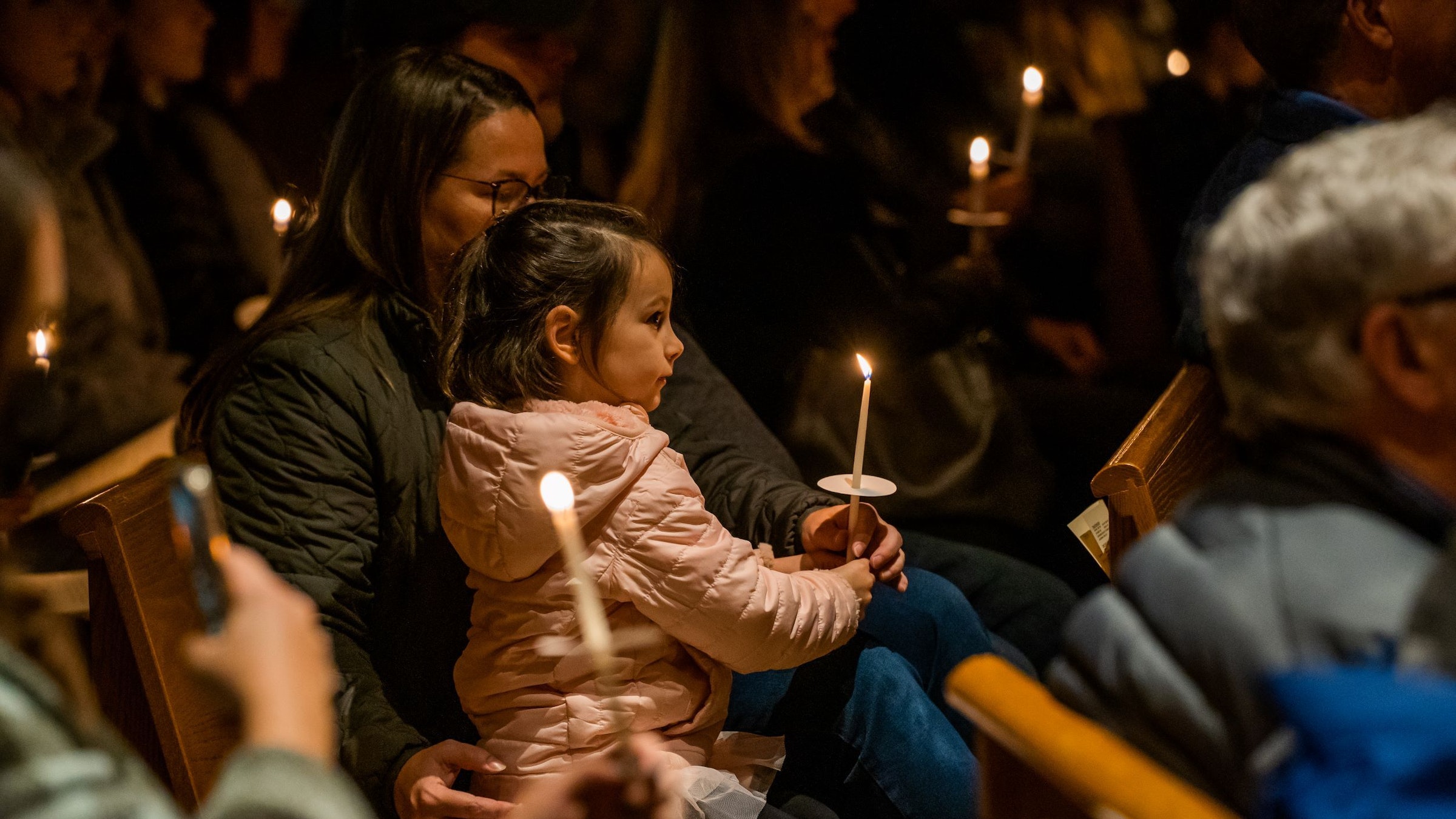 A young girl holds a candle during a Christmas concert and memorial vigil for victims of the Oxford High School shooting Dec. 5 at St. Joseph Parish in Lake Orion. (Valaurian Waller | Detroit Catholic)

Memorials for shooting victims touch on faith, hope and resiliency of community as Church proclaims message of Advent: 'God is with us'

LAKE ORION — There were four white candles, each tied with blue-and-gold ribbons, alight in the darkness on the baptismal font at St. Joseph Parish on Dec. 5.

One for Hana St. Juliana. One for Justin Shilling. One for Tate Myre. One for Madisyn Baldwin.

There were no words that could give comfort to those suffering. But perhaps, in the silence of the second Sunday of Advent, the Lord could instill some healing. 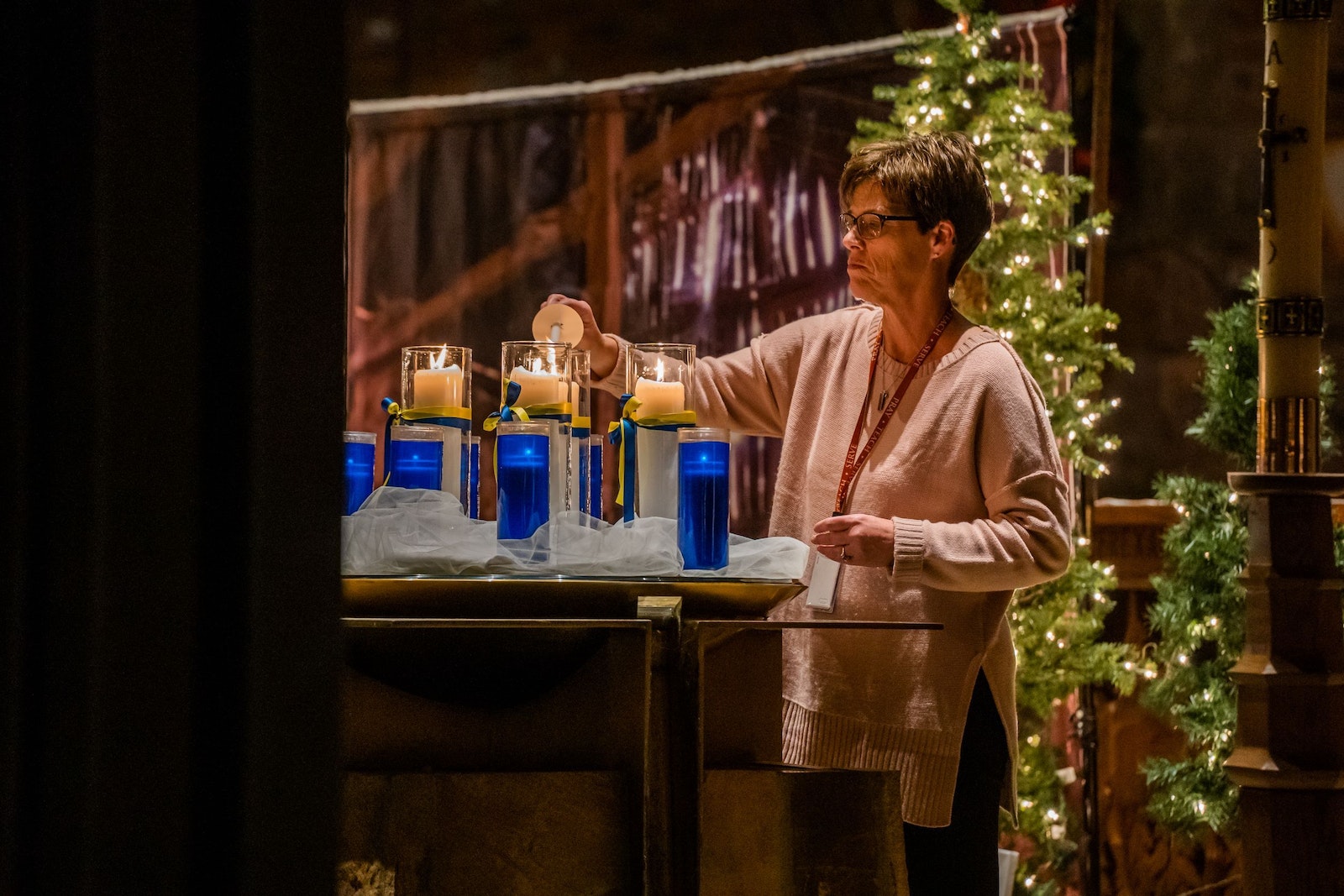 A woman lights a series of candles representing the 11 victims of the Oxford tragedy — four of whom died — during a memorial at St. Joseph Parish in Lake Orion. The parish was among several churches in the area who paid tribute to those lost and offered prayers for victims' families. (Valaurian Waller | Detroit Catholic)

“We recognize that so many of us are tending to the emotional wounds of the trauma that is still there,” said Fr. Jim Kean, pastor of St. Joseph, during the start of an emotional Christmas concert and memorial service at the parish Sunday evening, attended by many of those in the nearby Oxford community.

In the darkness of the church, Fr. Kean noted the symbolism of the candles held by the parish’s young people, which would soon spread light to the rest of the church.

“You see the light grow and fill this place, and it is a good reminder to us,” Fr. Kean said. “Though we saw one horrific action of awful means, we see thousands of actions of heroism, thousands of actions of light. We know that all of our actions tonight build up that process of healing, mindful that we’re not doing this alone.”

The concert and memorial at St. Joseph was one of several held in the communities of Oxford and Lake Orion in the aftermath of the worst school tragedy in Michigan’s history. Another vigil took place at Christ the Redeemer Parish, at the south end of Lake Orion, as well as in churches of all denominations throughout the region. 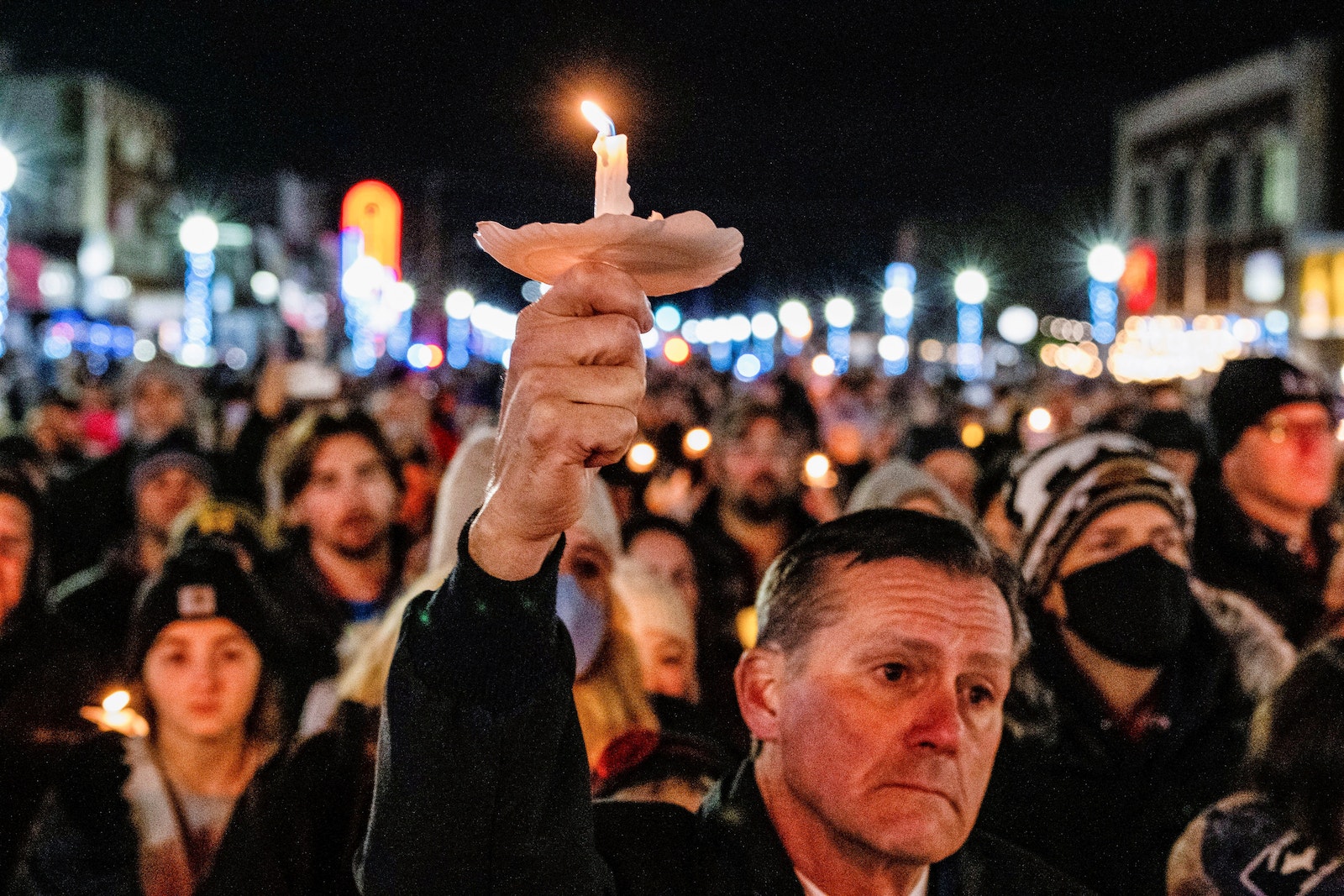 People in Oxford, Mich., gather for a vigil Dec. 3, 2021, to remember the students killed in a mass shooting at Oxford High School. (CNS photo/Seth Herald, Reuters)

On Dec. 3, more than 5,000 people — including Michigan’s governor, congressional representatives and clergy of all stripes — held candles in downtown Oxford to remember the victims and to vow that the tragedy would not define the humble community, previously known as the “gravel capital of the world” and the home of the original Lone Ranger.

Though Oxford’s name may be more recognizable because of the events of Nov. 30, residents vowed they would rise above the tragedy.

“We know that there’s therapy in the midst of being a healthy community,” Fr. Kean said in an interview with Detroit Catholic. “We’re rebuilding, brick by brick, this crumbled edifice of our hearts. That takes time.”

Of the seven wounded victims, all but one had been released from the hospital as of Dec. 6, although the emotional and psychological wounds will take much longer to heal, Fr. Kean said. Although not a St. Joseph parishioner, one of those who died, Myre, played football for St. Joseph’s CYO team, Fr. Kean said, and left an unmistakable mark upon the community.

“Many of his friends are from St. Joseph,” Fr. Kean said. “I’ve talked with some of those families, and the kids are really coping with the fact that they lost such a good friend.” 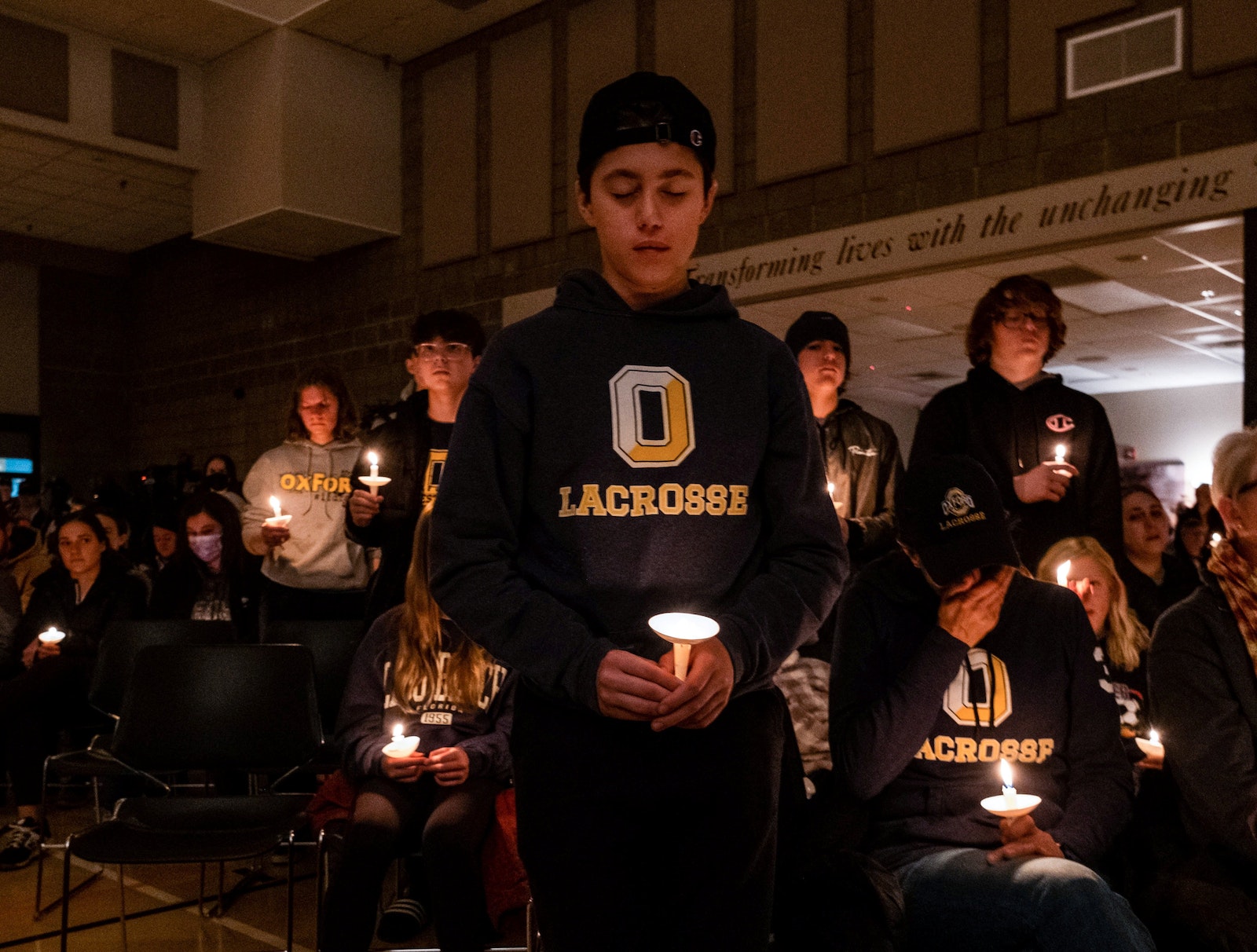 High school students stand during a prayer vigil at Lake Point Community Church in Oxford, Mich., Nov. 30, 2021. A 15-year-old student opened fire at his high school in Oxford, killing three students and wounding eight others. The suspect, who was not named, was taken into custody without incident, police said. (CNS photo/Seth Herald, Reuters)

Over the weekend, victories by the University of Michigan’s football team — which honored Myre’s family at midfield for the opening coin toss — and the Detroit Lions — who dedicated the game ball to the Oxford community — offered what small consolation they could. But both teams acknowledged it could never be close to enough.

Celebrating Mass at St. Joseph on Dec. 5, Detroit Auxiliary Bishop Arturo Cepeda commended the victims to the merciful love of God, urging the community to embrace those who suffer, just as Jesus does.

“As we prepare the way (of Advent), we must never forget who we are,” Bishop Cepeda said. “We must never, ever forget that we are here to reach out to those in need. We are a people of hope, the hope that brings about the presence of God in our lives: Emmanuel, God with us.”

As Bishop Cepeda officially installed Fr. Kean as pastor of St. Joseph — a ceremony that had been planned a month in advance — he recalled the parish’s compassionate hospitality just a few days prior, with clergy and parishioners welcoming nearly 1,000 students, parents and community members for a Mass of healing just hours after the shooting took place. 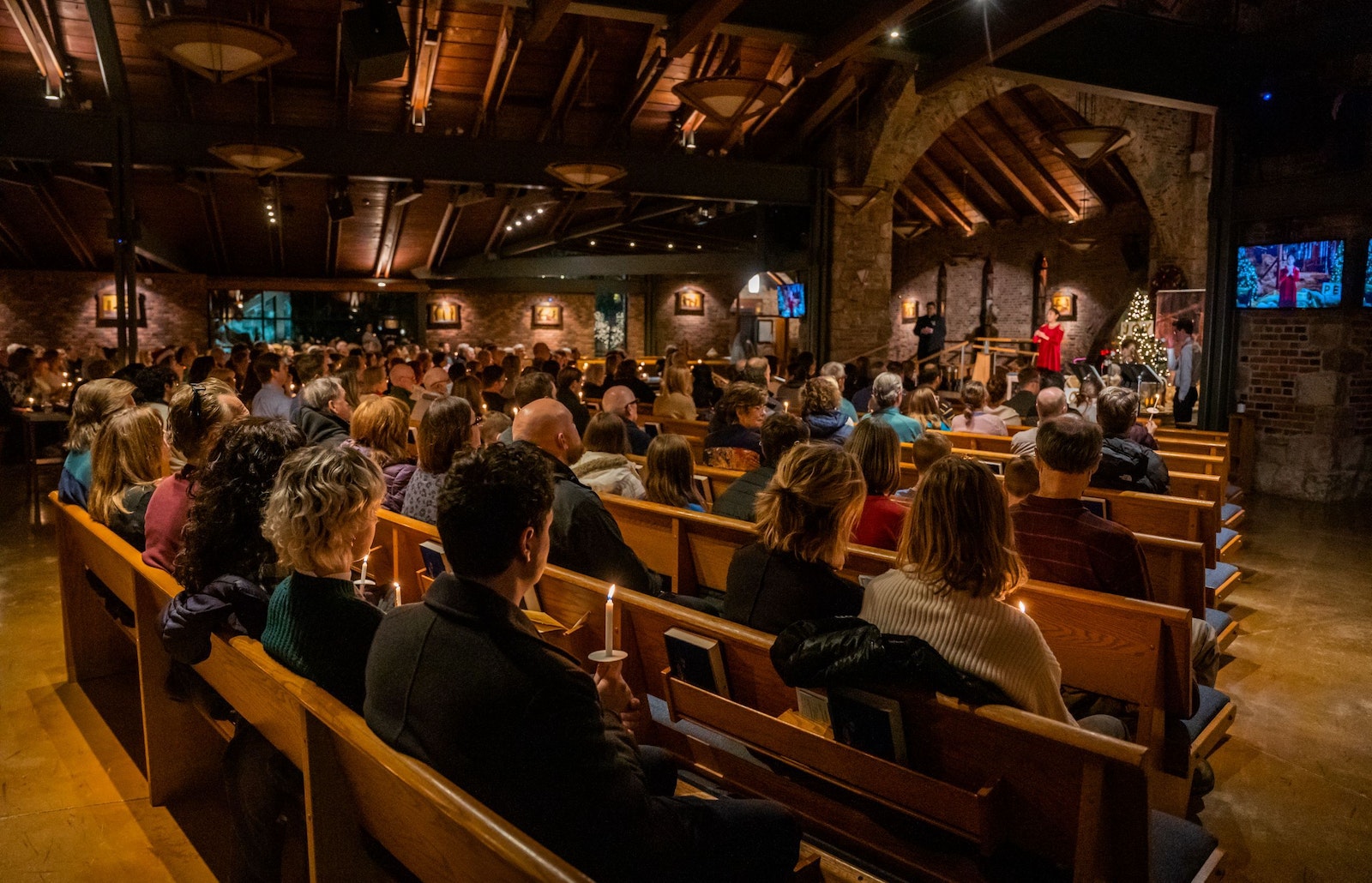 St. Joseph Parish in Lake Orion is filled for a Christmas concert, which was led by students of the parish, Fr. Kean said, many of whom were personally impacted by the Nov. 30 tragedy at Oxford High School. (Valaurian Waller | Detroit Catholic)

“We know at times the way might be difficult, and yet, we are the ones to prepare it,” Bishop Cepeda said. “I’m very thankful, on behalf of Archbishop (Allen H.) Vigneron and my brother bishops, priests and deacons, for all of you and the way you have been able to proclaim the presence of God even in the midst of darkness.

Fr. Kean said students and families at St. Joseph have been processing the events at their own pace, and the parish is there to walk with them, no matter what it takes.

“Many are still at the beginning (of the grieving process),” Fr. Kean said. “It’s so raw. We talk about moving forward, but for many, they’re not ready yet. And so I’ll say, ‘OK, let’s just go to Mass and find peace in that.’”

Asked how community members can help those reeling from tragedy, Fr. Kean said the Church’s answer is always first to pray.

“When it became obvious by Tuesday evening and Wednesday that the whole country was praying for us, it took your breath away,” Fr. Kean said. “The pain that lingers on will be there for a while, but the prayers are still coming. It’s very comforting to know that people are lifting us up, though they may be far away.”

Oxford Bank has set up a memorial fund for victims, their families, and to construct a permanent memorial, in addition to various private fundraisers.

The investigation into the shooting is ongoing, with local, state and federal authorities continuing to interview witnesses and school officials. A 15-year-old Oxford High School sophomore has been charged in the shooting, along with his parents, who were apprehended and arrested Dec. 4. The suspect faces charges of first-degree murder and terrorism, while his parents face charges of involuntary manslaughter.

Detroit Catholic named the suspect in a previous story and is avoiding further mention in order to keep the focus on the victims of the Oxford tragedy.