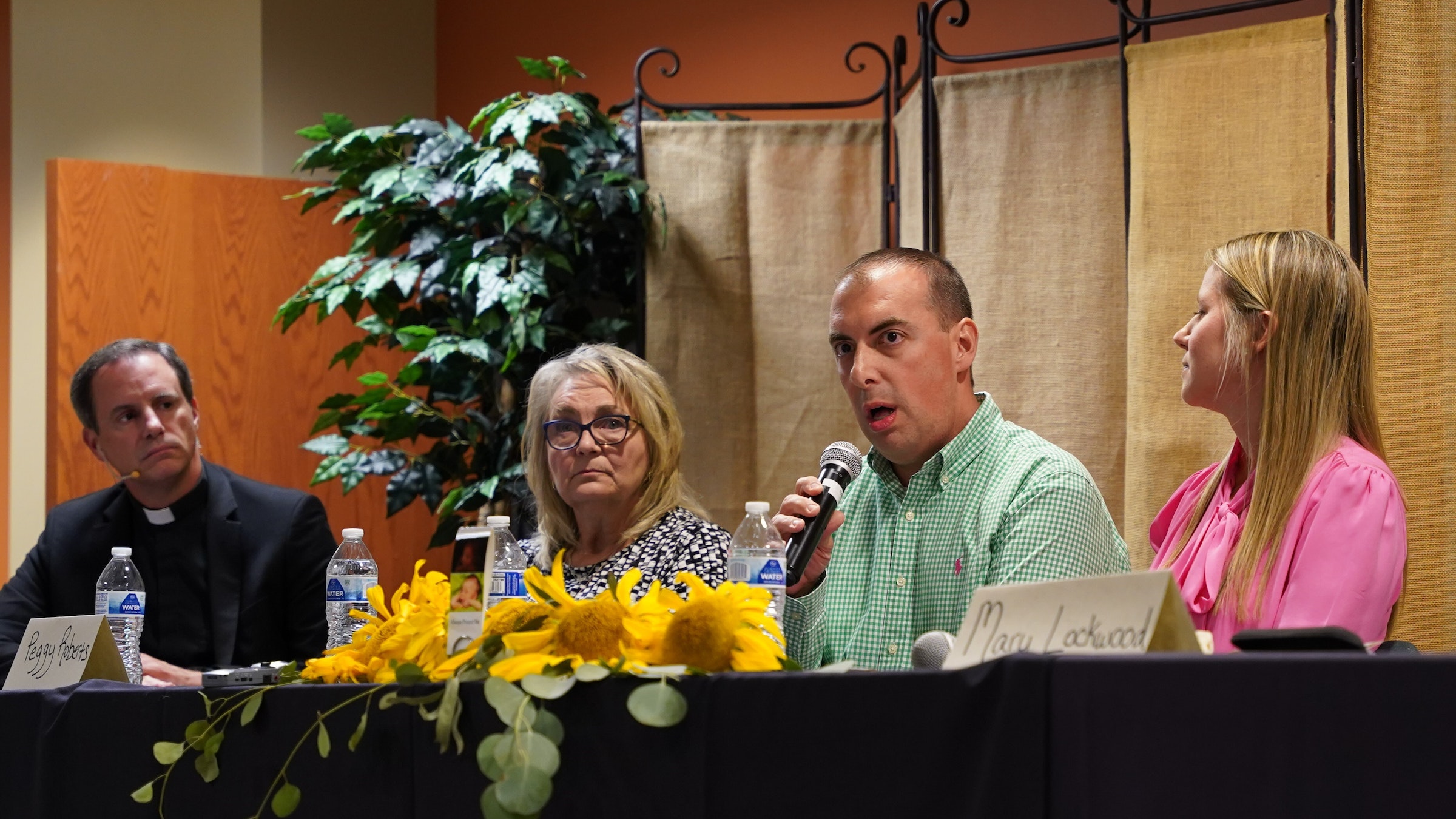 David Ahee speaks during the "Rising Up After Roe" panel discussion Sept. 13 at Our Lady of Good Counsel Parish in Plymouth. David and Nancy Ahee, along with Peggy Roberts of the AAA Pregnancy Resource Center, Mary Lockwood of Project Rachel, Erin Mersino of the St. Thomas More Law Center and Dr. Kathryn Moseley spoke about the implications of Roe being overturned and Proposal 3, which will appear on the Nov. 8 general election ballot in Michigan. (Photos by Daniel Meloy | Detroit Catholic)

PLYMOUTH — Michigan is eight weeks out from an election that features a ballot proposal that would dramatically expand abortion access beyond levels seen even since the 1973 Roe v. Wade decision.

To inform voters who will decide the fate of the Proposal 3 ballot question concerning abortion rights in Michigan, Our Lady of Good Counsel Parish in Plymouth hosted “Rising Up After Roe,” a panel discussion on how Michigan’s abortion laws might change if the so-called "Reproductive Freedom for All" constitutional amendment were to succeed during the Nov. 8 general election.

“We all know the Dobbs case was a great success,” said Erin Mersino, chief of Supreme Court and appellate practice at the Ann Arbor-based Thomas More Law Center and chairperson of the Religious Liberty Section of the State Bar of Michigan, referencing this summer's Dobbs v. Jackson Women's Health Organization decision from the U.S. Supreme Court, which overturned Roe v. Wade. “It brought us to a level playing field, so we no longer have to worry about the ridiculous trimester framework Roe just imaged without any precedent behind it.”

But while Dobbs returned the decision of abortion back to the states, Michigan's proposed constitutional amendment would go far beyond what even Roe allowed, panelists said. 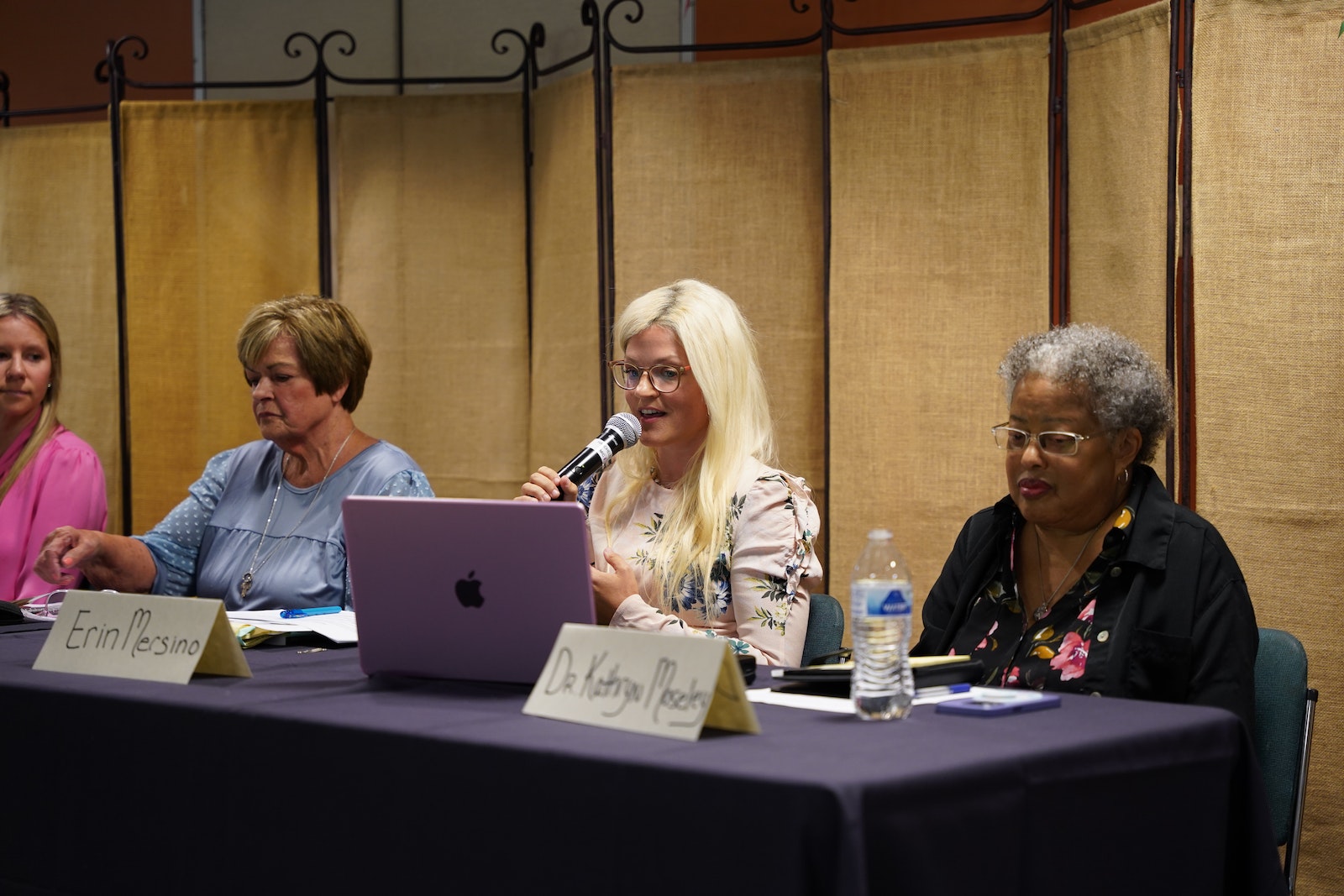 Erin Mersino of the Thomas More Law Center in Ann Arbor speaks about the potential implications should Proposal 3 pass during the Nov. 8 election, including removing parental permission to perform abortions on minors.

Michigan has a proud history of being pro-life, dating to the 1840s, when it banned the death penalty and procedures that intentionally killed an unborn child, Mersino said.

"Michigan is traditionally a pro-life state. It’s the first state to ban the death penalty; I’m very proud of our heritage on life,” Mersino said. “Since 1846, Michigan has never criminalized or prosecuted women or pregnant mothers who had abortions. But it would prosecute abortionists who would abort a child for purposes other than preserving the life of the mother. That is the present law.”

The overturning of Roe eliminated arbitrary timelines for fetal viability, often placed at 20 or 22 weeks gestation, allowing states to look to health care professionals for such definitions, Mersino said.

Dr. Kathryn Moseley, assistant professor of pediatrics emerita at the University of Michigan and a board-certified pediatrician and neonatologist, said placing "viability" at 20 or 22 weeks could lead to some questionable decisions when factoring the developing nature of an unborn child.

“By 10 weeks, a fetus already has little fingernails, little toenails, kidneys are producing urine,” Dr. Moseley said. “But don’t get hung up on the term 'fetus' or 'embryo;' those are developmental stages like babies, toddlers, tweens, teenagers. Those are just names for developmental stages. It doesn’t make them any more human or less human.”

Michigan's proposed abortion amendment would allow unlimited abortion at any time up to birth, even in the second and third trimesters, and supersede Michigan's ban on partial-birth abortions for virtually any reason, including the "mental health" of the mother, Dr. Moseley said.

“I don’t know about you, but what mother doesn’t go through a mental health situation while pregnant? But at 24 weeks, a baby is one pound and moving around; it’s very much alive," Dr. Moseley said. "Our very own associate pastor (at Our Lady of Good Counsel), Fr. Anthony Camilleri, was born at 24 weeks. Wave your hand, Fr. Anthony, and show people what a grown-up 24-week-old looks like.” 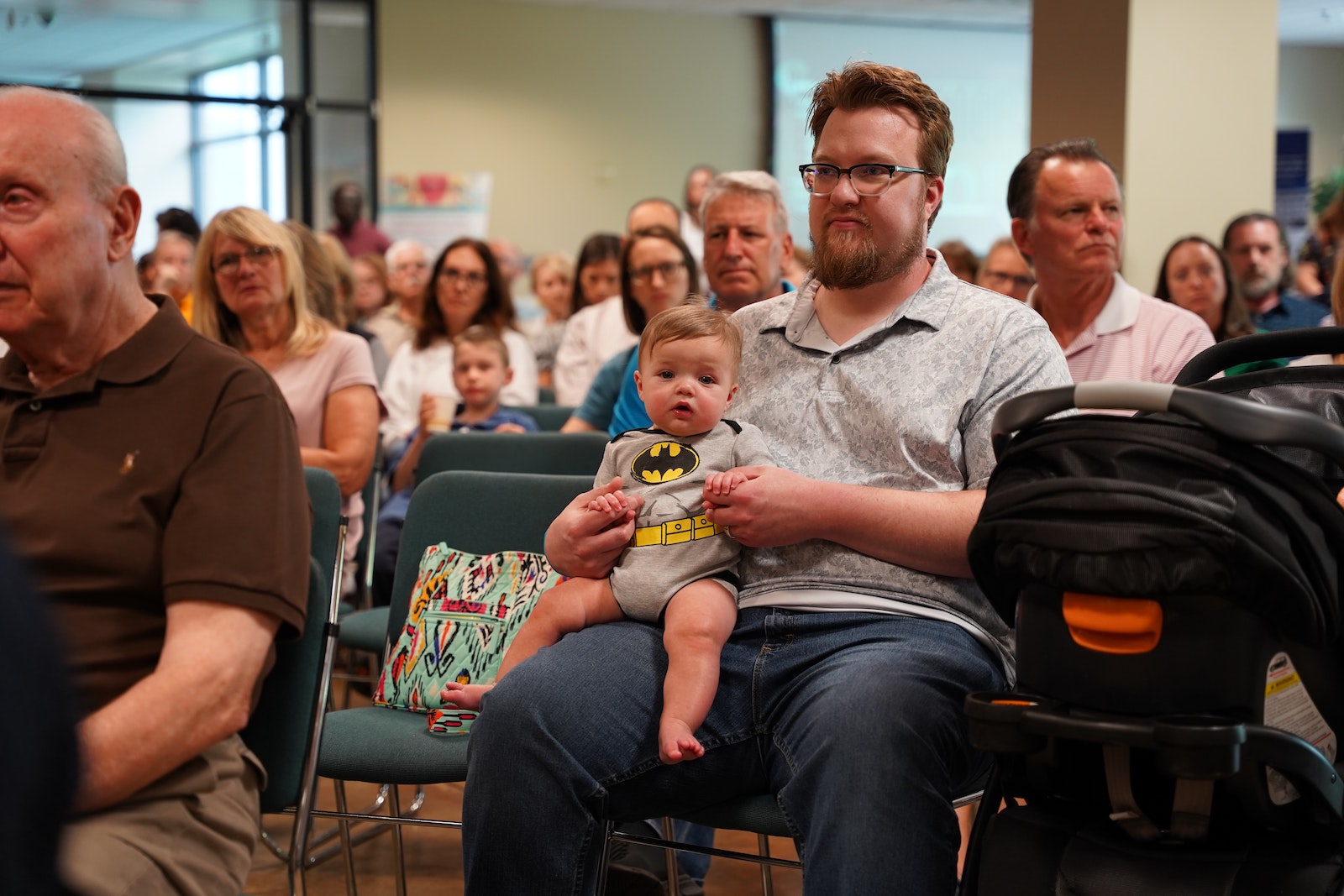 A man holds a baby while listening to a panel discussion at Our Lady of Good Counsel Parish in Plymouth on Sept. 13 on the implications of the proposed "Reproductive Freedom for All" amendment, which critics say would result in the "most extreme abortion law in the country" should it pass on Nov. 8.

Even those who perform abortions recognize the humanity of the unborn child, Dr. Moseley said, citing a survey of obstetricians reflecting on the pro-life movement.

“The majority of obstetricians who perform abortions said what we were saying is absolutely correct, that it a life, it is alive, it does feel pain, that it is a person,” Dr. Moseley said. “The pictures of dismembered babies were on target and right. But they weren’t going to say anything about that, because if women knew this, they would stop having abortions.”

The panel also featured Mary Lockwood, who gave a post-abortion testimony and promoted Project Rachel, a ministry for post-abortive women and men that has a presence in the Archdiocese of Detroit, as well as David and Nancy Ahee, a couple who have adopted children and struggled with infertility.

All stressed the importance of voting "no" on Proposal 3 and encouraged the audience to tell their friends to vote “no.”

“We have the most extreme abortion law in the country standing right before us in Michigan, which has always been one of the most pro-life states,” Mersino said. “It’s now in our hands. Life is truly in our hands. I don’t know if anyone has ever lamented, wished they lived in easier times. But God made us for each and every moment we’re in right now.”

After the panel discussion, Mersino spoke with Detroit Catholic about the laws that would be overturned if Proposal 3 were to pass, including parental consent laws for minors or laws that require abortions be performed by licensed doctors.

“This amendment goes further than where we were before the Dobbs decision,” Mersino said. “This actually greenlights late-term abortion and very barbaric practices that I think even some pro-choice people might object to. If people really understand what it would legalize, they would not want to vote for it.” 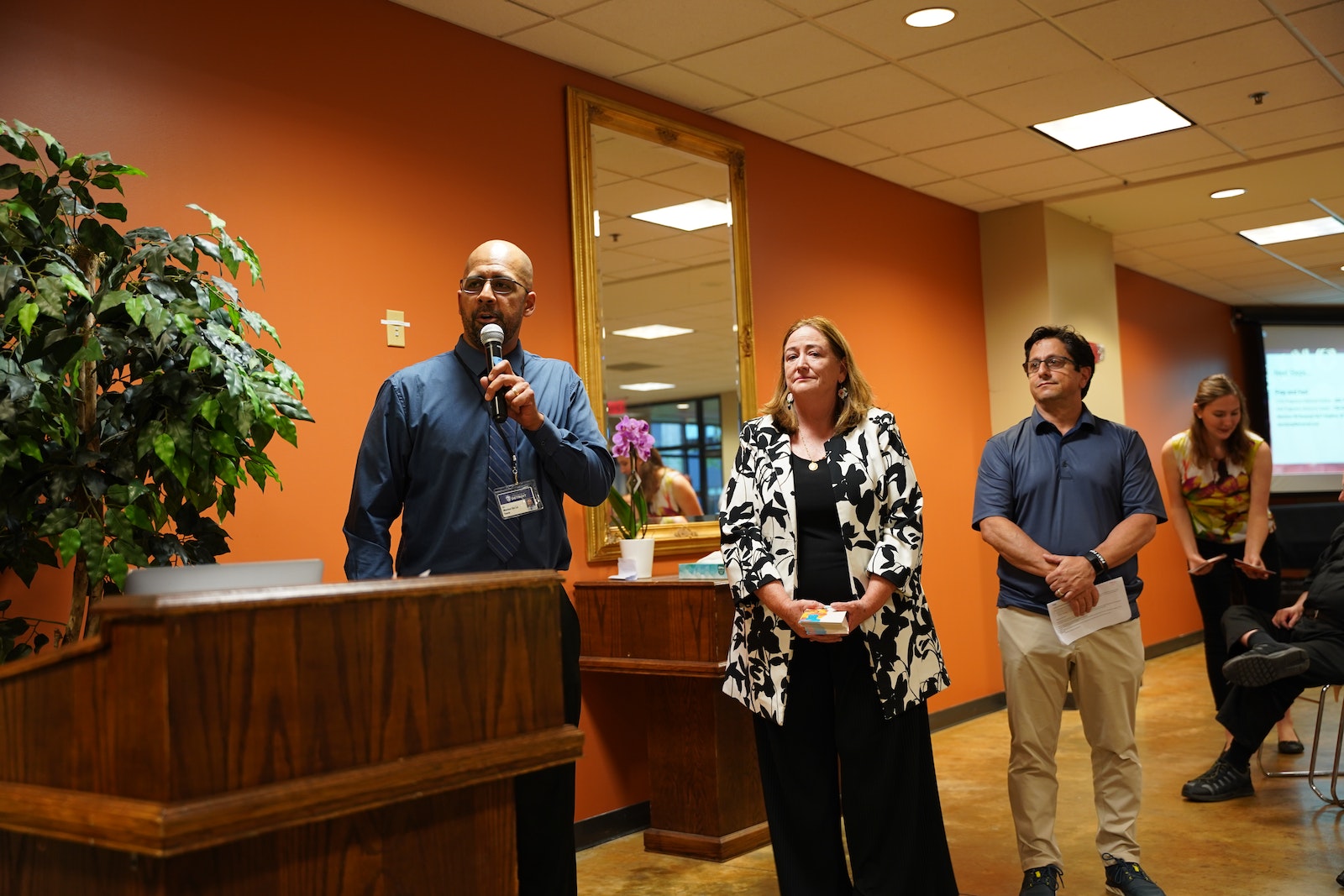 The Michigan Catholic Conference is partnering with the Archdiocese of Detroit and Michigan’s six other dioceses to educate pastors, parishioners and voters about the proposed constitutional amendment.

On Sept. 14, the archdiocese hosted a workshop for priests and clergy on the proposed amendment at Sacred Heart Major Seminary, said Marlon De La Torre, Ph.D., director of evangelization and missionary discipleship for the Archdiocese of Detroit.

"We are working with our priests to educate them and make sure they are prepared and ready to engage the parish and the faithful,” De La Torre said during the panel.

De La Torre said there are "three specific things" the Church is doing to educate voters: clarify the language of abortion and the proposal itself, to teach the faithful about the Church's understanding of life via Sacred Scripture, tradition and magesterium, and to spread the word via every avenue possible.

"Third is to follow through, going on the ground, door to door, face to face, with very direct delivery, intentional evangelization," De La Torre said. "We're speaking about the dangers of this proposition and what it actually offers.”